Having been to Edinburgh a few times in my teens with family, I was keen to do something on this trip that I hadn’t done before. Arthur’s seat is an extinct volcano with a peak 251m above sea level. After walking to the top, you are rewarded with spectacular views over the city. I convinced Dean that this would be a good healthy start to our weekend in Edinburgh, and would balance out some of the indulgences that were bound to occur later on during our stay.

The walk starts near Holyrood palace, where you’ll find a board showing the routes up the hill. We opted to walk up the main route. Even on a cloudy a slightly drizzly February day there were still plenty of other people walking up. There is a lower viewpoint on the way up which gives views over to the sea but not the city. Up until this point, the path is quite good, a few steps in places although a bit narrow. At one point we were stuck in a bit of a queue going up. We do a lot of walking every day but very rarely up hill and so the steepness in places left us hot and out of breath but there were plenty of flatter sections for a bit of a recovery. 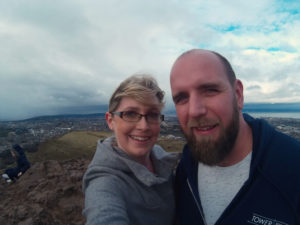 The second part of the climb to the top becomes a bit more of a scrabble at places with it not being clear of the best route to take but we made it up to the top without too much difficulty. At the top, you have panoramic views over the city and to the sea. It was very windy at the top and at times felt a bit precarious but we didn’t see anyone be blown off the top while we were there. 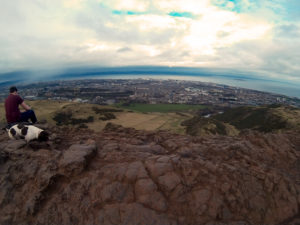 On the way back down, we opted to walk down the grassy slope toward the village of Duddingston. I think probably this route would also be easier to walk up, but would require you to walk around the hill first and probably isn’t such an interesting route, in Duddingston we had a post walk beer at The Sheep Heid Inn which had a few Scottish beers we hadn’t had before. It was a comfortable country style pub and felt like the perfect post walk location. The tables were full and plenty of people had reservations for lunch so I expect the food is really good but we were still full from our hotel breakfast so took an uber back to the centre. 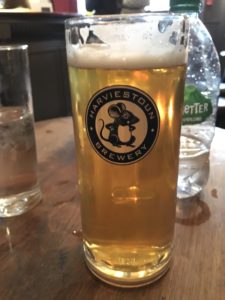 Having told Dean beforehand to pack sensible shoes for the walk, I arrived in Edinburgh realising I’d not packed my walking shoes, instead putting my converse in the bag. I had no problems doing the walk in them and saw plenty of people wearing what looked like less suitable footwear. If it had been any wetter under foot though I do think it would have been difficult. We went up and down in just over an hour, but we have a tendency to storm up a hill with no breaks! If you were completing it at a more leisurely pace, it would probably take around 1.5 hours. We definitely recommend it if you’re planning a trip to Edinburgh.