Over the last few years as we’ve got more and more into our food, paying attention to the top 50 list and the michelin guide, its been hard to miss the prevelance of the Basque region in Spain, and in particular the town of San Sebastian. After Kyoto, San Sebasitan has the second highest number of michelin stars per capita in the world and it had been on our to visit list for a while already.

As well as being a destination  for eating quality food  and drinking great value cava and gin, being a beach town, its also a destination for families and surfers and is a great town for walking around. We definitely plan to come back in the future and spend more time in San Sebastian as well as the rest of the Basque country. 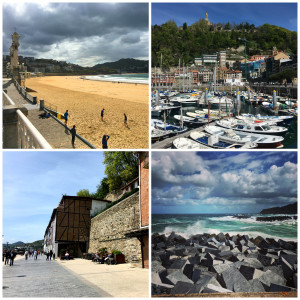 We went pretty much all in on the trip and ended up enjoying 9 stars in 3 days, more on the restaurants later! Aside from the Michelin starred restaurant scene, the other must have in this town is pintxos. Pintxos is simply the basque word for tapas, but the way they served them was very different to how I’ve eaten tapas in Madrid. In San Sebastian, and I believe across the Basque region, the pintxos are out on the bar. You take a plate, pick what you fancy and then show to the barman to pay. We found on average each item was about 2 euros and extremely delicious! We followed a pattern of going to a few bars, picking a pintxo in each to go with our (equally cheap and delicious) glass of wine before moving on to the next spot. While you can find pintxos all over, we found the highest concentration in the old town, around the streets of Arrandegi Kalea and Inego Kalea. 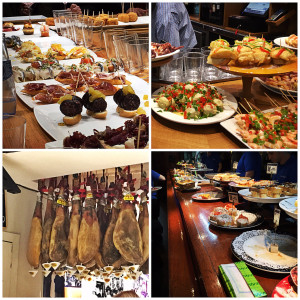 Not in San Sebastian, but still in the Basque region, just outside Bilbao, Azurmendi is a 3 starred restaurant which in 2015 was featured at number 19 in the top 50 list. This was the restaurant hubby was most excited to visit and he said it was a good thing that I hadn’t read too much about it before our visit so I was very intrigued! The building is a strikingly modern glass and steel structure in a hillside, and in the grounds, they grown their own vegetables and herbs and keep it environmentally friendly using geothermal and solar power for their greenhouse. Rather than walking in and being seated at our table, we started the meal with a glass of local wine and a picnic in the huge atrium of the restaurant before being taken into the kitchen and the herb garden. 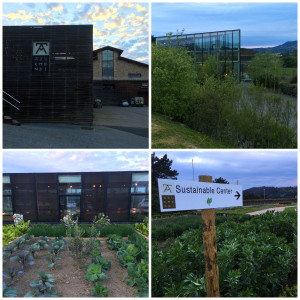 Once seated, we were struck by the dining room design. We thought it was one of the best designed we’d been in. There is a lot of glass in the design although unfortunately the restaurant overlooks the main road. One of the first courses was Azurmendi’s most famous dish, Egg cooked inside out and truffled  – they remove part of the yolk, inject a truffle consume and the egg gets cooked from the inside out – amazing! The great food kept coming, other highlights being the peas and roe and the roasted lobster.

When it came to ordering the wine, we were very happy to find the sommelier could recommend a biodynamic wine as hubby can’t have too many sulfites. We were even more happy to find that the bottle cost 35 euros. This was common in all the restaurants we visited, with all the recommended wines so no surprises when the bill came.

Hubby and I are both fast eaters, but we find in restaurants like this, there is normally a gap of up to 10 minutes between courses, however we found that in restaurants in this part of Spain, as soon as we were done with one course, the next course came. Over the weekend we soon learnt to purposefully take our time, which I know we should be better about anyway!

We headed over to San Sebastian for 2 nights, arriving just in time for lunch at Arzak. As we went in, we caught the manager of Real Sociedad having a photo op with the chef before heading into the private dining room for a pre match lunch.

Arzak had been the restaurant I was most excited about, I guess it was the one that I’d heard most about beforehand. It’s been a family run restaurant for years, with the day to day operations now headed up by Elena Arzak, alongside her father Juan Mari. They walked around the tables during the meal so we got to say hello to them both, although you could tell that Elena handled the small talk on the foreign tables! 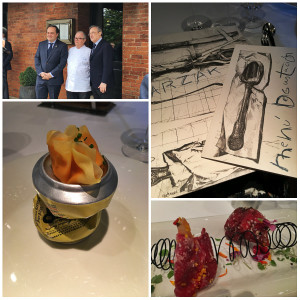 In Arzak we found that the dishes were not only deliciously tasty, but also the presentation was much more striking like a piece of art on the table. Highlights for me had to be one of the amuse bouche’s – “Txistorra” with beer and mango which came served in a crushed beer can, the red space egg – a fried egg covered with a film of peppers and other yummys and the red mullet, served on an ipad showing the sea!! 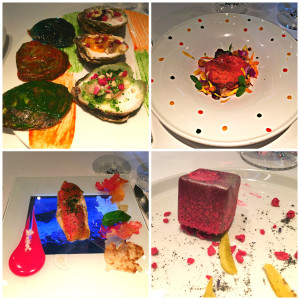 We learnt our lesson about pacing ourselves during the meal and again enjoyed very reasonably priced wine and left the restaurant after another memorable meal that met all our expectations of eating in San Sebastian.

Our final fancy restaurant of the weekend was booked after we couldn’t get a table at Murgaritz (one of the top ten in the world) and as it turns out we were very happy with our choice. The restaurant is situated just outside of the town centre, set in a hill with stunning views over the sea. The perfect backdrop to a very fish heavy tasting menu.

The location of this restaurant was definitely the most stunning of the weekend and the quality of food didn’t let it down either. It was here that I had what was my favourite dish of the weekend, “Pasta Carpaccio, Piquillo and Iberic with Parmesan shrooms.” It was a dish which looked and tasted like a slice of meat but was actually pasta. Delicious and memorable! Other highlights were red mullet, served with fusili shaped sauces and an apple desert which came wrapped in edible Akelarre paper. 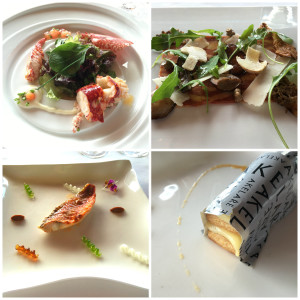 We finished off our lunch with a gin and tonic on the terrace outside, taking in the beautiful views.

Azurmendi is pretty much in the middle of nowhere. There are two options, first to stay in Bilbao and take a taxi to and from dinner, or second to stay at the hotel Miamendi, a bed and breakfast which on a map looks like it is right next to the restaurant, but in reality requires you to walk down and then back up a very steep slope which is not too bad in the day time, but was not ideal when we came out after dinner in the dark. We stayed at Miamendi and found it to be perfectly adequate for our one night stay. It’s a family run place, we were lucky when we checked in that the owner’s daughter was there to help us out when my Spanish wasn’t up to the mark and in the morning, the owner fed us a feast for breakfast which was delicious but not the ideal start when you are heading off for a big lunch! It’s worth noting that there is nothing else in walking distance, so worth going prepared with some  bottles of mineral water (we read that drinking the water is not recommended for out of towners).

In San Sebastian, we stayed at the beautiful Hotel Maria Cristina, a Luxury Collection hotel by Starwood. The hotel offers classic luxury and a fantastic cocktail bar, the perfect place to start or finish your evening in San Sebastian, whether you’re staying at the hotel or not. We would definitely return on our next stay in San Sebastian. 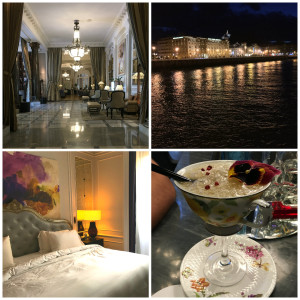 Although San Sebastian does have it’s own airport, there are no flights directly there from outside of Spain. From the UK and other European destinations, your best bet is to fly to Bilbao, or to Biarritz in France. Both airports have a bus link with San Sebastian, although on the way back we found the one to Biarritz was somewhat irregular. As we were flying into Bilbao and out of Biarritz, we opted to hire a car from Bilbao, drop it in San Sebastian and then used a (very expensive!) taxi to get to Biarritz when we left. When we visit the region again, I would probably fly in and out of the same airport and hire a car for the duration of our stay.

One response to “Eating around San Sebastian”