After spending a week in Rio for the Olympics, we knew that we would want the second week of our holiday in Brazil to be about pure relaxation. We asked a Brazilian friend for her tips and she recommended we visit Pipa, a small relaxed beach town in the North East, close to Natal. The vibe in Pipa is very chilled, just one street running behind the beaches which are popular with surfers and families alike. It’s worth noting that we went in low season – August, and our decision to go so far North was partly due to wanting guaranteed sunshine and we weren’t disappointed on that front.

By day, the beach is the place to be and there are plenty to chose from. From the main road, you walk down to Praia de Pipa itself. At low tide, lots of little rock pools are exposed providing a calm spot to relax in the sun and at high tide there is very little sand to walk along.  All along the beach there are plenty of barracas to chose from – businesses hiring out chairs and umbrellas and selling beers and ice creams along the beaches. 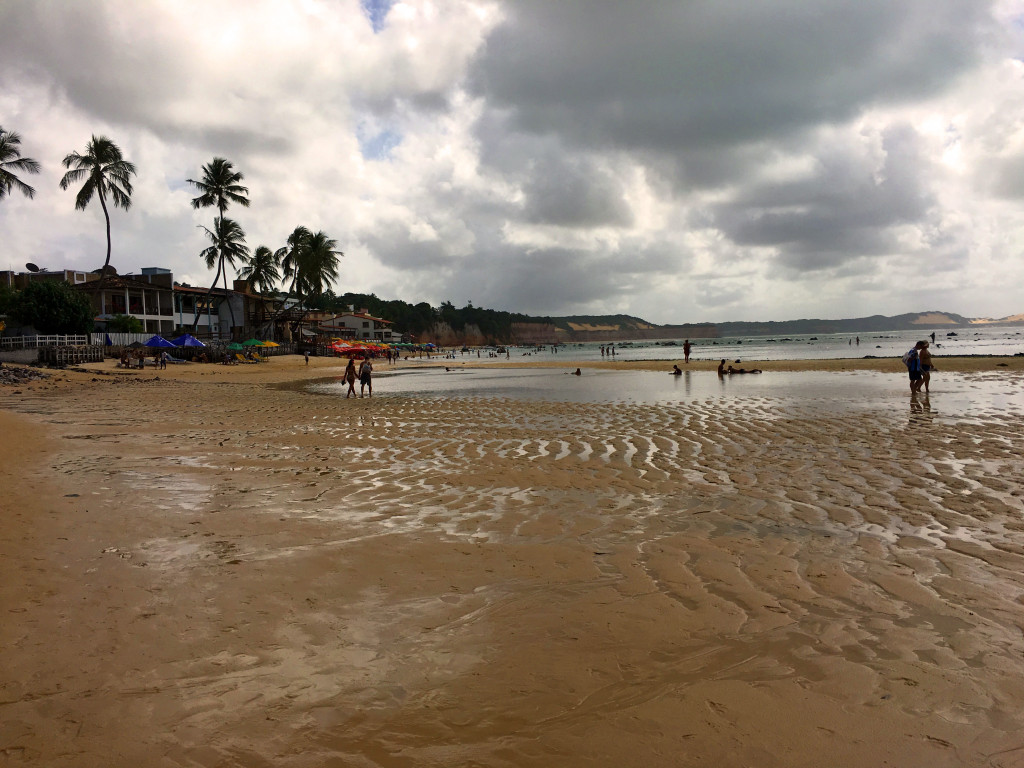 The next beach to the North of Pipa, Baia dos Golfinhos, is not acccesible from the road hence you need to plan your trip carefully to be sure you don’t end up stranded by the tide. Here as well there are plenty of barracas to chose from. The beach is long enough that if you continune walking past the crowds, you can easilly find your own secluded area of beach to relax on. The really special part about this beach, and there’s a clue in the name here, are the dophins that can be spotted swimming in the bay. They come very close to the shore and so you can see them right up close without needing to spend money on a boat trip, although of course there are plenty of companies offering such trips. 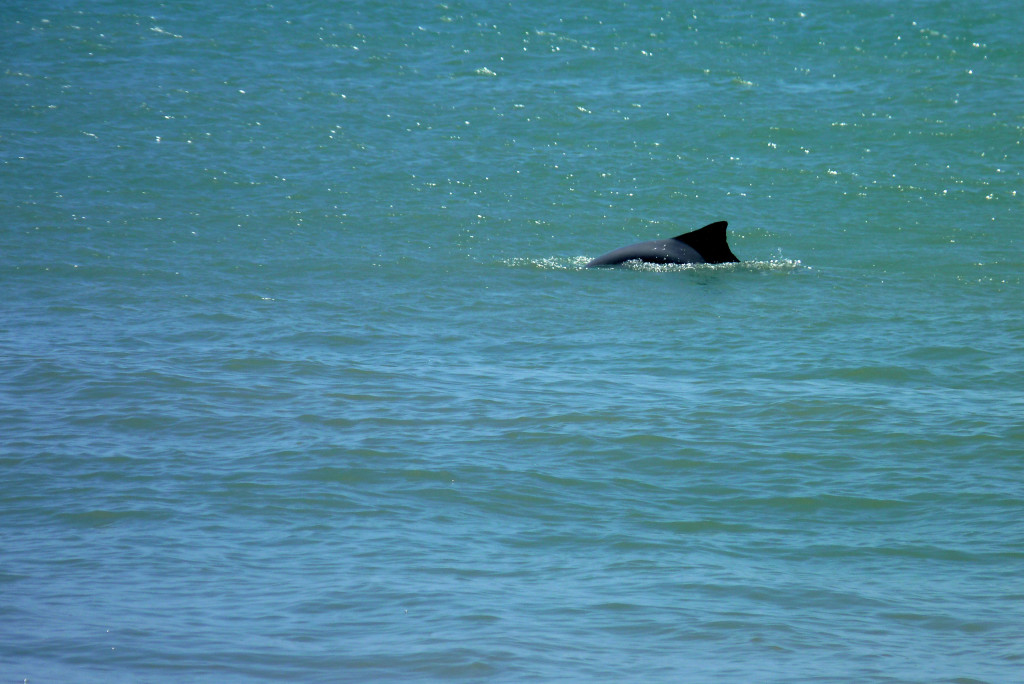 The reason that Baia dos Golfinhos is not accessible from the road are the cliffs behind the beach which are one of the features that makes the beaches in the area so stunning and one for which they are famous for. 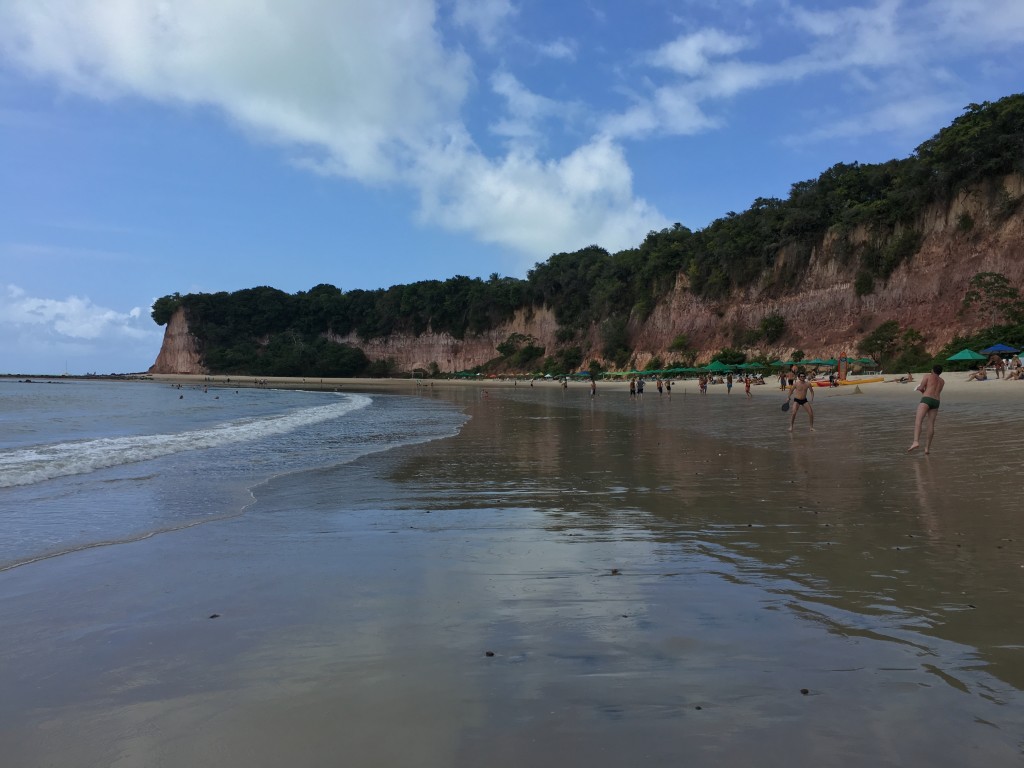 Heading further north, the next beach is Praia de Madeiro. This is the longest of the beaches and while there are a few baraccas at the South end, we hardly saw any other people along this stretch of beach although that could just be down to the fact we were there in low season. 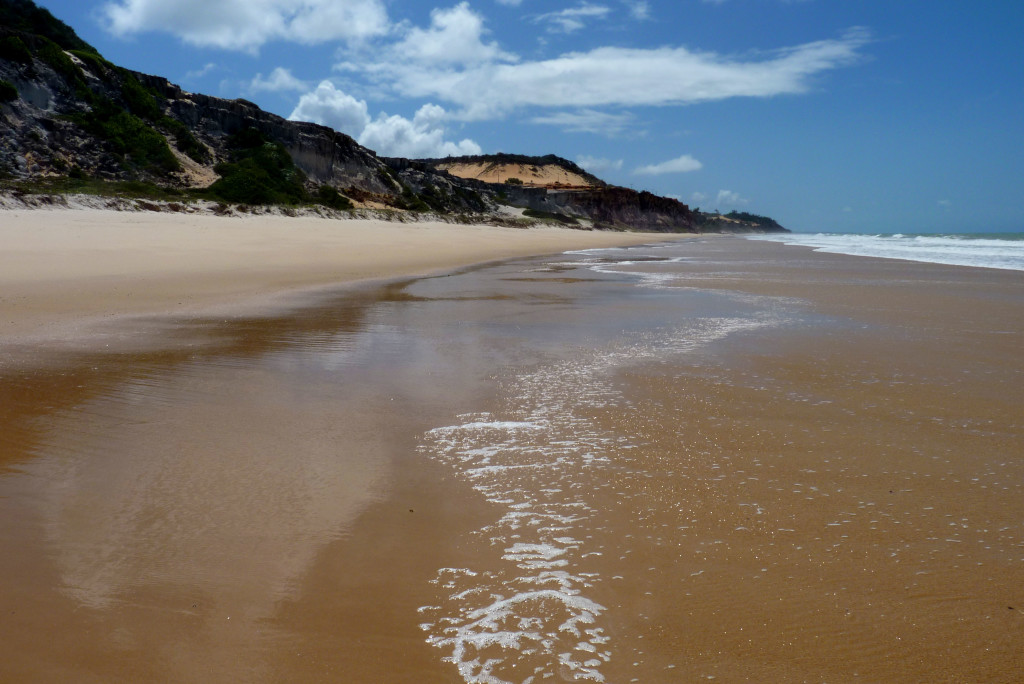 We walked all the way up to the town of Tibau do Sol which we had hoped would provide us with some bars to refresh in after a long walk but were disappointed – while there are a few hotels, there was really nothing there. I wonder whether in high season it acts as an overflow for accommodation for those visiting Pipa. We did go back later though for sunset at Creperia Marinas which was a beautifully calm spot and worth the taxi ride from Pipa. 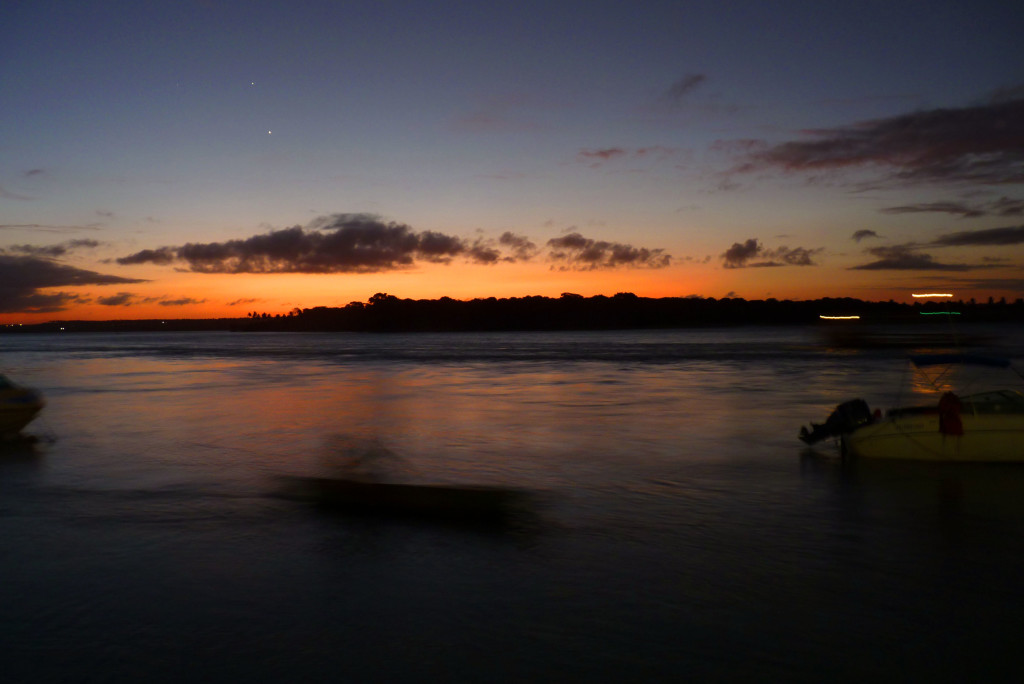 For those who enjoy being active on holiday, Pipa has plenty to offer – kayaking,  surfing or buggying along the dunes. We took a more laid back approach, with the only activities for us being a bit of walking and swimming. There is plenty of nature to be enjoyed in the area with pockets of unspoilt Atlantic forest. The hotel we picked, Toca da Coruja, has in fact gone to the efforts of allowing the forest to grow naturally around the property which meant that we didn’t even have to leave the poolside to see native monkeys, birds and frogs passing by. There’s also an ecological park with a variety of trails through the forest to cliff top views of the beaches from where if you’re lucky you might see turtles or dolphins. 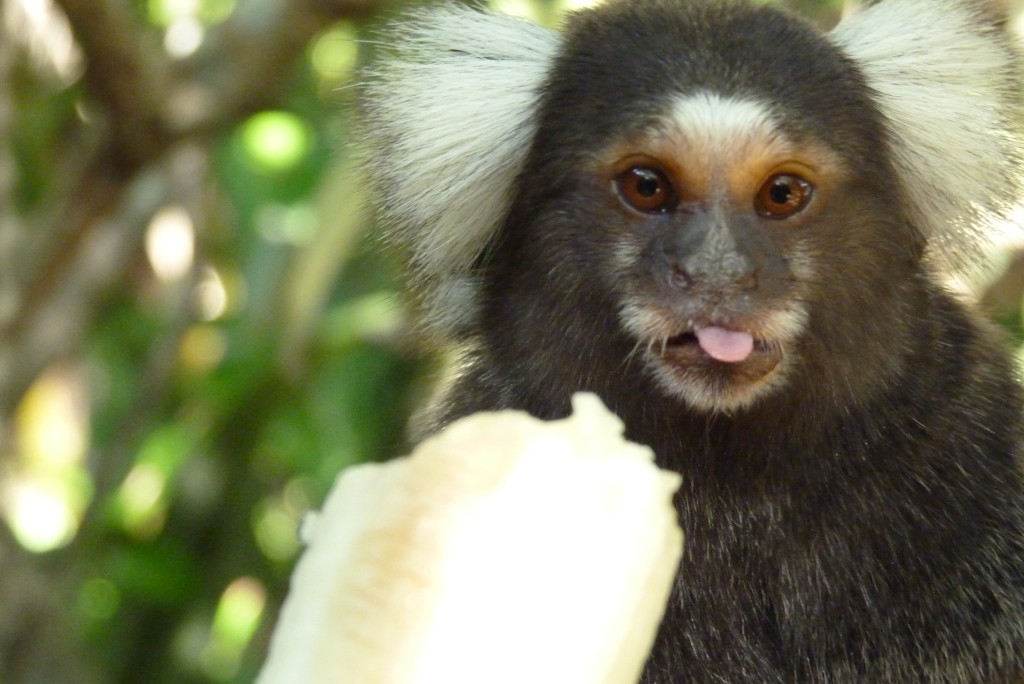 By night, the main street of Pipa comes alive. Surprisingly for such a tiny town, the density of stylish cocktail bars and amazing restaurants is very high. Our favourite place to start the evening had to be watching the sunset from Mirante de Pipa with a Caiprinha in hand. 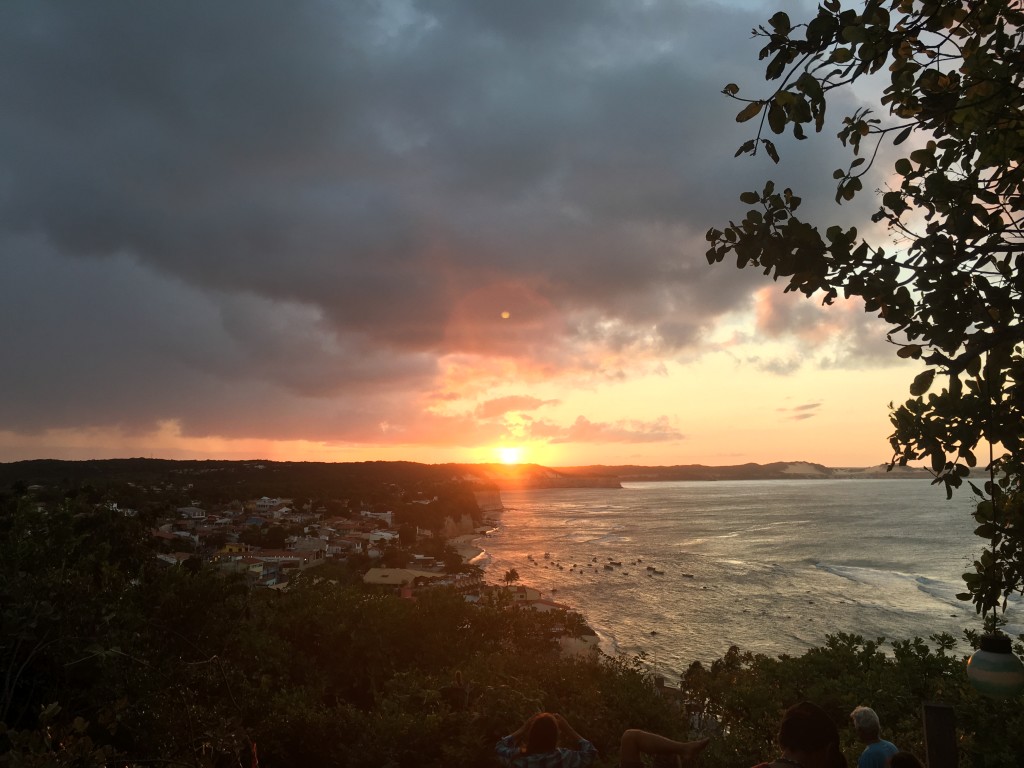 Like many tourist destinations around the world, along the main street, there are people outside tempting you into their restaurants, but with a little bit of research we found some of the best places where the food spoke for itself.  For starters, our hotel had an amazing restaurant, Oca Toca where we enjoyed delicious fish wrapped in banana leaf and sun dried steaks. Walking along the main street we spotted a restaurant on the first floor, which was open at the sides and looked like a nice place to sit. On further investigation it turned out it was the number 1 place on trip advisor at the time – Golde’s restaurant. Run by two German’s, it had a mixed menu of European, Asian and Brazilian while still serving up quality food. The owners came over to talk to us and we learnt from them that they don’t get too many European visitors as Pipa is still somewhat of a South American secret. The third great restaurant we visited was much more traditional (and cheaper!) than the other two and was tucked away a little off the main street. O Tal do Escondidinho served the local speciality of a kind of gratin, made with cassava and served up with the Brazilian staples of rice and beans. It was really nice to enjoy something more traditional and less touristy. 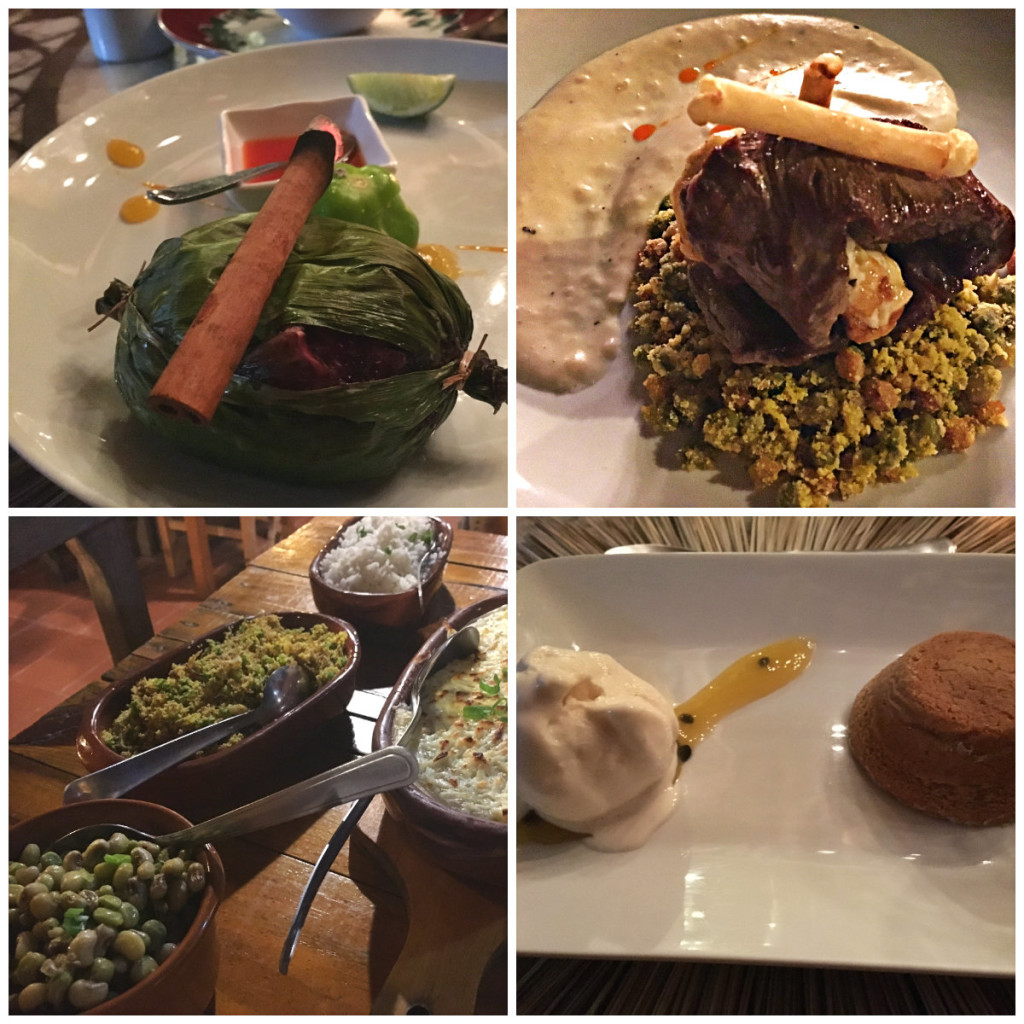 Before going, I had expected that Pipa would have a bit more of a backpackers vibe, and although there were some hostels and cheaper guesthouses around, there was also plenty of luxury options in Pipa. I think also the fact that it is not really on the radar of Europeans and perhaps South America is a less popular destination for backpacking, it has not become established on any backpacker trail. For us it was the perfect combination of luxury hotel with quality food around, but also a wide variety of bars from dive bars to stylish cocktail bars. We wouldn’t hesistate to recommend it to anyone looking for a relaxing beach destination in Brazil.

One response to “Relaxing in Pipa”