As an avid follower of the Top 50 restaurants list each year (even though I disagree with quite a few of the rankings!), the Test Kitchen in Cape Town had been on my radar long before we planned our trip to South Africa. As is common for places on “the list”, reservations require some planning. Bookings open at 8am SA time on the 1st of the month for the following month. This meant I was up at 6am in the UK to secure our booking! If you’re planning a visit and don’t want any surprises ruined then stop reading now as this post will definitely contain spoilers.

On our visit in April 2017, the Test Kitchen experience was divided into two rooms, the dark room and the light room. We started off in the former, a relaxed atmosphere where we were served cocktails and ten different snacks. The snacks were divided into courses, so at any one time we had up to 3 different snacks on the table. 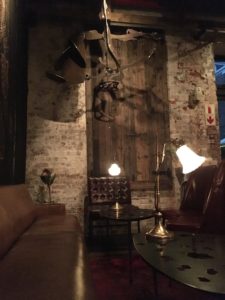 The very first snack we were served was the Test Kitchen Millionaires shortbread which was actually a savoury bite, made with liver pate. This was followed by warm pine nuts, biltong and a bombay crisp. I’d never had pine nuts served warm as a snack before and they were really nice. The biltong was as you Might expect, full of flavour with a great texture and the Bombay crisps really captured a lot of flavour and were in the words of Dean, “super savoury”. 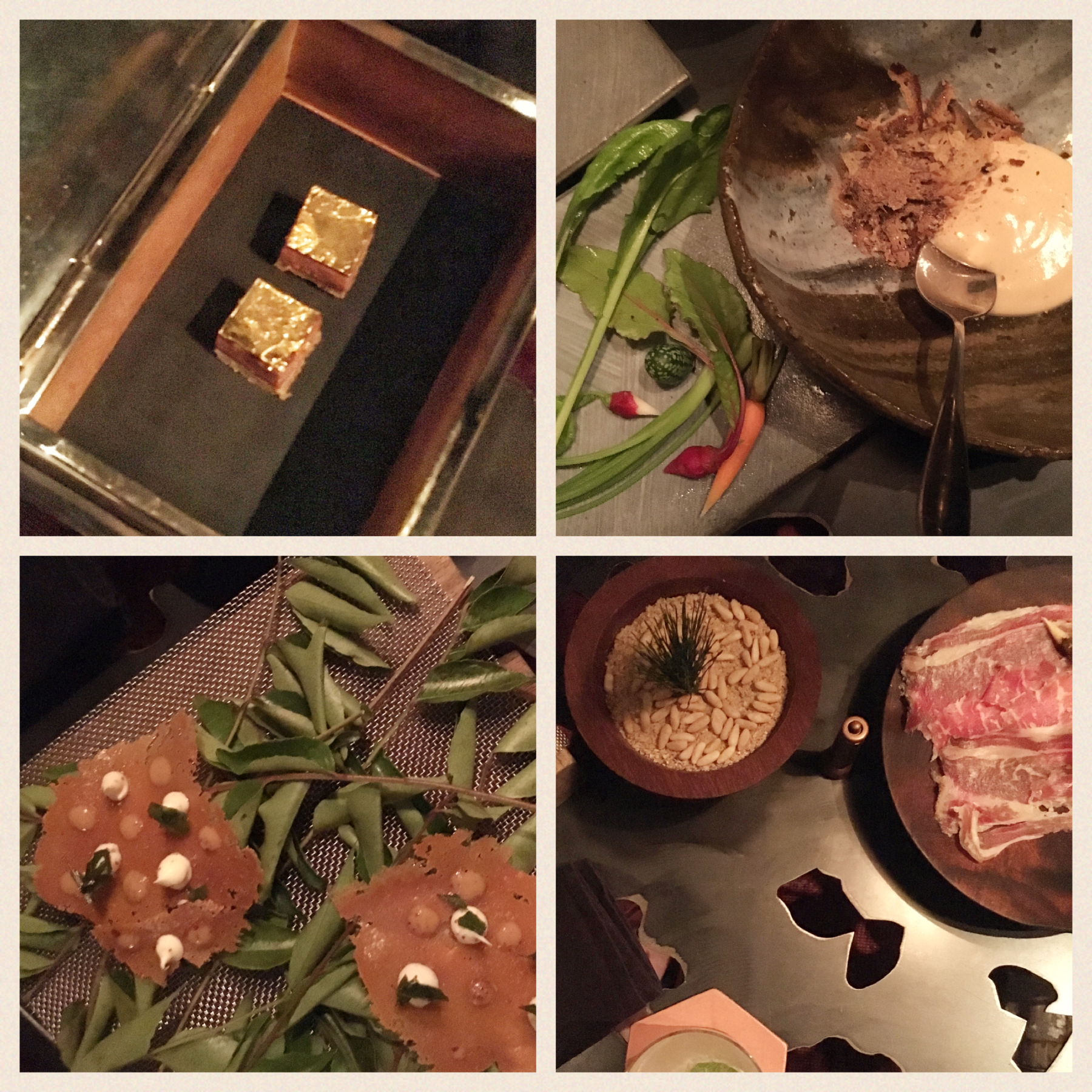 The next set of snacks represented an afternoon in a pub, pork scratchings and guiness followed by a cheese ploghmans. The pork scratching a were huge and were so light they were almost like a meaty flavoured popadum. The Guinness was in fact a flavoured cream to dip them into. The ploughmans was a one bite affair and had all the flavours you would expect including the pickle. This set was our favourite in the dark room. 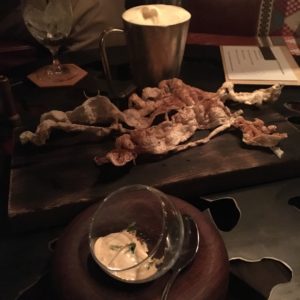 The meaty snacks consisted of a Peking quail sandwich and smoked lamb on a ginger wafer. The textures in the quail bite were perfect, tender quail contrasting with the crisp outside. I was a bit disappointed by the lamb as it was lacking in flavour compared to everything up until this point but I think this is due to the fact I had an alternative sauce (tofu) as the XO dressing contained nuts. We finished off in the dark room with a ships granite, cucumber and sake palette cleanser, with a good lashing of dry ice added at the table. 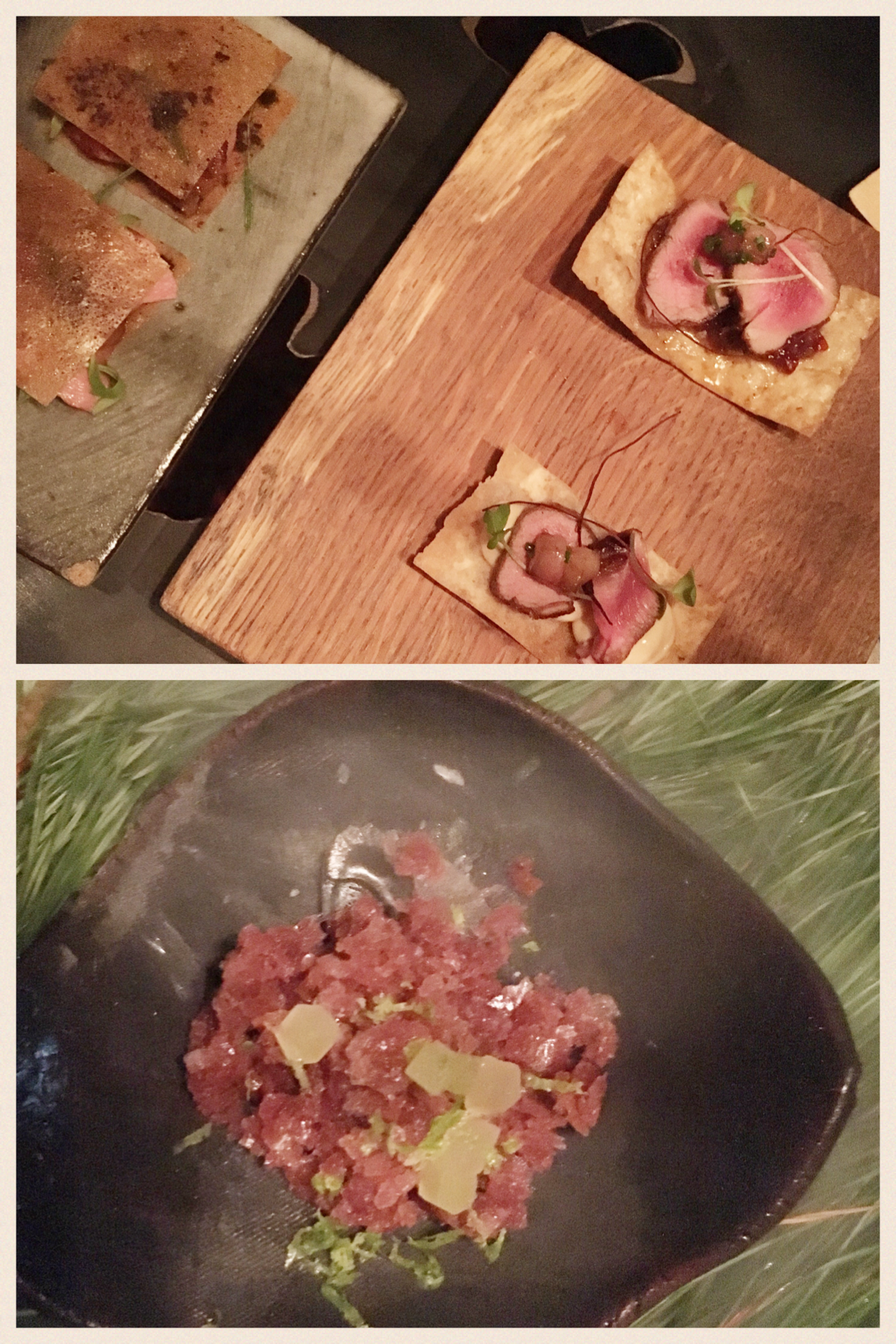 After our feast of snacks was complete, it was time to head through to the Light room where we would receive a more traditional meal experience. We were excited to see what would follow given the flavours we had already experienced. On making our booking, I had a choice of seating, either Bar or Inside. I wasn’t really sure what either was but went for bar and was very happy with our front row view of the kitchen. I really liked the style of the dining room, very relaxed but stylish. There’s no need to dress up to dine here, it’s all about the food and having fun, no pretensions. 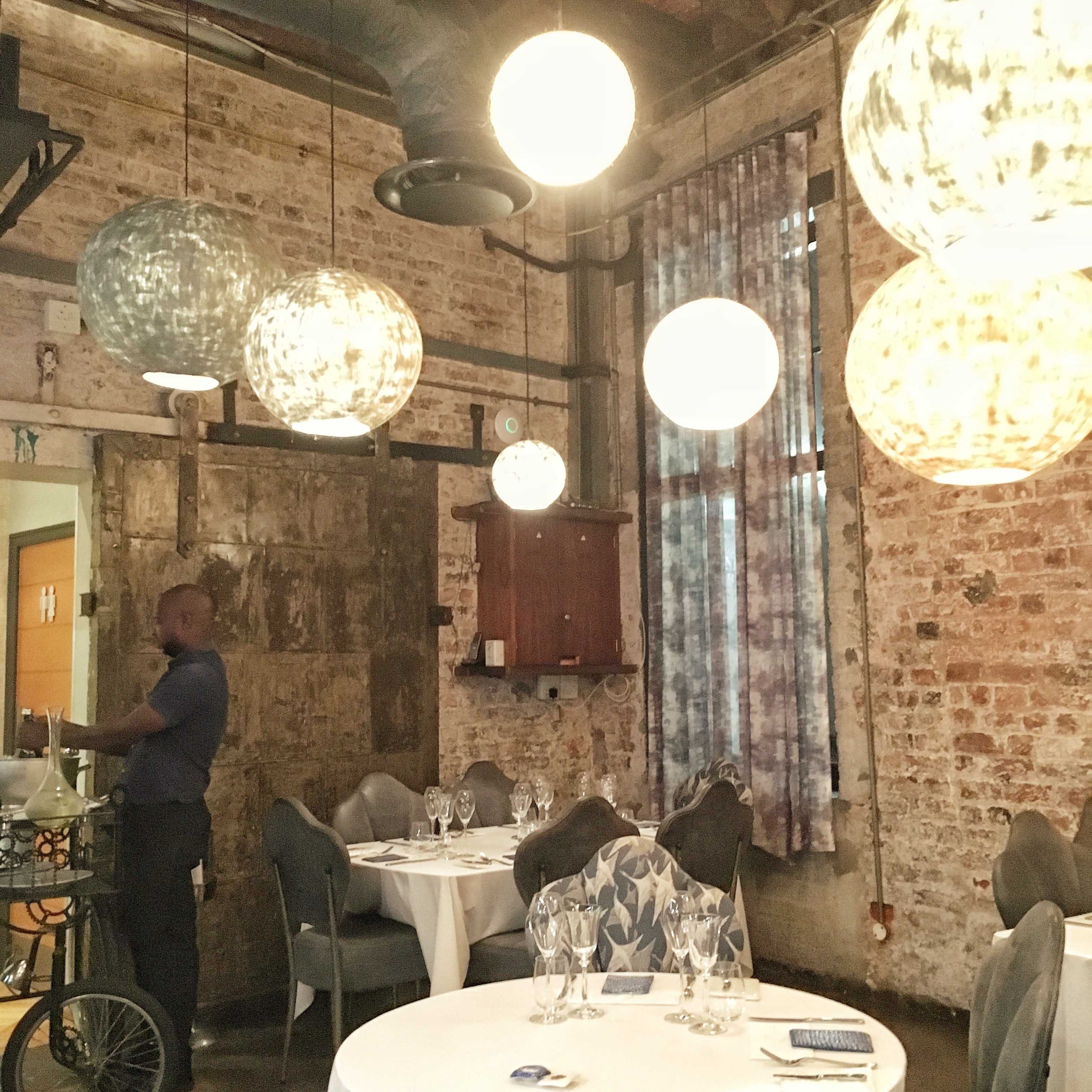 As soon as we sat down, we were brought a glass of fizz from Stellenbosch, along with an appetiser of a fish paste and roe and a selection of warm breads, a country loaf, cheese and leek and sweet potato. I liked that they brought them all up front as you could mix and match with the different courses as you went through the meal. 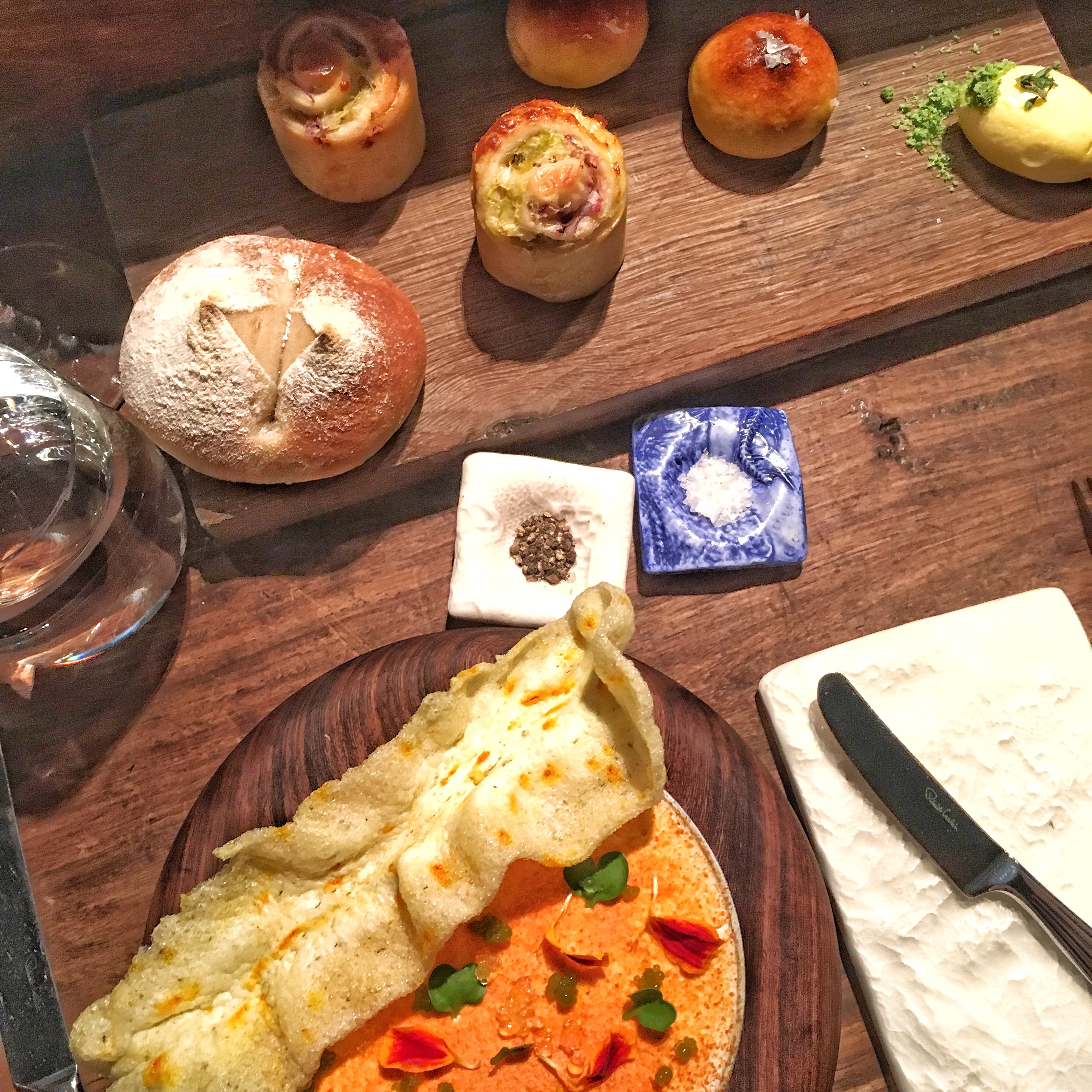 Although we’d already had so much food, it was only now that we started with the seven course menu. There was one choice to be made, either lamb sweetbreads or scallops and we each picked something different. The first of the seven courses was trout tartare, homemade sour cream, lemon verbena oil, dill oil. The flavours in this dish were spot on. 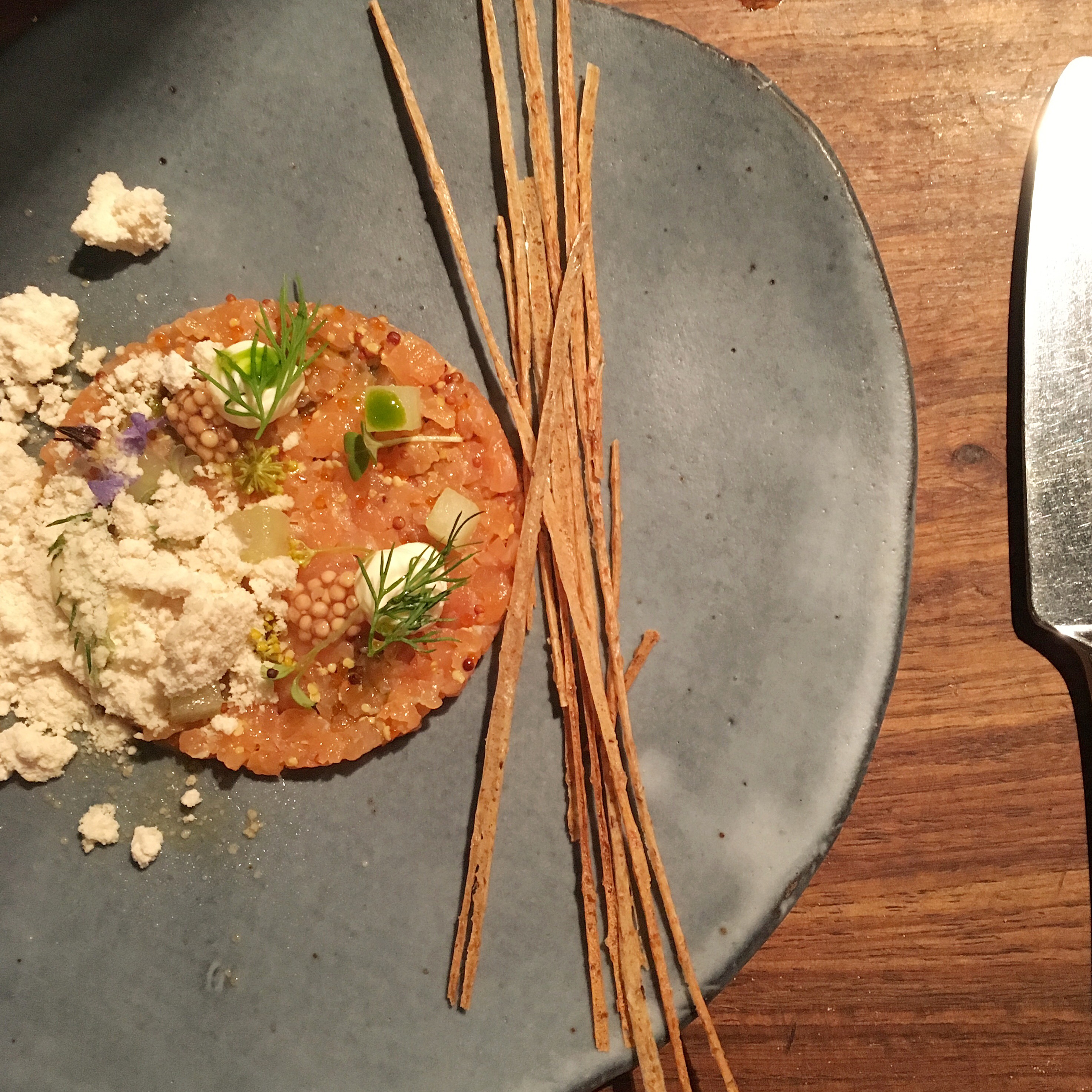 The TTK tuna nicoise consisted of perfectly seared cubes of tuna, fish jelly, asparagus, potato cream and drops of dressing. I’d eat a lot more salad if it was always served like this! 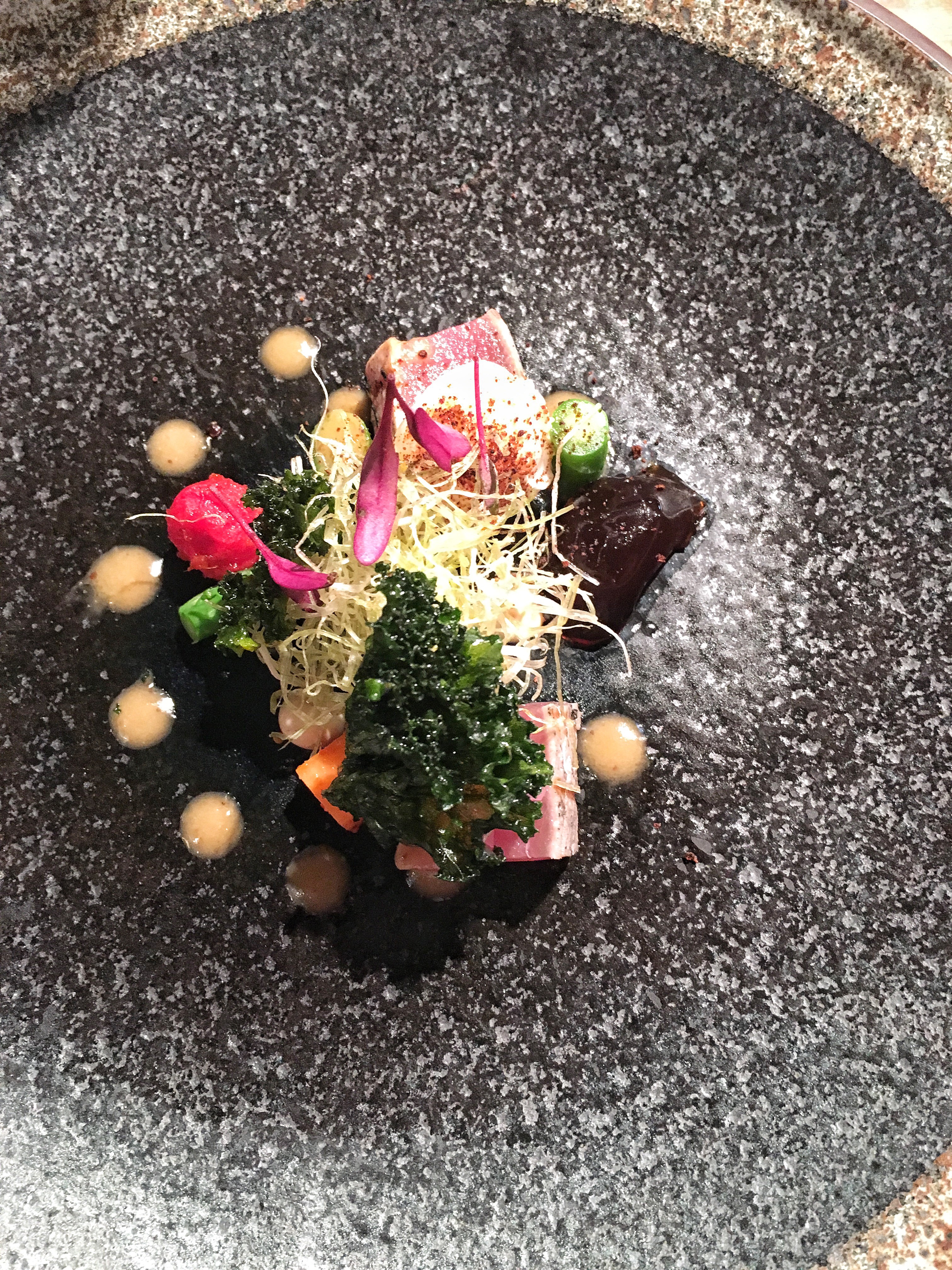 I’m never really sure what sweetbreads are, but know they are always full of flavour. They were served with liquorice liver jus, lime gel, preserved lemon and pinenut gremolata. On paper I wasn’t sure about some of the flavours, especially the liquorice, but in reality it was stand out noticeable and the dish was another delicious one. 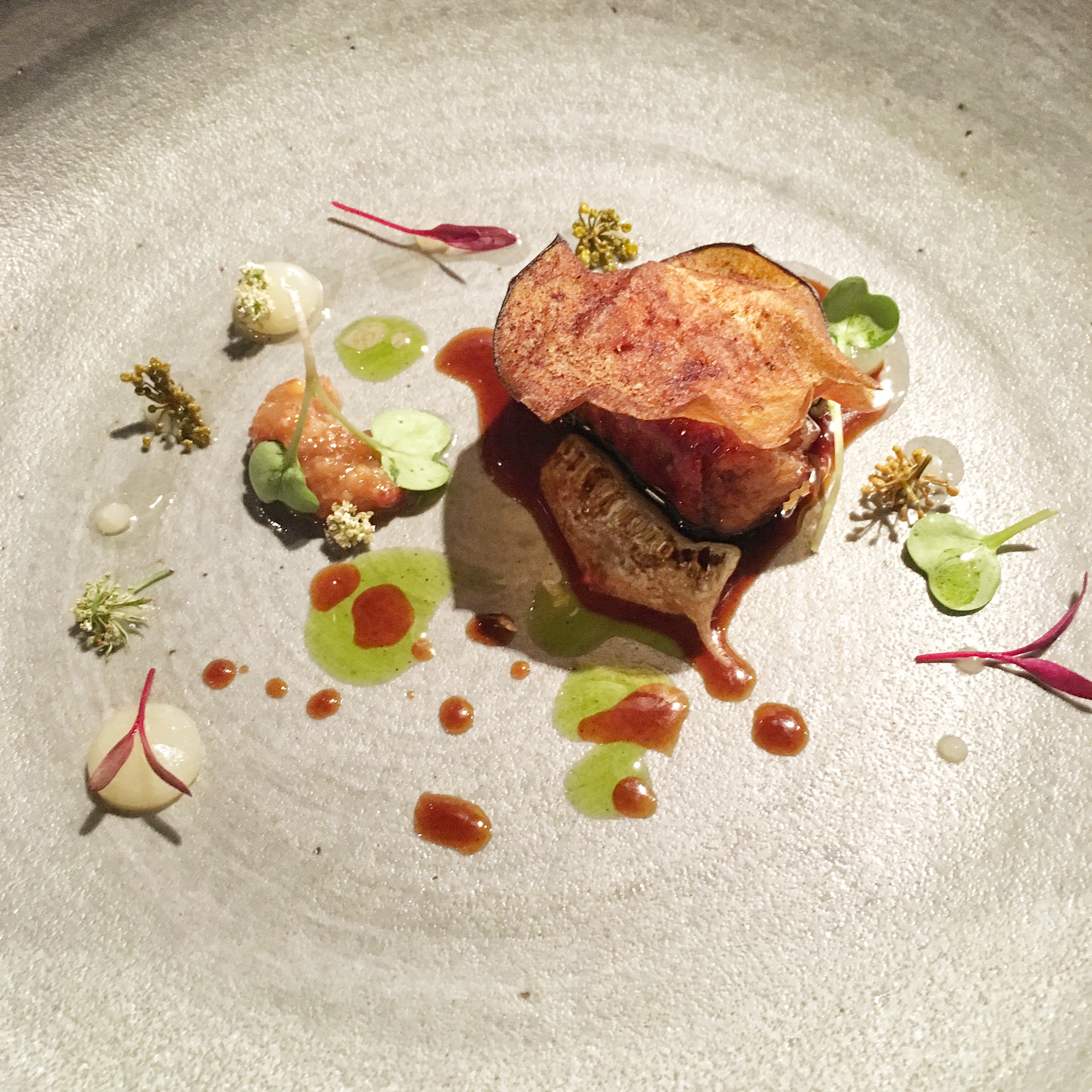 The duck breast was served next, along with a sour cherry jus which the waiter poured from science beakers. I wasn’t entirely sure of the relevance of the science beakers, but the dish was really good nonetheless. 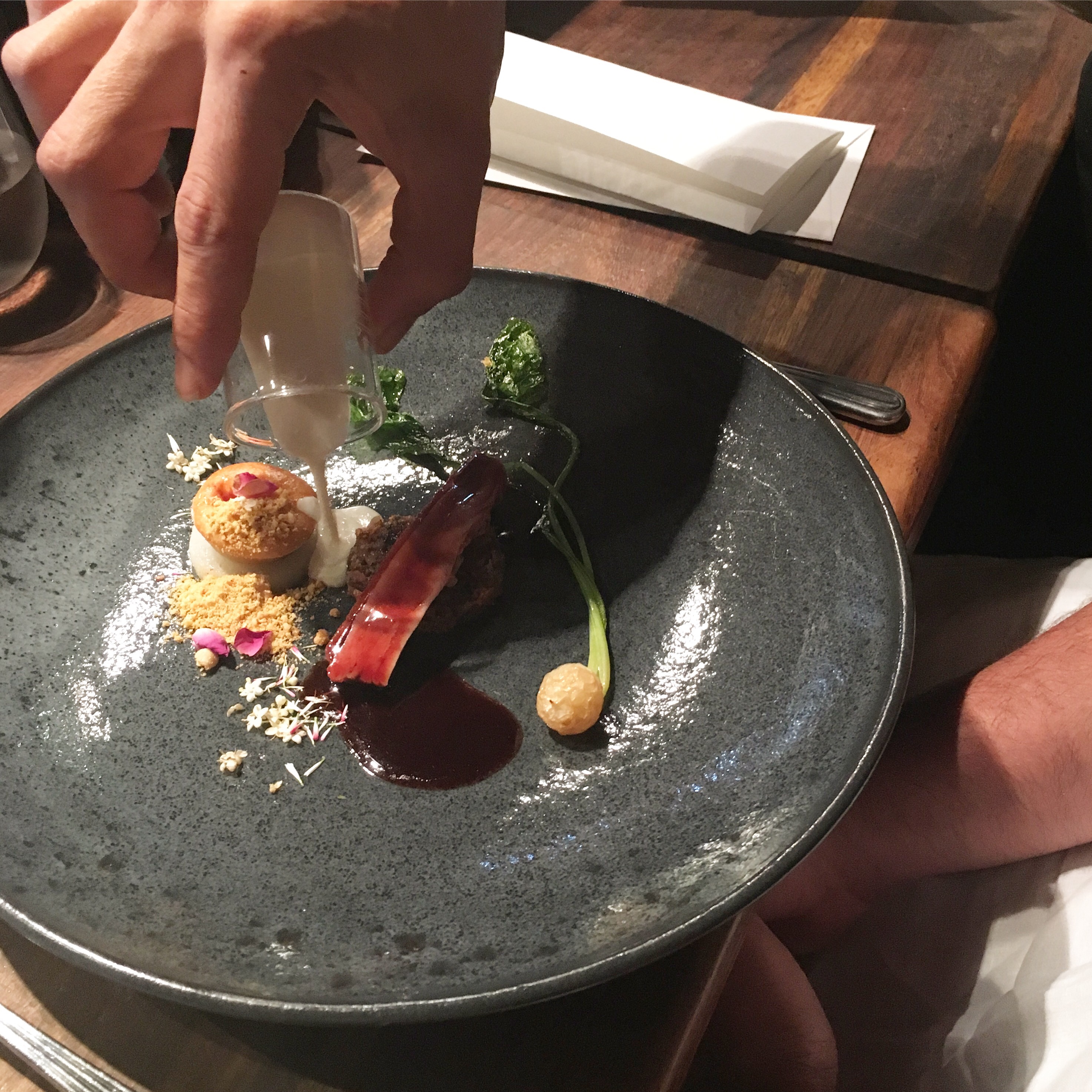 Last of the savoury dishes was a deconstructed lamb minestrone. Beautifully presented and cooked. I particularly enjoyed the potato Parmesan dumpling, two of my favourite things combined – cheese and potato! 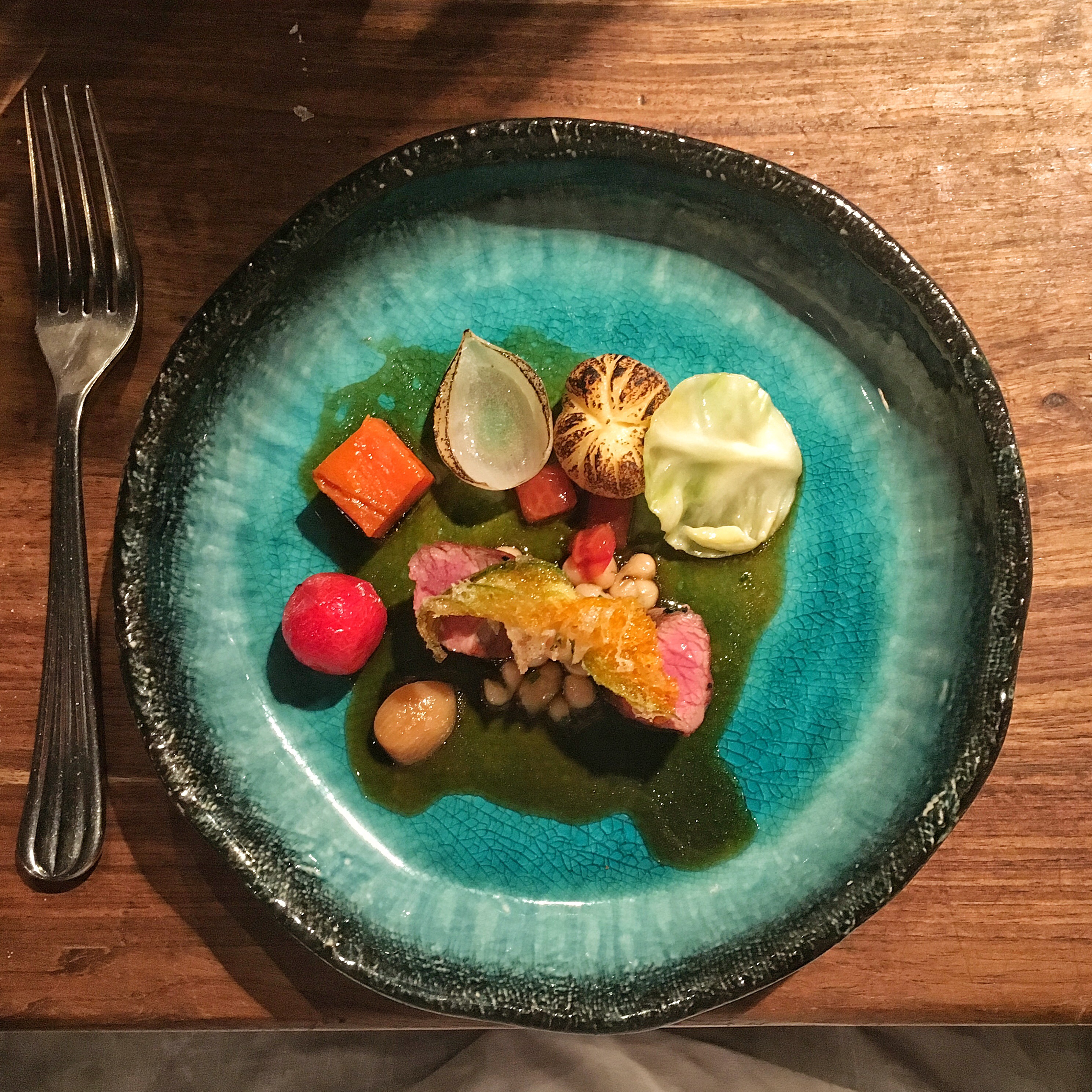 The one dish we were both disappointed with was the milk, bread and honey palate cleanser. We couldn’t put our finger on which ingredient it was but something left a bit of an aftertaste. I personally prefer something a bit fresher and more traditional at this point in the meal. 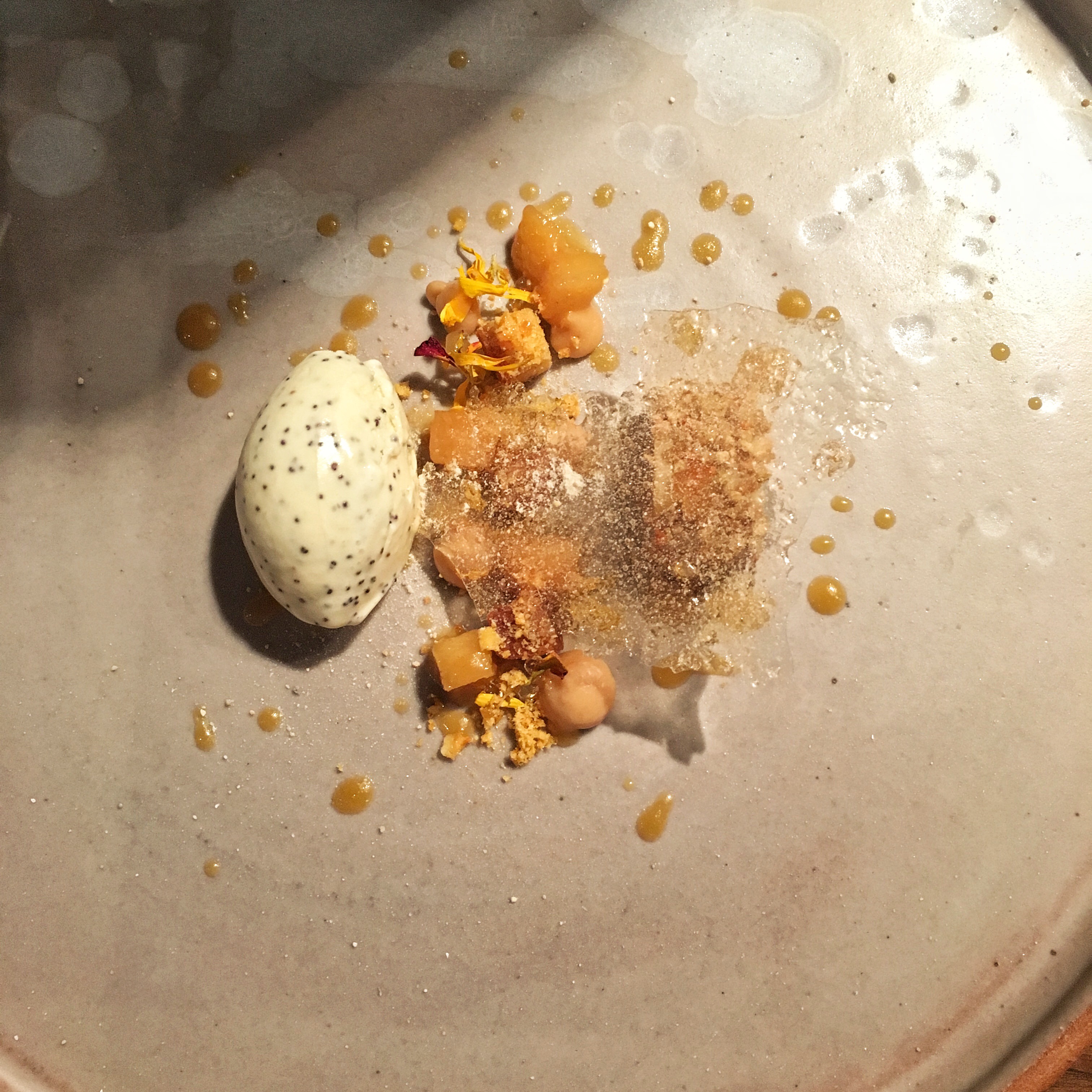 After the disappointing palette cleanser, they redeemed themselves with dessert, strawberry rose ice cream, coconut meringue, sherbet and rhubarb butter. The rhubarb flavour really came through in this dish which was great as I’m a massive rhubarb fan. I normally prefer a richer more chocolaty dessert but this had enough flavours and felt indulgent enough to finish off with. 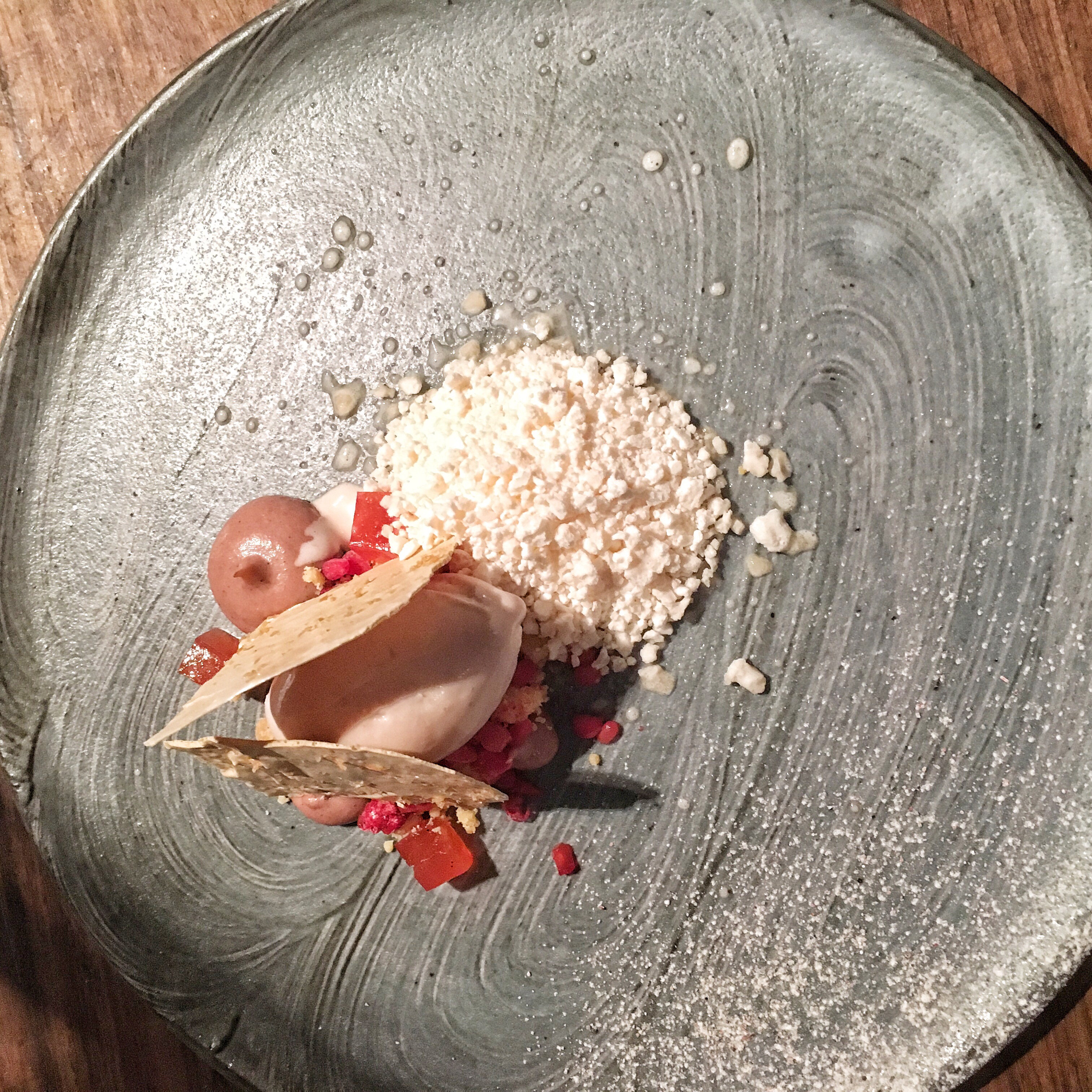 The meal ended just as it had started, with a millionaires shortbread, although this time of the more traditional variety. I’ve seen this in a couple of places, the start and the end looking the same but being sweet and savoury and it’s a neat little trick that I love! 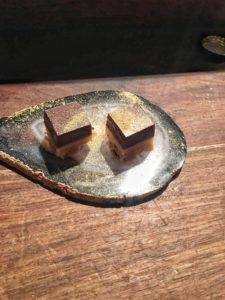 The total cost for the meal, including the cheaper of the two wine pairings was 2250 rand which is around £130. The menu on its own would be around £95 and that does actually include two cocktails in the dark room and a glass of fizz on entry to the Lightroom. This is n expensive place to eat but compared to similar places in Europe and the US is fantastic value for money. We’ve paid double the total bill on food alone in a few places. We were there for a total of 4 hours which when you look it as an experience as well, really adds to the value. Michelin don’t visit Africa, but if they did, I really believe this would be awarded a couple of stars. It’s one of the best restaurants we’ve been to in a while. If you are visiting Cape Town be sure to include this in your itinerary. I’ve heard some people mention Pot Luck club as an alternative. We popped in for a pre dinner drink and while I have no doubt the food is great, you’d be missing out on the amazing experience that is the Test Kitchen! 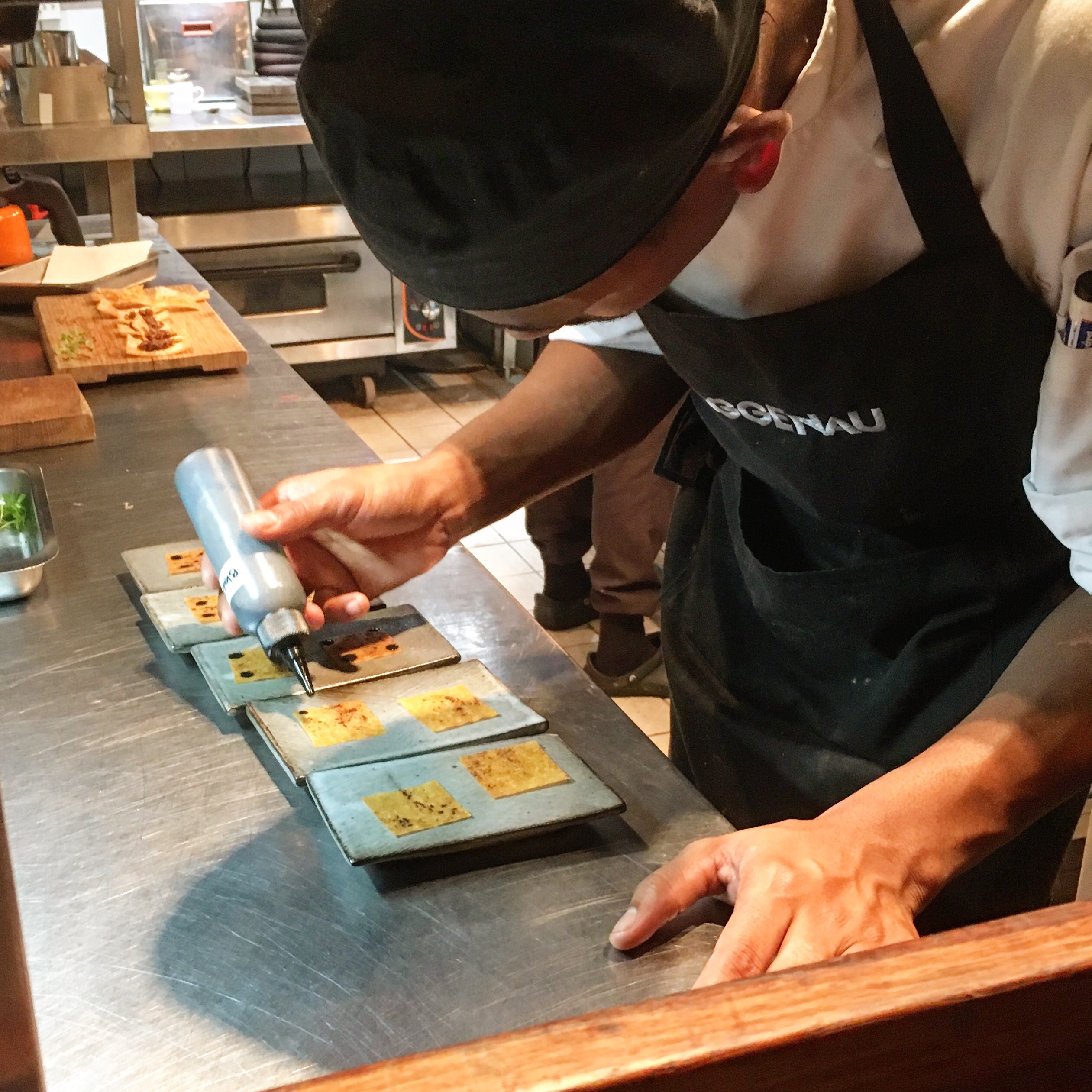 One response to “The Test Kitchen”