Having booked onto a safari during our trip to South Africa, I knew that I was going to want to come away with some pictures that I’d be able to treasure forever, either in an album, or to print out and hang on a wall in our future house. We’ve had our nikon d3100 DSLR for a few years now and I’m generally using my very versatile tamron 18-200 lens. I started to do a bit of Google research and the general consensus out there was that 300 / 400mm + is more suited for safari. If you want to shoot for national geographic, chances are you are going to need to splash out £5k + for a fast superzoom lens. You’ll also be adding a couple of extra kilos to your luggage. It is possible to rent these lenses, but as I would have been looking at hiring for the duration of our trip (2 weeks) it was still going to work out as an expensive option. After a bit more digging, and probably adding the work “budget” into my google search, I came across the Tamron 70-300mm which got good reviews and at £300 was much more within my price range. I enjoy animal photography anyway, and also come from a family of nikon users, so I knew that it would get some use beyond the safari trip. I was very excited when it arrived and I immediately whipped it out the box and put it on my camera. Compared to my 18-200mm lens, it was obviously quite a bit larger at 14cm long. I found that it was not prohibitively long though and it was still easy enough to shoot handheld and to tuck into my bag when not in use. The weight is 767g so not an insignificant contribution to your hand luggage allowance if you’re limited there but still light enough. There’s a lens hood included in the box. I actually left this at home, as although I know the theory of why I should use them, I just haven’t got into the habit. With this lens, it would add even more length, and when flipped back on the lens for storage, the zoom is not usable. Hence I thought it might end up being more hassle than necessary. 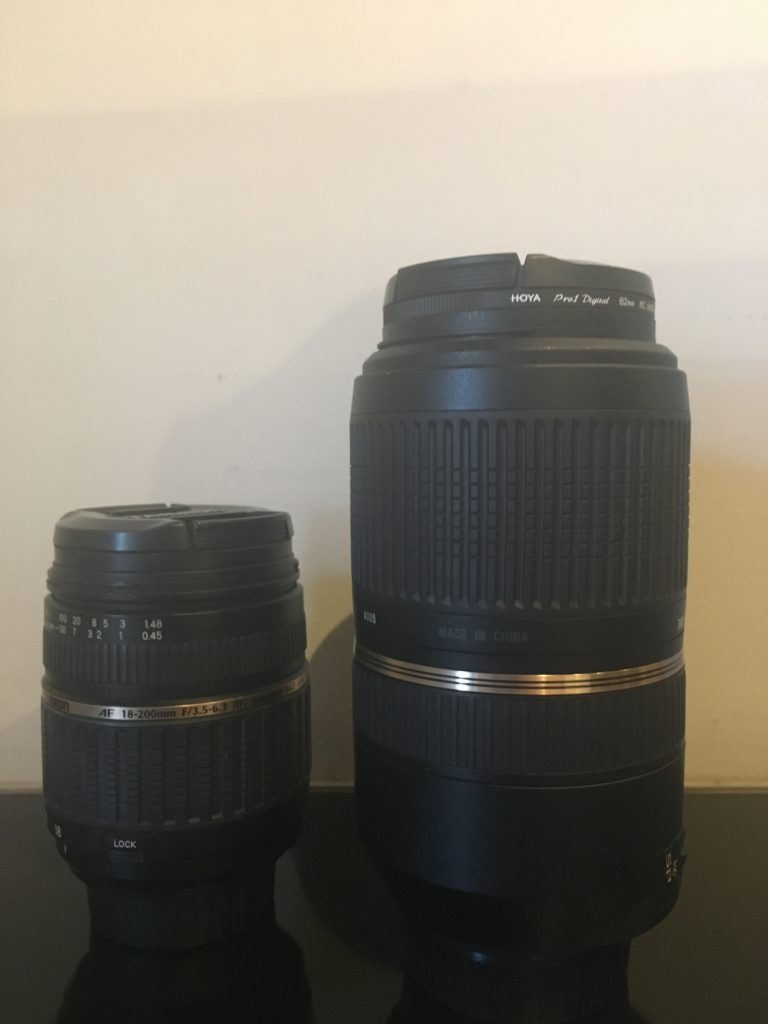 Once on safari, this was the only lens I used on my camera. With the all the dust in the air, you definitely don’t want to be changing lenses along the way, it’s a case of pick one and stick to it! Some of the earlier blog posts I had read by the pros mentioned taking two camera bodies with different lenses attached. Owning just the one SLR, I opted to use my iphone for wider angle shots. You could also take a point and shoot, but one thing I heard mentioned by our ranger was that the zoom mechanism on these can be particularly susceptible to damage by the dust.

Now for my thoughts on the shots I captured during our trip. The next few pictures included in this post are of straight out of camera (SOOC), only cropped on occasion. I’ve included some edited pictures at the end so you can see the type of shot I hope to include in my photo book of the trip or even print out as a canvas.

On our first drive, we came across a large group of dwarf mongooses (mongeese?!) playing in the road. These guys are small but full of character. They are Africa’s smallest carnivore, and the adults measure between 18 and 28cm. Unsurprisingly they can be pretty skittish and so we couldn’t really get that close. We were mostly watching their behaviour through the camera lens and the binoculars. We both took a few snaps of them at full zoom and although we have a few blurry pictures, we also have a few where you can clearly see them keeping an eye on us in our big safari truck. I’d estimate that they were around 12ft in front of our vehicle. With a few tweaks, I think I have a few great pictures of them to add to the album. 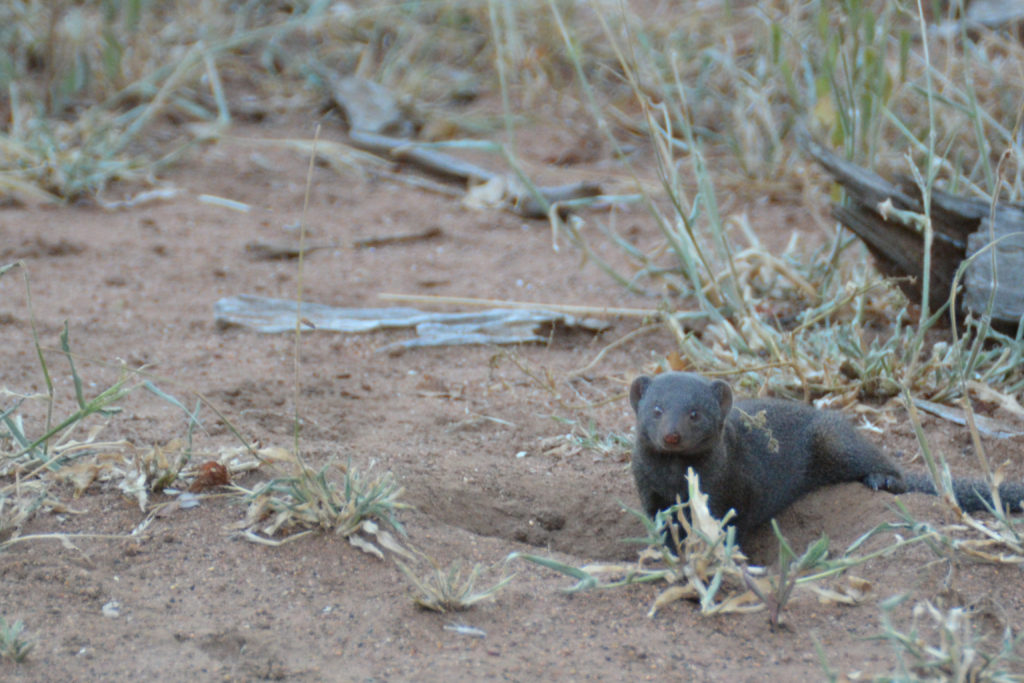 At the end of our first drive, while we were having our sun-downers, our ranger told us that she’d heard about a special sighting on the radio. It was getting dark, so I wasn’t sure how well we were really going to be able to see whatever it was. It turns out however, that for the animals with night vision, the guides and trackers can shine lights on them with no impact (unless they are hunting and it would highlight them to the prey). We drove right up to a fully grown male lion sat in the middle of the road, along with two juvenile males. It was pitch black, but there were quite a few lights shining on the group. As the light dropped in the evening, I had the camera in shutter priority mode, and in this scenario, made use of the bean bag camera supports attached to our vehicle. I managed to capture this awesome roaring shot with a shutter speed of 1/13, aperture 4 and an ISO of 800. The focal length here was 75mm, so pretty much at the minimum of the camera’s capability which just goes to show how close we were to this guy. I was really pleased with this shot. I had the ISO set to auto to allow for maximum shutter speed, but actually in this scenario, I probably would have gone for 800 anyway. There is a fair amount of noise in this, but with a bit of editing and a slightly different crop, I’m so happy that I managed to capture this so early on in our trip. 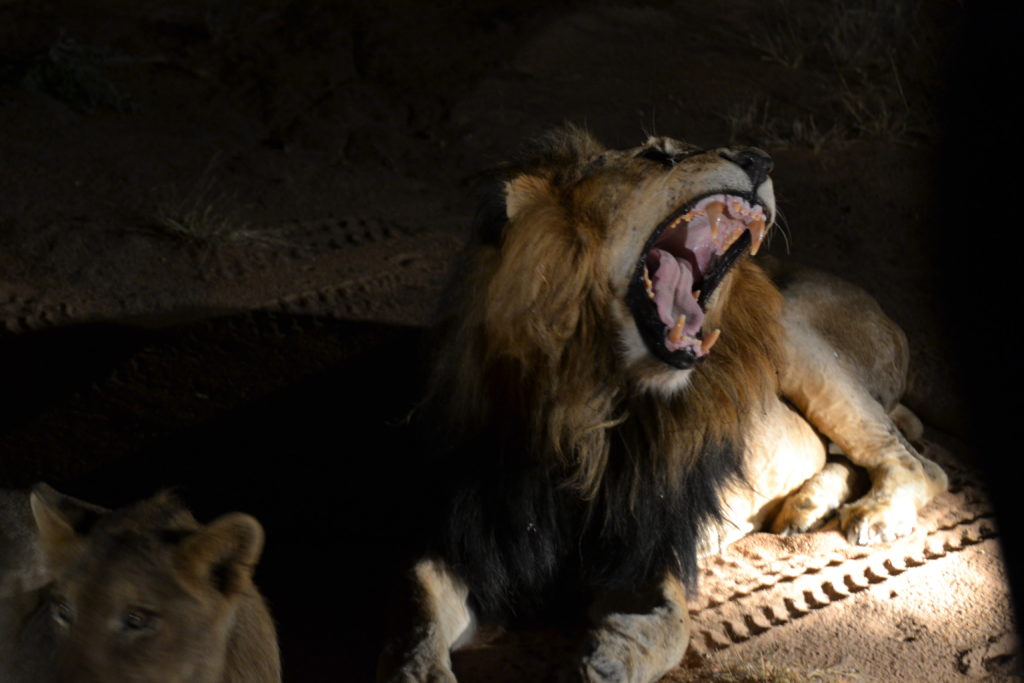 Our second male lion sighting came a couple of days later, in the daylight at the second reserve we visited. He was having a rest by a waterhole, tucked in amongst the vegetation. Due to his postition we couldn’t get too close so I zoomed right on with the aperture wide open to achieve a blurred effect for the background and foreground. In this picture, you can see that in the bottom righthand corner, there is what looks like a smudge. If I didn’t have the pictures taken either side of this and knew better, I would assume that the lens was dirty, but actually there is no such blur in the pictures either side. I think therefore that this is perhaps something contributed by the lens at it’s maximum focal length. I see it slightly in other pictures, but this is the most extreme picture. This photo was taken with an aperture of 5.6, focal length 300mm, shutter speed 1/250s and ISO 400. I really like that the eyes are so in focus in this shot and again this is one that I’m pleased with despite the imperfections. 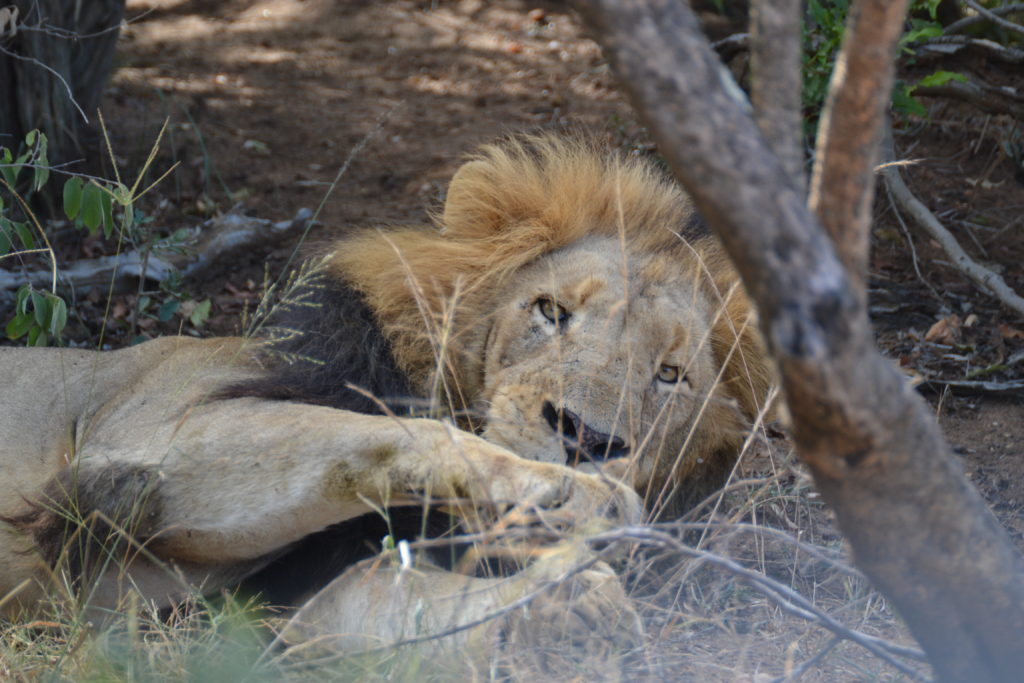 This lens features an “ultrasonic silent drive”, which I have to say I was at a complete loss as to what it meant. My understanding is that it’s related to the AF motor built into the lens. With a nikon D3100, this is a prerequisite for autofocus to work since there is no motor on the body, however it’s worth noting that while I generally had no problems focusing, it wasn’t particularly quick nor silent. It’s worth mentioning at this point that this camera has no macro capability and so you need to be a fair distance from the subject for the lens to focus, even when using manual focus. I was however still able to capture some butterfly close ups just by standing above the long grasses where they were hovering and zooming in to max focal length. 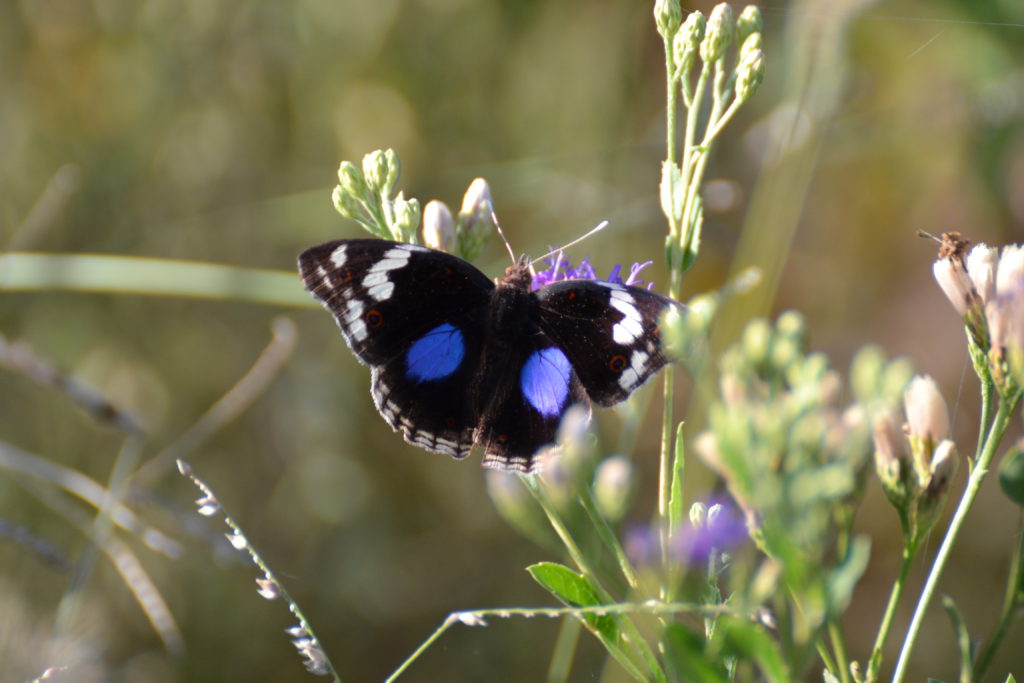 I was really pleased with this purchase for safari. I’ve not had the chance since being back to go through all the pictures I took while on safari, but I’ve included a few of my favourite quick edits below to showcase a few more pictures that I’ve come home with from our trip. I’m also excited to take this lens out again, even if it’s just to photograph ducks on our local canal as spring arrives. I think it really opens up a few more wildlife photography options. I guess there could be other scenarios in which I’ll have fun with this lens – moon photos maybe? Sport? All this remains to be seen as I continue to get out there and try things out. In case in the (very distant) future I upgrade to a full frame Nikon, I would be able to continue using this lens. I purchased the lens from Amazon. I read a number of reviews elsewhere, but you’ll see that amazon also has a chart of other similar lenses which would also be worth investigating before splashing the cash. 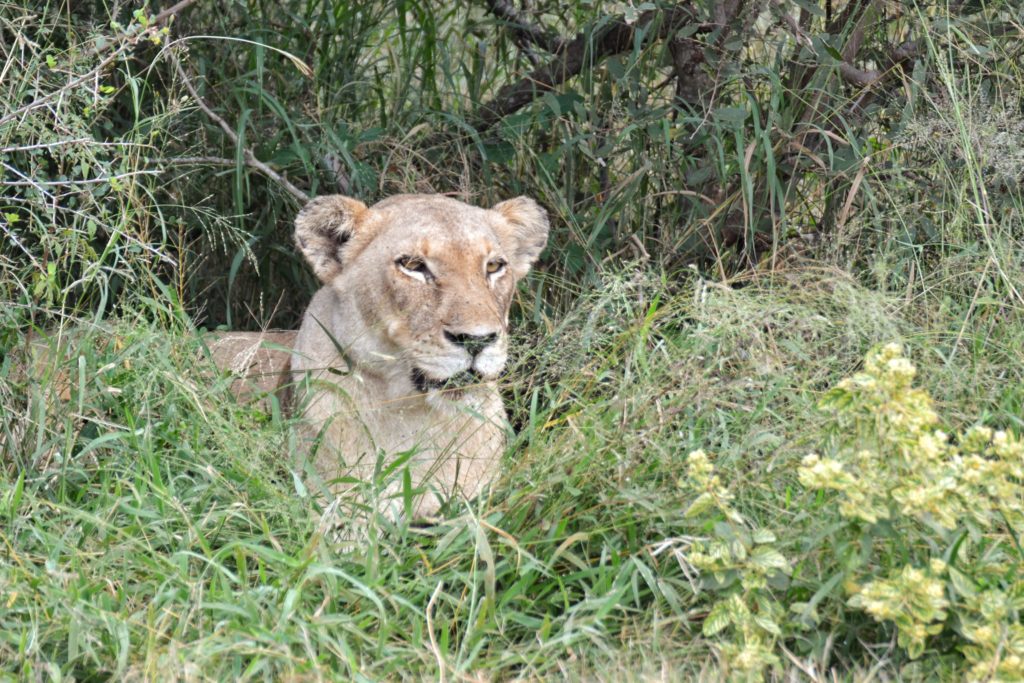 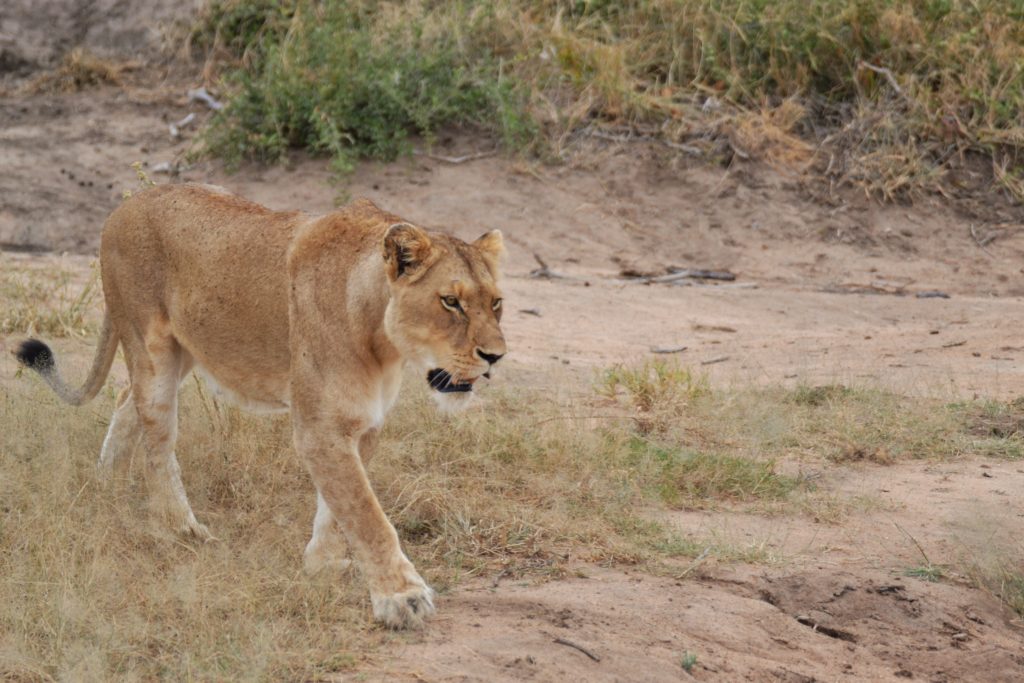 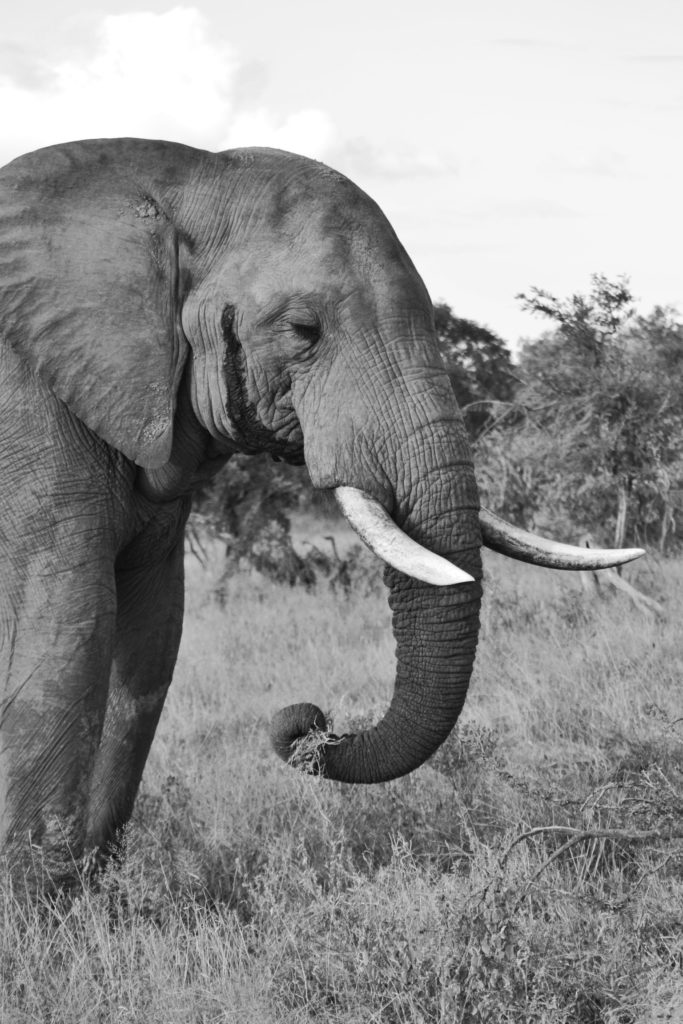