When you want to eat some of the best food in the world, especially to build a trip around eating, you would often think just to head to the big cities, Tokyo, Paris, New York and London all have far too many Michelin stars to chose from and plenty of restaurants in the Top 50 list. In the UK however, within an hour of leaving London, in the picturesque Thames Valley, as well as beautiful views, you will find a pocket of Michelin starred restaurants that are definitely worth building a trip around.

Perhaps the best known of these is Heston Blumenthal’s Fat Duck, situated in the small town of Bray in Berkshire, population 4000. Previously awarded 3 Michelin stars, it does not currently feature in the guide at all as it relocated to Sydney for a few months last year. It is fully expected to regain those stars when the next UK guide comes out this year. We were lucky enough to secure a reservation in its first month of reopening. We had high expectations of the meal, hoping it would be the first restaurant to match up to our all time favourite, Alinea in Chicago. It definitely rates highly on excitement throughout the meal, and I would definitely recommend that any one who is willing to spend the money should go, but we were slightly disappointed with some of the flavours. Another disappointment was that they had asked us quite a few questions about our childhood memories and memories that we shared with the group we went with, but then they did nothing with this during the meal. I’ve heard other people had a different experience on that front though, but when they have spent time to find these things out, it’s disappointing when it comes to nothing.  It was still one of the most memorable and enjoyable meals, and we’d definitely consider going again in a few years time if they changed the menu and the theme. I won’t say too much about what happens when you’re there, as so much of the meal is about the surprise element of what is happening but here are a few of pictures to whet your appetite! 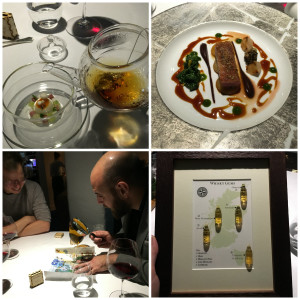 In complete contrast to the Fat Duck, Bray’s other 3 star offering, The Waterside Inn, is much more of a Classic French style restaurant. It has a beautiful waterside location on the Thames and if you are lucky with the weather, you can start your meal outside on the terrace with an aperitif. The Waterside Inn was founded by the Roux brothers and is currently managed by Alain Roux. It is the only restaurant outside of France to have retained it’s 3 stars for more than 25 years. We booked to stay overnight here so we didn’t have to make the journey home after our dinner. As they only have a few rooms, it felt a very homely place to stay. There was a little kitchen along the hall where we could help ourselves to a tea or coffee, or a gin and tonic from the honesty bar. The dinner as you would expect was exceptional. We decided to have ‘Le Menu Exceptionnel’. All the classic French dishes were there, and all tasted unbelievable. I think the most memorable would have to be monkfish on simmered coco beans with tomato and chorizo flavoured sauce. It was delicious.The Waterside Inn don’t allow photos to be taken in the dining room, so unfortunately I have no pictures to show you, but here’s a photo of the pastries we had delivered to the room in the morning – yum! 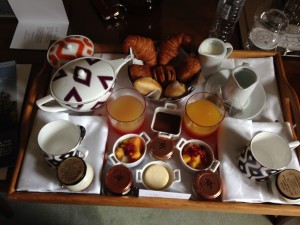 If you are keen to head to Bray but don’t want to splurge on one of it’s 3 star options, the Hinds Head is a gastropub owned by Heston Blumenthal that earned a star of it’s own in 2013.  As well as fantastic pub food, there is also a great G & T list. You can also just sit in the bar here to have a gin and one of their tasty scotch eggs. 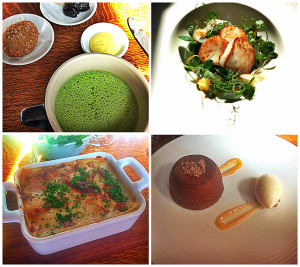 The Royal Oak, Paley Street is another Michelin starred gastro pub, this time a little bit in the middle of nowhere so if you want to enjoy a few glasses of wine with your food, you’re best getting a taxi there.  We’ve been twice now, for Sunday lunch and on a Saturday evening. Both times the food was great although I have to say we were a bit disappointed by the service on the Saturday evening. The first time we went was Halloween and we had novelty petit fours to mark the date which I thought was a really fun touch! One thing that’s great here is that they have a wine of the month which is reasonably priced and when you are pretty clueless about wine like me, it makes the choice nice and easy. 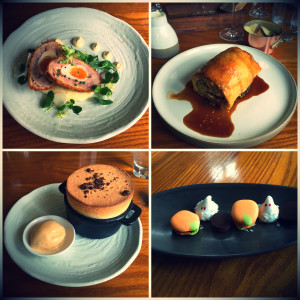 The UK’s (and possibly the world’s?) only two Michelin star pub. The owner Tom Kerridge is now a regular fixture on British cooking shows and has published 3 cookbooks. Until 2016, the restaurant started taking bookings 1 year in advance which meant that to be able to visit on my birthday this year, I was online on my previous year frantically trying to secure a table! We were pretty intrigued as to how a pub was going to compare to some of the two star meals we’ve eaten. I have to say my starter of pork and mushroom terrine was not that interesting, but when the main came, any concerns were immediately blown away. I had gone for the pigeon, and presentation aside, there were so many different elements, each of course delicious and that was where you could really tell that it was a step above any of the other pubs on this list. For desert, I had a great chocolate and ale cake which came with a very cute undersized ale to go with it.  As we sat at the first lunch sitting, we had to leave our table to have our coffees, but they have a very nice bar area next to the restaurant where you can stay if you’re not quite ready to leave. Thankfully this year, they changed the booking process to 12 weeks in advance which is a much more sensible process, although it could well make it even harder to get a table. Kerridge has also opened another pub in Marlow  called the Coach. We enjoyed a drink there before going to the Hand and Flowers and would definitely like to head back again to sample the food. 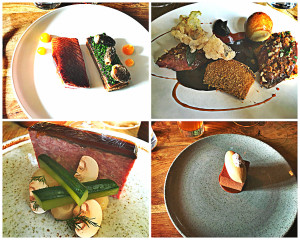 How to get there….

Of course when visiting these restaurants, it’s always nice to be able to enjoy a few glasses of wine with your meal, that’s why we’ve always travelled by train. The closest station to Bray is Maidenhead which is quickly reached from London Paddington and Reading and Oxford on the other-side. From Maidenhead, there is also a branch line which will take you to Marlow. If you plan to stay around Windsor, your best bet is to catch a train from Paddington to Slough from where there is a shuttle train which runs back and forth to Windsor and Eton Central. Once in the area, we relied heavily on cabs to take us to and from dinner and were also happy to discover on our last trip that uber is available on Windsor!

Both The Waterside Inn and the Hand and Flowers have rooms above the restaurant. There are reasonably priced chains such as Premier Inn in Maidenhead, which is easily reached from Bray. Our favourite option however has to be The Oakley Court hotel, just outside Windsor. It’s a great place to spend a weekend, right by the river with stunning grounds. If you want to work up an appetite before dinner, you can borrow bikes and cycle into Windsor and back along the Thames or after your dinner, you can enjoy a nightcap in the amazing cocktail bar. I’m also told that the restaurant here is also worth a visit so well be paying that a visit on our next trip!