From Las Vegas, we headed back to the coast, to the city of Santa Barbara. Santa Barbara is a small city about 90 miles North of LA and is described as the American Riviera due to its climate and well off population. We stayed at the Simpson House Inn bed and breakfast, a converted house set in a large garden. We arrived at night, just in time for the evening wine time where they put out some local wines, canapés and cheese for guests to enjoy by the fire (and Christmas tree!). 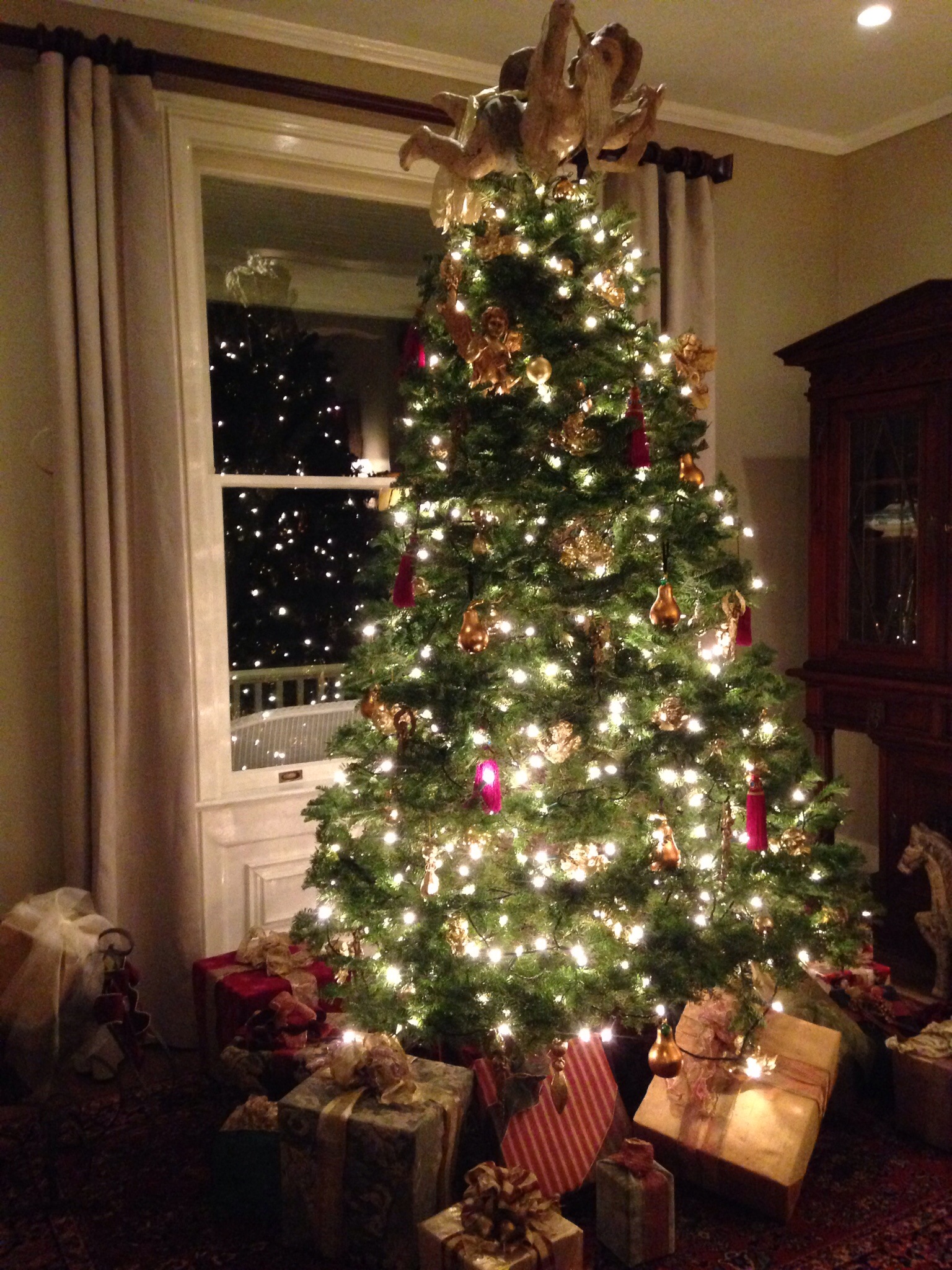 We had a day to explore the city which is quite manageable on foot. The main street is lined with boutique shops, local restaurants as well as the usual chains which have taken on a more subtle facade to fit with the style of the road. While the Spanish influence on California is everywhere you go in place names, here it’s also very evident in the architecture. Most of the buildings are whitewashed with red roofs. We started by heading to the courthouse which was rebuilt in the 1920s following a major earthquake. The building has a tower which you can go up to get a view of the city. We also visited the Santa Barbara history museum which had a good overview of the city’s history, from when it was a part of Mexico right through to the modern day. 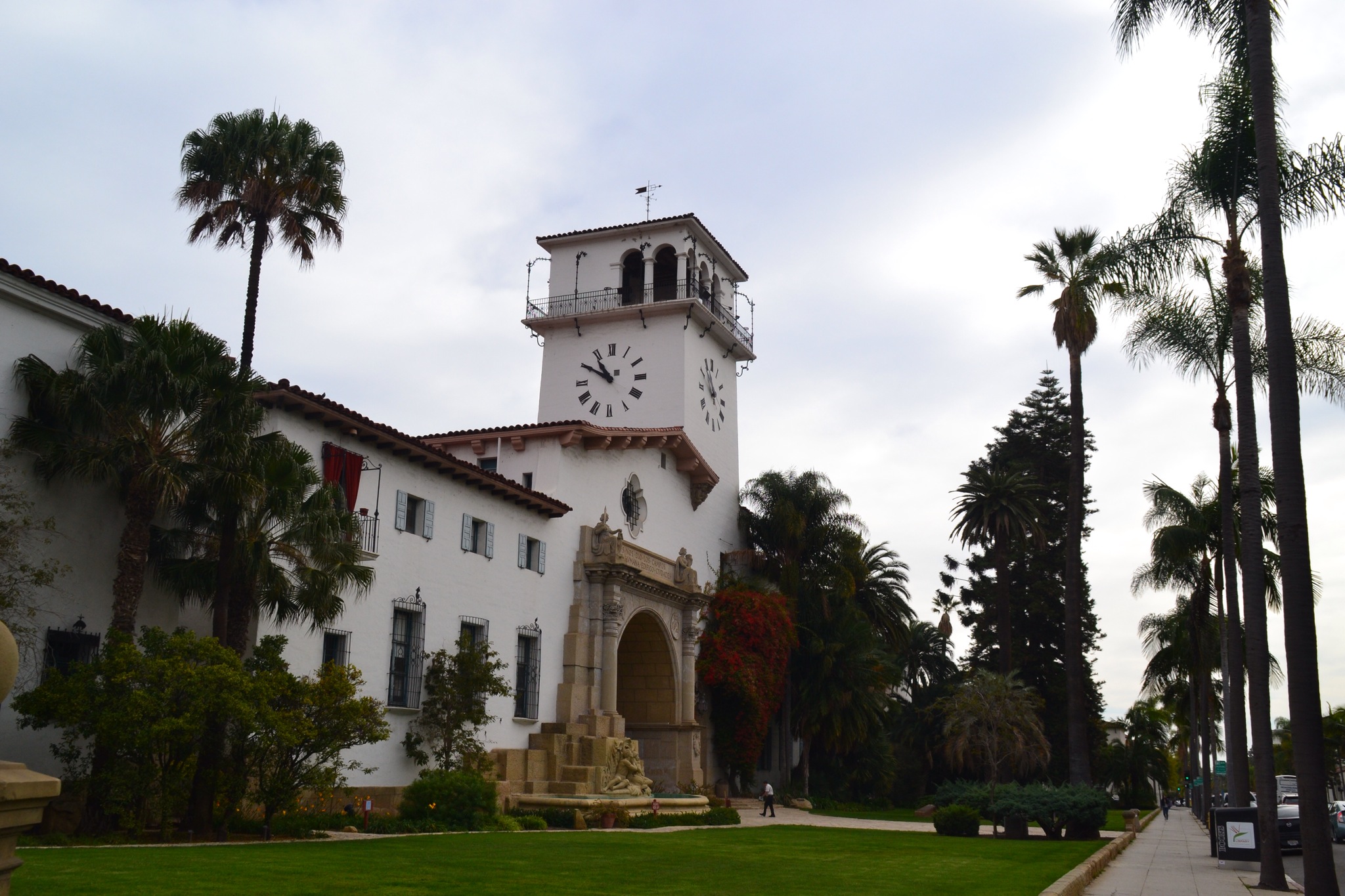 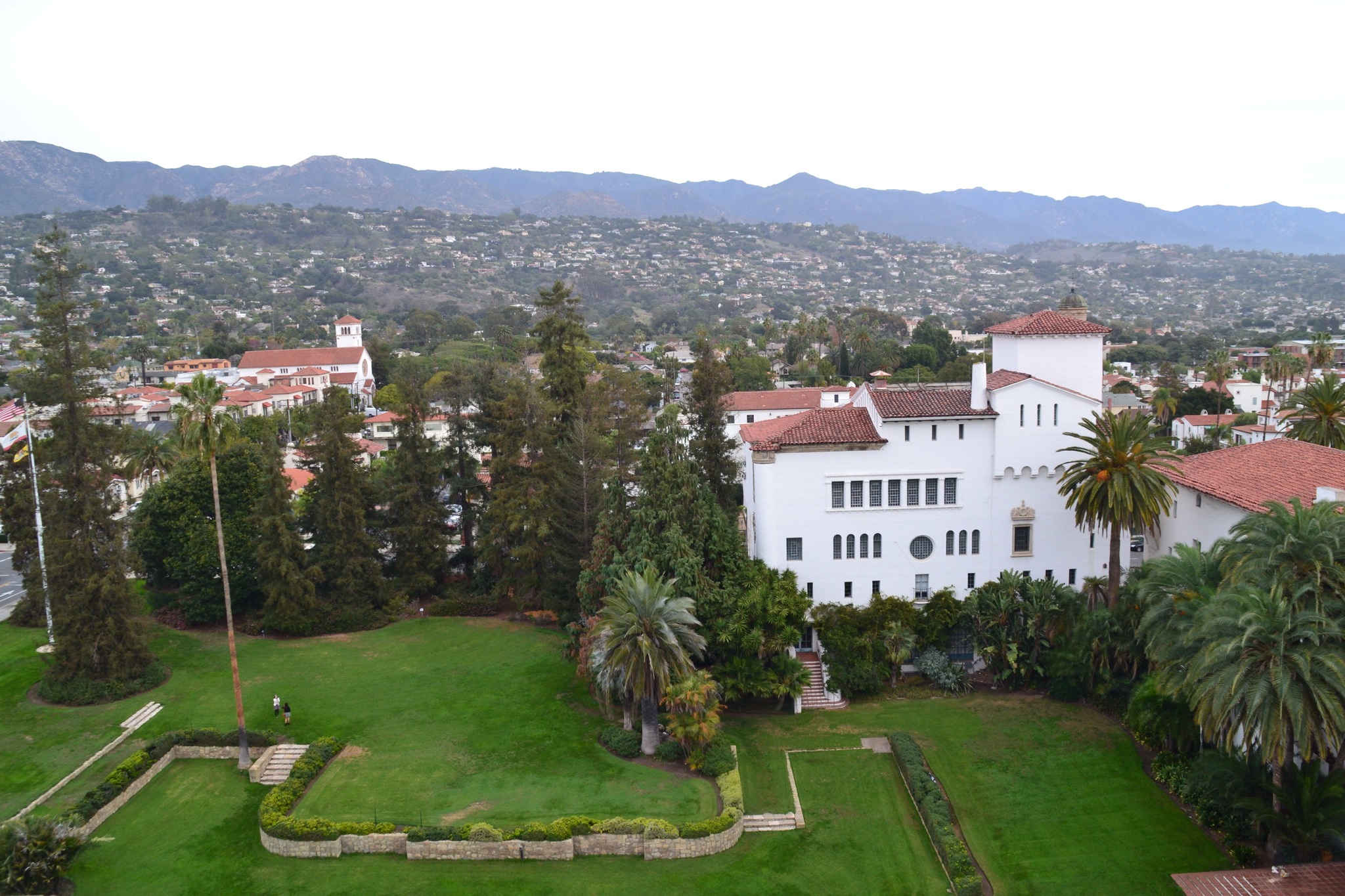 We ended our walk at the pier where we had lunch and looked back at the city and the surrounding hills. In the afternoon, we made the most of the sunny weather and the gardens to enjoy what would probably be our last chance to sit out in the sunshine before returning home. In the evening we had some sushi. US sushi is very different to what we had in Japan. Japanese sushi is really just about the fish but in the US, there are lots of different ingredients and the rolls are coated in copious amounts of various sauces. 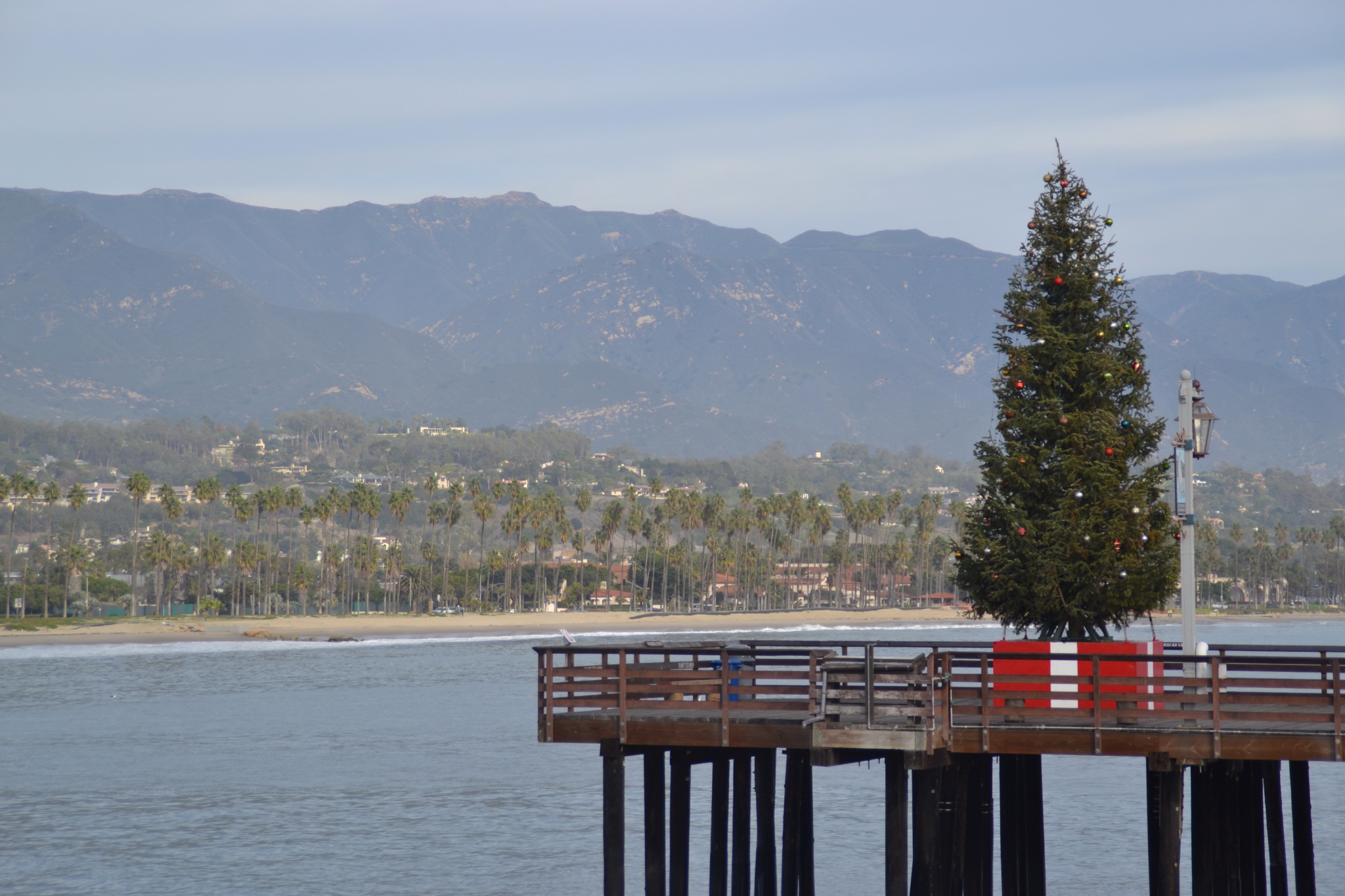 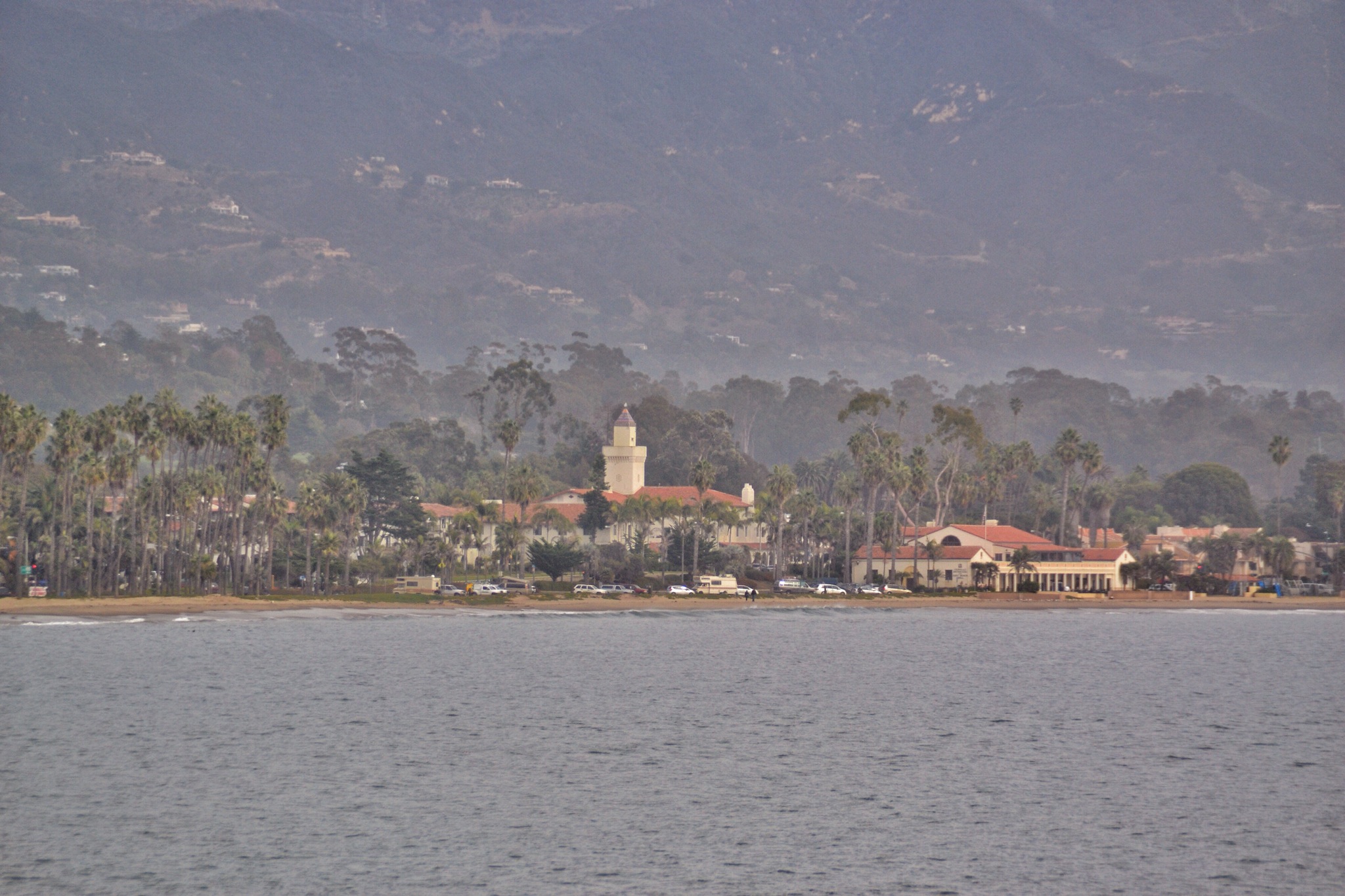 The next day we had a fairly early start as we were to drive the Pacific Coast Highway number 1 towards San Francisco. The weather unfortunately wasn’t as great as the day before as there was a storm on its way down from SF. We stopped at the last town before the coastal part of the drive and heard in the petrol station that there was a chance we would be turned back as some trees had come down. For the first part of the drive, although it was a bit rainy, we still got to enjoy the scenery as we drove round the hairpin bends along the cliffs. We also made a stop to say hello to the resident elephant seals. There were loads of them and some of the males were really huge (and pretty funny looking with their trunks). 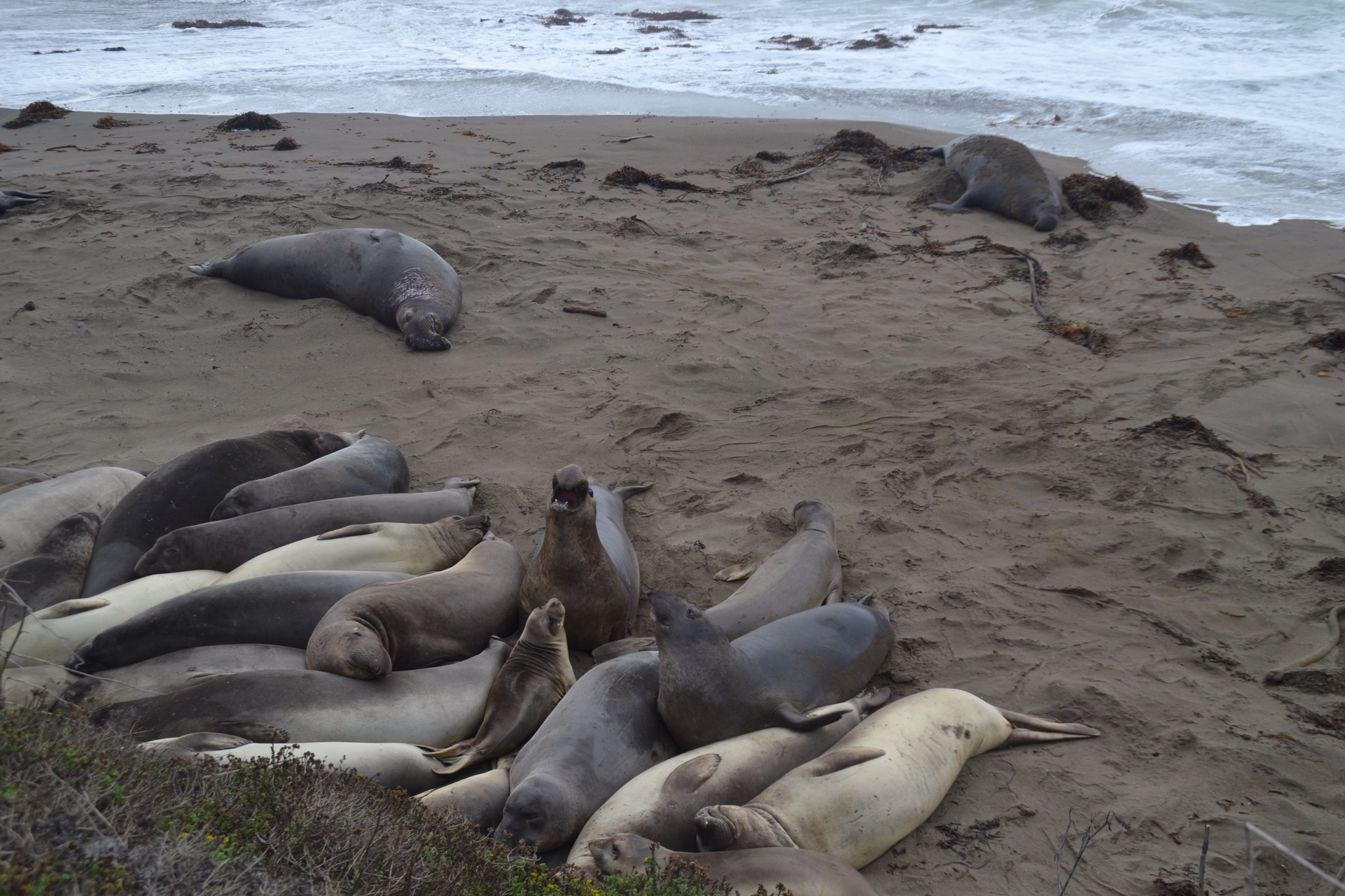 As we continued to the most scenic part of the drive, the Big Sur, the visibility dropped and it was a pretty hairy drive as windy roads in super heavy winds and rain with a massive drop to the sea beside you is less than ideal driving conditions. We didn’t stop to take many pictures or to do the few short walks available, but visibility had improved enough that we could just about see when we crossed one of the famous sights, the Bixby Bridge, which on a good day looks something like the photo below (photo courtesy of Wikipedia). 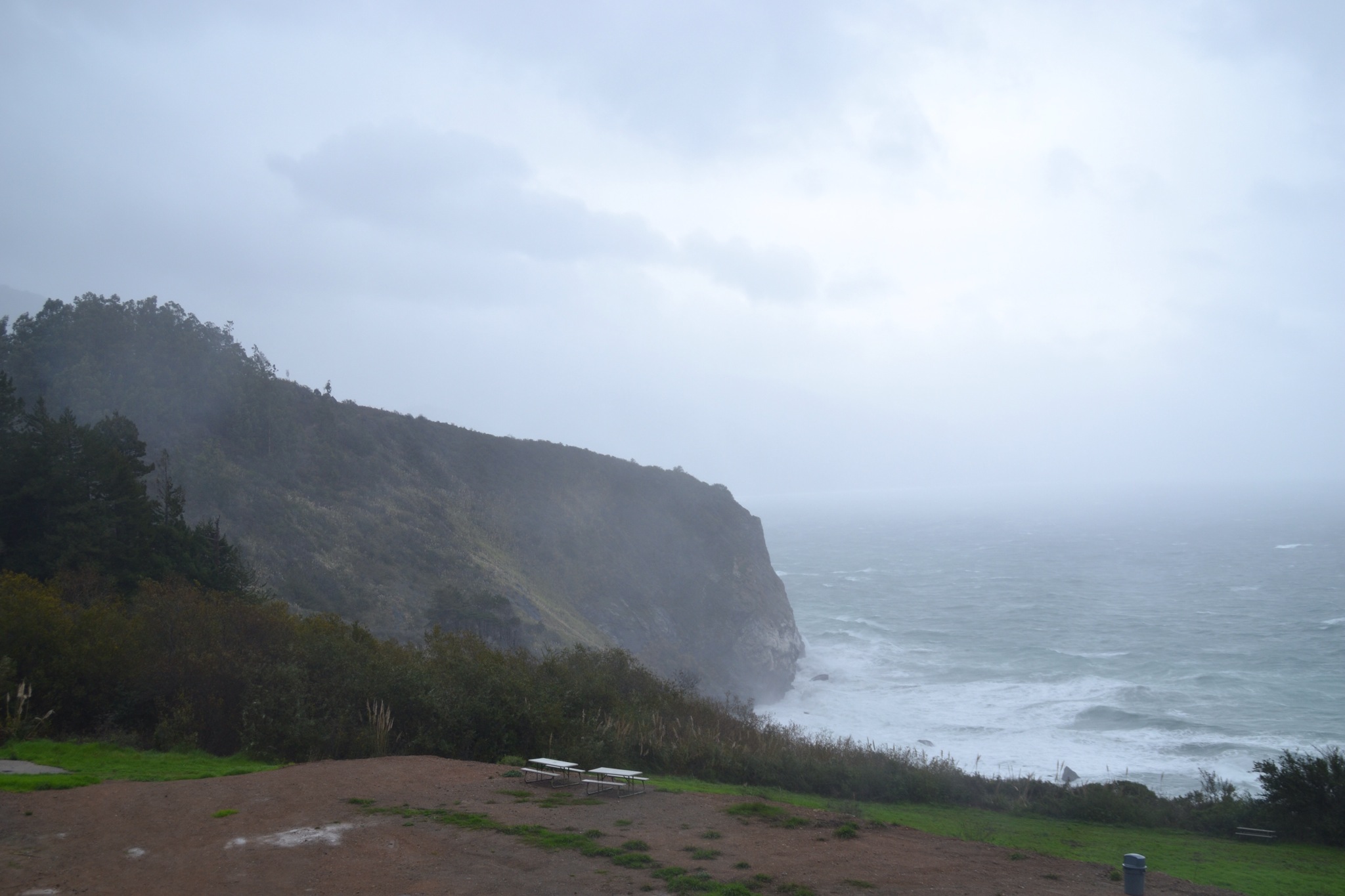 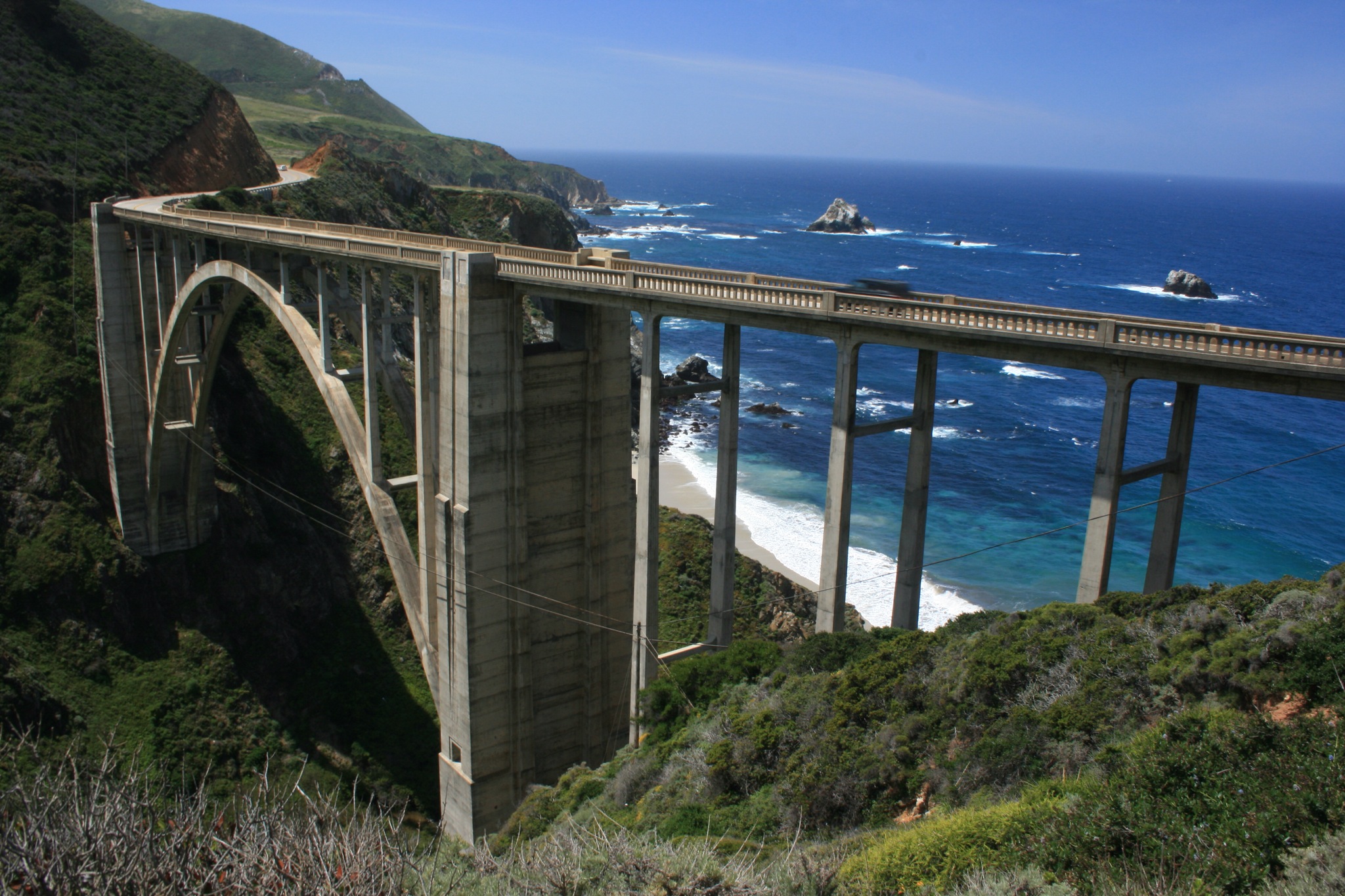 We spent the night in Carmel on the Montery peninsula, a quaint looking town which probably would have been very nice to walk around had there not been rivers running along the pavements. Luckily we were just round the corner from an Irish pub so we didn’t get too wet on the way to dinner.

The following day, the weather was much better as we continued on highway 1 up to San Francisco. There were a few rain showers but we also saw blue skies and could stop and get out of the car. 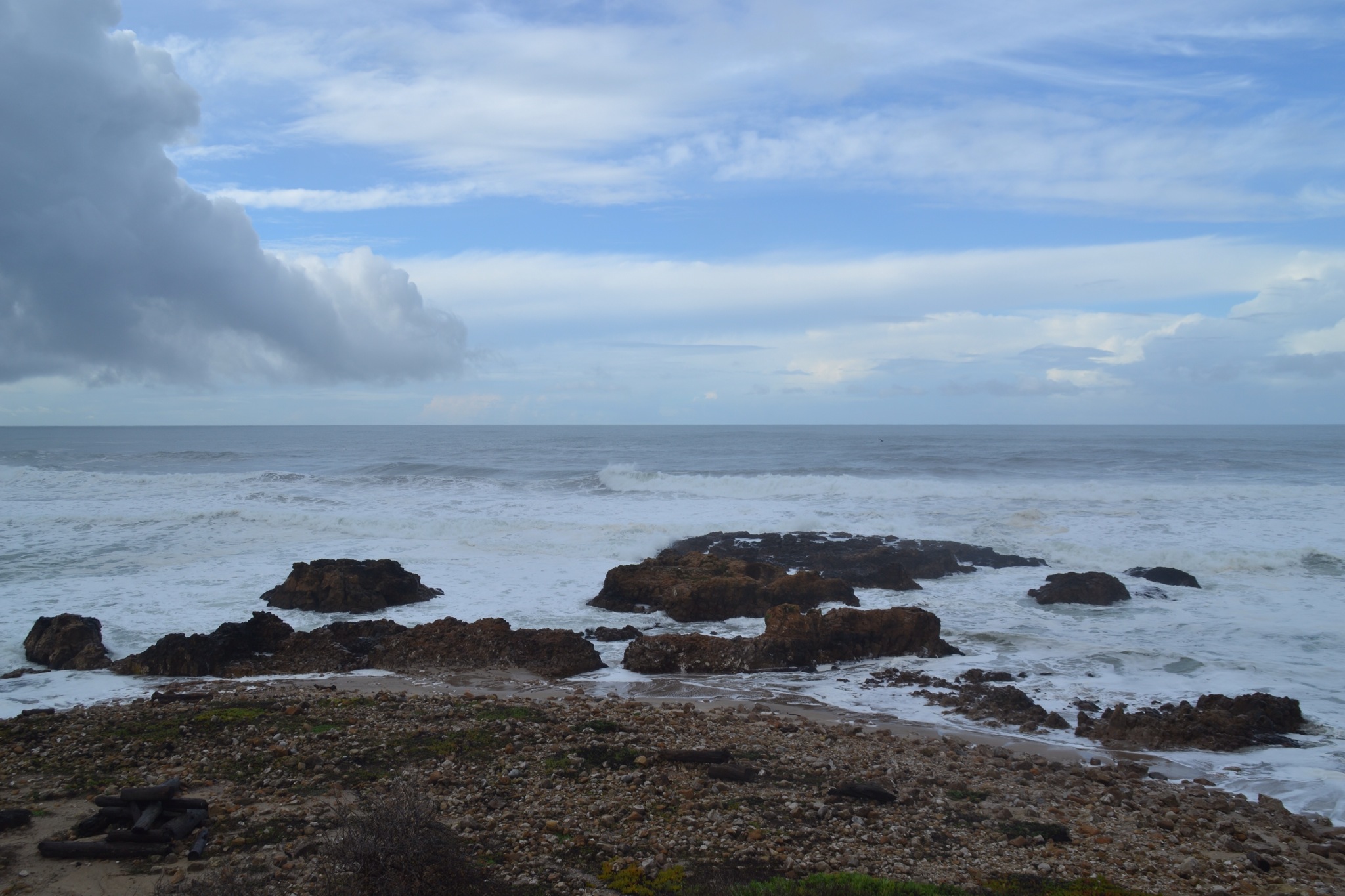 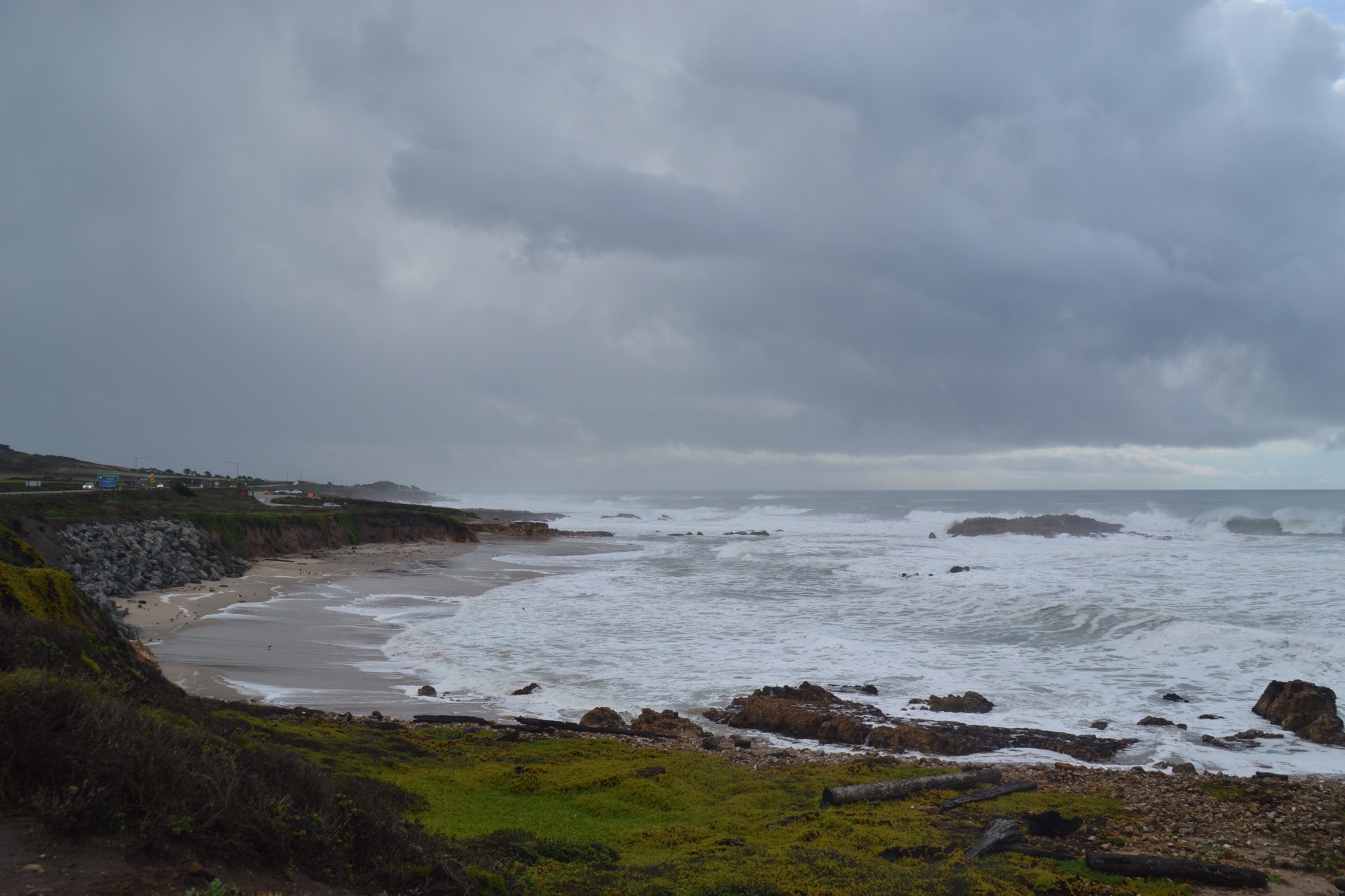 We didn’t have too much distance to cover so made it to San Francisco in time for a late lunch. Even with the terrible weather it wasn’t hard to see why the coastal drive from LA to San Francisco is so famous. The scenery is really dramatic and you are driving right next to the sea for a lot of the drive. If you were to do the drive in summer, you could probably add a couple more days to enjoy a few walks in the national parks along the route or to explore the Montery peninsula a bit more.