Having recharged in LA, it was time to head East. Before leaving LA, we needed lunch so parked up near the freeway entrance and as it was raining ran into the nearest place. We saw plenty we liked the look of on the menu so placed our orders. It turned out we were in a vegan restaurant so my Greek quinoa was actually served with a very convincing fake kebab meat. Dean was less impressed with the fake chicken though!

Unfortunately the rain continued so our drive to our first stop of Boulder City in Nevada was not very scenic and pretty tiring due to the extra concentration required! It was dark when we arrived at the Boulder Dam hotel, but we were greeted with a room upgrade to their 1920’s suite which was a pleasant surprise. Boulder City was built to house workers building the Hoover Dam in the 1930’s. It’s a pretty quaint town, which has maintained the no casino rule introduced to keep the workers on track. The hotel was very welcoming and they were able to recommend a nearby pub for dinner. As it was very rainy, we didn’t get to explore the town much more than that, but there were a few other restaurants and a craft brewery which looked pretty inviting. The hotel contains a museum about the Hoover Dam which we could visit for free and was actually a really good museum to brief us before seeing the real thing. We booked onto a tour at the Dam so we could go inside the power plant and the dam itself. I’m not sure it was really worth it especially as we’d been to the museum in the morning, but being inside it was pretty cool. I really liked the architecture, which was all very Art Deco as you would expect of the time. It was also interesting how the fact it would be a tourist attraction was incorporated into the design all along. 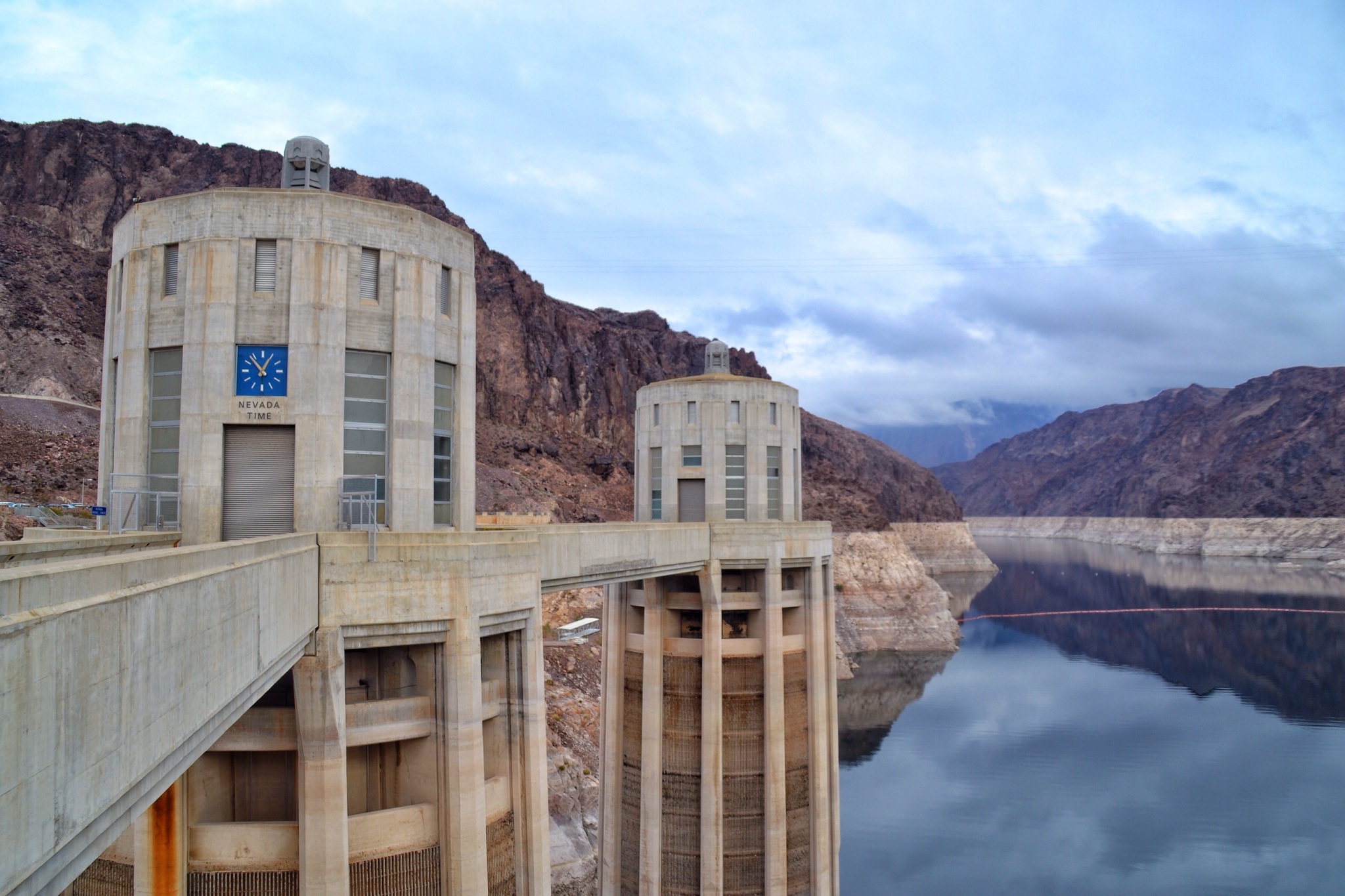 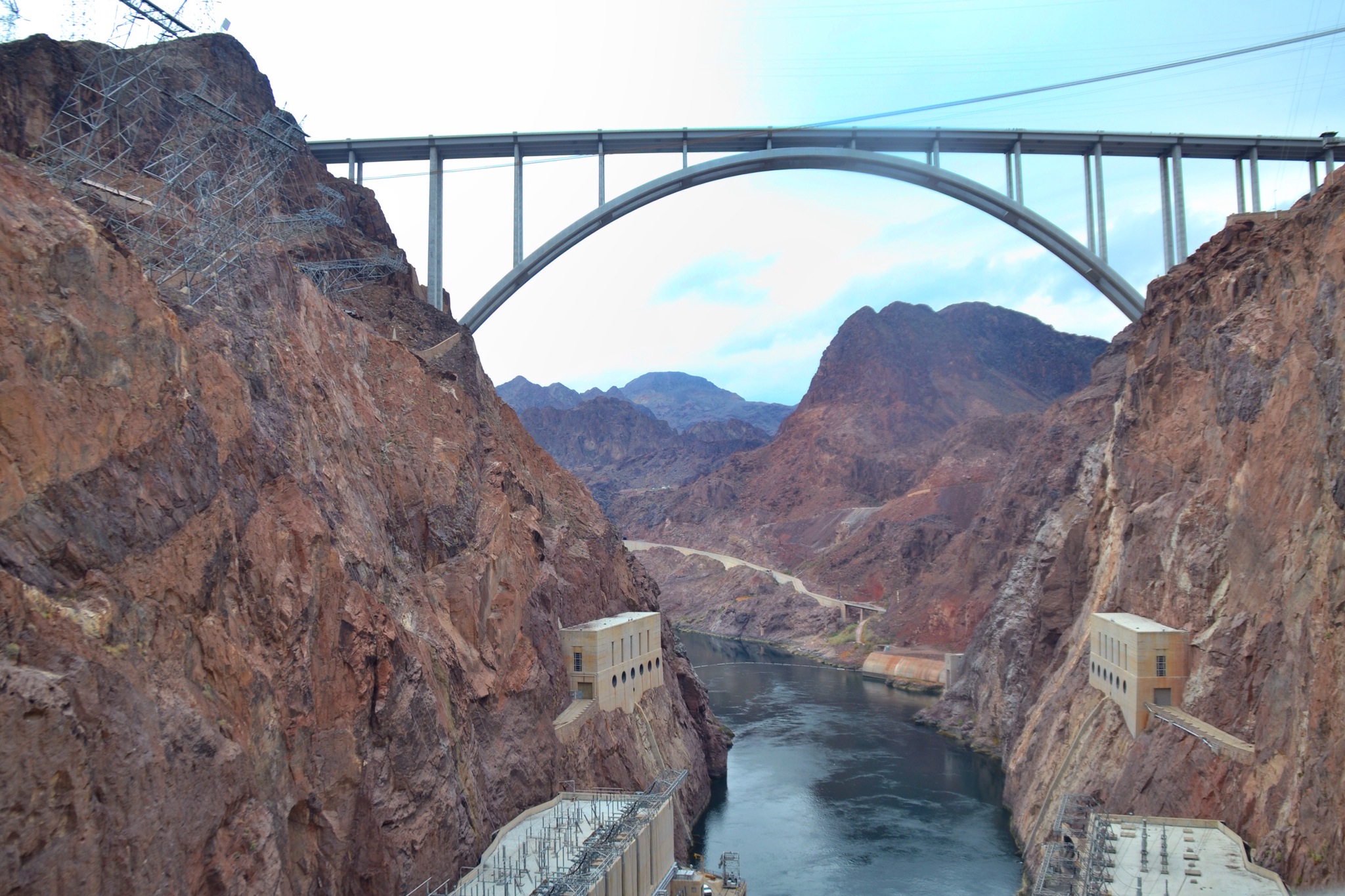 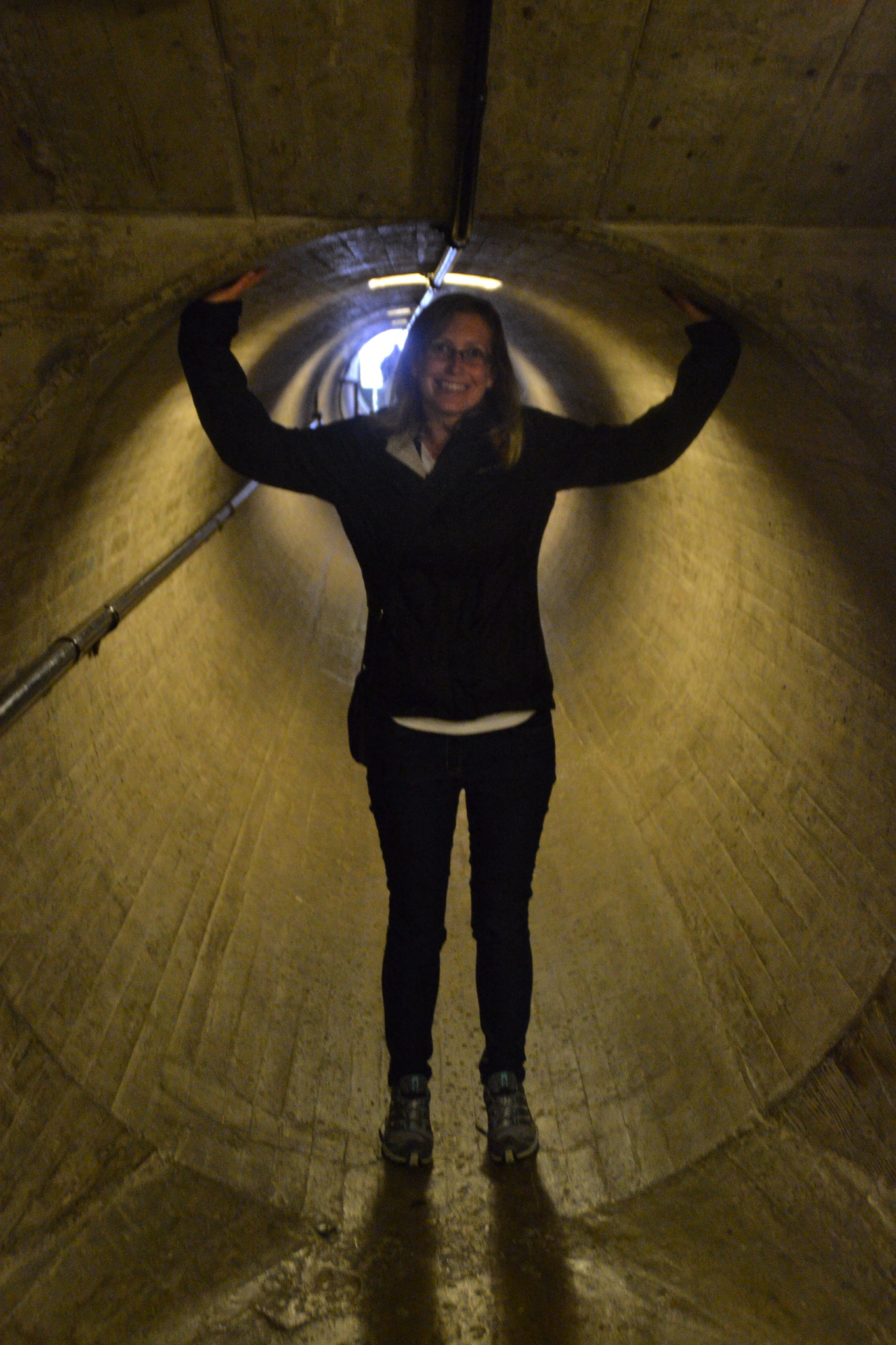 From here, we crossed the state border (and a timezone) to enter Arizona to head for the Grand Canyon. The weather cleared up a bit so we had some good views on the way, but it ended up taking longer than planned when the main road into the park was closed due to an accident. We stayed at Bright Angel Lodge, right on the rim of the canyon. We were a bit worried about the availability of dinner arriving at 8.30pm, but the hotel restaurant was open till 10pm and if we’d been any later, there’s a Pizza Hut and McDonald’s just outside the park entrance! We woke up to clouds but no rain and decided to head out for a run to start the day. We set off along the rim. I was finding it really hard and couldn’t think why until Dean reminded me we were 2100m above sea level! As we’d not really encountered mega hills on the drive I’d just not considered it. We stopped to take some pictures on the way though which allowed us to catch our breath. It was a stunning location for a run. 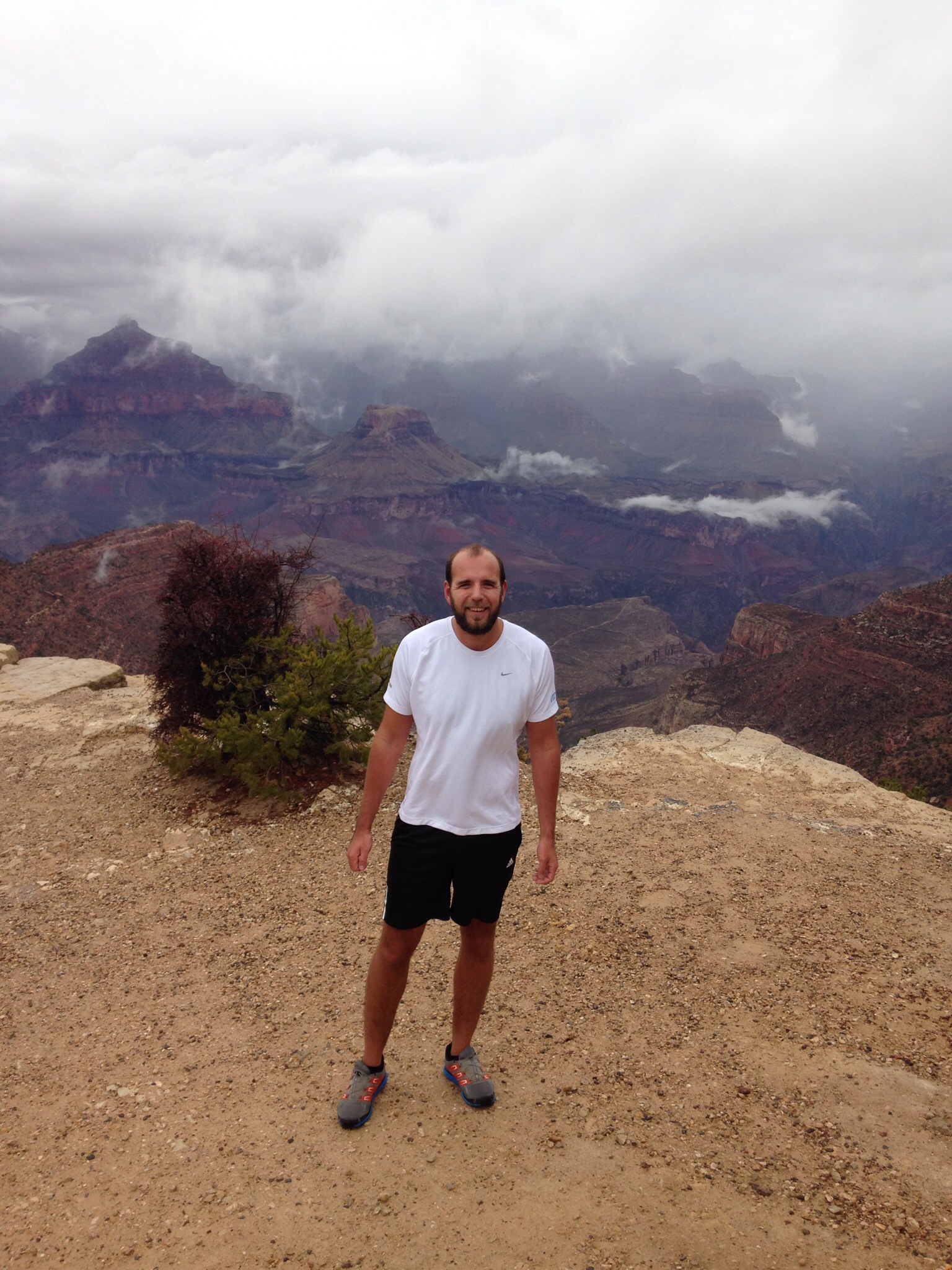 Unfortunately the rain didn’t hold off, so doing some hiking along the rim turned into driving the car along the Hermits trail on the rim, stopping at a few of the lookouts. Even though it was cloudy, there were still some spectacular views and they were probably more dramatic than those most people see in the summer. On the way out the park, we stopped off at the visitors centre which is meant to have a good viewpoint and realised we’d made the right choice in visiting the hermits trail as the viewpoint was much busier, but with not a lot to see! 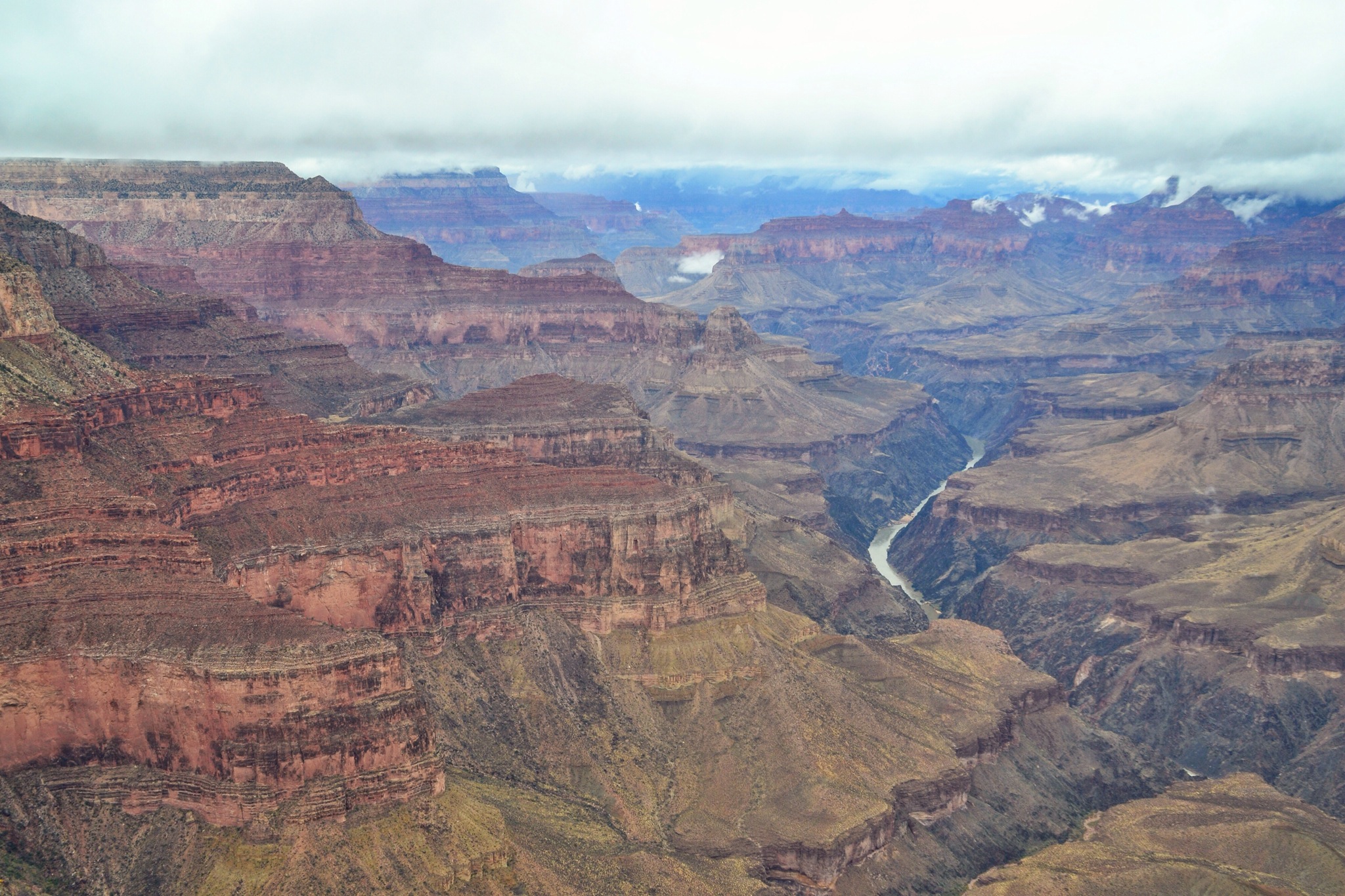 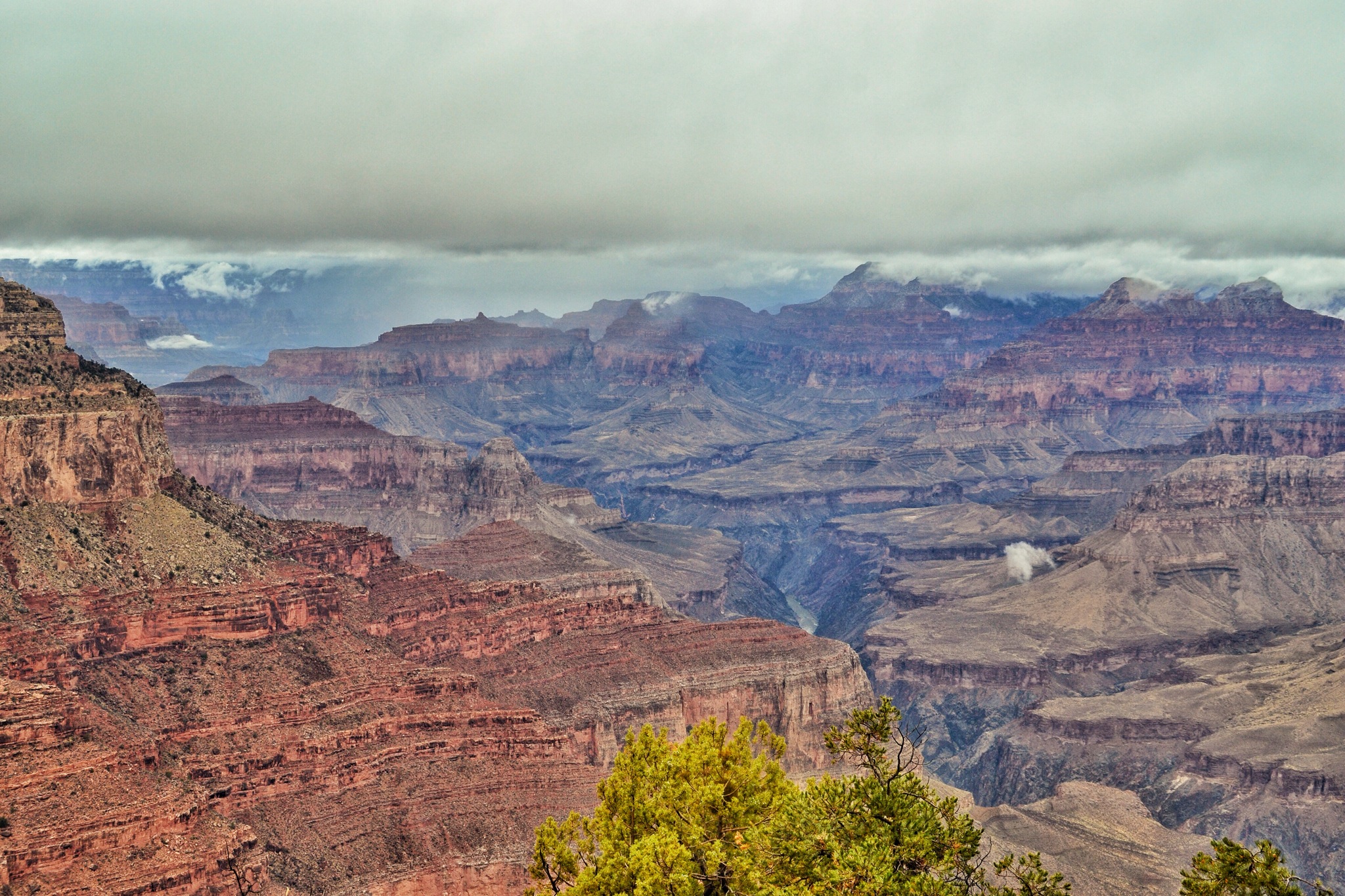 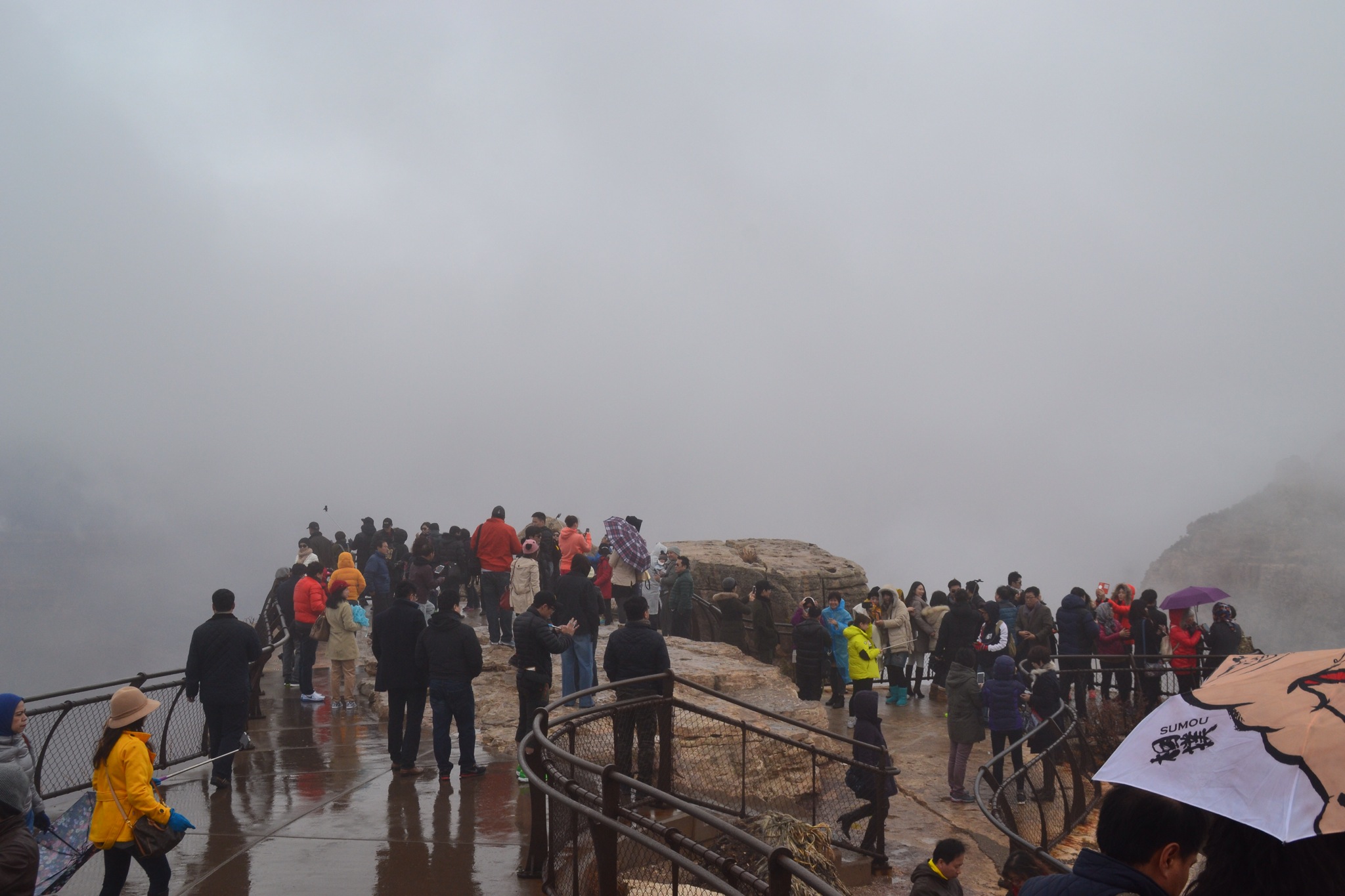 Typically, as we left Grand Canyon national park, the skies cleared up, giving us much nicer driving conditions on our way to our next stop of Las Vegas. Although we were unlucky with the weather for the Grand Canyon, it didn’t distract from the beauty. Staying on the rim was a great choice and I’d definitely recommend Bright Angel Lodge as a base for exploring.