Ubud is a city in the centre of Bali, often described as the cultural capital of the island. It’s made up of a few villages which have merged into one and so there are a few clusters of bars and restaurants within it. It has a different feel from the beach resorts of Bali as the King of Ubud is in charge here and has stopped the big chain hotels and restaurants moving in, except for Starbucks – I guess he likes his mocha frappuccinos.

When we picked our hotel, we didn’t have a big choice as we’d left it a bit late so we just went for the top rated one in our price range without spending too much time looking into it (if money is no issue, there are lots of very high end hotels here). It turned out to be a great choice, it was situated in the middle of the rice fields (complete with ducks) with two beautiful pools that were almost empty for most of the day. It was also close to some yummy restaurants. We ate some cheap but tasty and fresh Italian, Mexican and Japanese food while we were in Ubud. 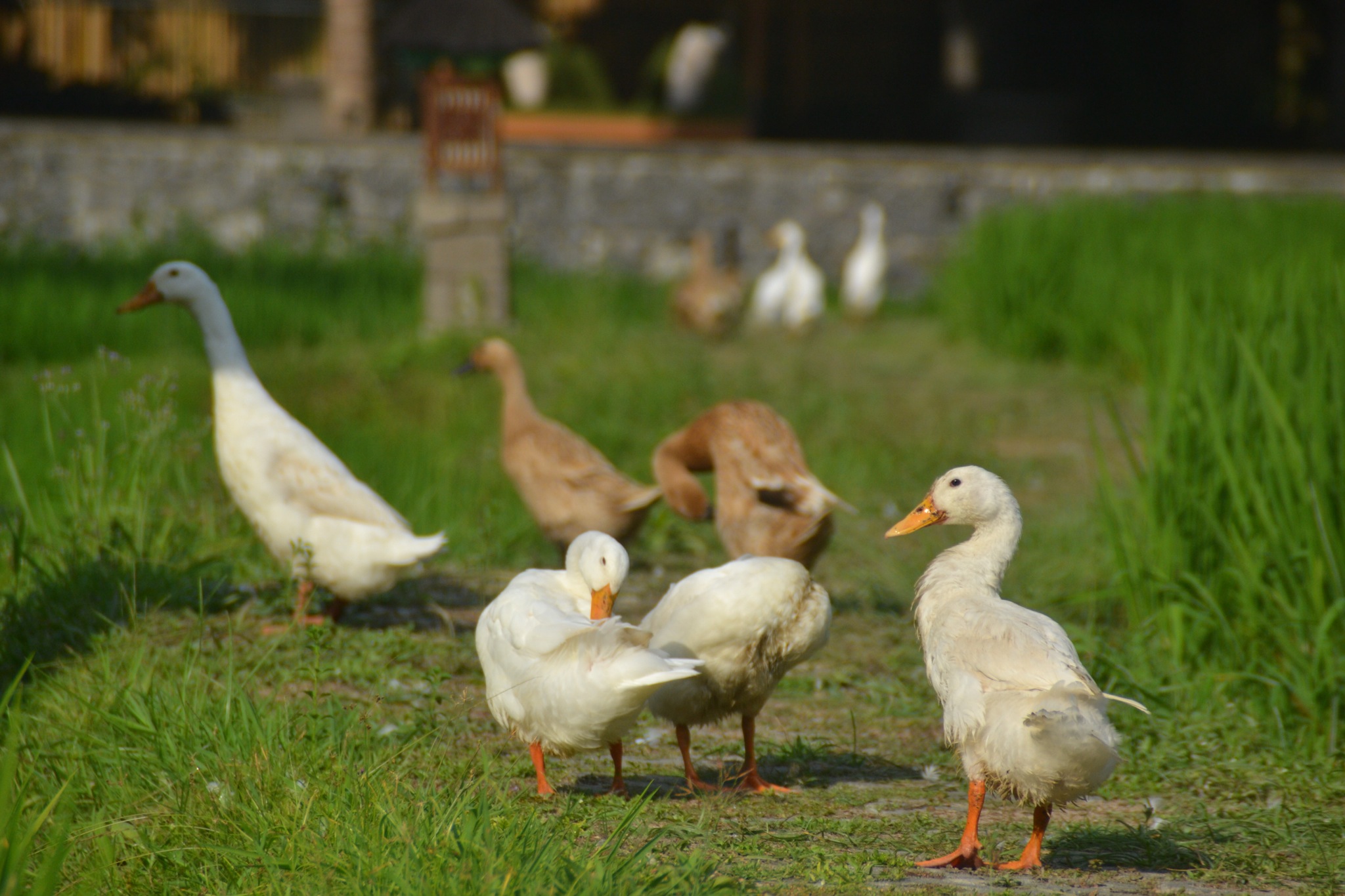 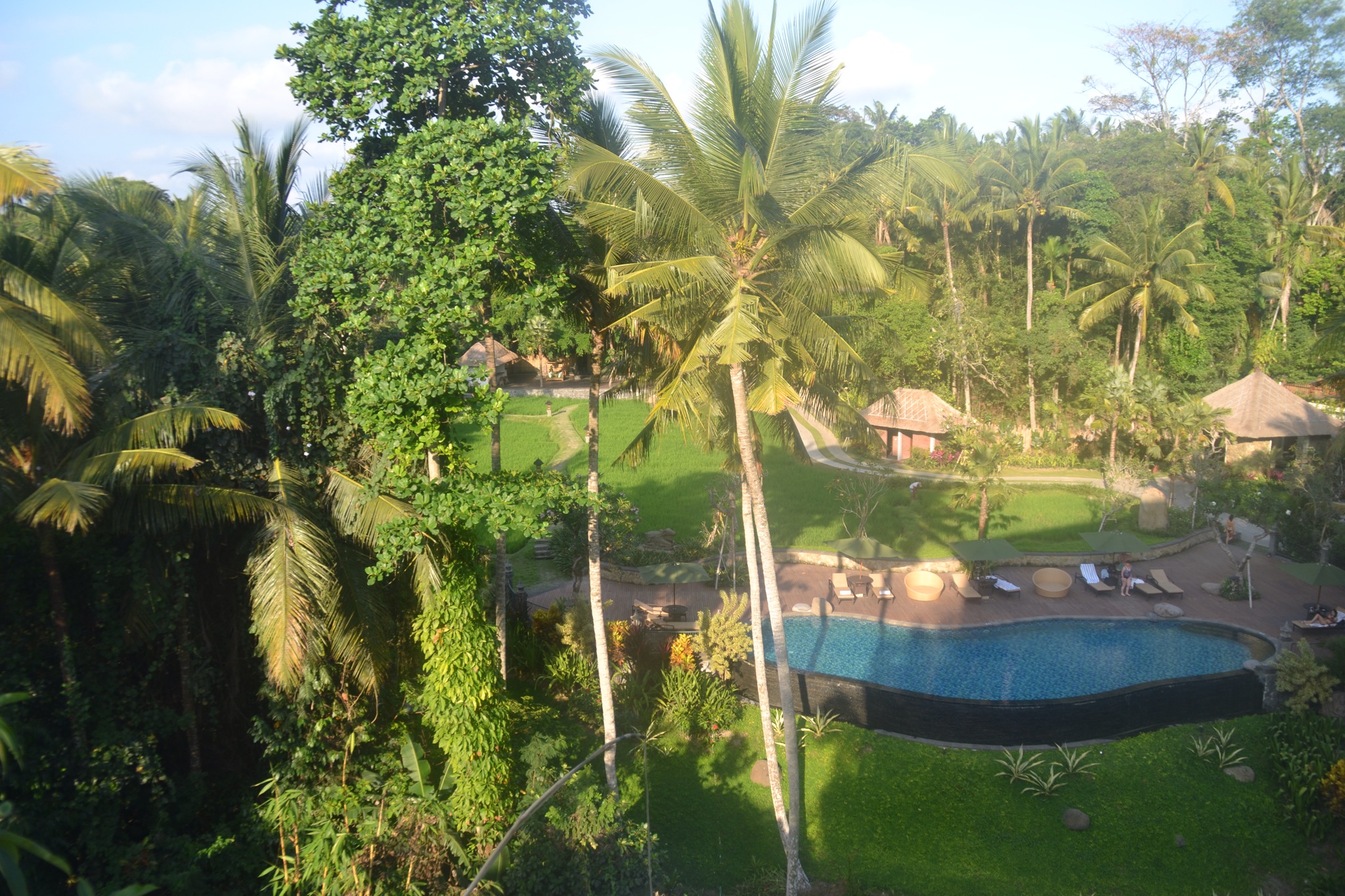 Ubud has a bit of a hippy feel to it. Lots of the cafés advertise being vegetarian, organic or vegan and there’s lots of yoga places around. It’s the town that’s featured in the book Eat, Pray, Love. I’ve started reading it, but not sure I’ll actually get to the Indonesia part before we leave Indonesia!

One of the main sights in Ubud is the Monkey Forest temples. This is as the name suggests a temple complex set in a forest which is overrun by long tailed macaques. We read quite a bit beforehand about how they really aren’t afraid of humans and have been known to bite – not what you want when Bali is in the midst of a rabies epidemic! I took my ring off (they like shiny things), sunglasses went in my bag and we made sure not to have any food. As it was, it seemed the monkeys would leave you alone if you left them alone, although we did see a girl who tried to stroke one gave her pretty pink hairband pulled off her head. When she tried to get it back, the monkey showed its teeth them proceeded to pull it apart! The temples themselves were nothing too impressive compared to other places we’ve been on the trip, but were interesting to see nonetheless. 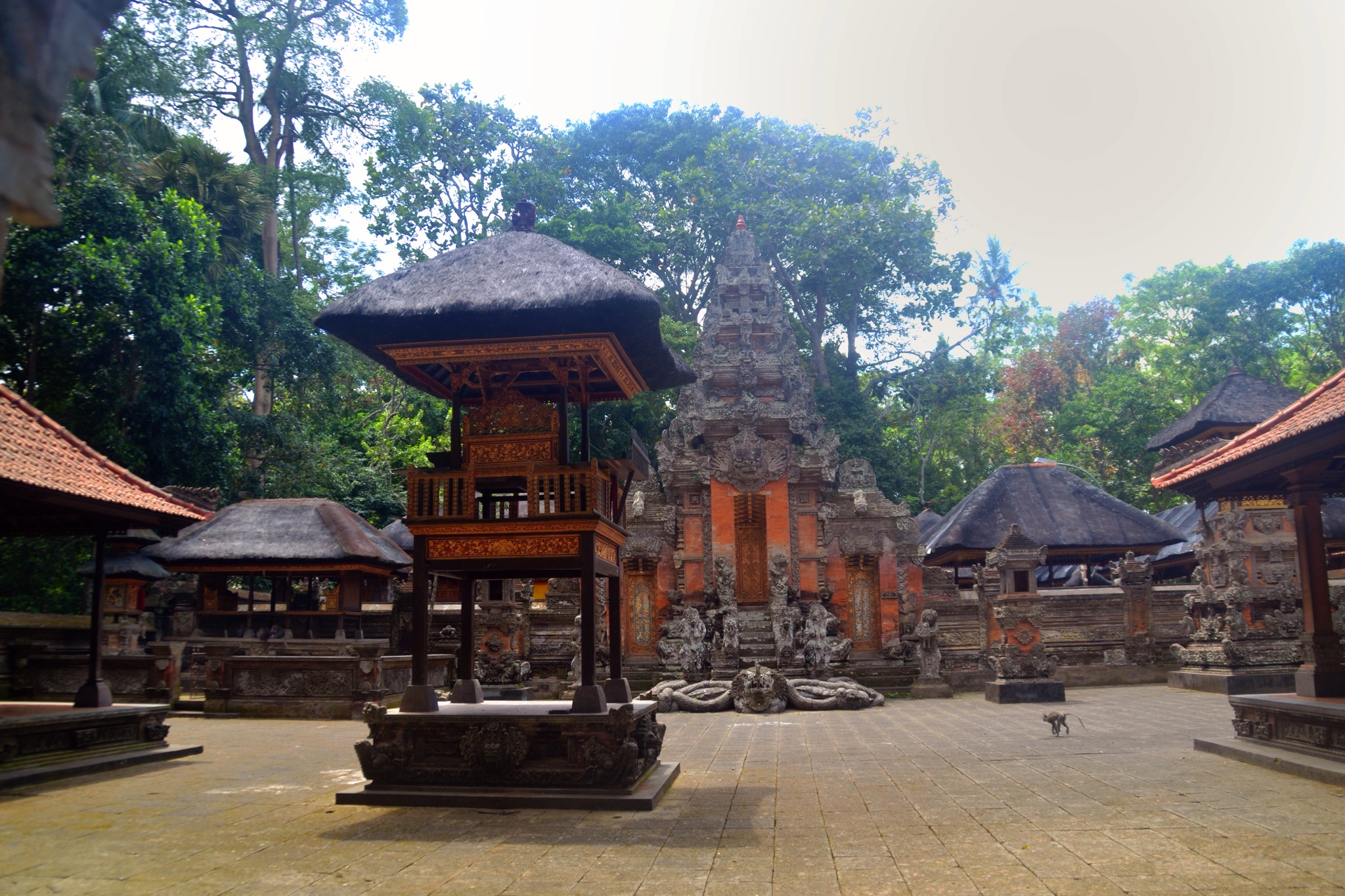 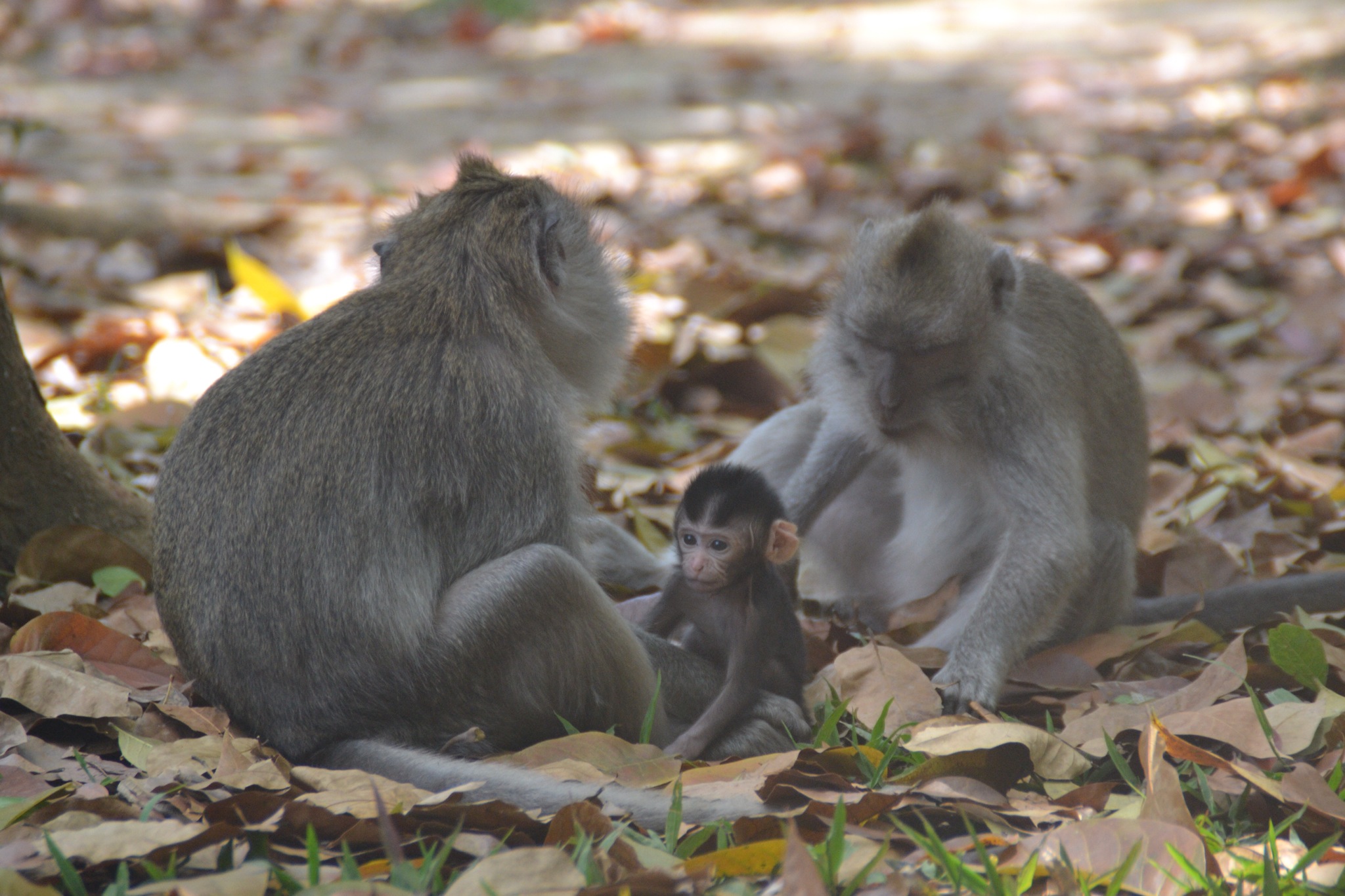 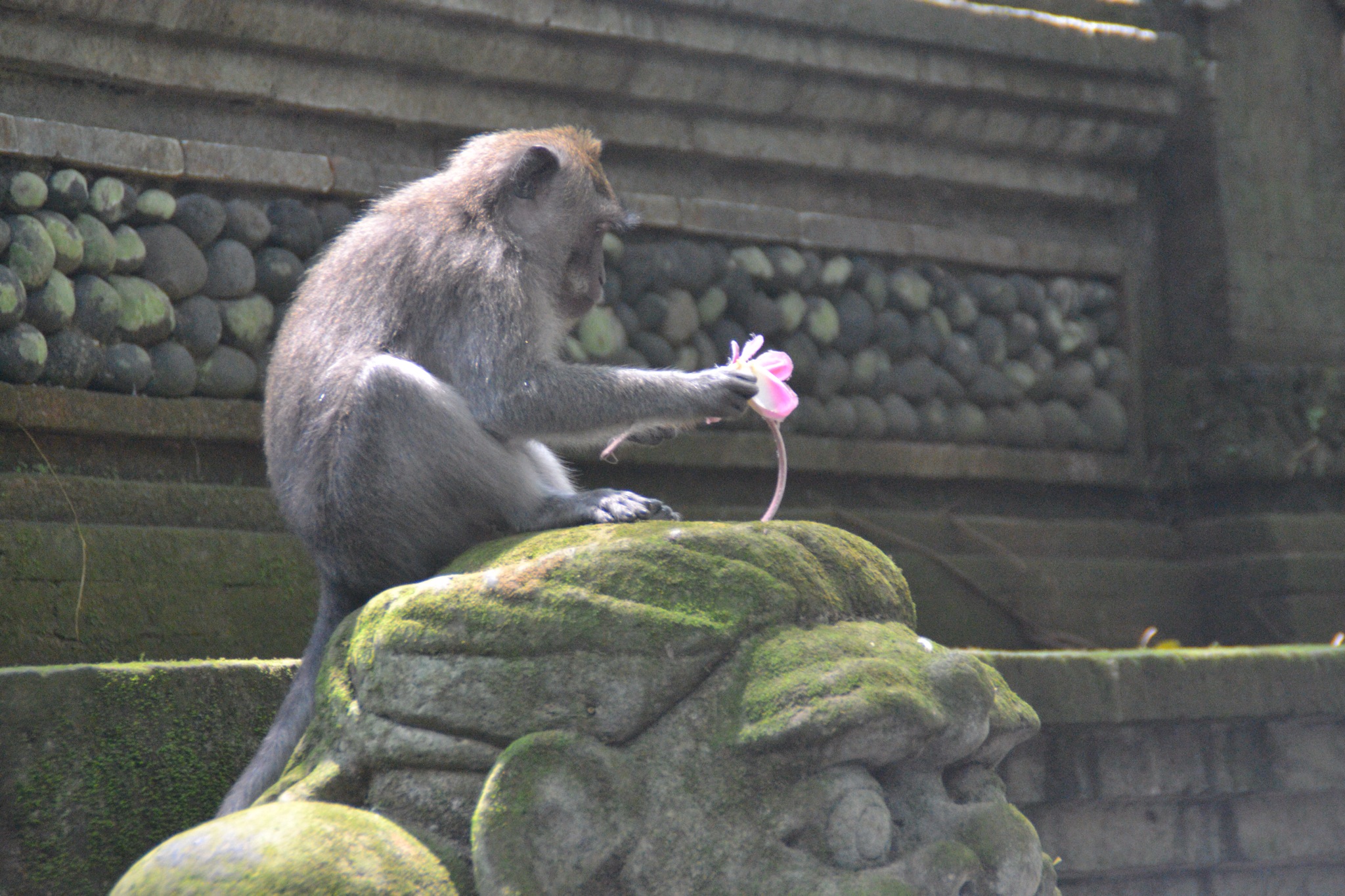 From the monkey forest, we walked up to Ubud palace where you can walk round the first couple of courtyards free of charge. We both really like the Balinese architecture, with its stone carvings.

The following day we decided to do one of the walks mentioned in our guidebook. It started with a walk along a ridge beside a river from where we could see rice farms, as well as some wild jungle. At the end of the ridge, there was a cafe with a view of rice terraces that was beautiful so we stopped here for some rehydration. After this, we were meant to turn left on a unmarked path which the guide book implied was after the village so we discounted an unmarked path before the village and then ended up taking a longer route following a steep and windy road which probably added a couple of kms to an already 10km walk! The book also made it sound like the second half of the walk would be the best part, walking through the fields, but when we found the turn, there was a sign warning us that it was a private drive and the guidebook is wrong….. thanks for that lonely planet! After the long walk we were exhausted so flopped by the pool for the rest of the day. 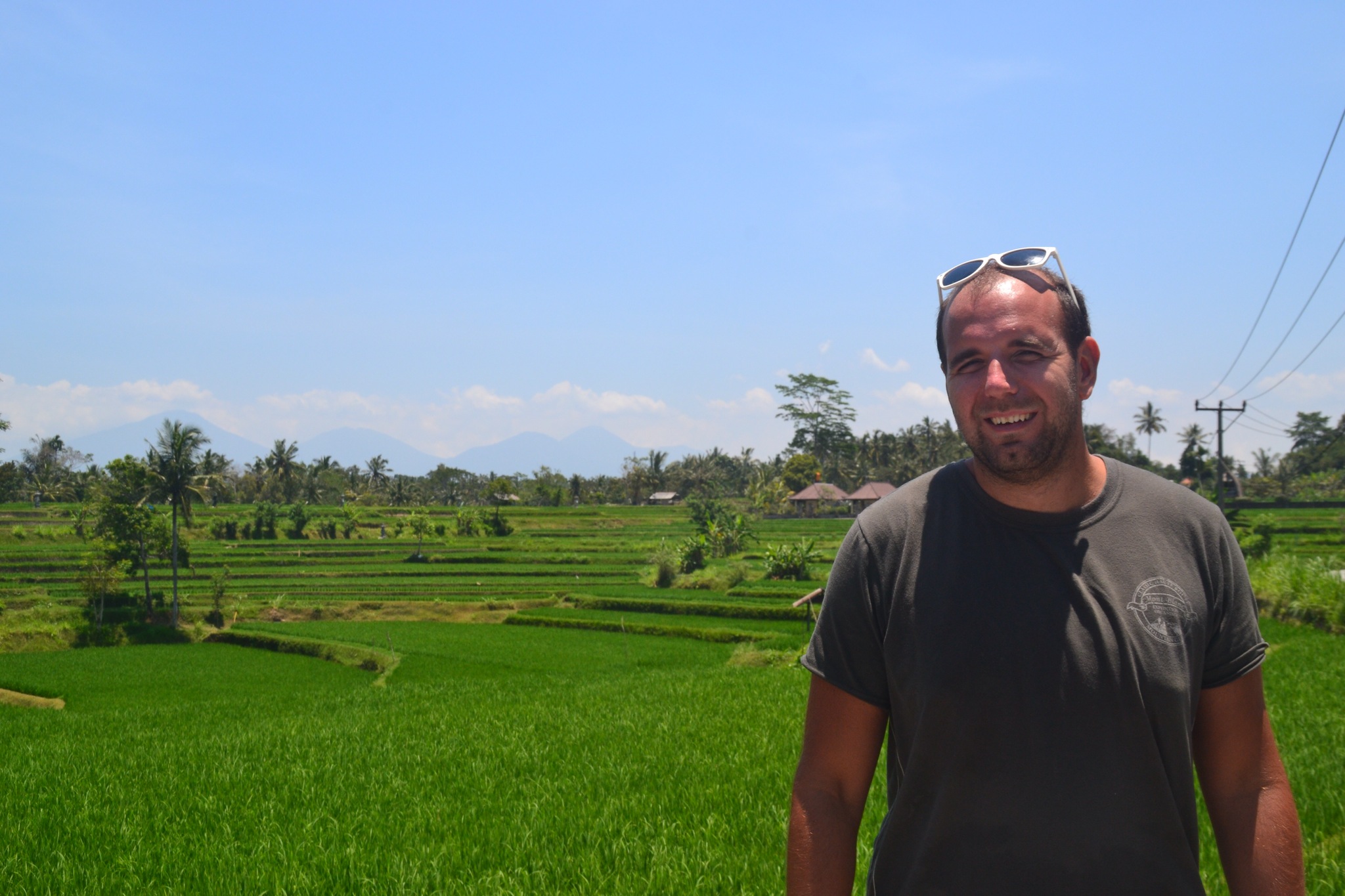 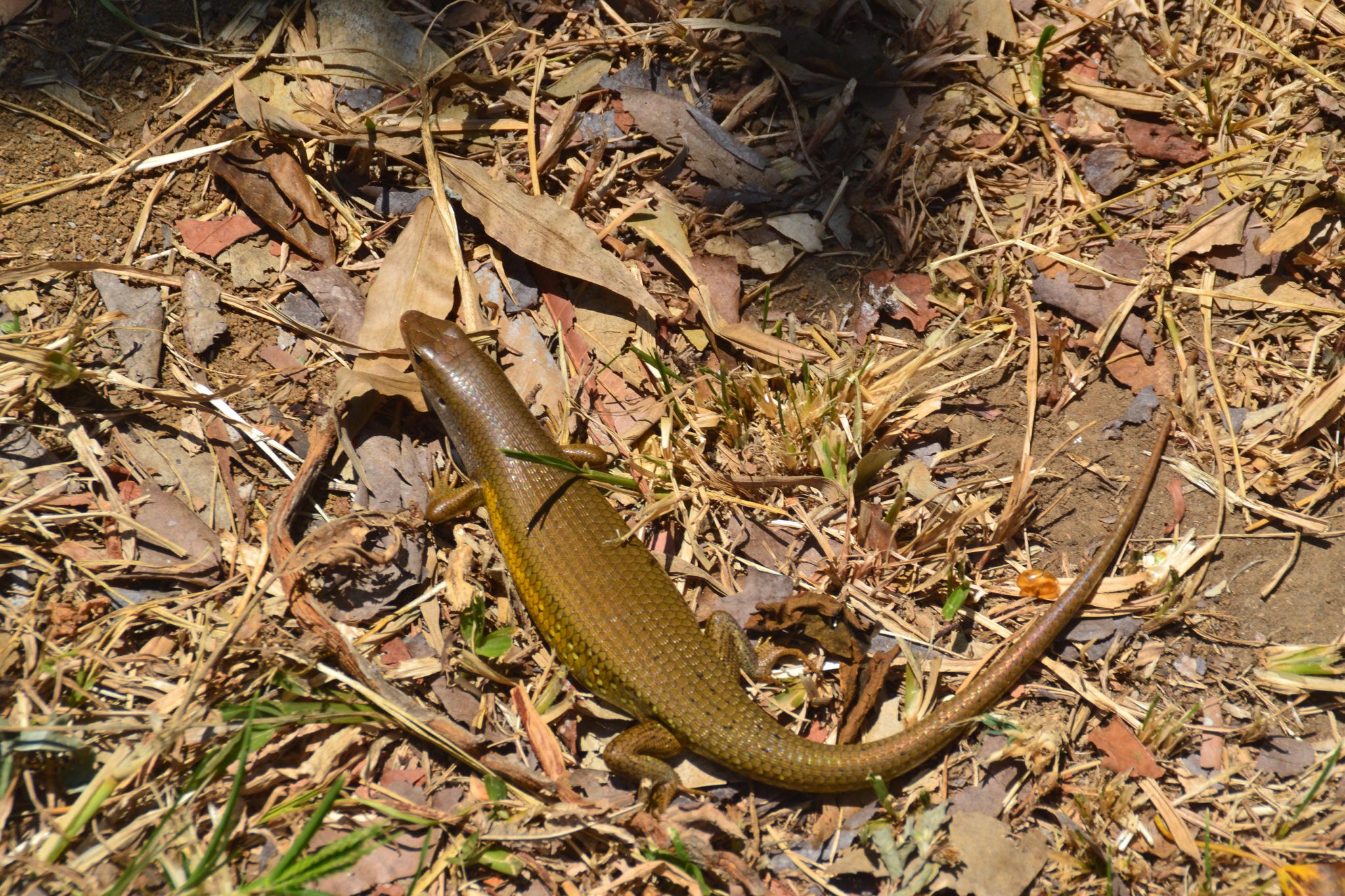 On our final day, we decided to hire a driver to take us to some of the further afield sights. At one point I’d had ambitious plans of waking at 2am one day to climb a volcano for sunrise, but a sore throat and lack of sleep due to coughing all night made me decide I probably wouldn’t enjoy it, so we decided to see the volcano from afar which was still pretty impressive. 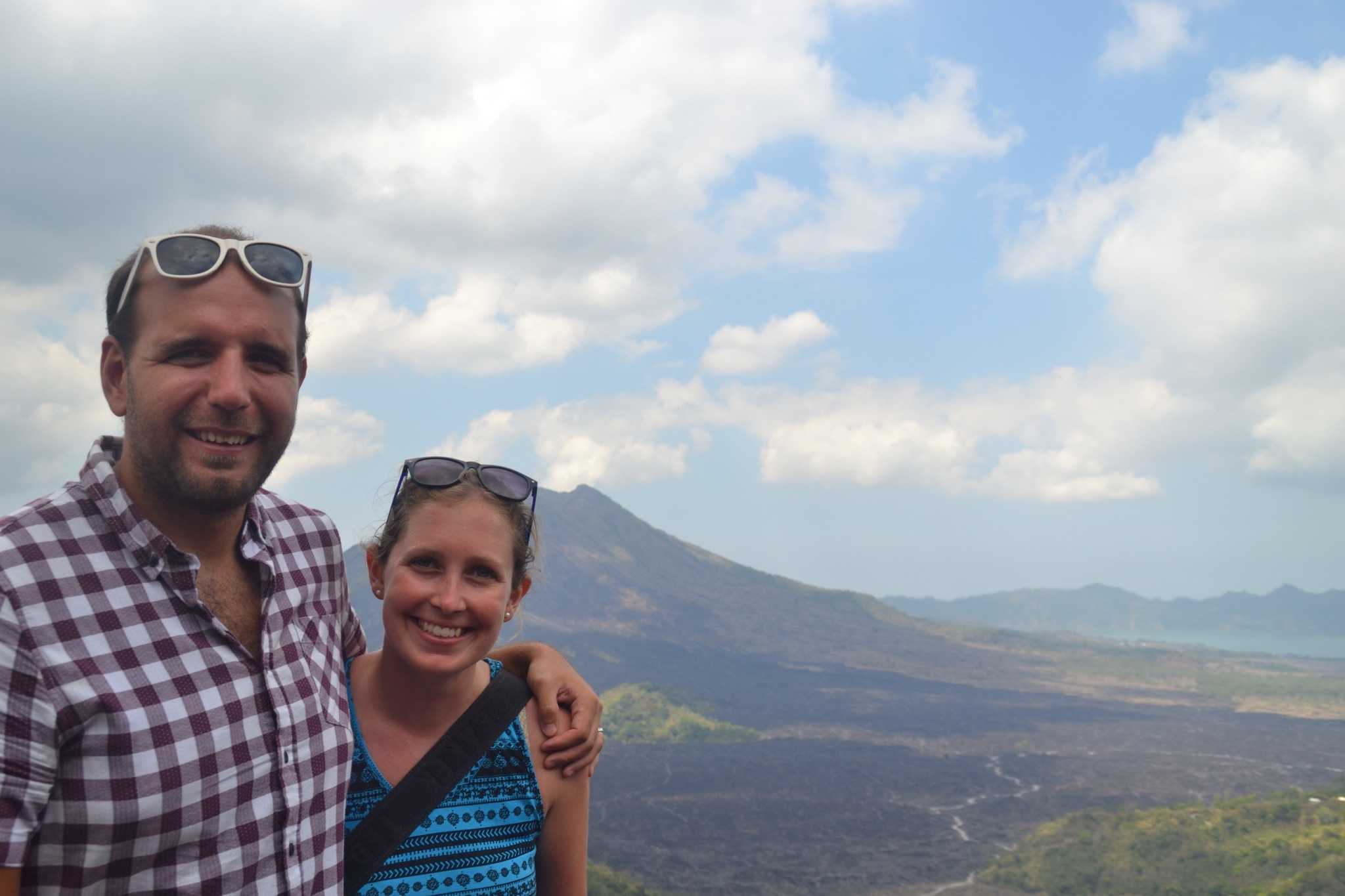 On the way to the volcano, we stopped at Tegallalang rice terraces which were really spectacular. This is the Bali I imagined. Along the road by the terraces, lots of touristy stalls have opened up but we walked down to the bottom and back up which although there were plenty of other people around was less crazy. We had to pay a couple of ‘tolls’ to farmers as we passed – £1 in total which I didn’t mind too much as it’s probably not great for their land to have tourists trampling all over it. The walk up and down was more of a scramble at some points and although at the time it didn’t feel too bad, our legs were still feeling it three days later. 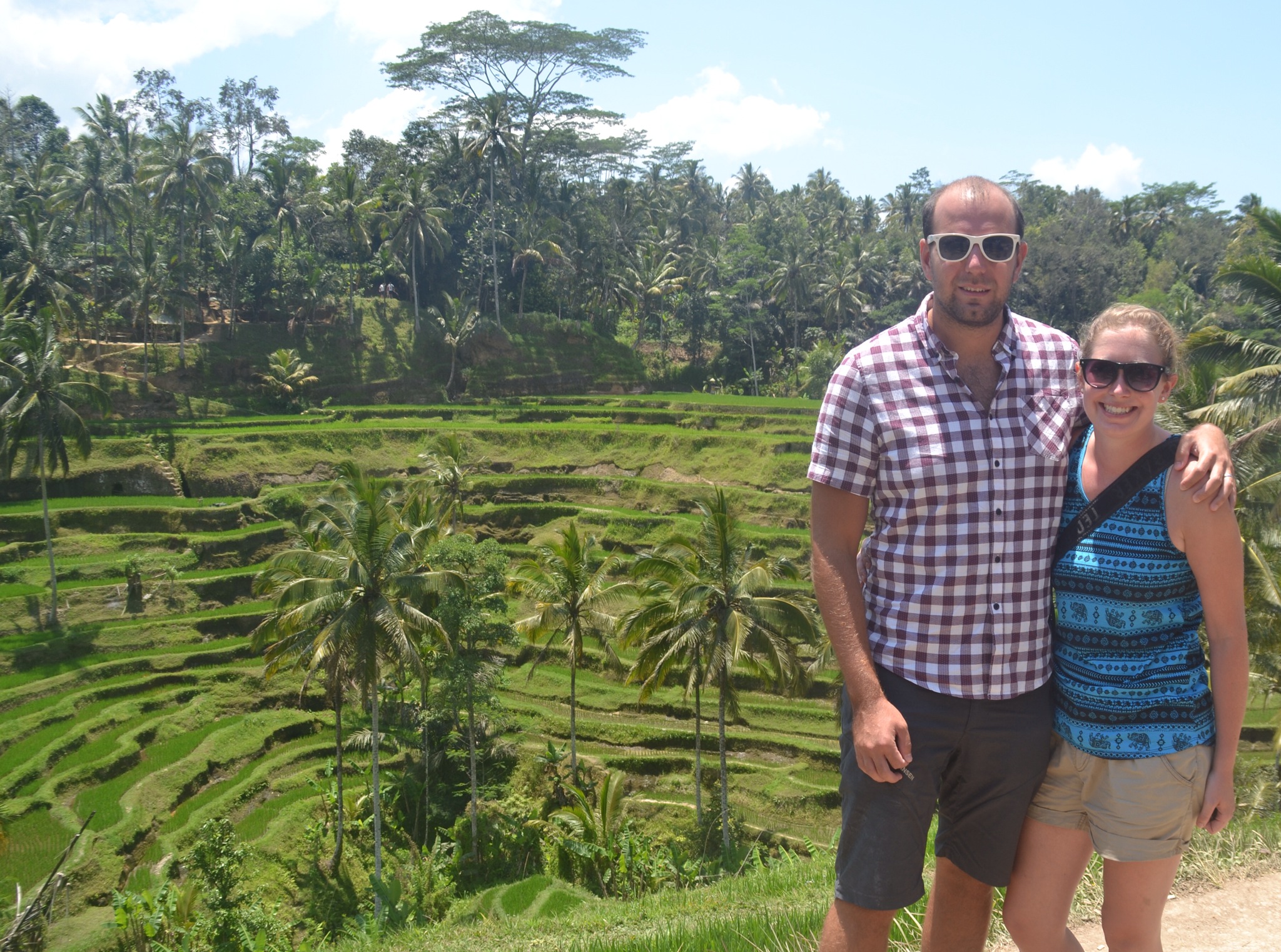 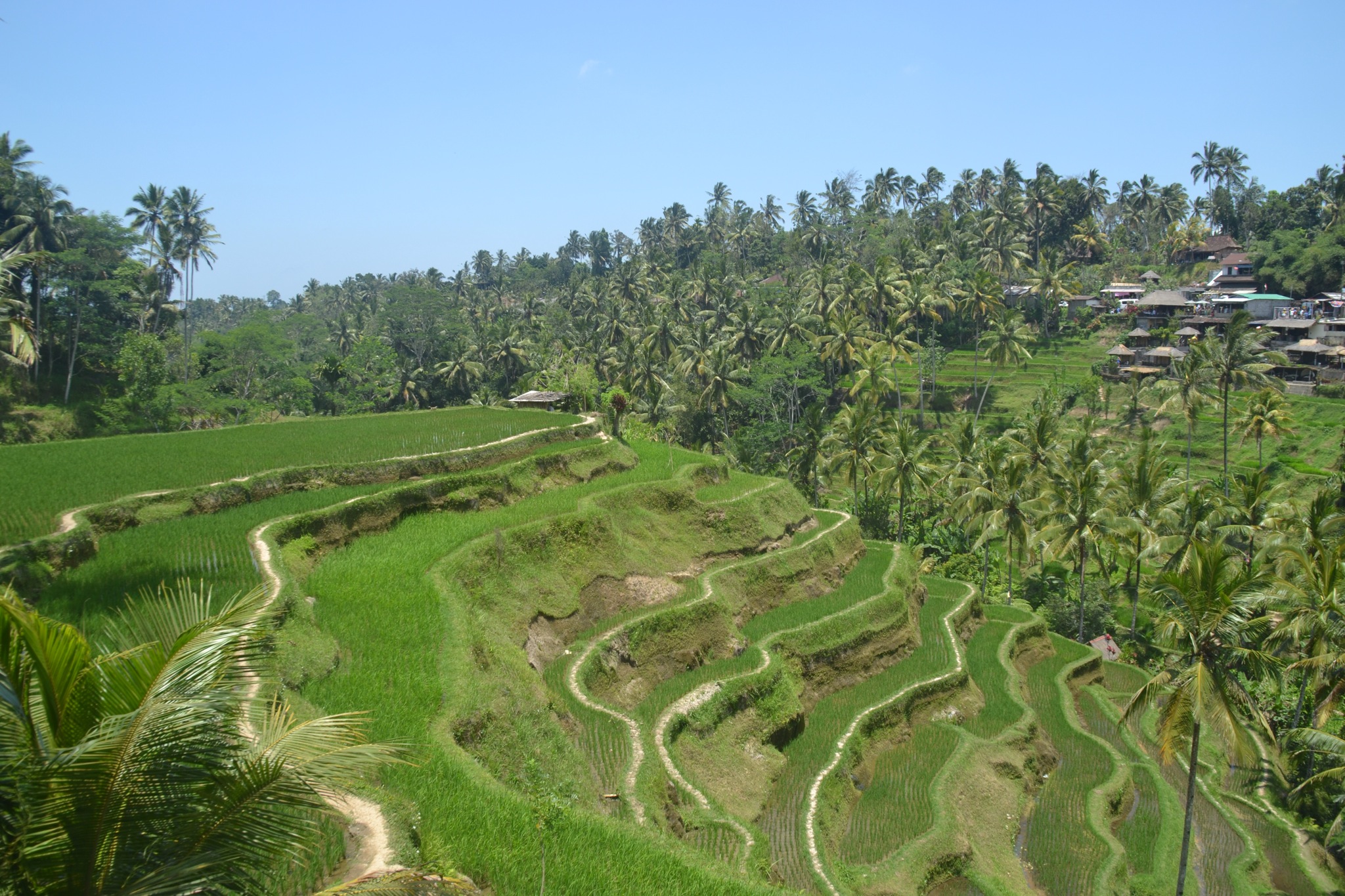 Next door to the rice terrace was a coffee plantation. In Indonesia they produce Luwak – the worlds most expensive coffee. The beans are eaten by a civet cat, and then the beans are taken from the poo before being roasted and ground. The plantation had a few civets on site which we could feed beans to and the we got to sample a cup of ‘poo’ coffee for £2.50. Neither of us are coffee drinkers, but we compared the smell of the Luwak and regular coffee and could tell the difference. 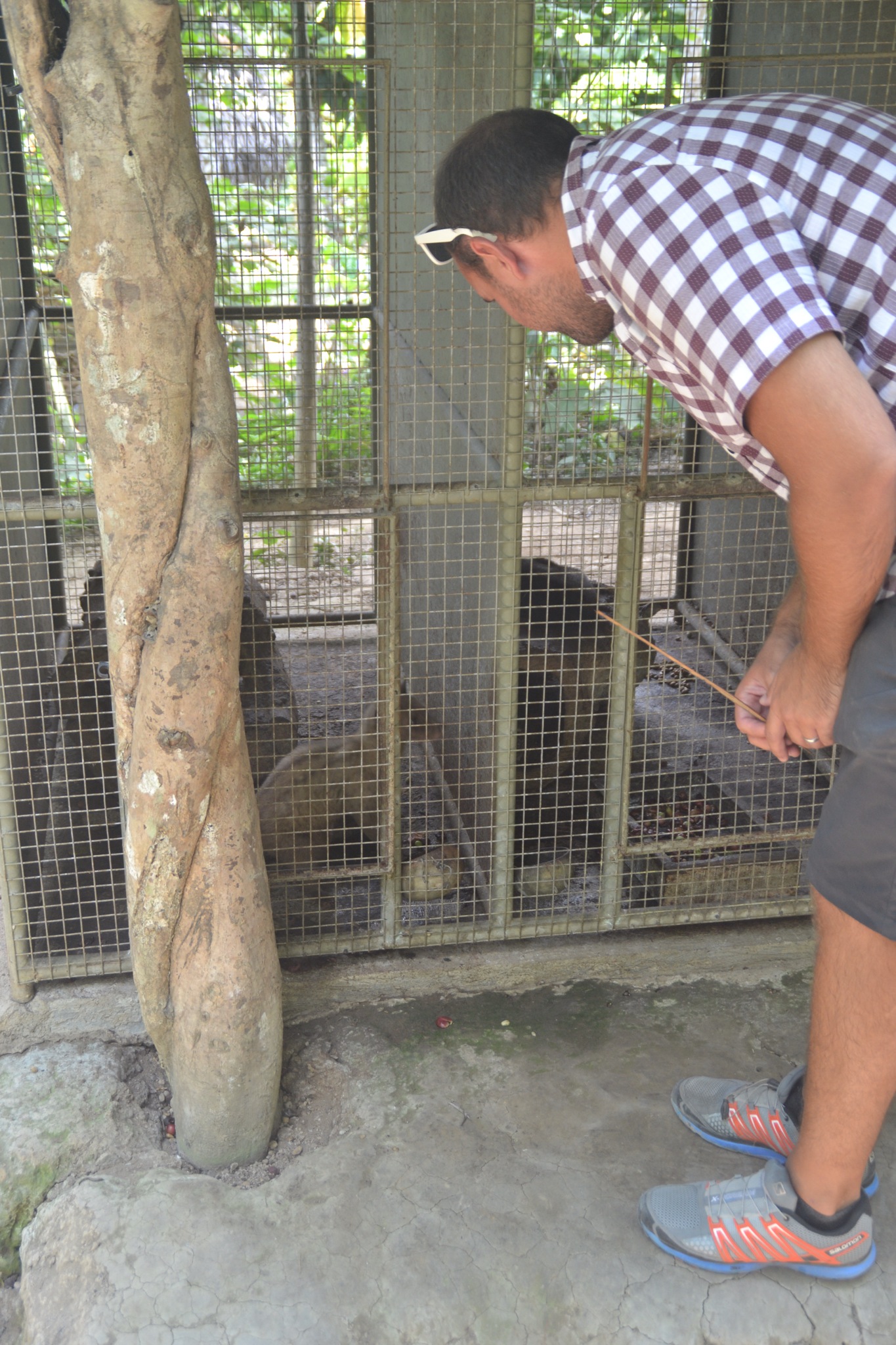 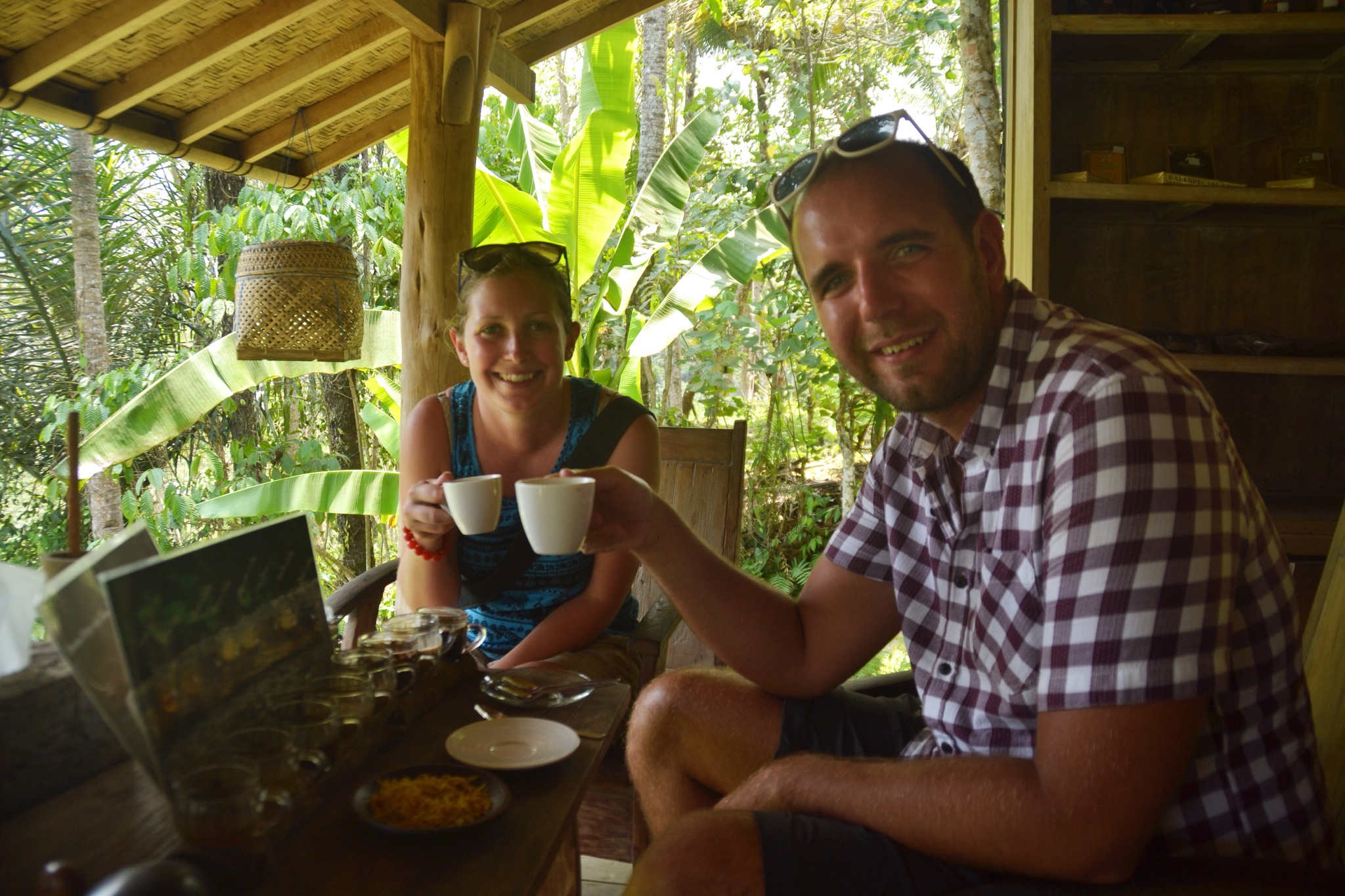 A last stop on the way back to the hotel was Goa Gajah or elephant cave temple. The cave was discovered by Dutch archaeologists in 1923 and probably dates to the 11th century and houses fragments of statues of the gods Shiva, Ganesha and the yoni. What was quite interesting was that a festival would be taking place in a few days time so the site was a hive of activity with the preparations. We saw women making the offerings that we’ve seen everywhere in Bali. People leave them on the pavement, on bridges, even at the entrance to nightclubs and they contain petals, incense and food – rice or biscuits. 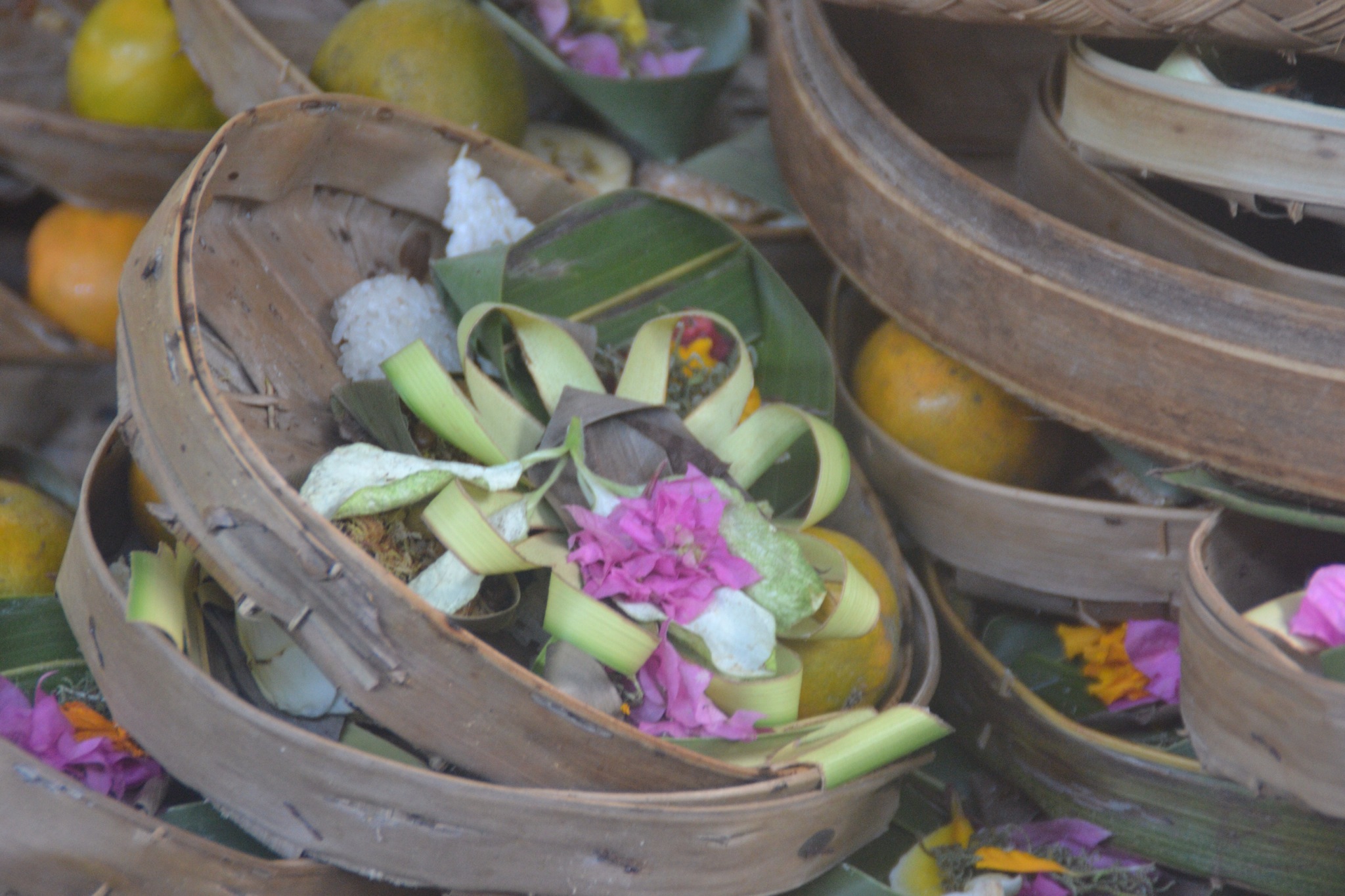 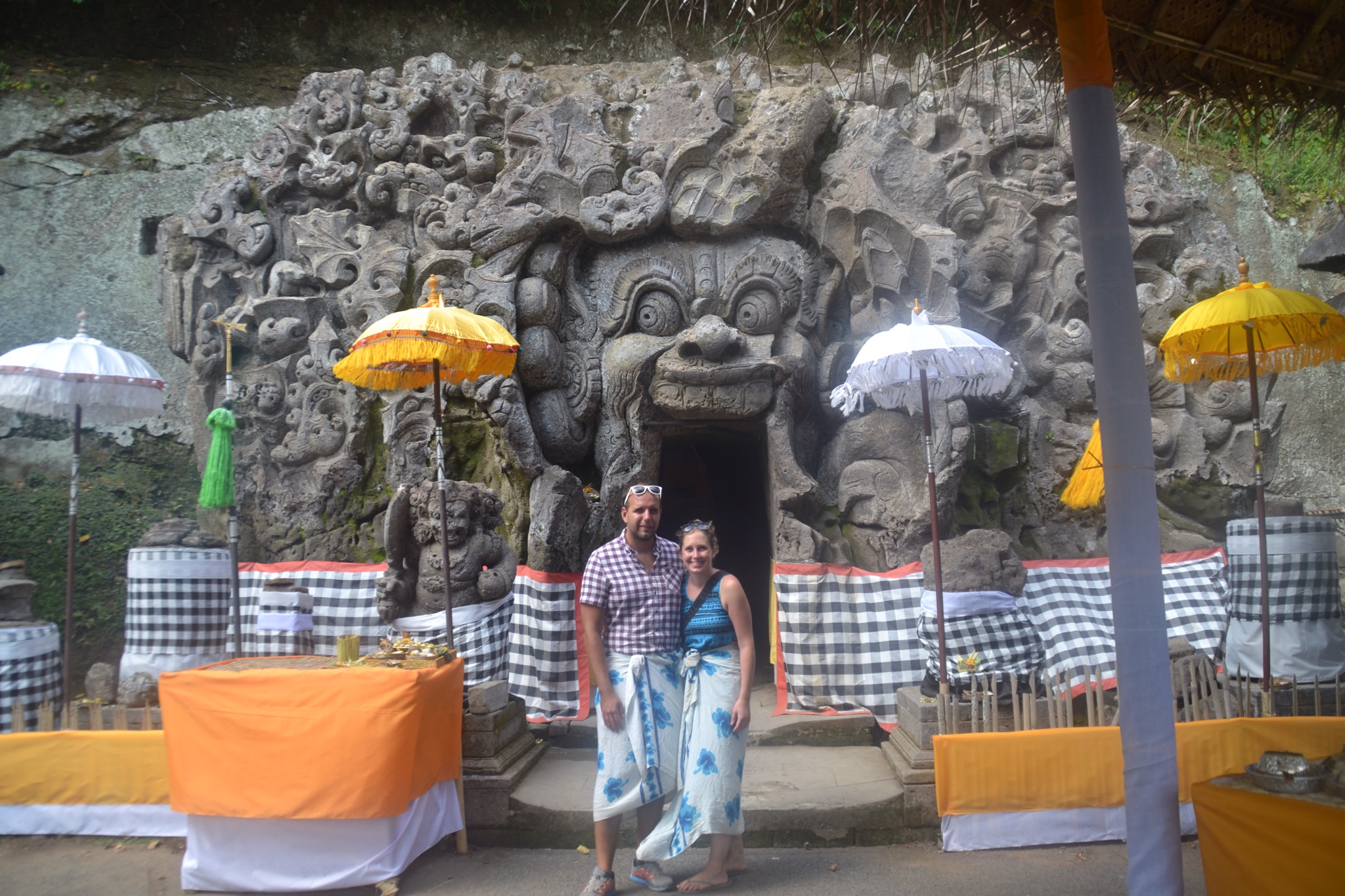 After Ubud, we had two more nights before leaving Bali which we spent in Kuta. Kuta is a few kms South of Seminyak where we’d previously stayed and is much closer to the airport. It’s known for being popular with Australians and backpackers and it did have a different vibe from Seminyak. The shops are all tourist tat shops compared with the upmarket boutiques in Seminyak and there are lots of fast food chains. The beach was much busier with surfers and rather than swish bars, it was lined with guys serving beers out of a cool box while you sat on plastic chairs. On our last night we paid a visit to Bali’s largest club which actually turned out to be one of the biggest clubs we’d ever been to. It had loads of different rooms, there was definitely something for everyone and prices weren’t too different than other bars in Bali, i.e. cheap. As this would be our last hot and sunny stop before we visit lots of cities, we spent some last hours reading by the pool.

After 3 months in SE Asia, we now head North East to China. We’re looking forward to it but will probably miss the sunshine!