Taipei was never on our original agenda, but we had some air miles from KLM to spend, which we could use with China Airlines and seeing as it was only an hour and a half from Hong Kong, we decided to hop across to the Republic of China (aka Taiwan) and see what it’s like.

Our initial impression was that it’s rainy! There was drizzle on and off for the whole four days we were there, feeling almost like a miserable English autumn day, whilst being around 28 degrees. We arrived late afternoon and took a walk to find an English bookstore as Dean was after a book which wasn’t available on kindle. We found he bookshop, but not the book! On the plus side though we found a great place for a hotpot dinner. They had no English menus, but they did have one member of staff who could speak English and explain it to us. It turned out it was all you can eat and cost only £10 each – bargain!

The next day we took a walk to the Chiang Kai-shek memorial hall. Chiang Kai-shek was the leader of the Republic of China during the Chinese Civil War during which he was defeated by the communists and retreated to Taiwan in 1949. As president of the Republic of China, he claimed sovereignty over all of China and this was also recognised by the UN until 1971 when the UN accepted the communists as the legitimate government of China. Still today, although we generally view Taiwan as a separate country and it operates as one, it’s not recognised as such by the UN and when talking about the ‘other’ China in Taiwan, you should be careful how you refer to it and what you say! Calling it mainland China is apparently safest. Anyway, history lesson over, we arrived at the memorial just in time for the changing of the guards, not a patch on Buckingham Palace, but interesting to see nonetheless. Underneath the main hall was an exhibition giving some details about his life. 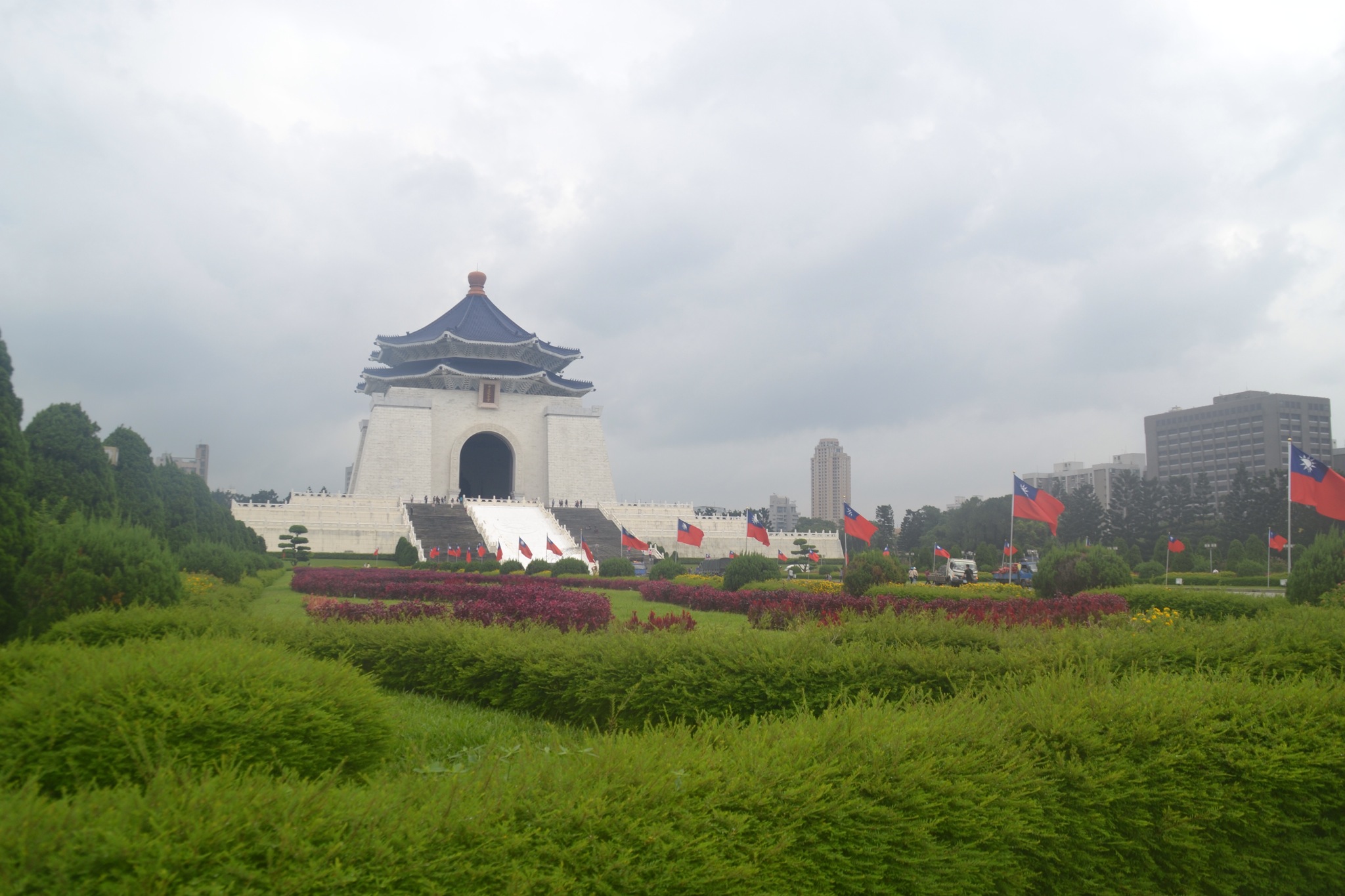 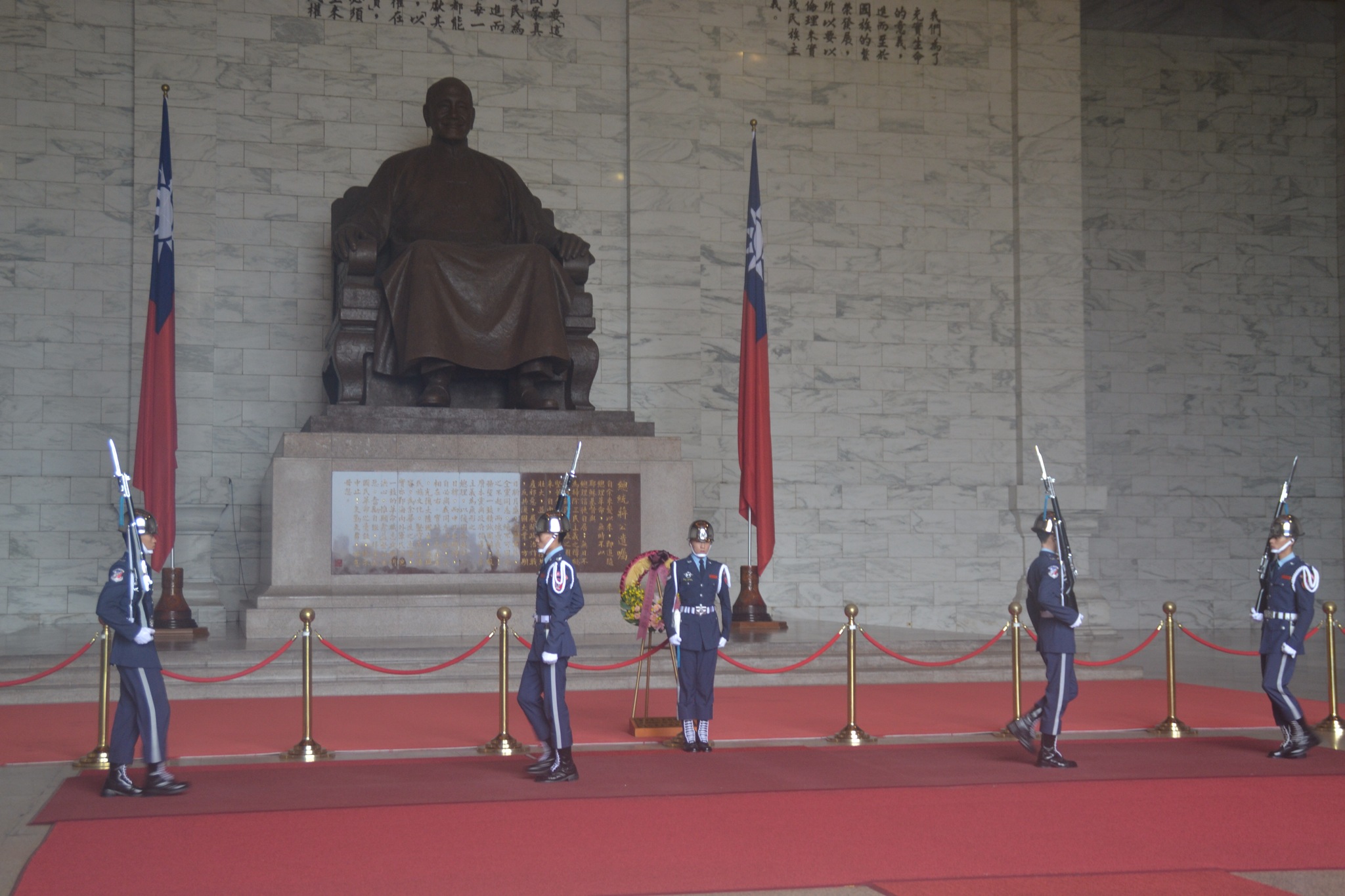 After that, we took a walk through a bit more of the city, including along ‘wedding shop road’ which as you might have guessed is a whole street with dress shops, cake shops, flower shops and photography studios. 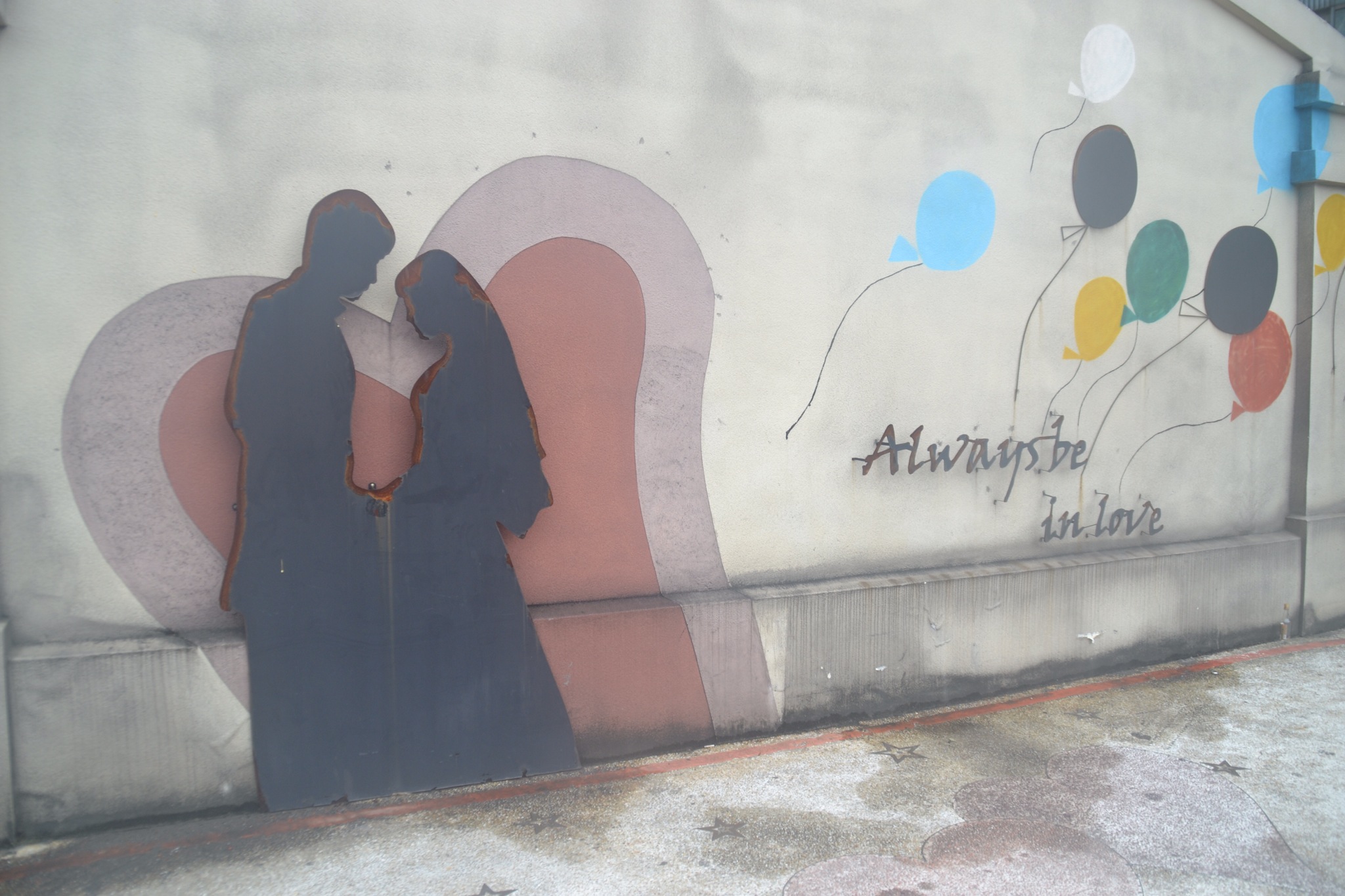 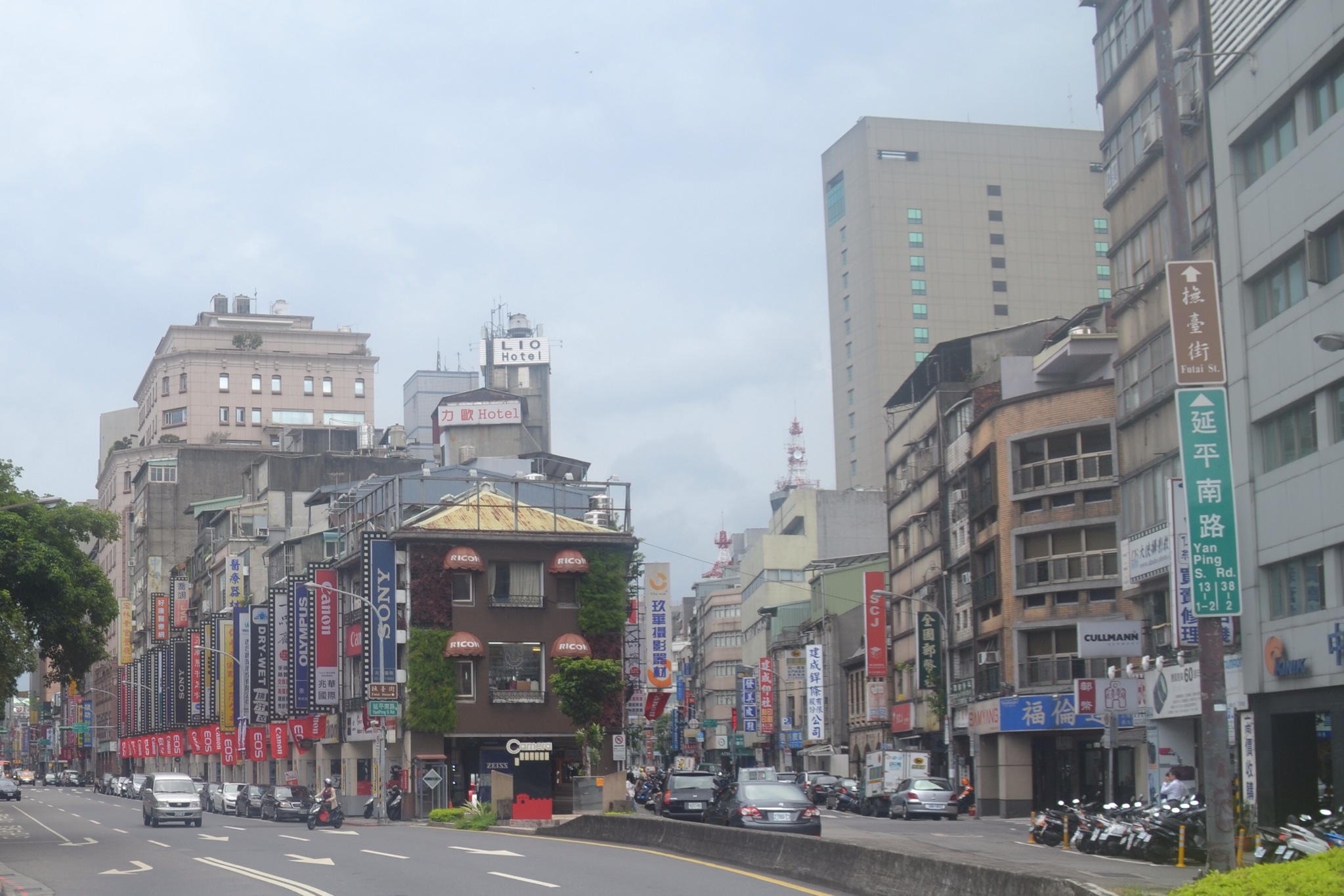 In the evening, after a steak dinner, we found a secret cocktail bar called Ounce not far from our hotel. The front was a cafe, but at the back there was an unmarked door which led to the bar. There was no menu, instead we just told the barman what we liked and he made us yummy cocktails based on that. 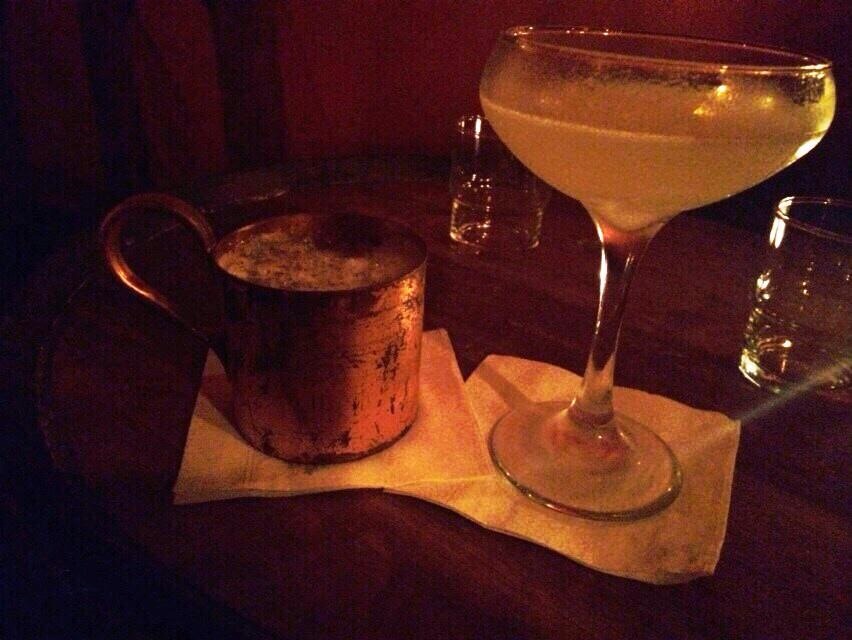 The following day, we headed for Taipei’s most famous landmark, Taipei 101. We had thought that it was the second tallest building in the world, but it turns out the Chinese have been busy building lots of skyscrapers and it’s now 6th. It is designed to look like bamboo and really stands out as there are not too many other tall buildings in the city. From the top, you can see how the city is penned in by the surrounding hills. Inside there was a pretty good exhibition describing the city, as well as the damper in the building which they are so proud of that they’ve given it it’s own cartoon character, damper baby. 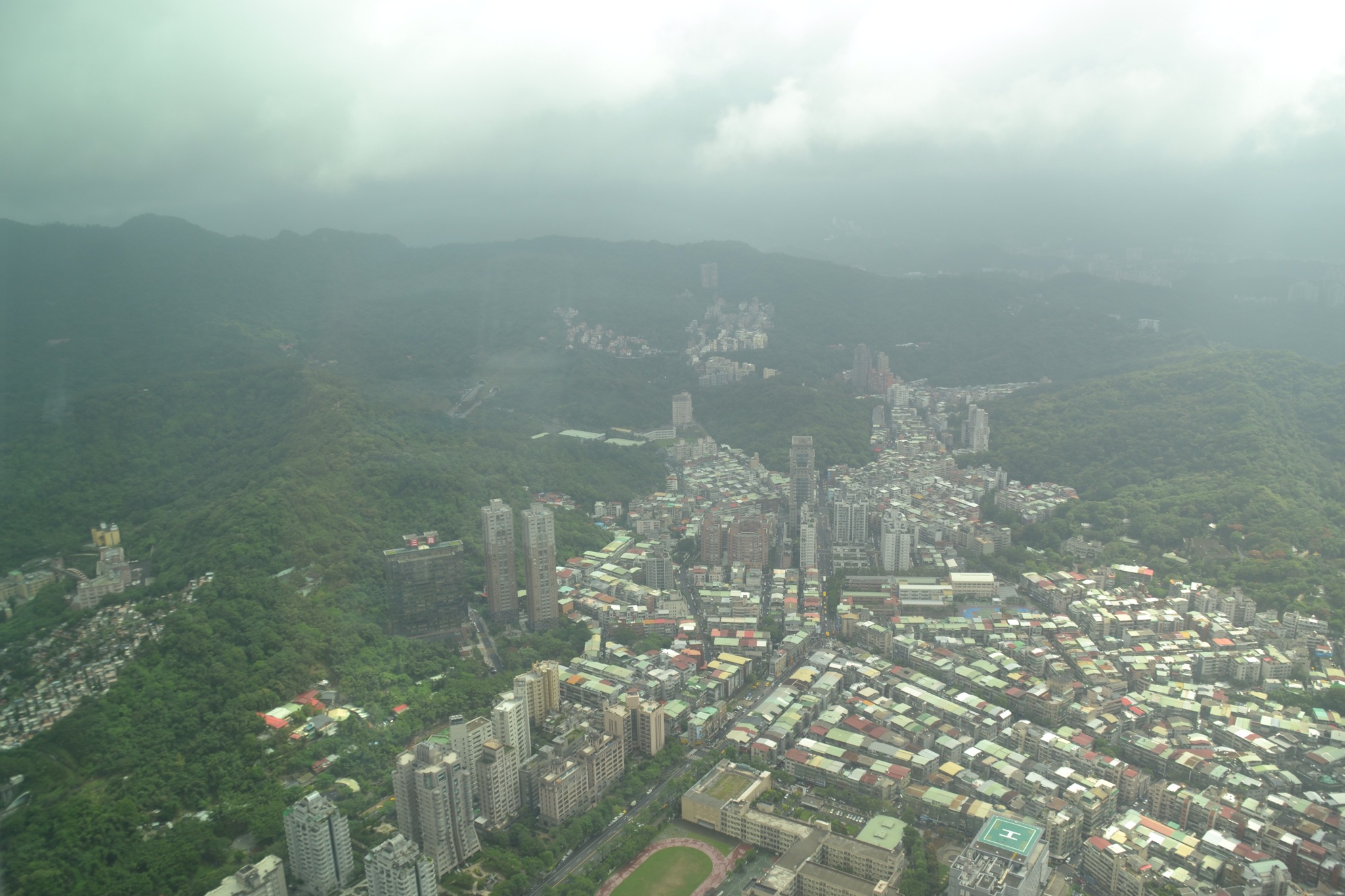 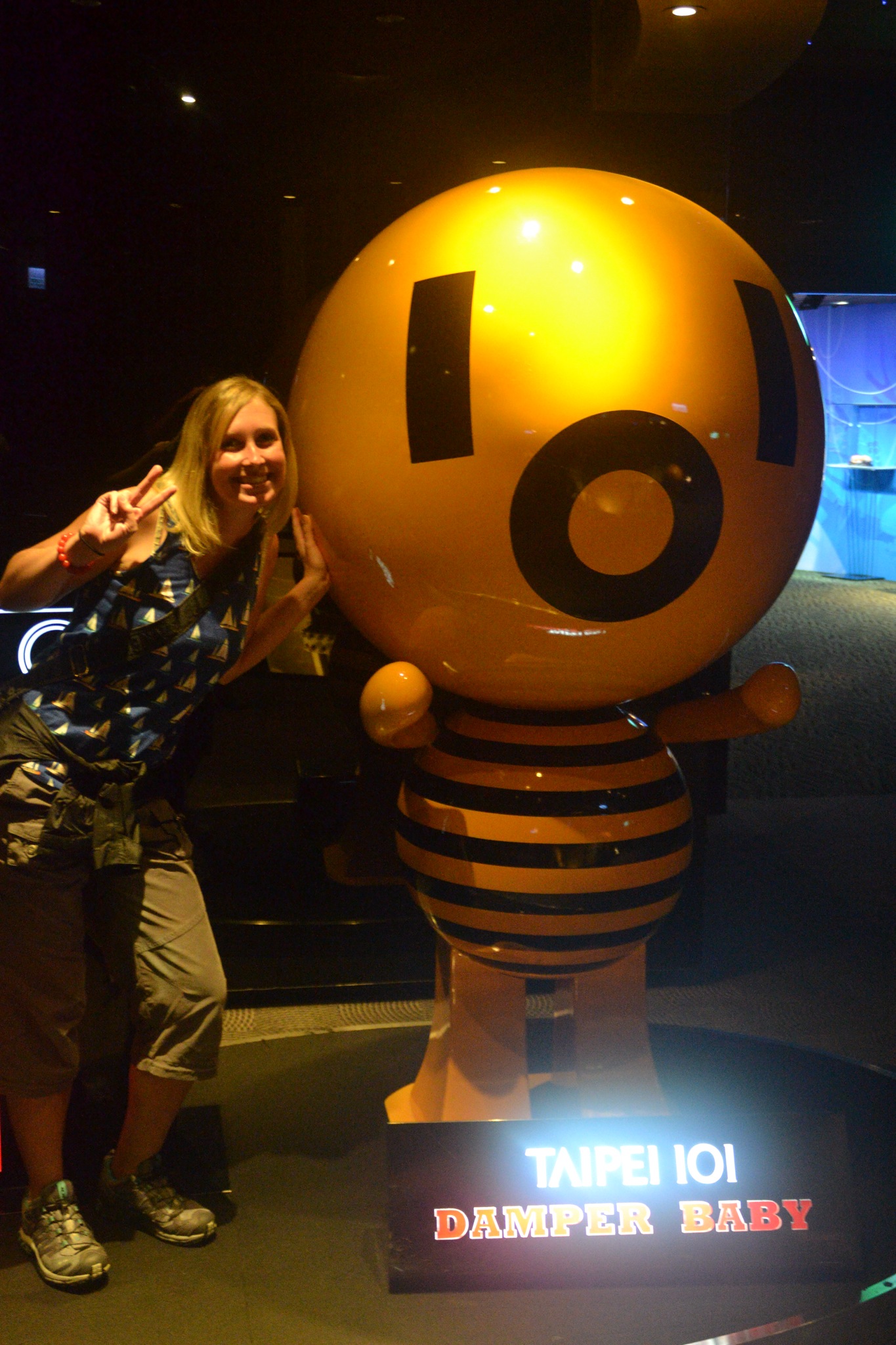 After going up the tower, we went to the Sun Yat-Sen memorial hall, which was pretty similar to Chiang Kai-shek’s, but with a different statue! The surrounding gardens gave a great view of the tower though. 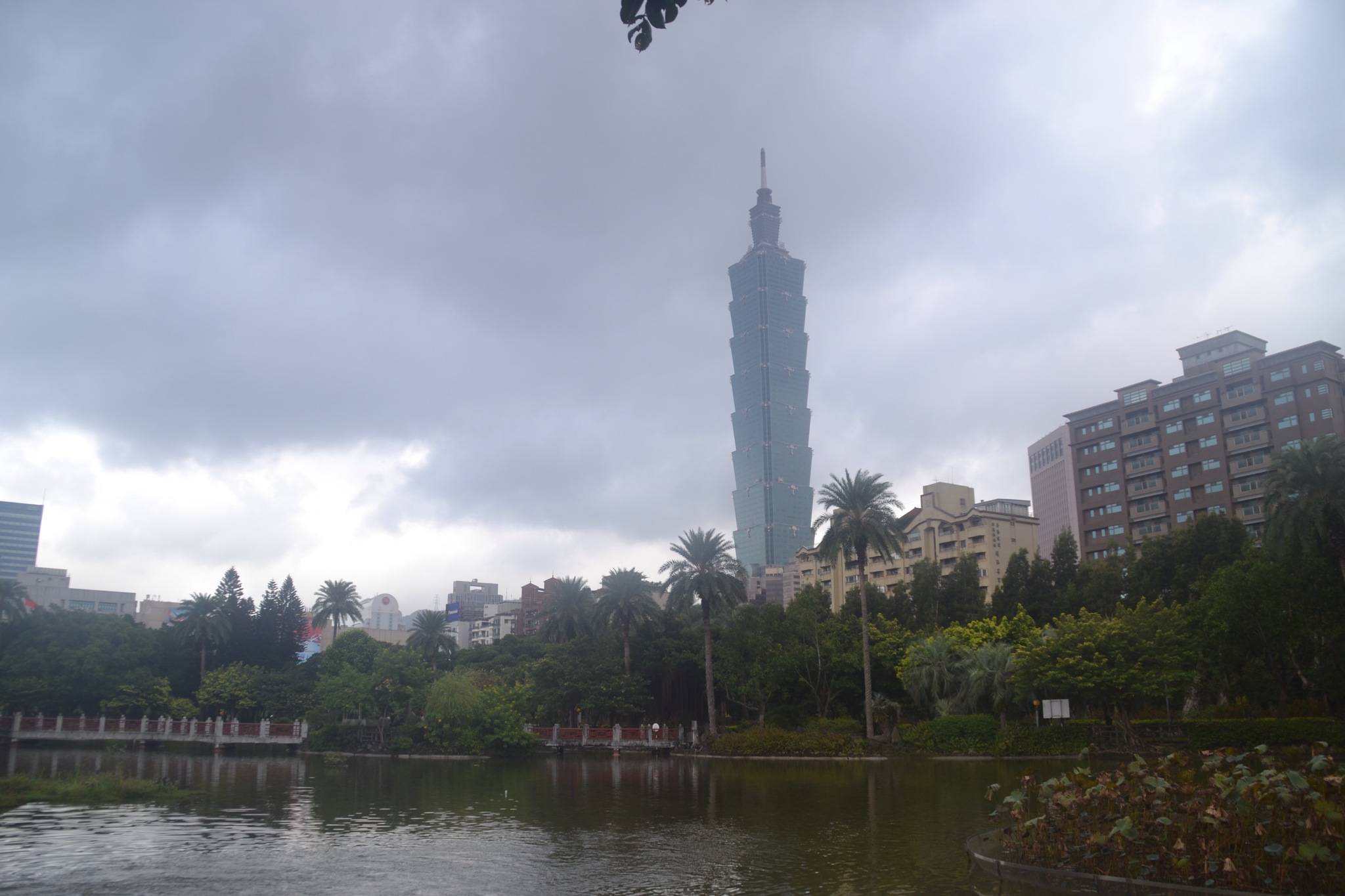 On our last day in Taipei, we headed over to Taipei zoo to see the pandas. The zoo was huge and cost a bargainous £2.50 to go in. We visited all the areas, although it seemed most people made a beeline for the pandas. When we got there, it seemed everyone else had a timed entry ticket, so we played the stupid foreigner card and snuck in with the current viewing. The pandas were in their own building which had signs at the entrance asking you to be quiet, however this seemed a bit pointless as the zoo staff themselves had microphones which they were using to tell everyone to keep moving. They have two pandas at the zoo, but unfortunately we couldn’t read any of the information about them due to the fact we weren’t allowed to stand still! 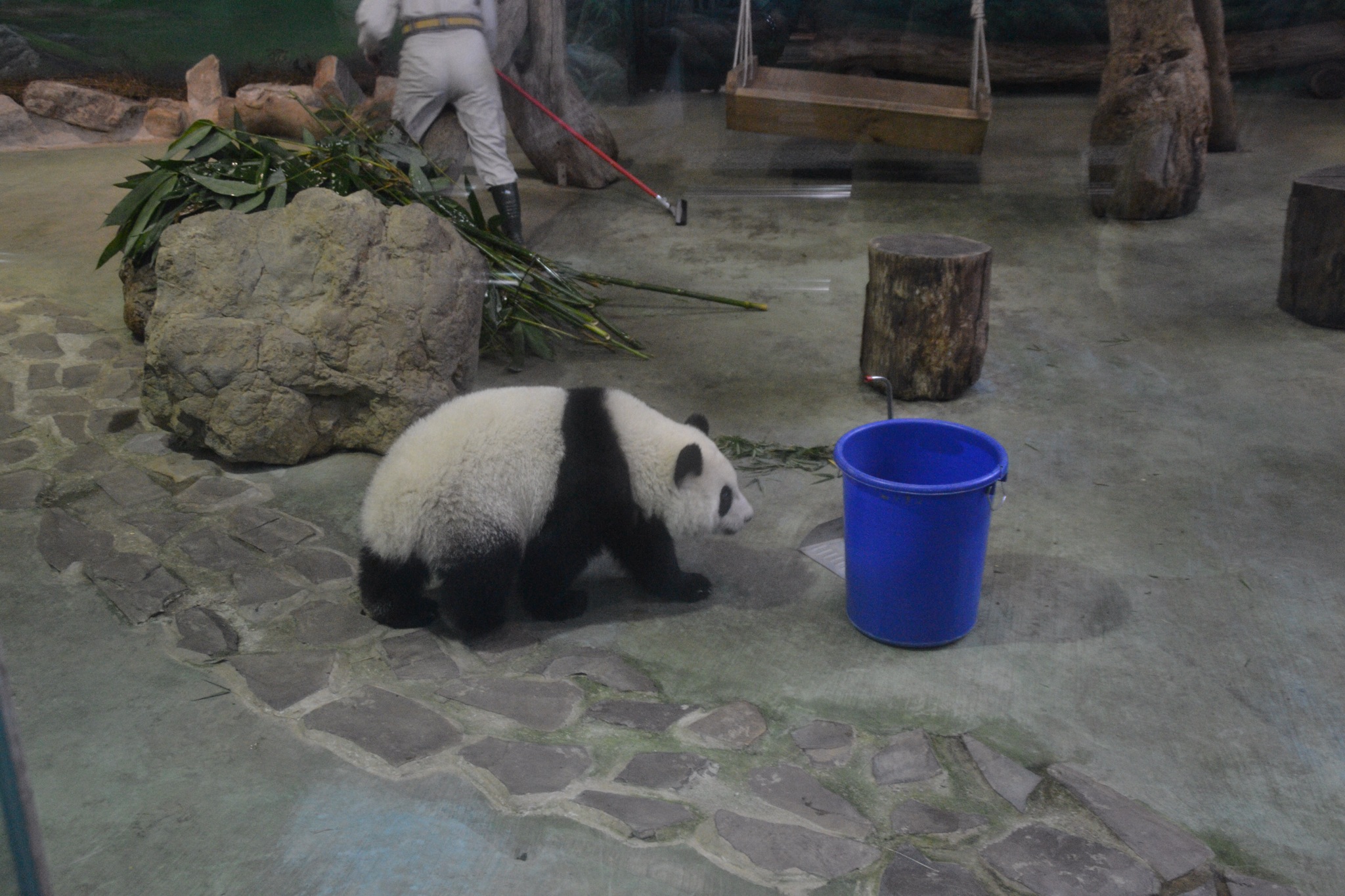 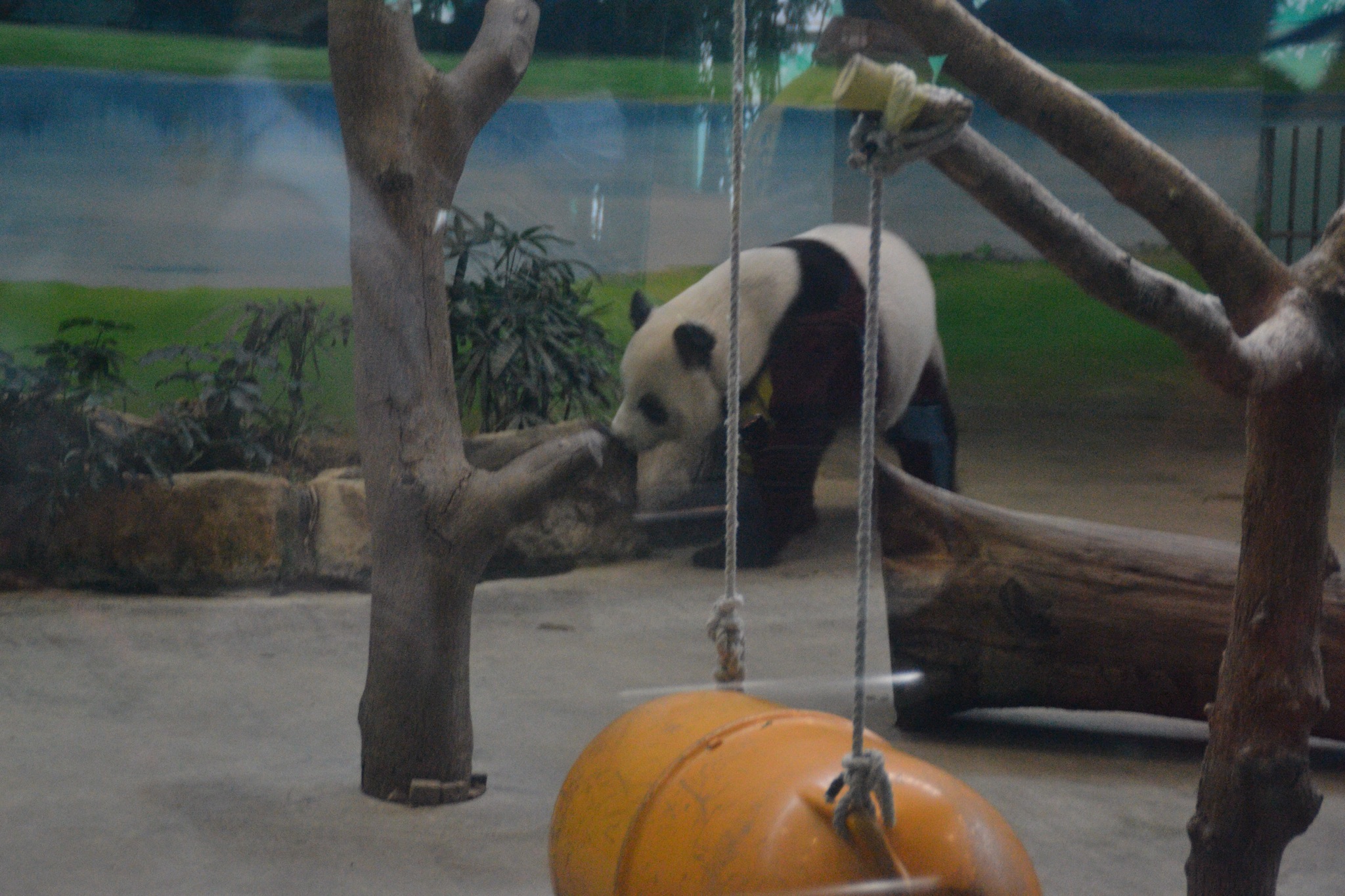 On our last evening, we went for a final wander around town and found a couple more cool bars for some final cocktails. 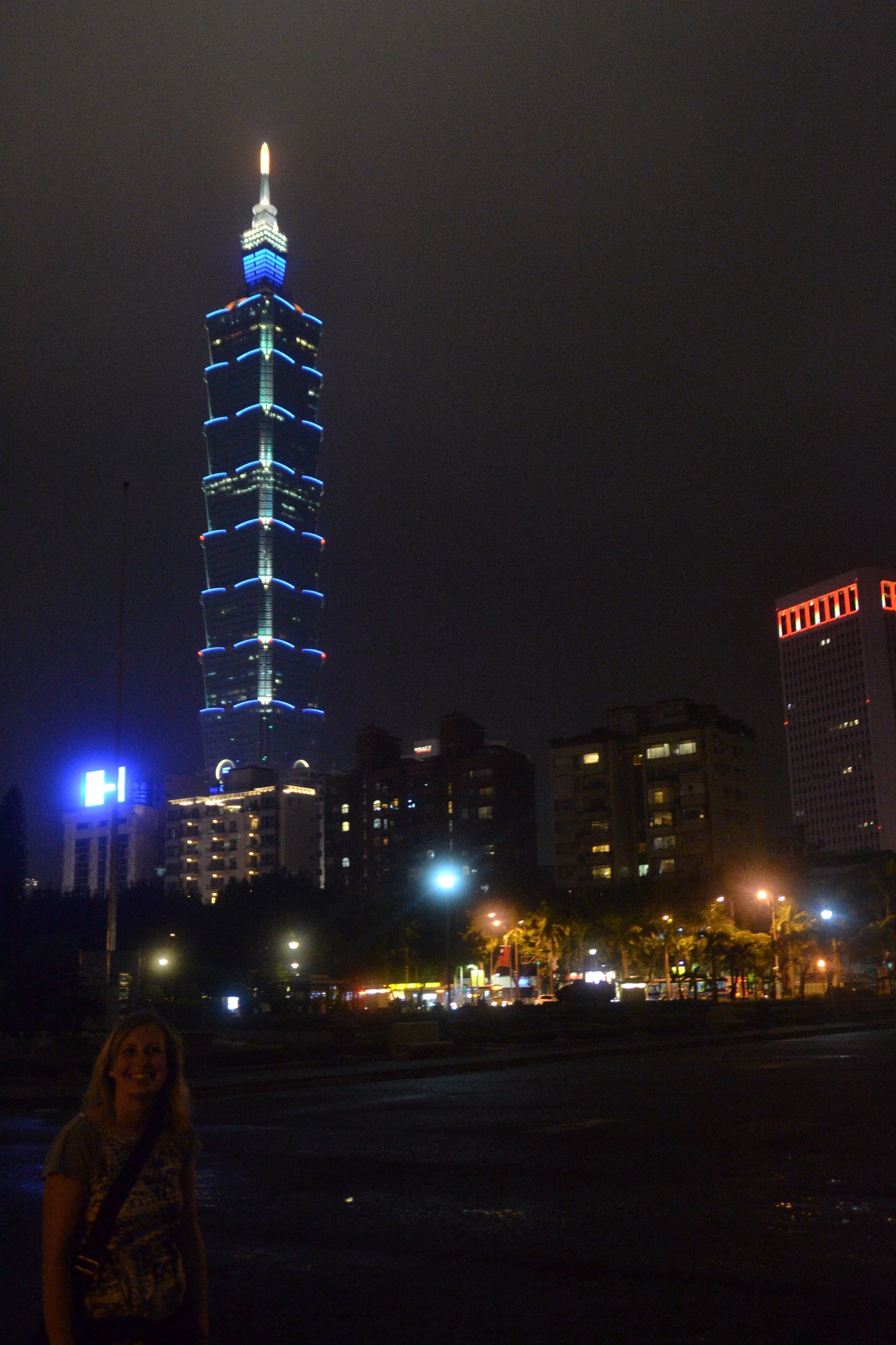 Taipei was a really interesting city to visit. It doesn’t get too many western visitors so the level of English was not very high, but we managed to get by. Aside from the level of English, we found it a difficult city due to its size. Everything seemed very spread out so we tried to research where to eat and drink beforehand but there must also be a high turnover of places as about half the places we went out to look for had closed their doors! Probably this would be a great place to visit with a local who could take you straight to the best places.