There was a time when I never considered that I would ever visit Asia, let alone SE Asia. Since childhood, I’ve been allergic to all kinds of nuts, although I’ve only had serious reactions to peanuts. I’d always thought – Asia – lot’s of peanuts. There’s no way I can go. As most of the scare stories you read in the newspaper are about people having suffered deadly reactions after eating in Indian or Chinese restaurants, I won’t even order Asian food in London.

However, the more I saw pictures, heard other people’s tales and travelled to other countries, the more Asia called to me. When my Dad spent a couple of years working in South Korea, I knew that I’d be crazy to pass up the chance to visit him. It was a nice easy introduction to ‘adventurous’ travelling with my allergy. Aside from the fact that peanuts are not as predominant as they are in other Asian cuisines, he reassured me that there would be plenty of places I could eat. Just as we in the UK love to visit Asian restaurants, there are plenty of European restaurants in Asia and of course the ubiquitous chains – some people bemoan McDonalds popping up all over the world, for me it’s a godsend. We also made sure to have one of his friends write a note for me in Korean explaining my allergy that I could show in restaurants. I think I only ate one truely Korean meal while I was there, but the trip gave me the confidence to explore Asia more. 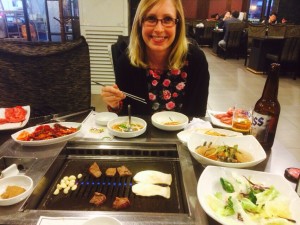 The following year on the way back from Australia, I spent a long weekend in Hong Kong. Of course here, there were plenty of safe food choices, I don’t remember too much about what I ate. I do remember that I had really loved my time there and realised that there must be more places I could safely explore. At the end of the day, there would always be something I could eat – pringles, pot noodles, fresh fruit. I wasn’t going to starve to death in a two week holiday and I was perfectly ok with not experiencing the local food. 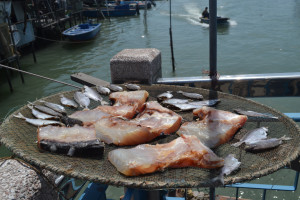 Fast forward a couple of years and we were faced with the opportunity to travel for six months between moving from Amsterdam to London. In the interim I’d spent lots of time researching the practicalities of visiting SE Asia with allergies and amongst the pessimists on forums saying it would be ridiculous to go, I found plenty of people who had been and had a great time. We planned our trip, taking in plenty of places where peanuts are the first thing that spring to mind when you think of their cuisine – Thailand, Vietnam, Malaysia, Indonesia.

I made sure I was prepared. I stocked up on epipens and ordered translation cards from Allergy UK in various languages. These were absolutely invaluable during our trip, well worth the money.

We planned for our first few days in Bangkok to be in a Self Catered apartment while we adapted to life in Asia.  In the end we cooked one breakfast there and that was it! I’ll be honest, I ate a lot of Subways during those days and indeed during the trip, but it didn’t matter, I was in Thailand!! We never went very far from the well trodden backpacker trail, but that meant we were never far from some food I trusted. Vietnam and Cambodia had the least chain restaurants out of all the places, but I still always managed to find something. In China, we were staying in well know hotel chains where a lot of the staff spoke English and understood my needs – I’m sure lots of tourists have the same problem. There I was able to sample more traditional Chinese food. In Thailand, my quest for safe food took me to an English pub in a Tudor style building on Koh Phangan where I enjoyed a Cottage Pie – definitely an experience, even if it wasn’t traditional Thai food! On a lot of the islands, it was very easy to get freshly BBQ’d fish – plain, simple and you can see it being prepared in front of you. One big concern had been that peanut oil would be used a lot, but as it’s expensive, I found that most places were using soybean or palm oil. 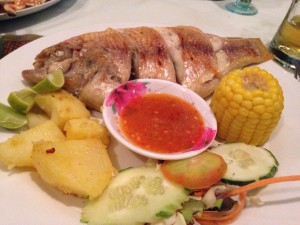 The one place where I was really able to get stuck into the food was Japan – nuts are rarely used in the food there. I think I made up for all the food I’d missed out on elsewhere during our 4 weeks in Japan. As one of my favourite countries, I’d recommend it to anyone in a flash, but it is especially suitable for anyone who is allergic to nuts and wants a food based holiday in Asia. When we spent a weekend in Seoul, I was much more adventurous than I had been on my first trip to South Korea, I ate Korean BBQ and bibimbap with no problems. 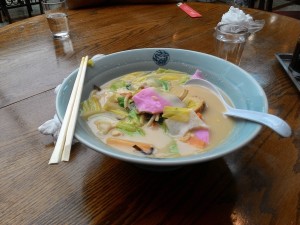 I’m so glad that I was able to overcome my ‘fear’ of Asia, I had such a great time in all of the countries. I hope that this post helps those in a similar position to decide if they would be comfortable taking such a trip. 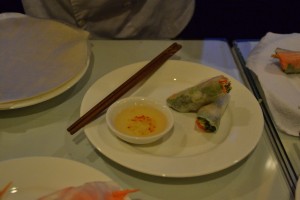 Here’s a summary of the most important things I learnt about how to travel safely with an allergy. A lot is common sense, but following all these steps helps me feel a lot more confident and relaxed on a trip.