We stayed in the Myeongdong area, right in the centre in the fairly new Hotel Shin Shin. It was a bit of a ‘hipster’ hotel, the staff were wearing bow ties and cardigans and the restaurant advertised craft beers. The location was perfect and the staff were super helpful. Being right in the centre came in handy as on realising the temperature was much colder than Japan – lows of around zero, shopping for a pair of gloves and some running trousers were pretty high on my agenda – I wasn’t running in 0 degrees wearing little shorts!

Warm clothes purchased, we got into the local spirit by enjoying a Korean barbecue. We picked the some steak and rib meat to cook at the table and it came served with lots of little side dishes, mostly involving hot sauce of varying spiciness – very different to what we’ve been enjoying in Japan the last few weeks. We weren’t big fans of the side dishes, but the meat was good! 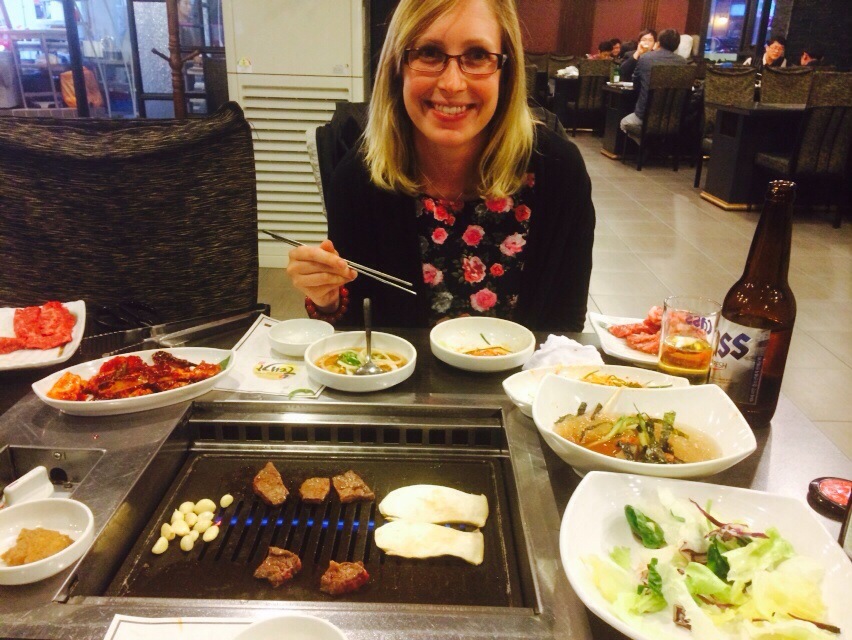 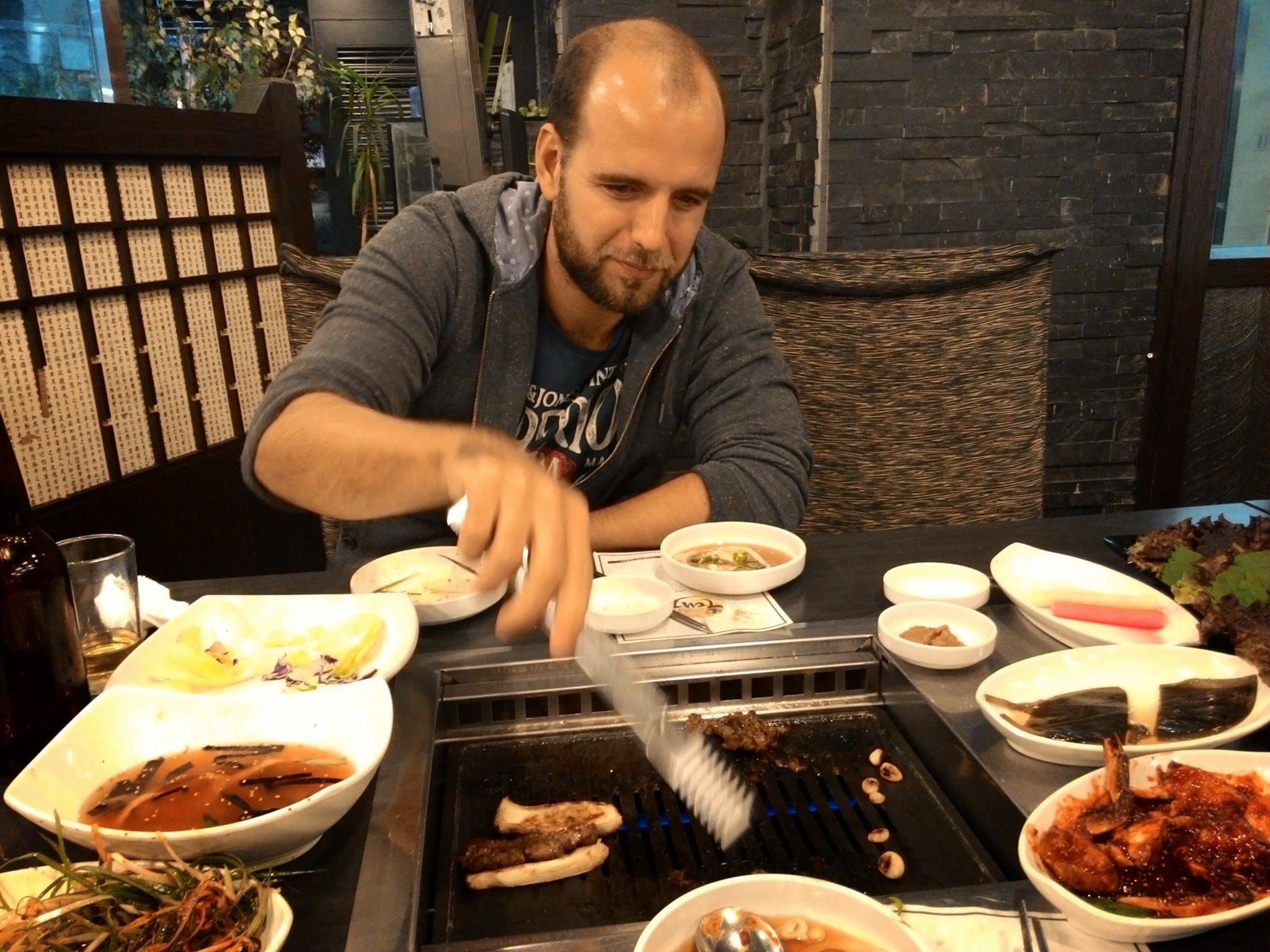 On the Saturday, we took the cable car to the peak in Namsan Park for a view over the city. As with the cities we’ve visited in Japan, Seoul is sprawling, with the surrounding mountains limiting it somewhat and making for a much more interesting view of the city. We walked down on the way back, and found Namsan park is pretty well setup for sports with a soft road surface for runners and exercise stations at various points up the hill. 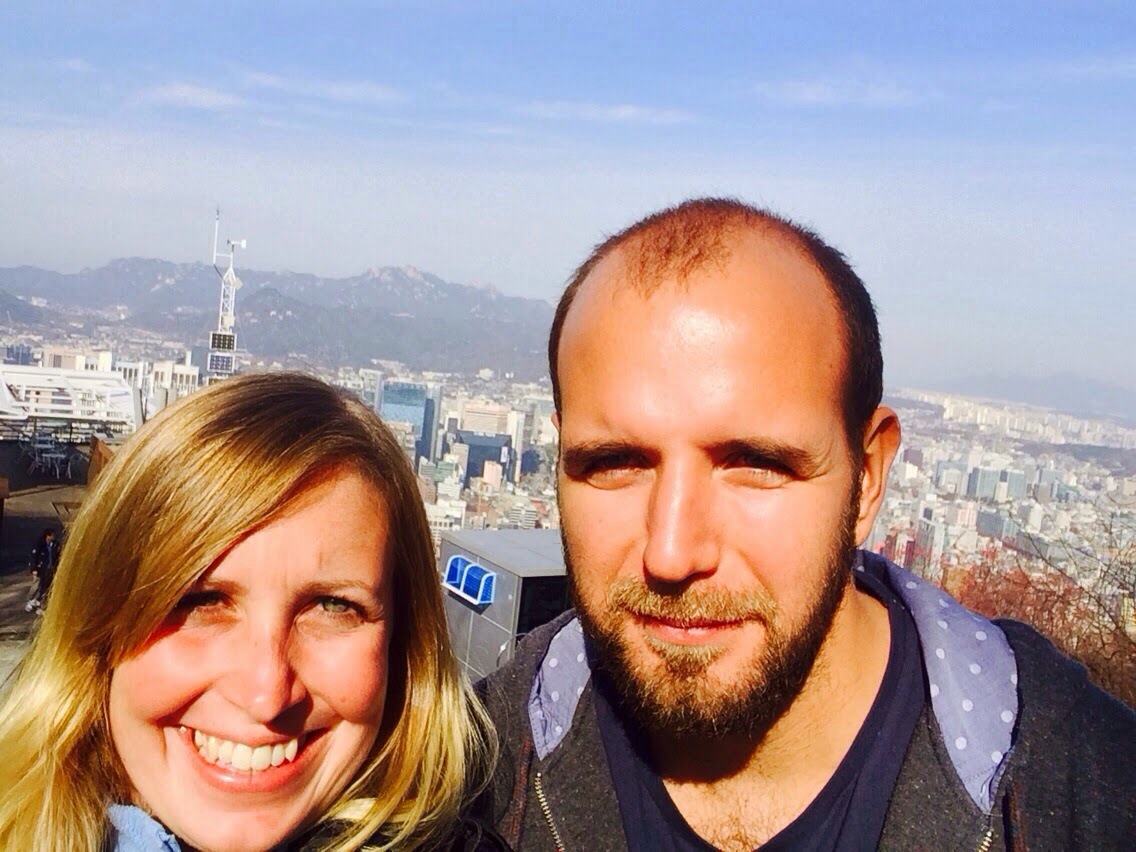 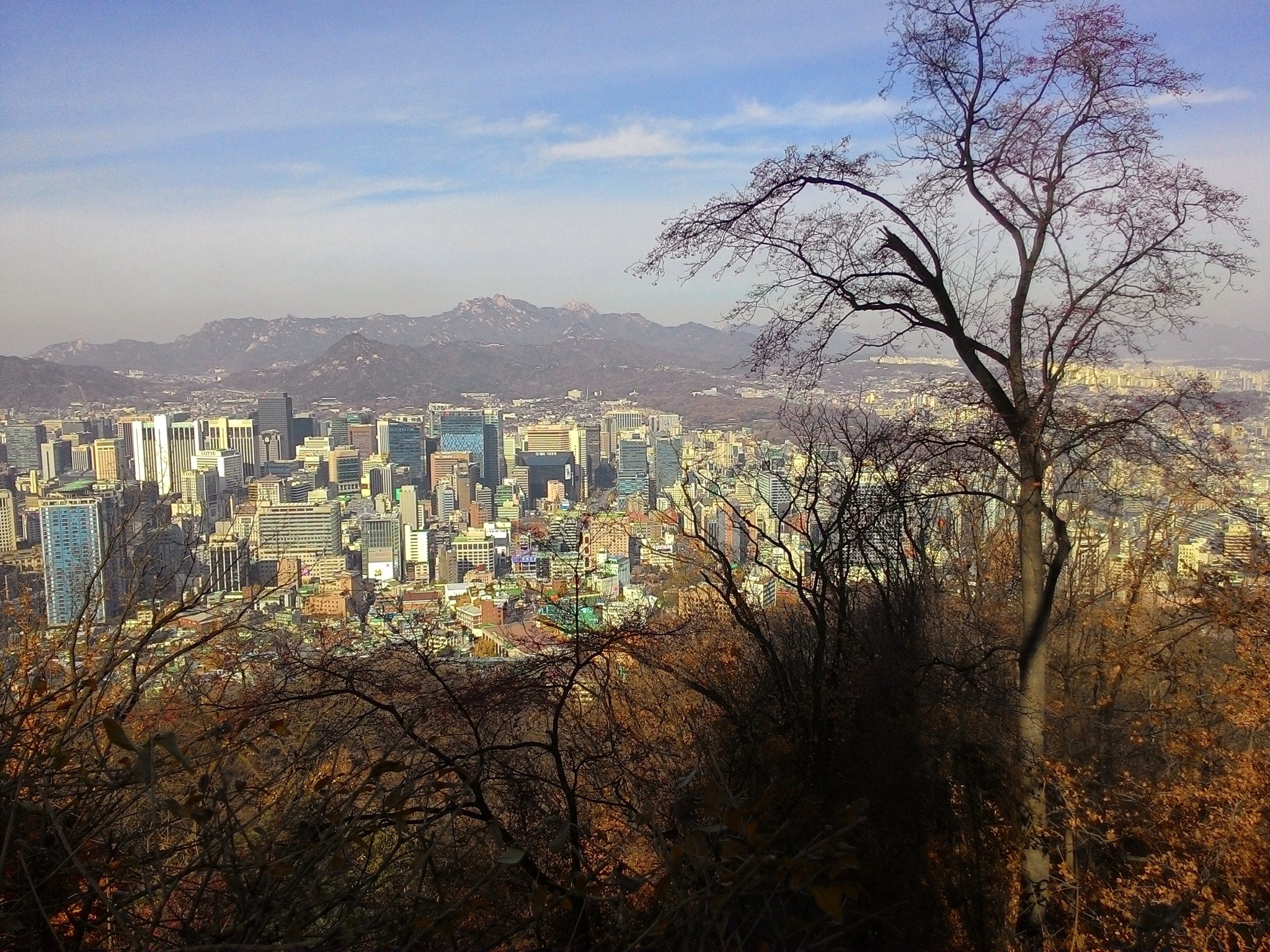 Once we were at the bottom, and after a hot drink, we took a wander around Namdaemun market. There were lots of interesting food stalls and the usual selection of designer knock offs and it was mega busy on a Saturday afternoon.

In the evening, we went over to Itaewon, one of the nightlife districts and the most international due to it being near the US army base. We started with dinner, I had bibimbap – rice, veggies and raw egg served in a hot stone dish so when you mix it all together it ends up as fried rice, and again this came with a similar array of side dishes to the previous nights meal. We then hit a couple of bars, including a Sherlock Holmes themed one which was showing the latest BBC series on the TV.

For brunch on Sunday morning, we decided to sample another Korean ‘speciality’. We’d seen lots of fried chicken restaurants in Seoul so it’s obviously very popular. We headed to KFC to sample something only available in Korea, the Double Down King, a burger in between two chicken burgers instead of bread. Our curiosity was satisfied but it’s not something we’d order again in a hurry! 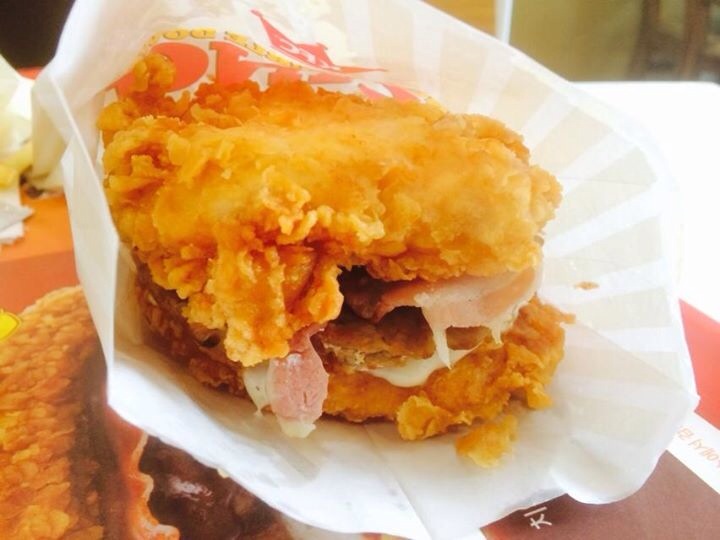 We then headed to the former palace of Deoksu-gung. The buildings here are a fusion of Western and Korean architecture. As with most of the Asian palaces we’ve been to, there’s not much to see inside the buildings, instead the attraction is more the outside of the buildings and the grounds they’re set in. 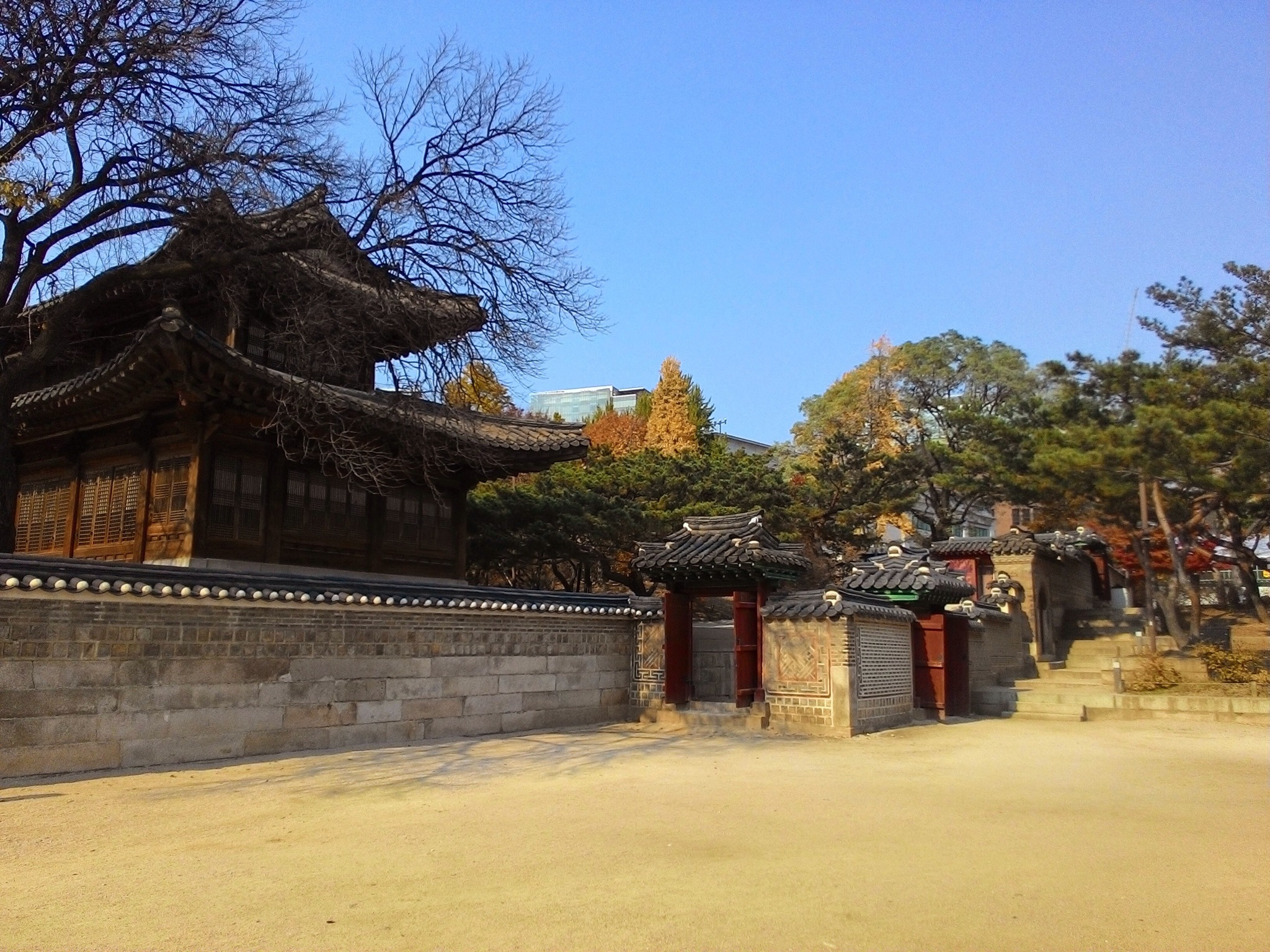 We finished looking around the palace about half an hour before the changing of the guard ceremony which we planned to watch. To kill time, we crossed the road to where there was clearly some kind of festival taking place as. It turned out to be the Seoul kimchi making and sharing festival which involved hundreds of people standing at tables on rubber sheeting making kimchi and other people taking jars of it home. It was a pretty crazy sight and is obviously a big deal as we saw a news crew reporting on it. 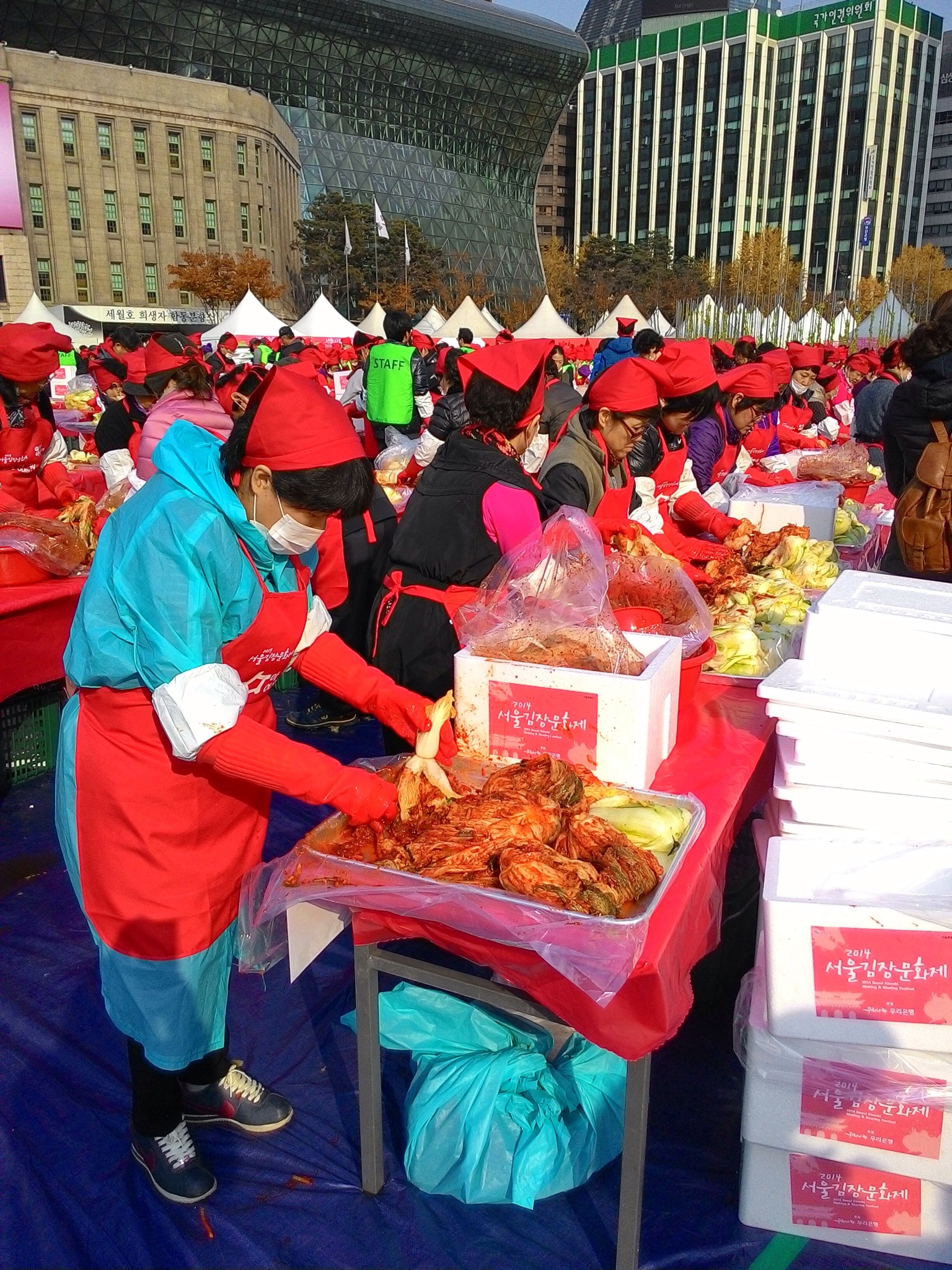 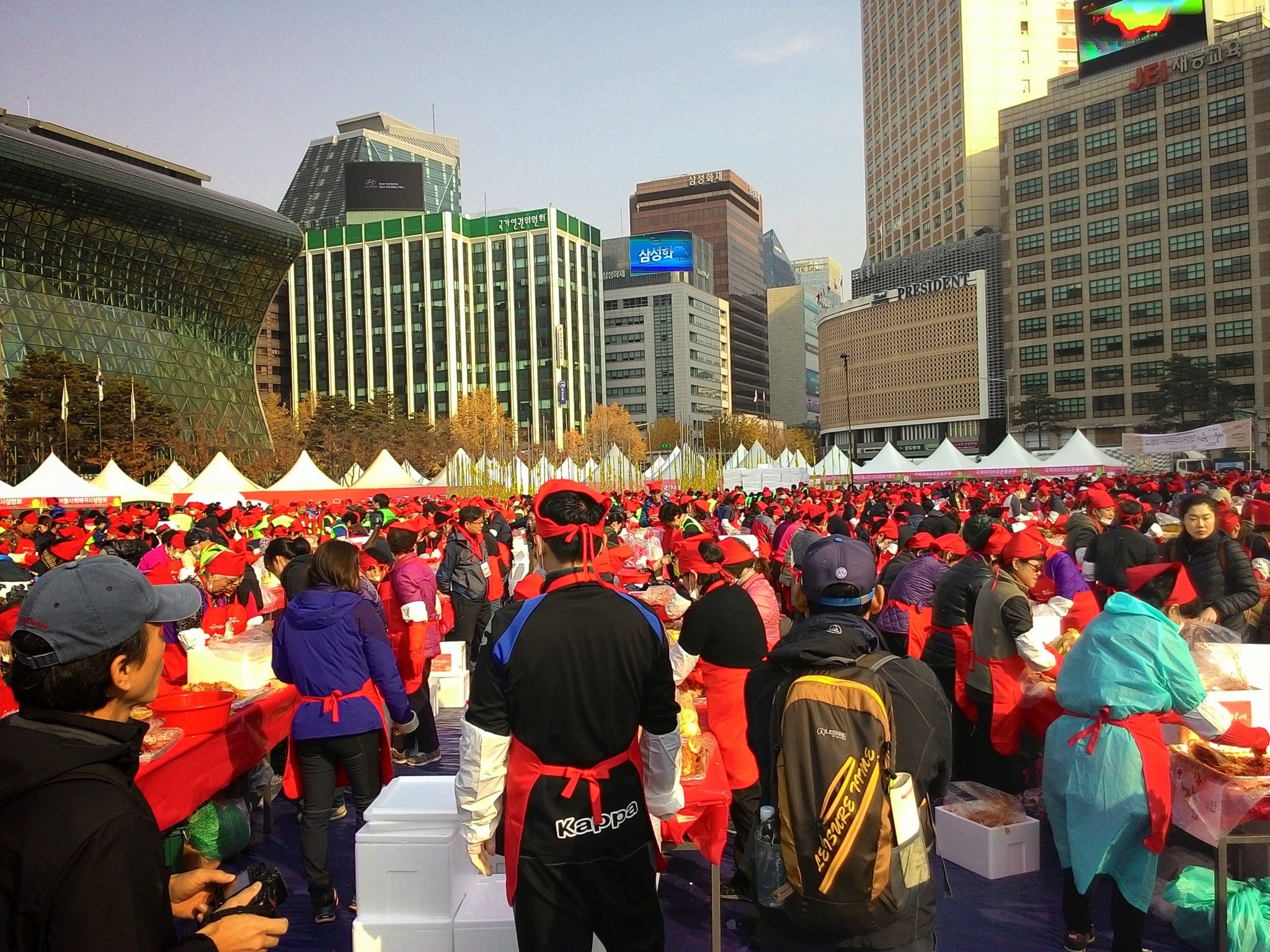 The changing of the guard ceremony at Deoksu-gung is something I’d seen on my previous trip, but it’s a pretty good show and as we were in the area, it seemed a good idea to see it again with Dean. My favourite part is that the band has people playing sea shells! 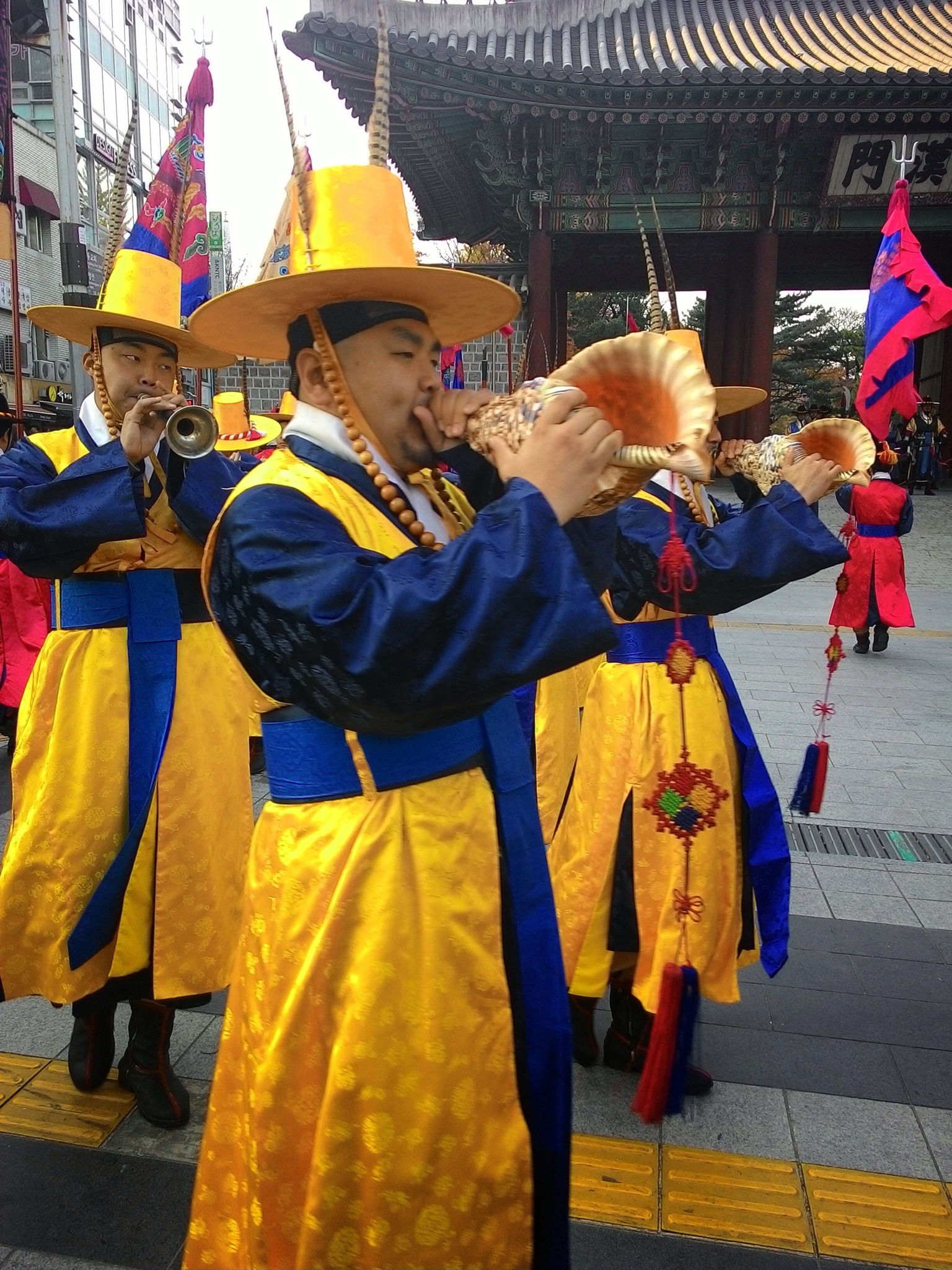 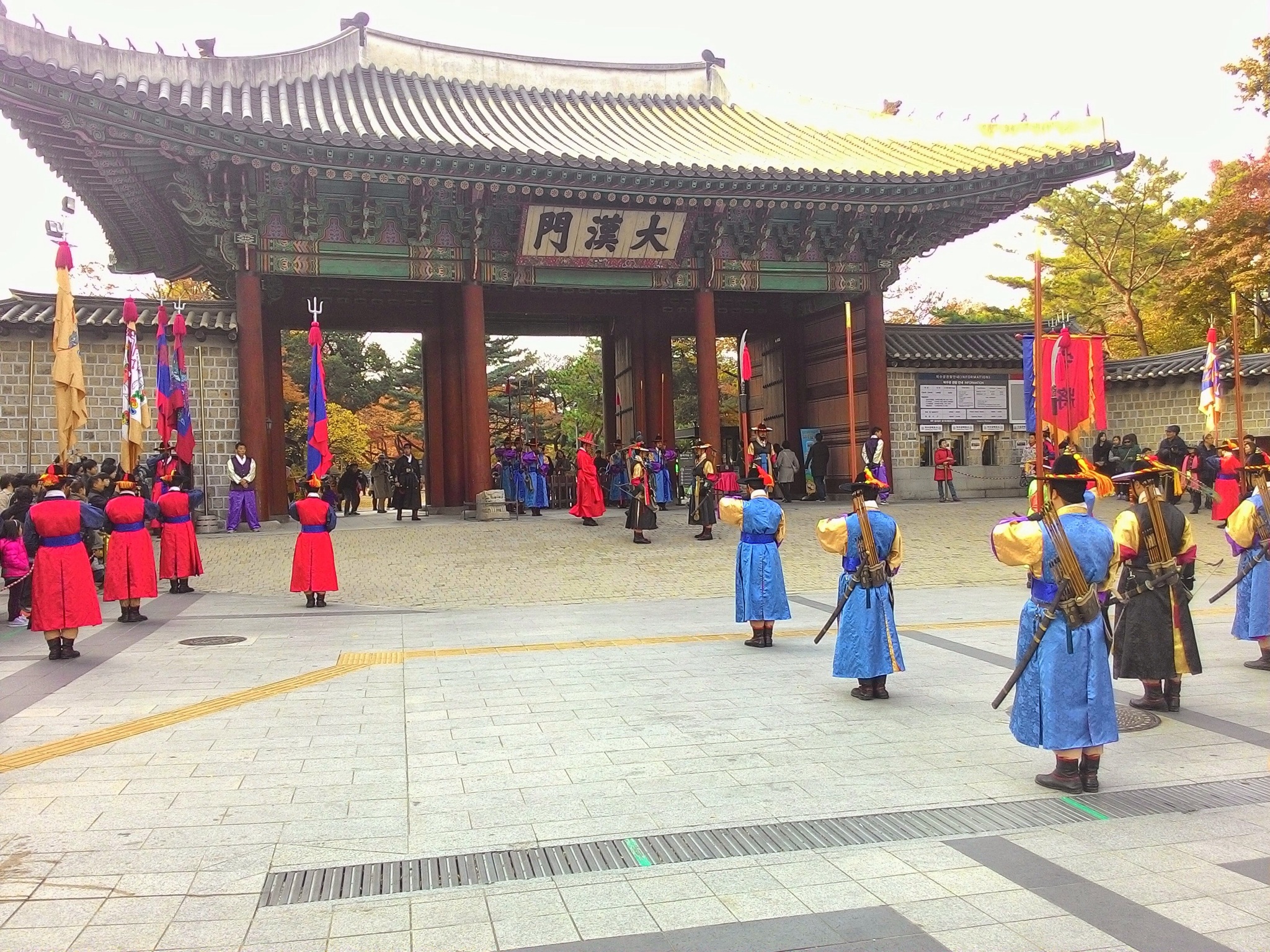 In the evening, we visited the Seoul lantern festival which we only know about as I’d run past in daylight hours the previous day. It takes place along a stream running through the city and was very popular, there’s about 1km of lanterns on the stream and the paths either side are pretty narrow. The lanterns were amazing, I’m really glad I happened across it the previous day! 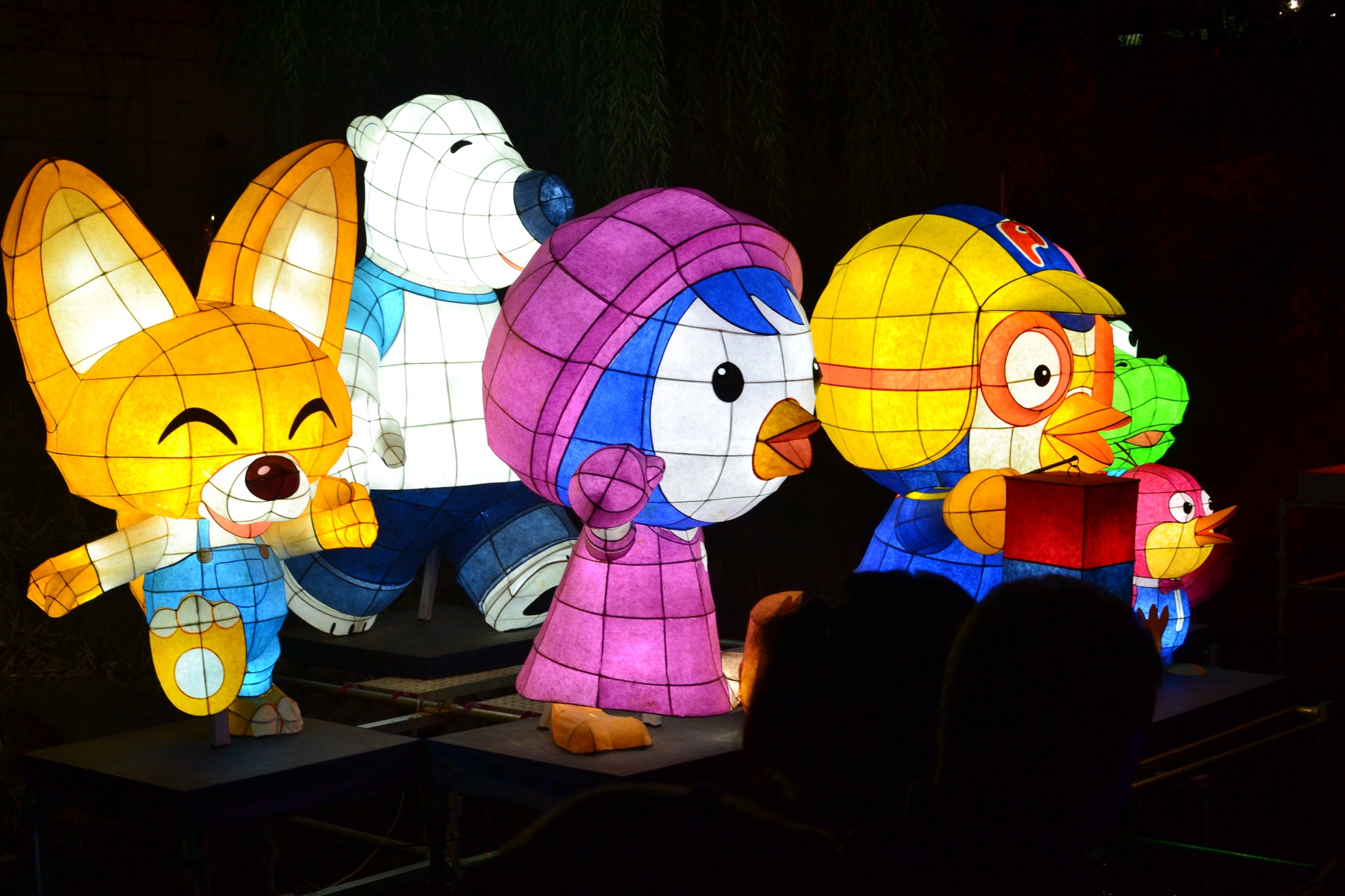 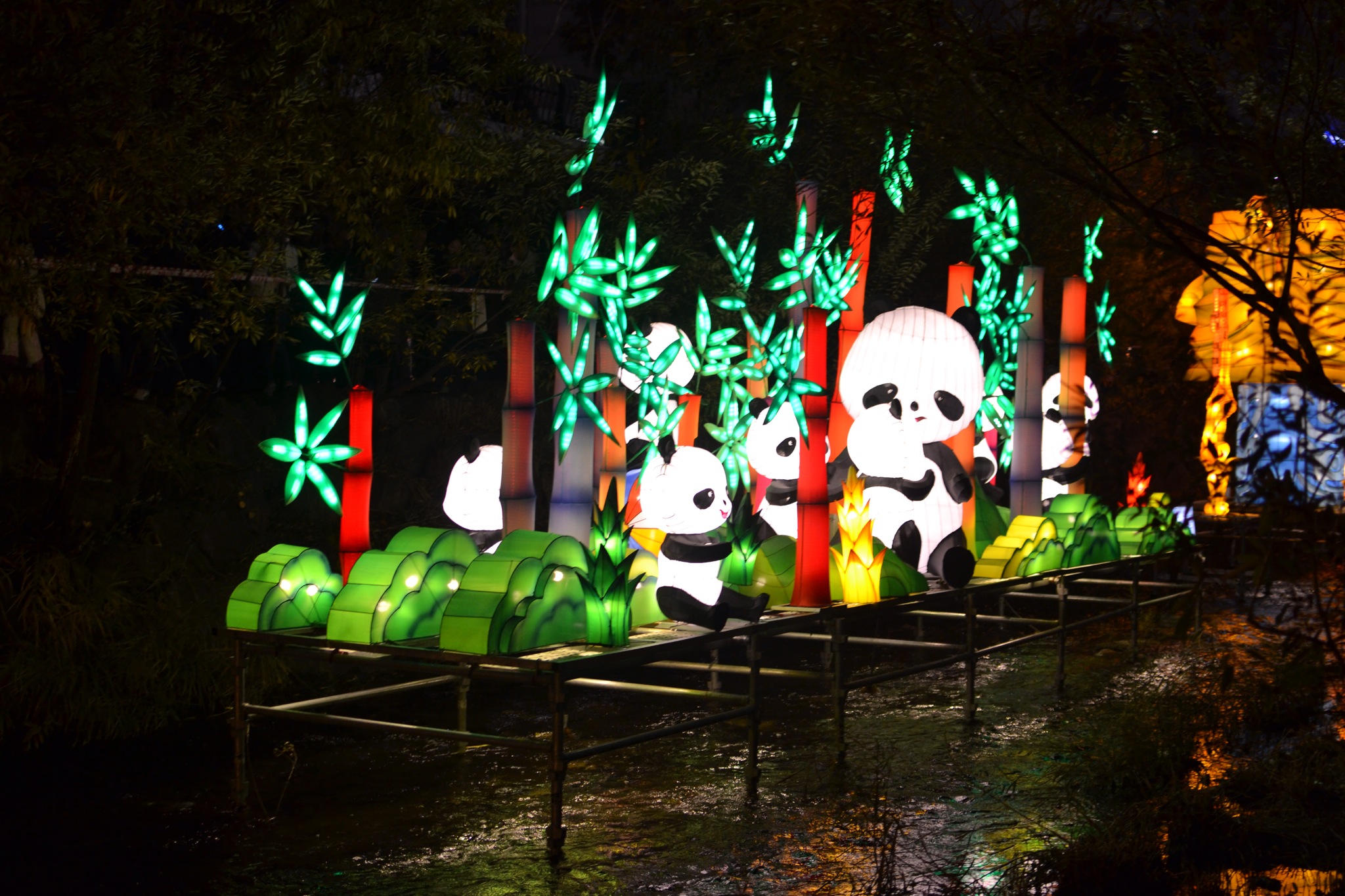 All in all we were glad we made the trip to Seoul, it’s a lively city with lots happening. Although we weren’t massive fans of the food, it was interesting how different it seemed to that of its neighbours. There were definitely parts of being in Korea which seemed like China – crazy driving and parts like Japan – the landscape, the bowing and the feeling of being in a safe city (apart from the drivers).