Sanur and the Gili Islands

After the relatively cool temperatures of Australia, it was back to the heat of Bali. First of all we stayed for two nights in the town of Sanur as our flight landed late and this beach town is easily accessible from the airport.

We only had one day here, but that was plenty to enjoy a long walk along the beachfront. We also met up with Mike and Katy again as we were all travelling together to our next stop of the Gili islands. 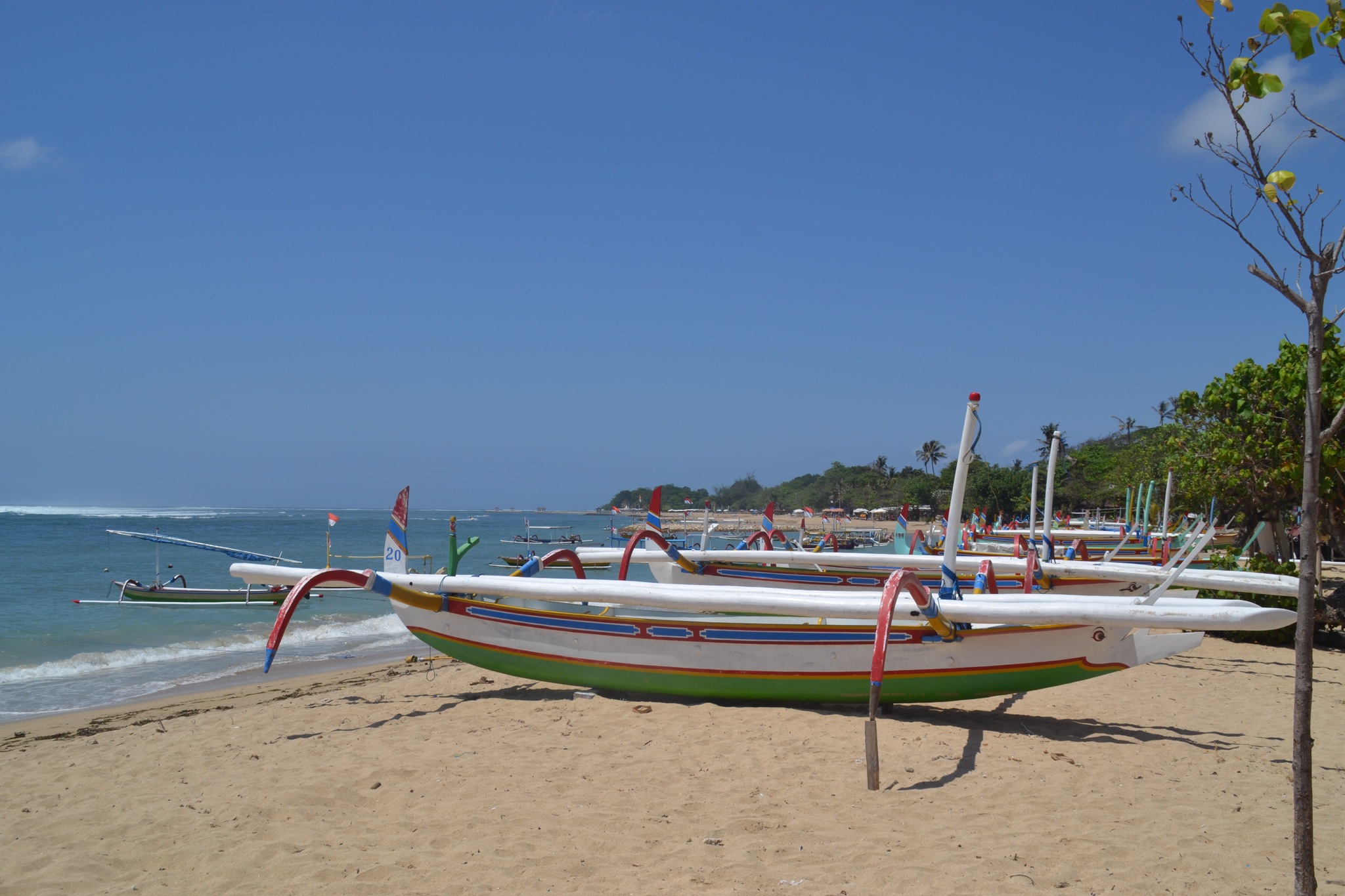 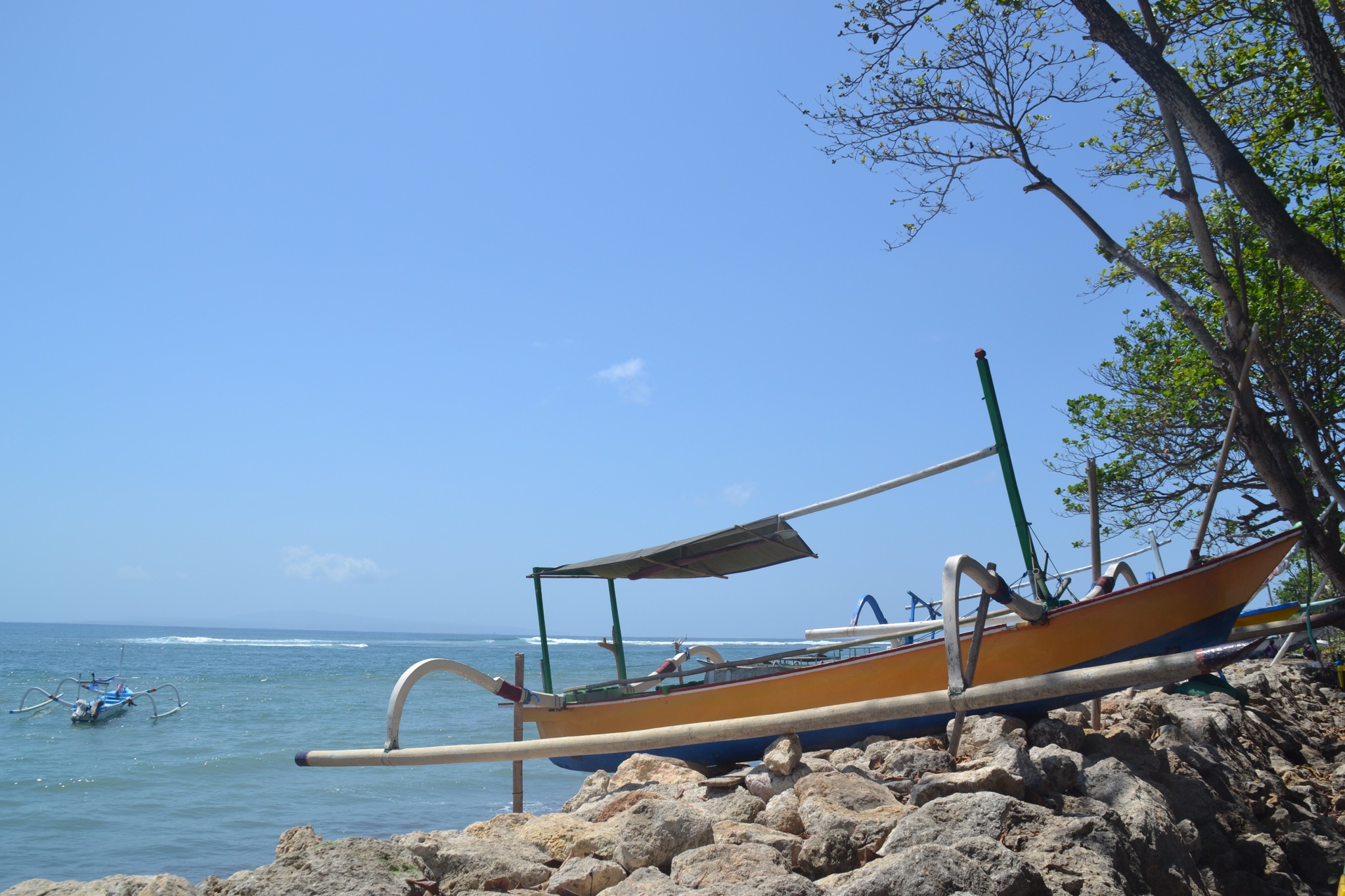 The Gili islands are three coral fringed islands to the north east of Bali, close to the neighbouring island of Lombok. There are no cars on the islands, horse and cart or bicycle are the preferred modes of transport. The crossing took two hours by fast ferry. We opted to sit on the roof to enjoy the views although towards the end of the journey, it proved to be a rather wet choice as waves came splashing over the top of the boat. 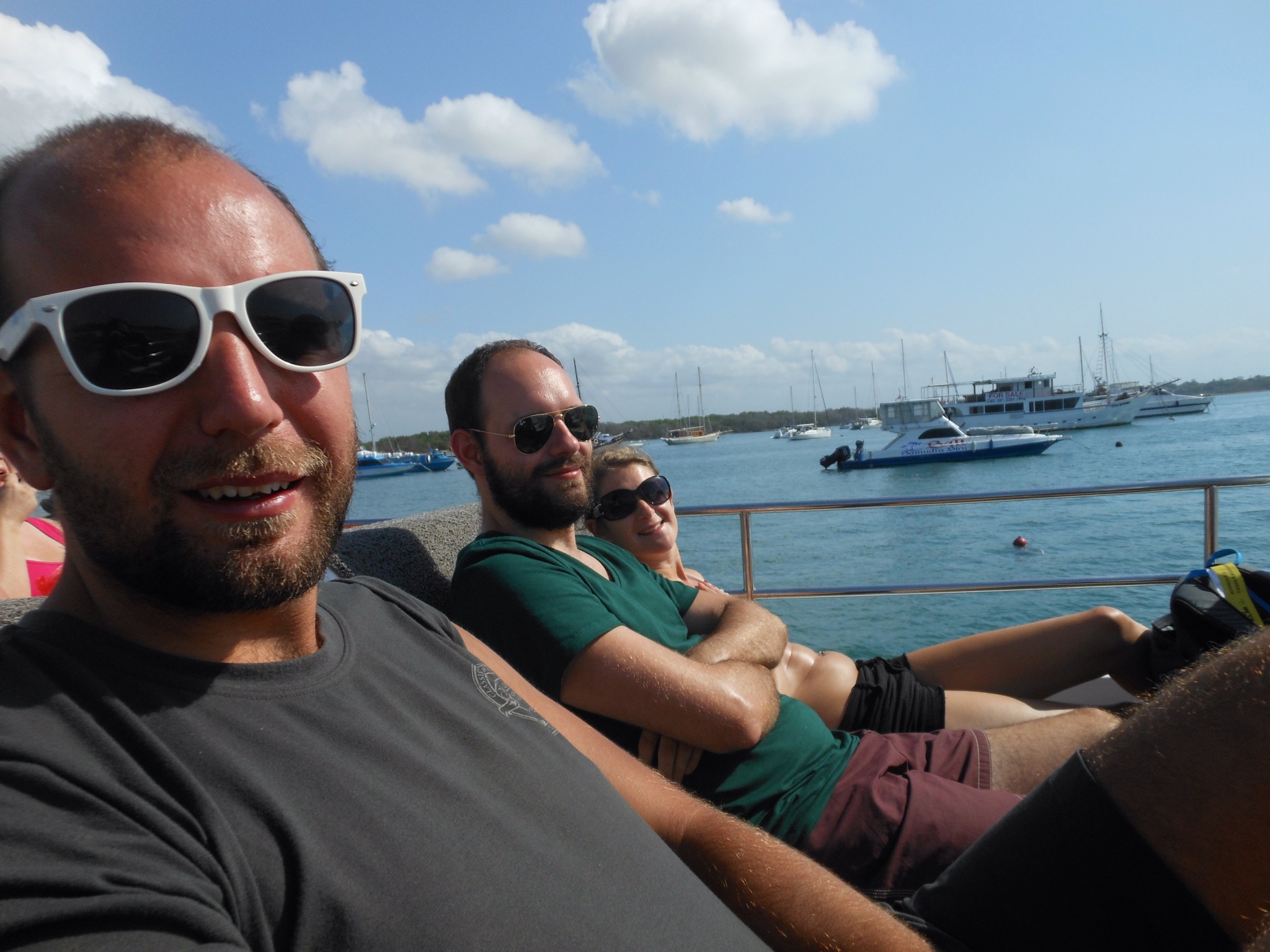 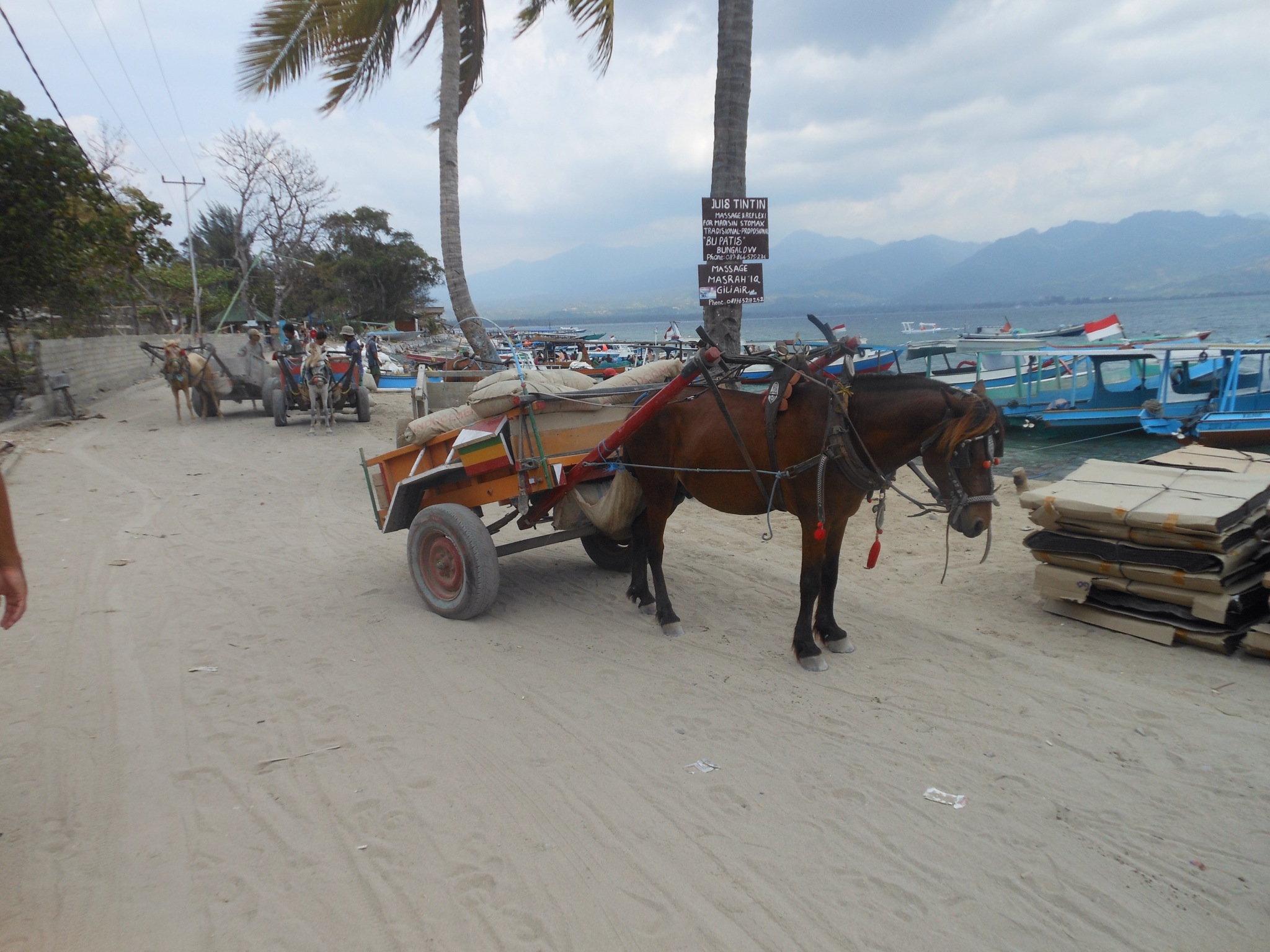 We stayed on Gili Trawangan, the most developed of the islands with a good range of accommodation and plenty of bars and restaurants. Like we’d done on Koh Samui, we split the cost of a two bed villa with our own private pool which worked out pretty good value. 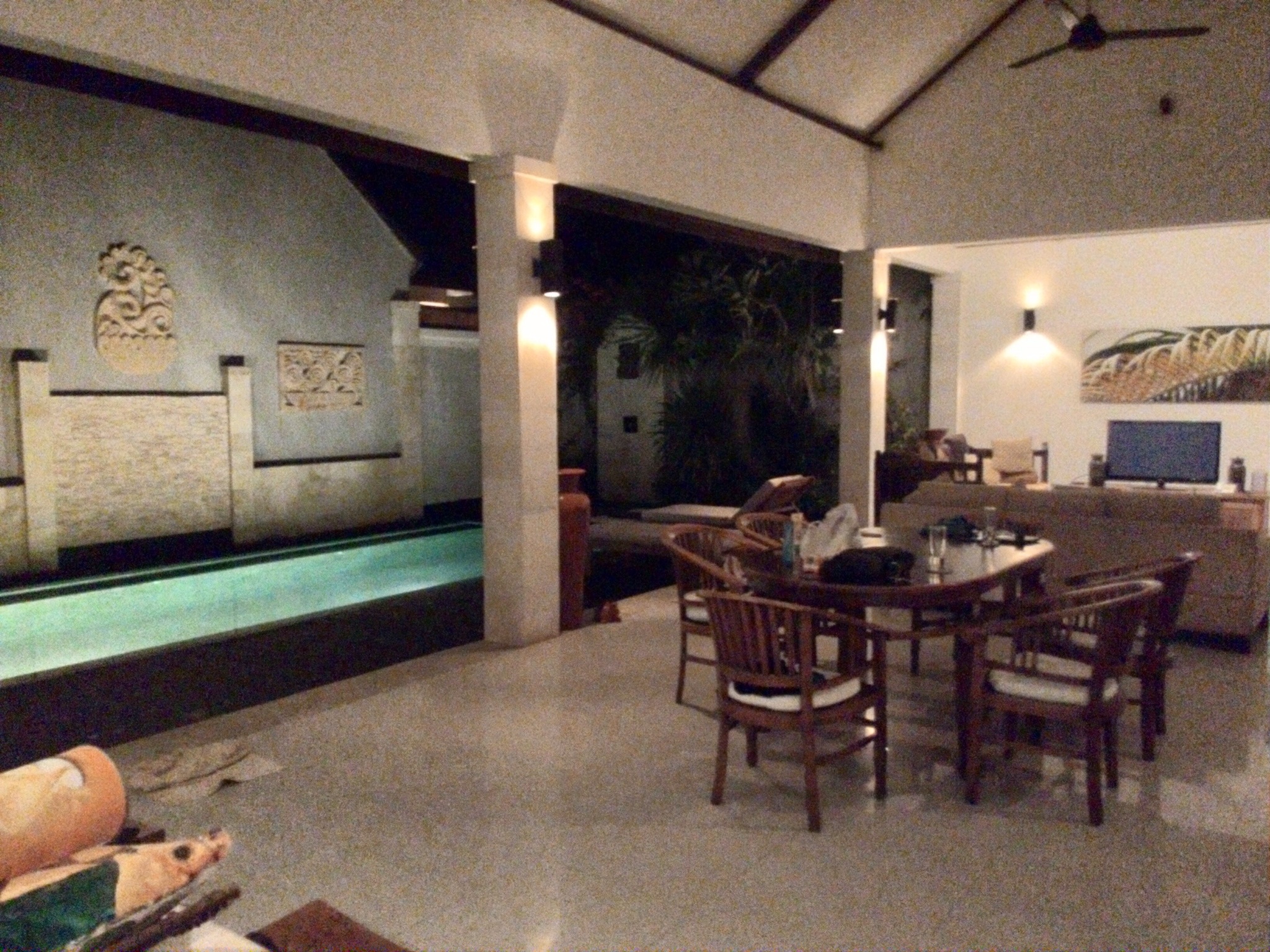 On our first day, we hired bikes from the hotel and cycled to the north east of the Island where the best snorkelling can be found. There are pretty strong currents around the gilis which made it tricky to stick together so I drifted down the beach on my own and spotted 4 turtles. Trying to stay in one place to watch them was pretty tiring as it required swimming against the current. 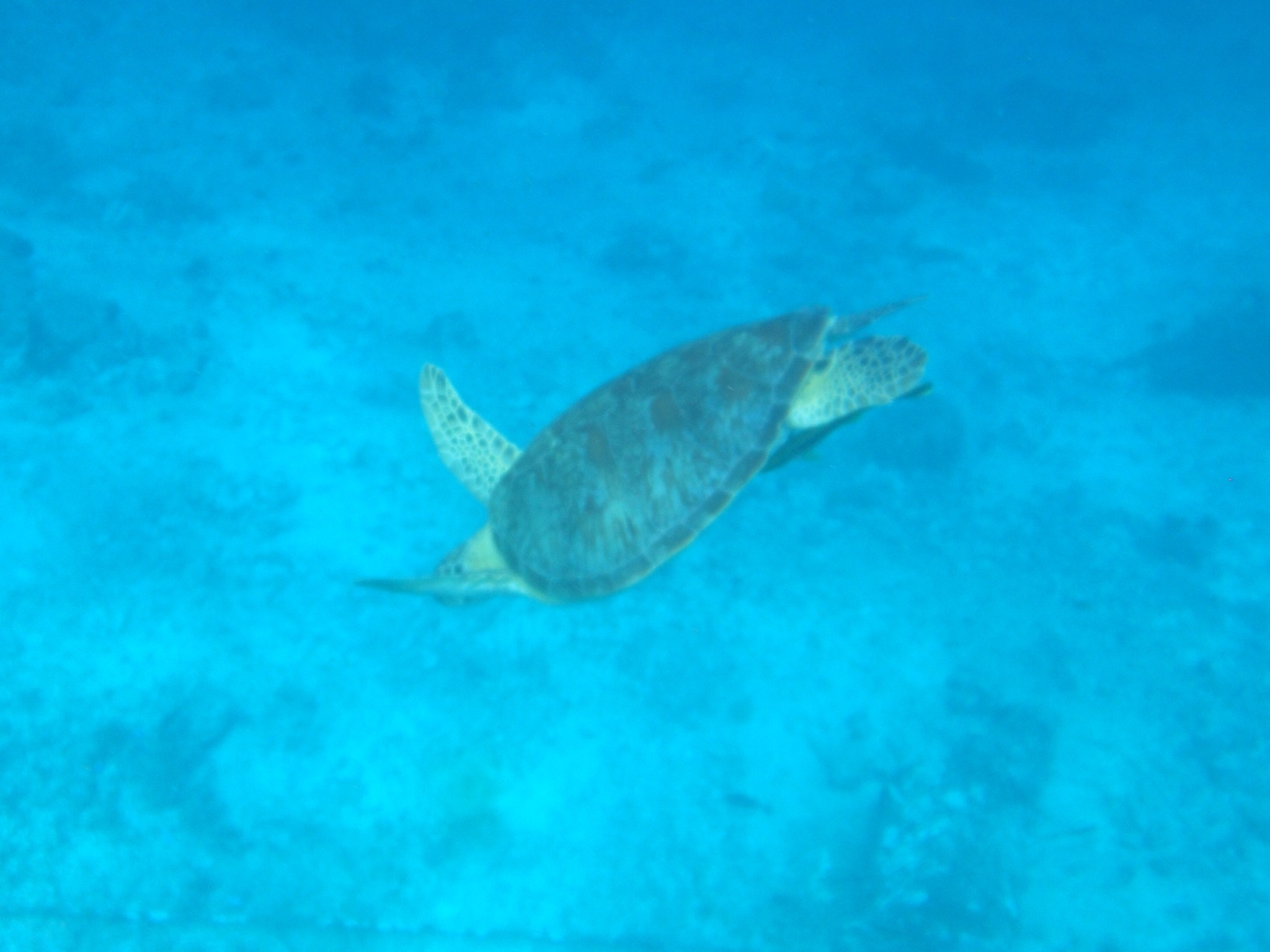 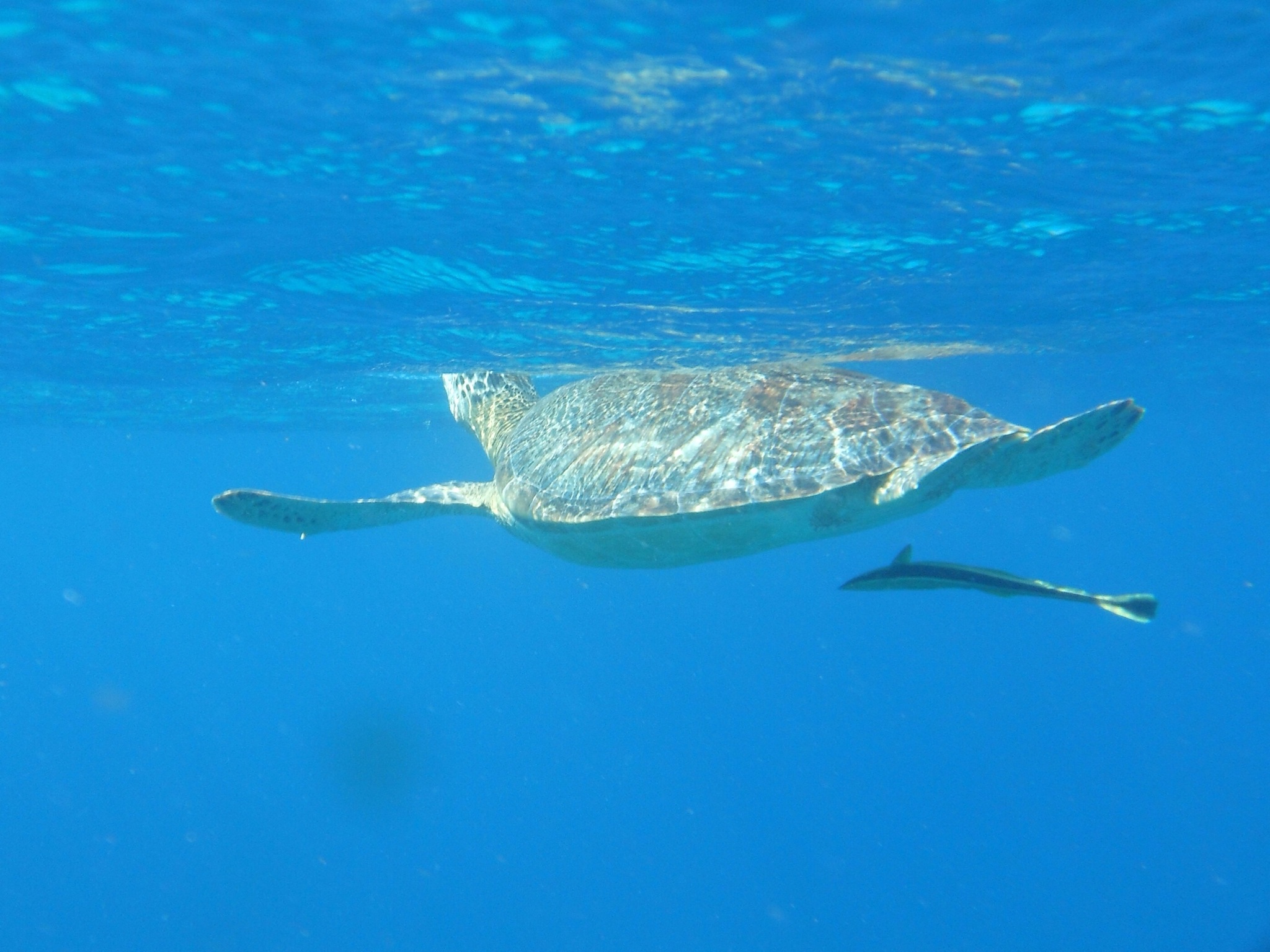 We then hopped back on our bikes to cycle round the rest of the island. We arrived on the west side just in time to watch the spectacular sunset over Bali accompanied by a G & T. For dinner we went to one of the many BBQs on the island where you pick your fish (or lobster in Mike’s case) and then help yourself from the large salad buffet – yummy. 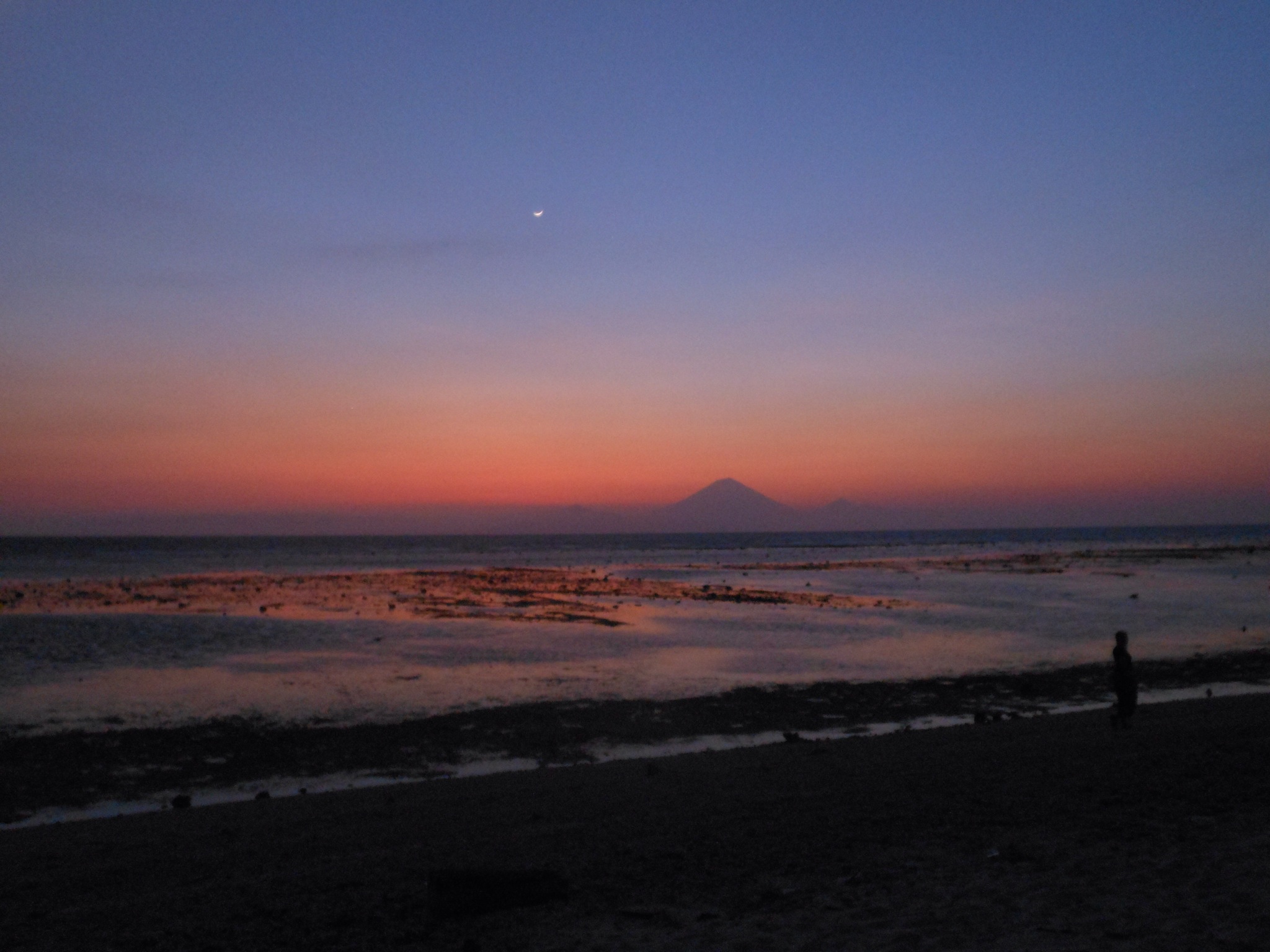 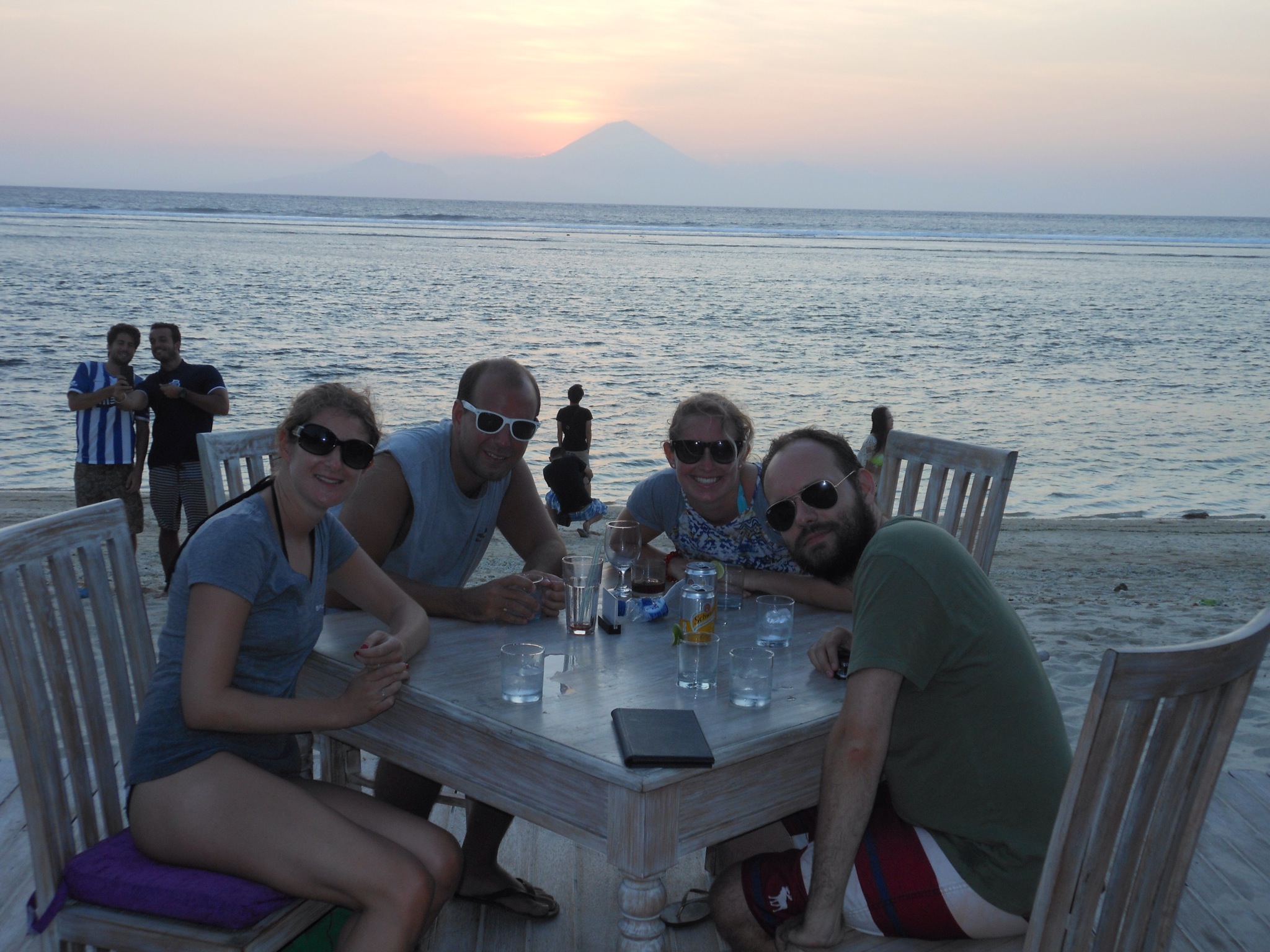 Gili T is known for being a party island. We didn’t find it too crazy, nothing like Koh Phangan, although the boys did take part in a speed drinking contest in one of the bars. The time to beat was 15s. Dean came closest with 20s but decided against repeating it to improve his time.

On the last day we took a boat across to one of the other islands, Gili Air. We did some more snorkelling and this time saw lots of coral and a variety of fish. On the way back, we’d missed the last ferry and ended up being taken back in a rickety fishing boat. There were a few very hairy seconds as we rocked in some large waves, but the captain didn’t seem too fussed so we just held on tight and trusted it would be fine! In the evening we went to the beach cinema to watch Wolf of Wall Street. We’d all seen it before but still enjoyed it and it was a nice chilled end to our Gili adventure. 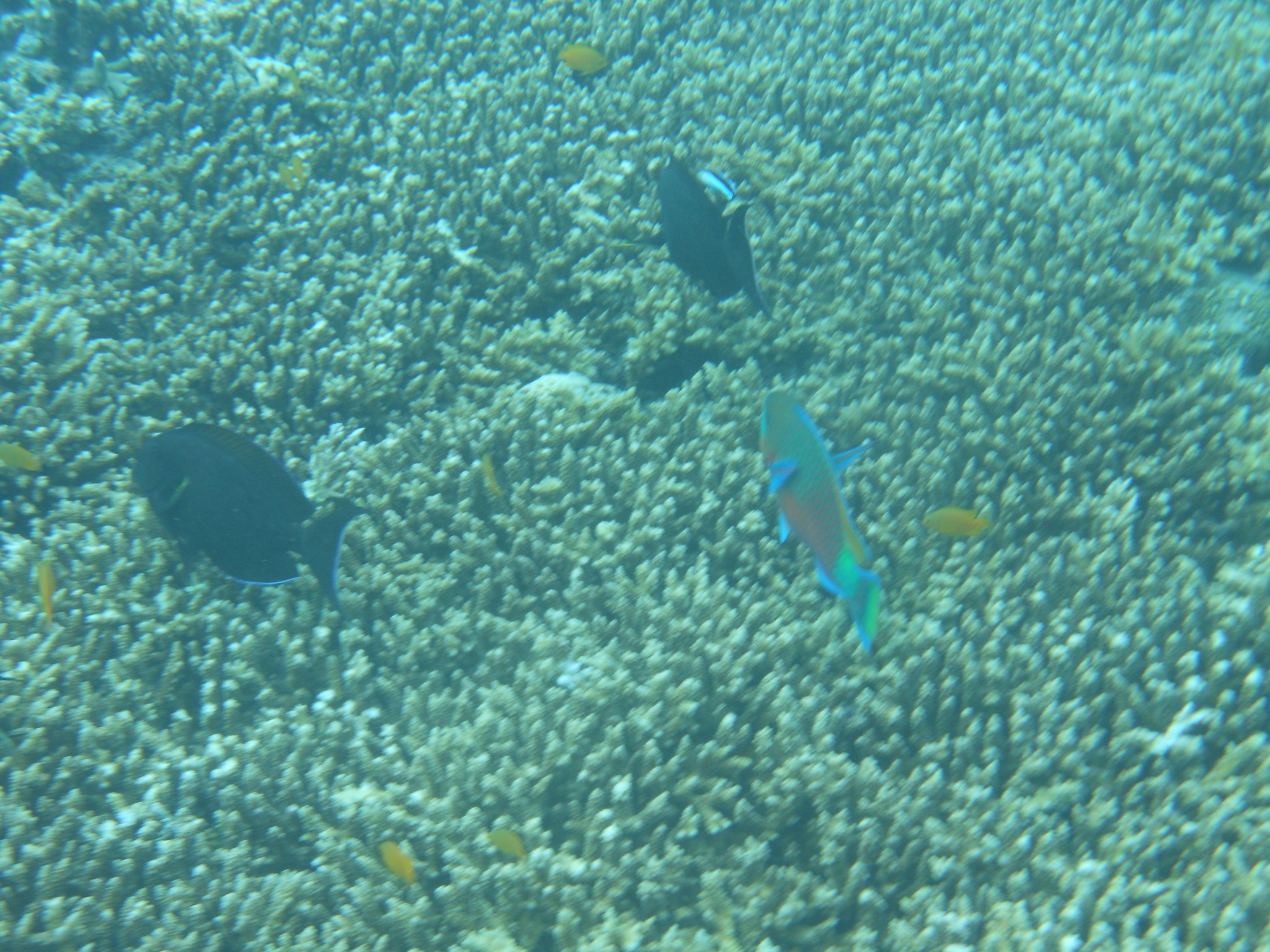 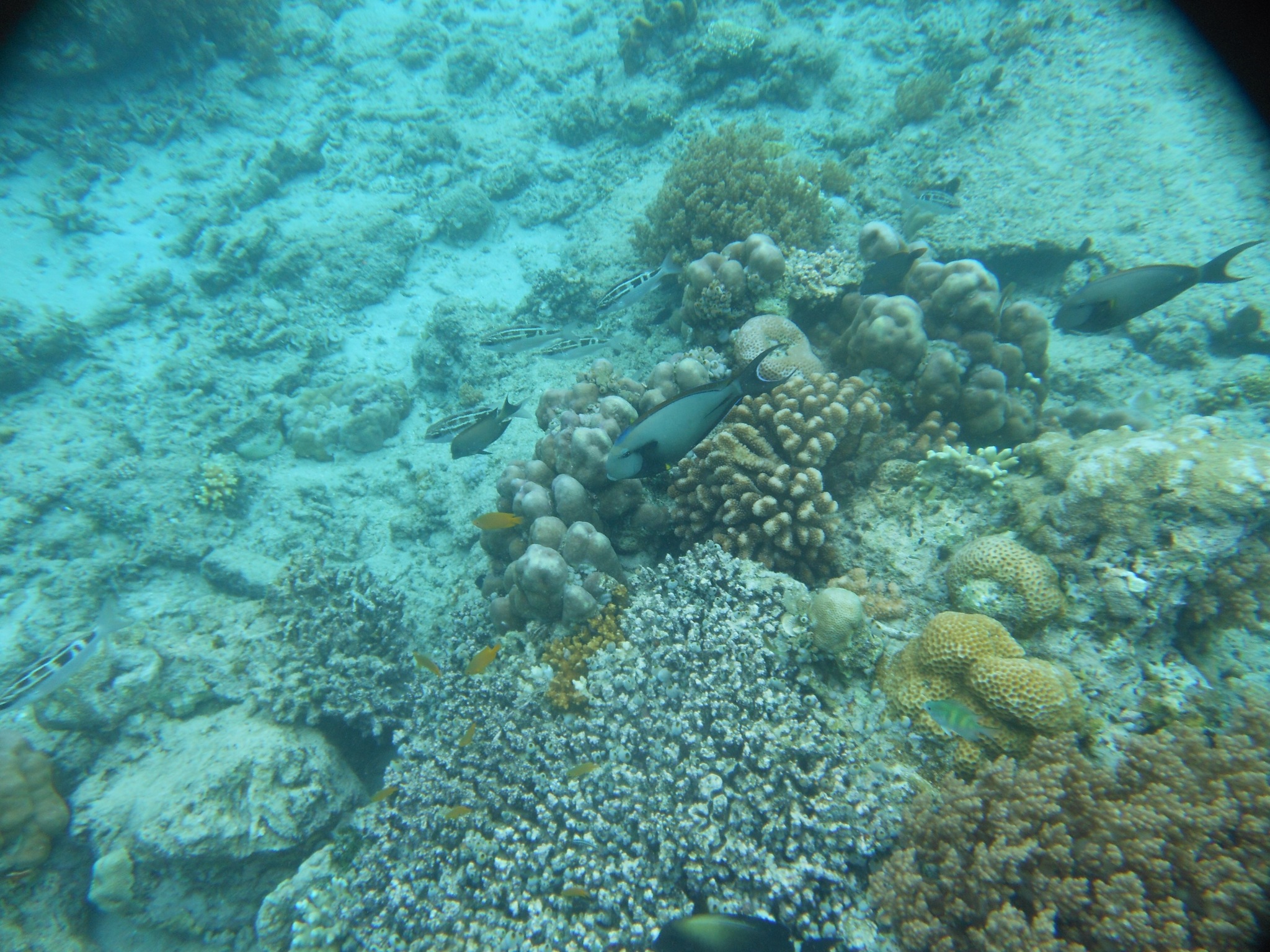