Road tripping from Melbourne to Sydney

Our first stop was only a couple of hours outside of Melbourne. Phillip Island is a small island connected by a bridge to the mainland. The place names seemed to have an Isle of Wight theme to them – we were staying in Cowes.

In the afternoon, we drove to Philip Island nature park. First of all, we went down to take a look at the Nobbies – some off shore rocks which are home to seals. No sign of the seals, but the scenery was stunning, even though it was mega windy. 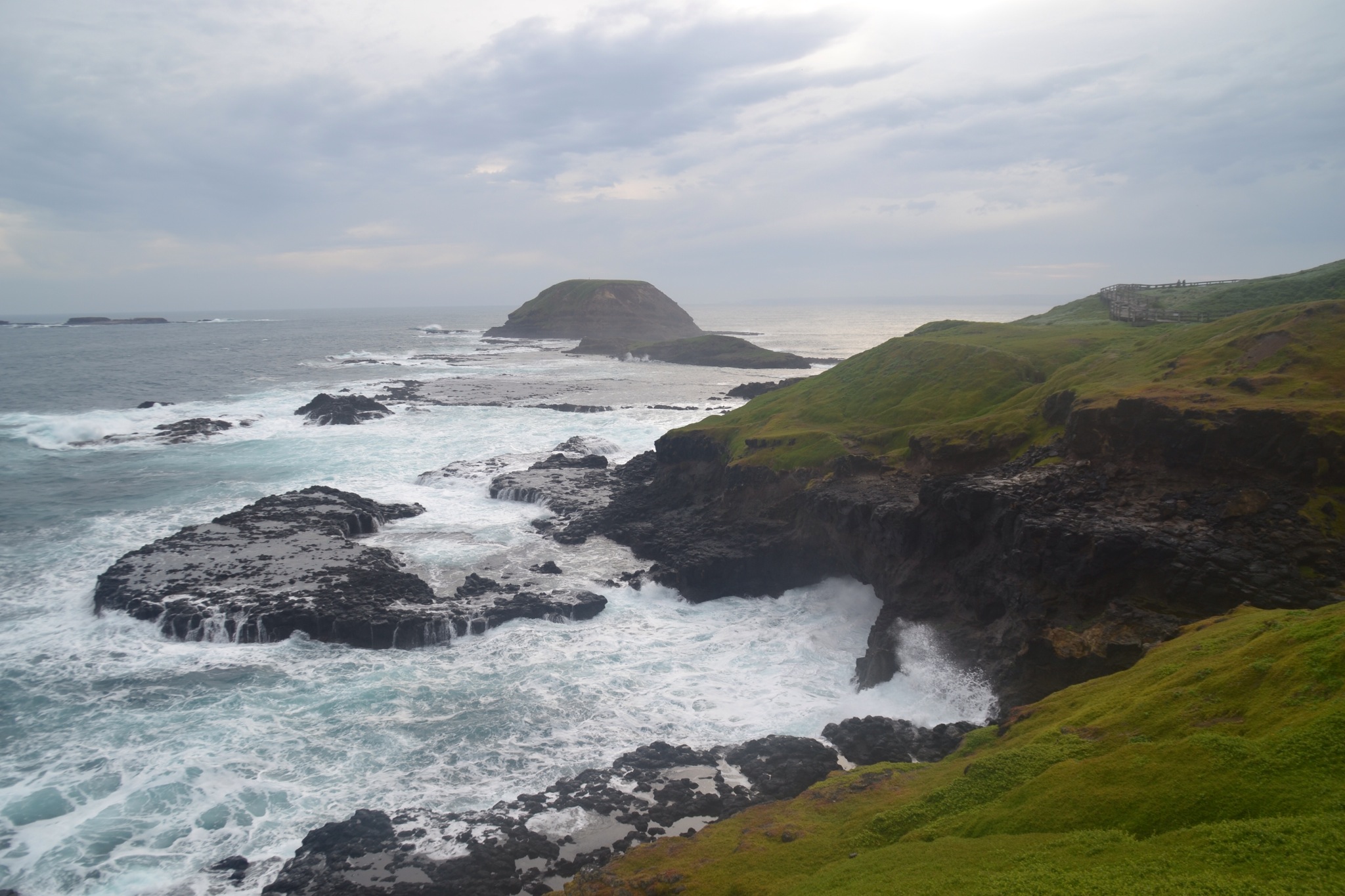 We then warmed up with a hot chocolate before purchasing our tickets for the main attraction – PENGUINS! There is a large colony of little penguins on the island and a conservation / visitor centre has been opened around their nesting area. You pay $24 (cheapest option – there were packages up to $100) to visit the ‘penguin parade’ when they return to their nests at sunset, making a dash across the beach to avoid any birds of prey (Dean considered the fee penguin exploitation, but we were informed it all goes to penguin conservation). There is a boardwalk above the nesting area and tiered seating behind the beach. We grabbed another hot chocolate and took our seats and waited. After about 10 minutes, the first few arrived and then they kept coming in small groups. When they got out the water, they stood at the edge of the beach for a while to be sure it was safe. Occasionally a seagull would swoop down and spook them at which point they’d all jump back in the water before regrouping to try and make the dash again. After we’d seen them on the beach, we headed back to the boardwalks where we saw them heading back to their nests or just hanging out. They seemed to be pretty organised, it looked like they would send a couple of scouts on ahead who would signal to the rest that it was safe to move on. They were also a lot noisier than I expected! The boardwalk allowed us to get really close to them and they didn’t seemed too fussed by it all. We weren’t allowed to take any photos, so the pic below is from the website to illustrate how cute they are! 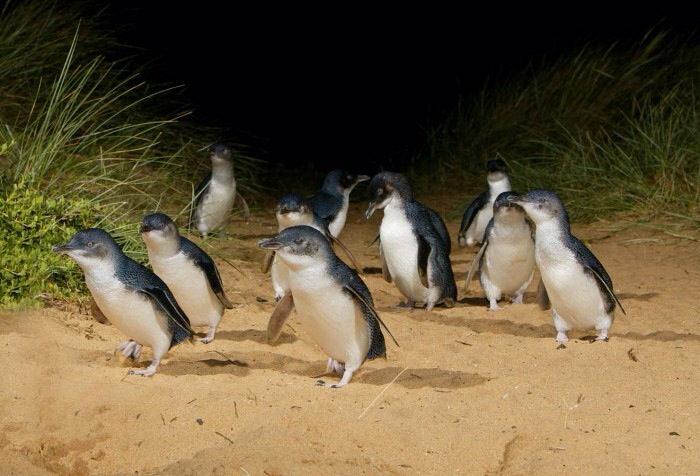 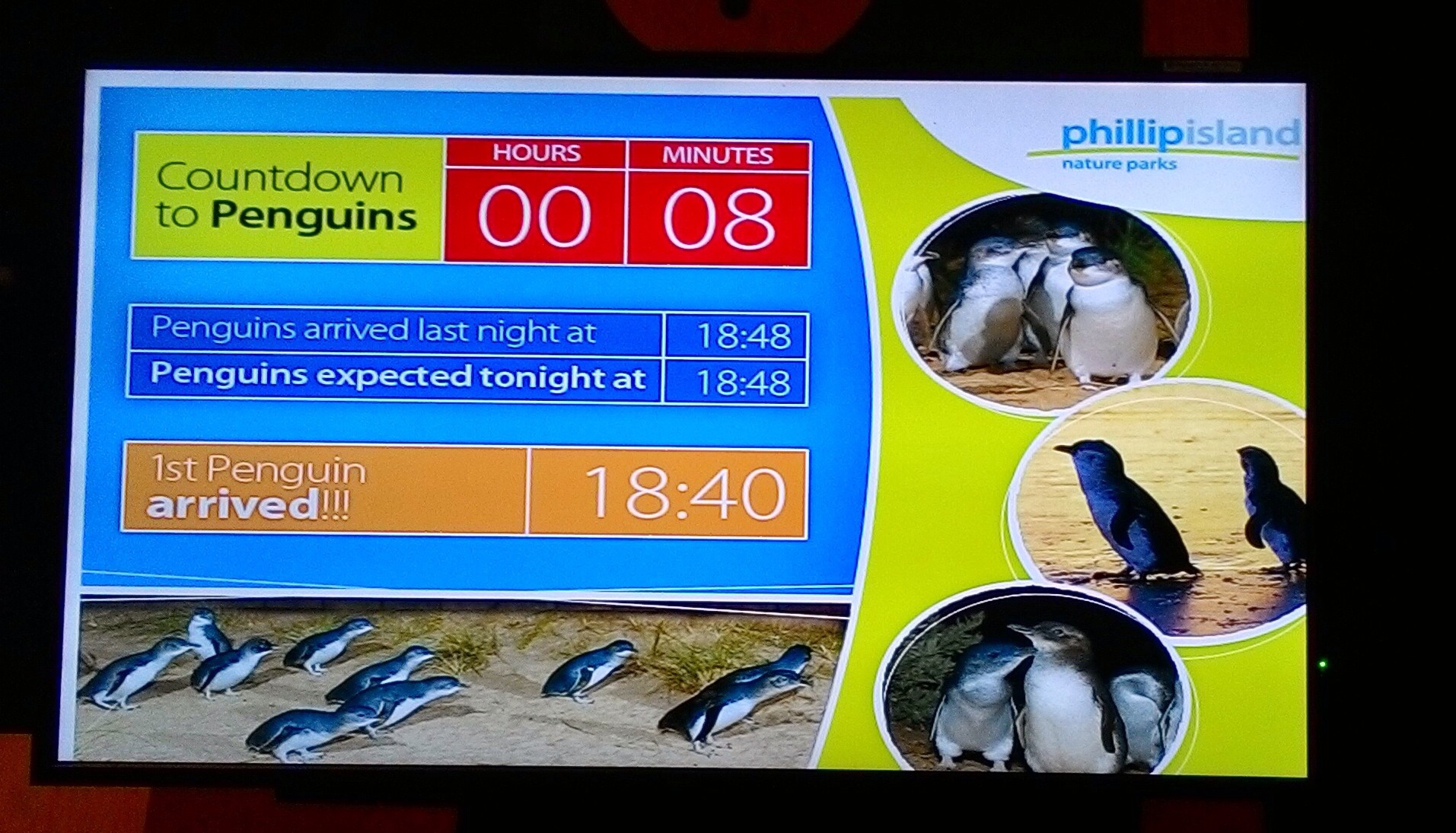 The next day we set of early (well early for us at least) as we had a long drive and wanted to stop off at Wilson’s Promotory national park. Wilson’s prom is a huge area that you could probably spend a good few days exploring. We only went about 10km in to do the 3km nature trail. Already before getting out the car we saw emus and wombats. On the walk, we saw LOADS of kangaroos including joeys – this was the first time we’d seen kangas rather than wallabies in the wild. A wombat crossed our path but much to quickly got me to take a picture and we saw some more emus too. Lots of Aussie wildlife spotted in the space of 45 minutes so it was definitely worth the early start. 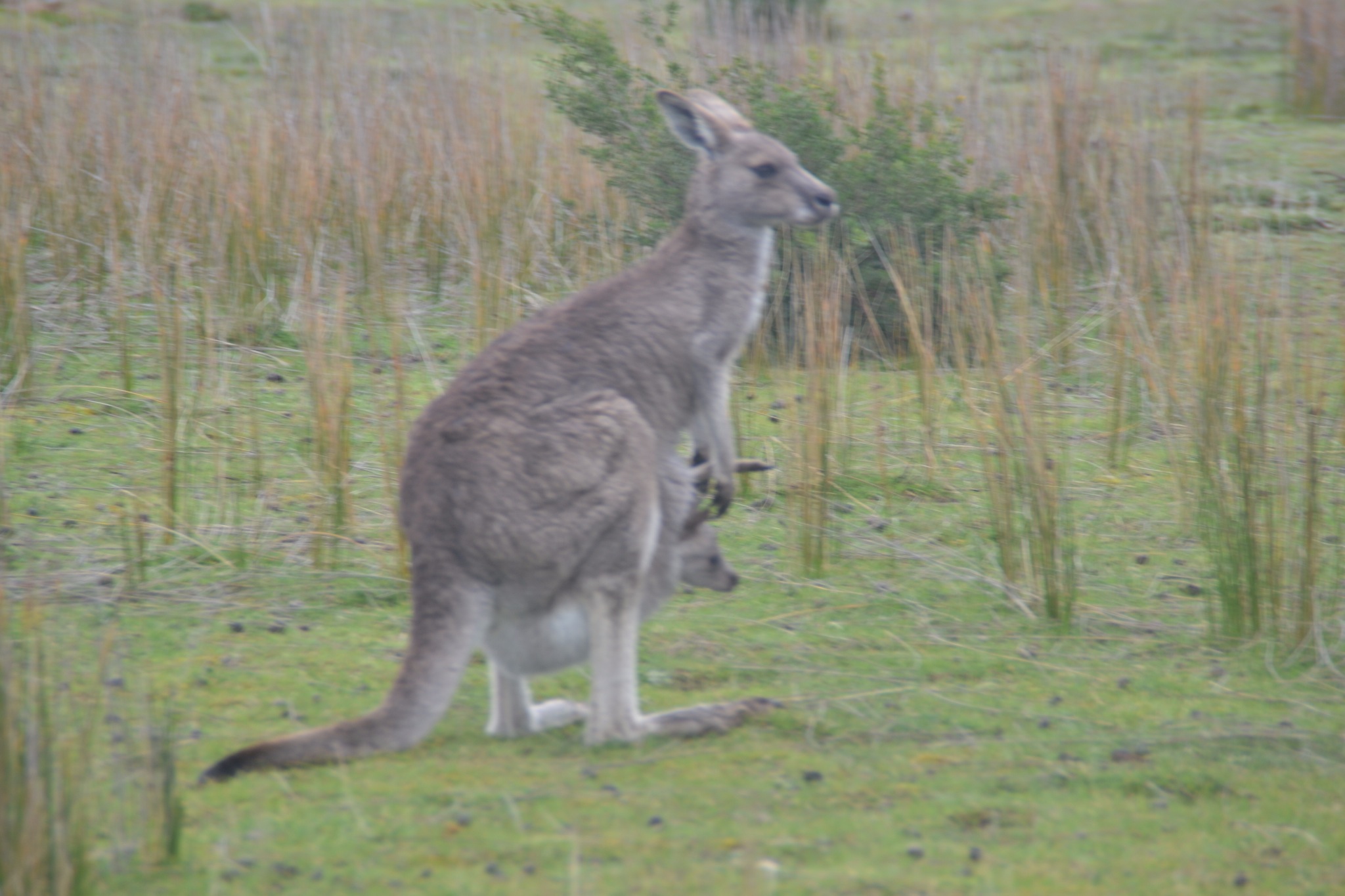 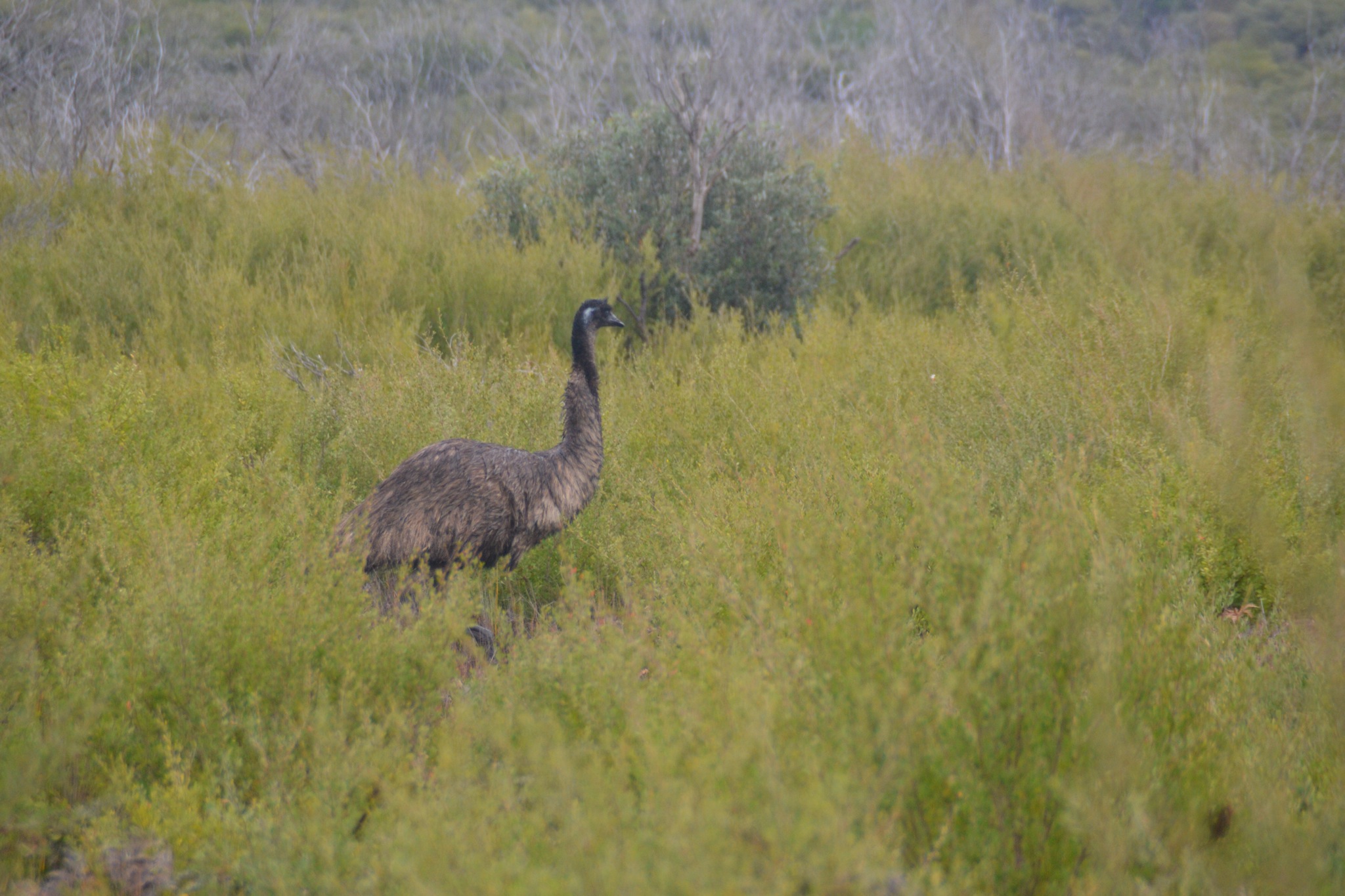 The next stretch of the drive was through the Gippsland area of Victoria. There was one stretch of road that was getting pretty boring until Dean declared that he’d seen a hedgehog. Almost immediately I also saw one, only the one I saw seemed to have had a run in with a car 🙁 I suspected and later verified that there are no hedgehogs in Australia so what we saw were in fact echidnas. The dead echidna was the first of many unfortunate creatures we saw for about the next hour. What was strange though was that it didn’t look like they’d all been hit by cars. The wallabies that we saw looked like they’d just been walking along and then just keeled over. Dean wanted to pull over to take a closer look at one but I made some excuse about there being nowhere safe to stop! In the end we came up with a theory of zombie marsupials and kept the windows shut and the doors locked.

Our stop that evening was a motel in Lakes Entrance. The place was very quiet as we were there out of season, but we found a busy restaurant for a fish and chip dinner before turning in for the night. In the morning, we went for a walk to the beach and the actual Lakes Entrance – the start of a series of inland lakes right by the coast. At the entrance, we were rewarded with the sight of a group of seals playing in the water. On the way back, Dean spotted something suspiciously snake like in the hedges so we did a quick return walk to the car before heading on! 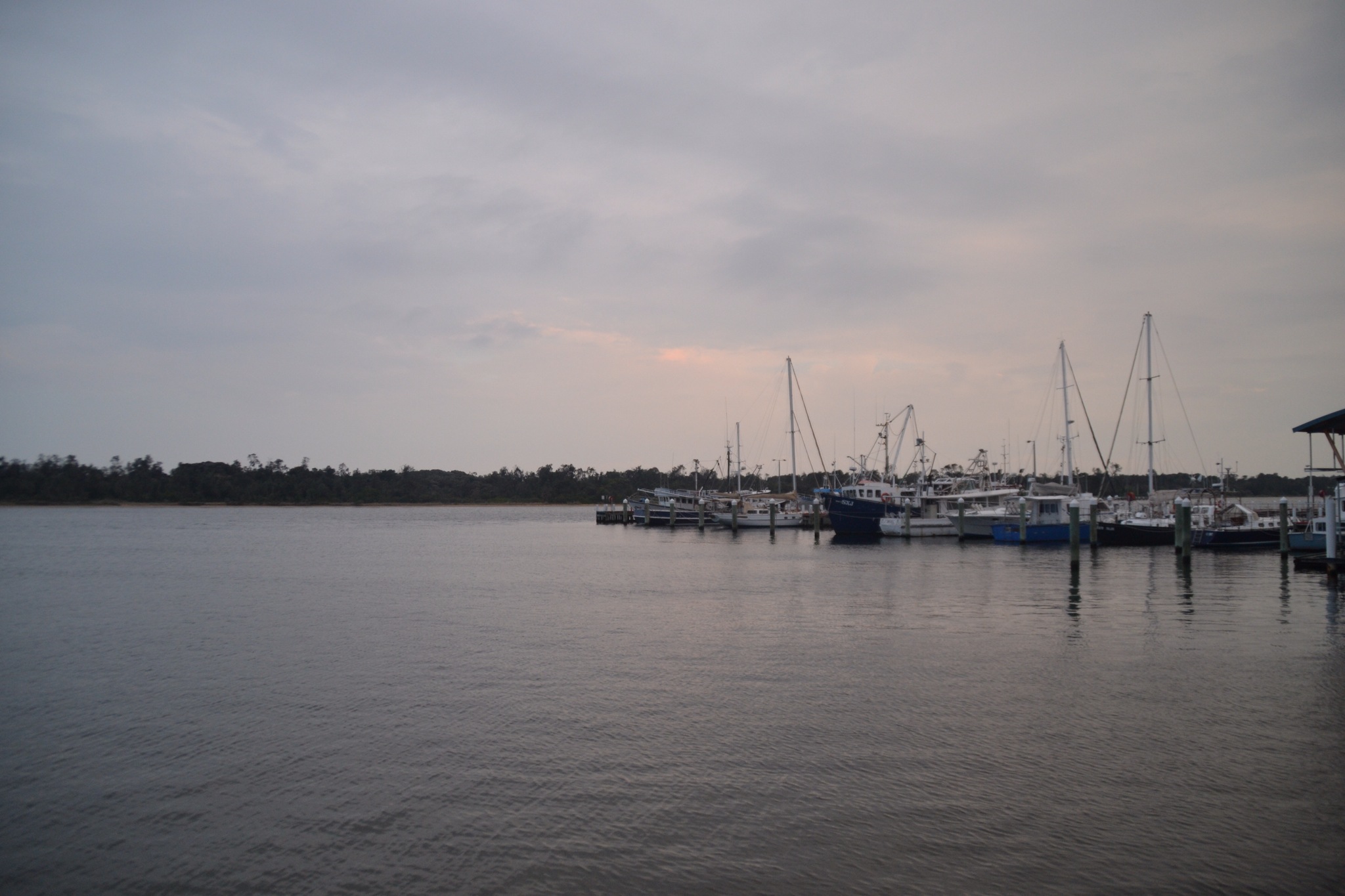 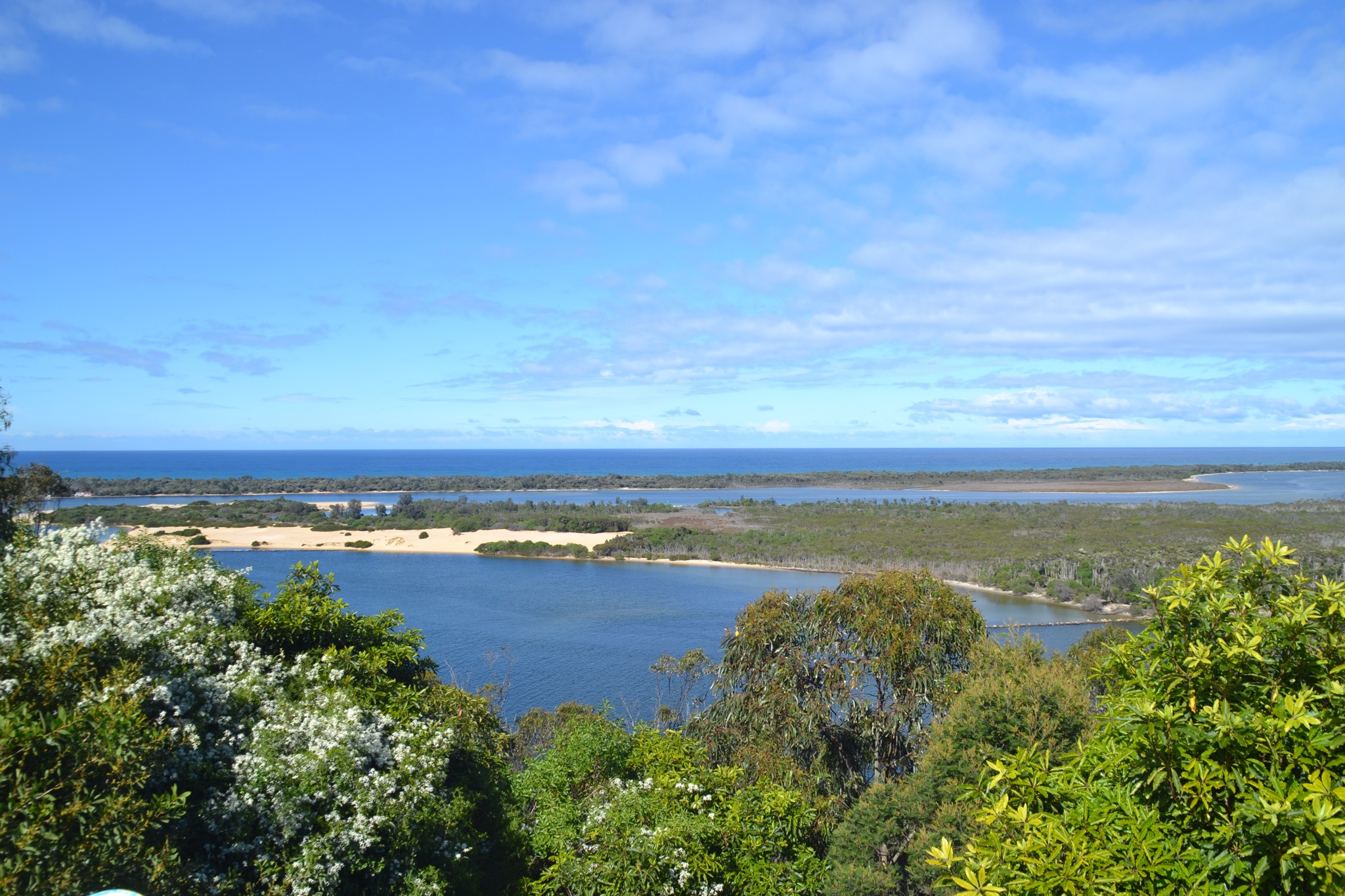 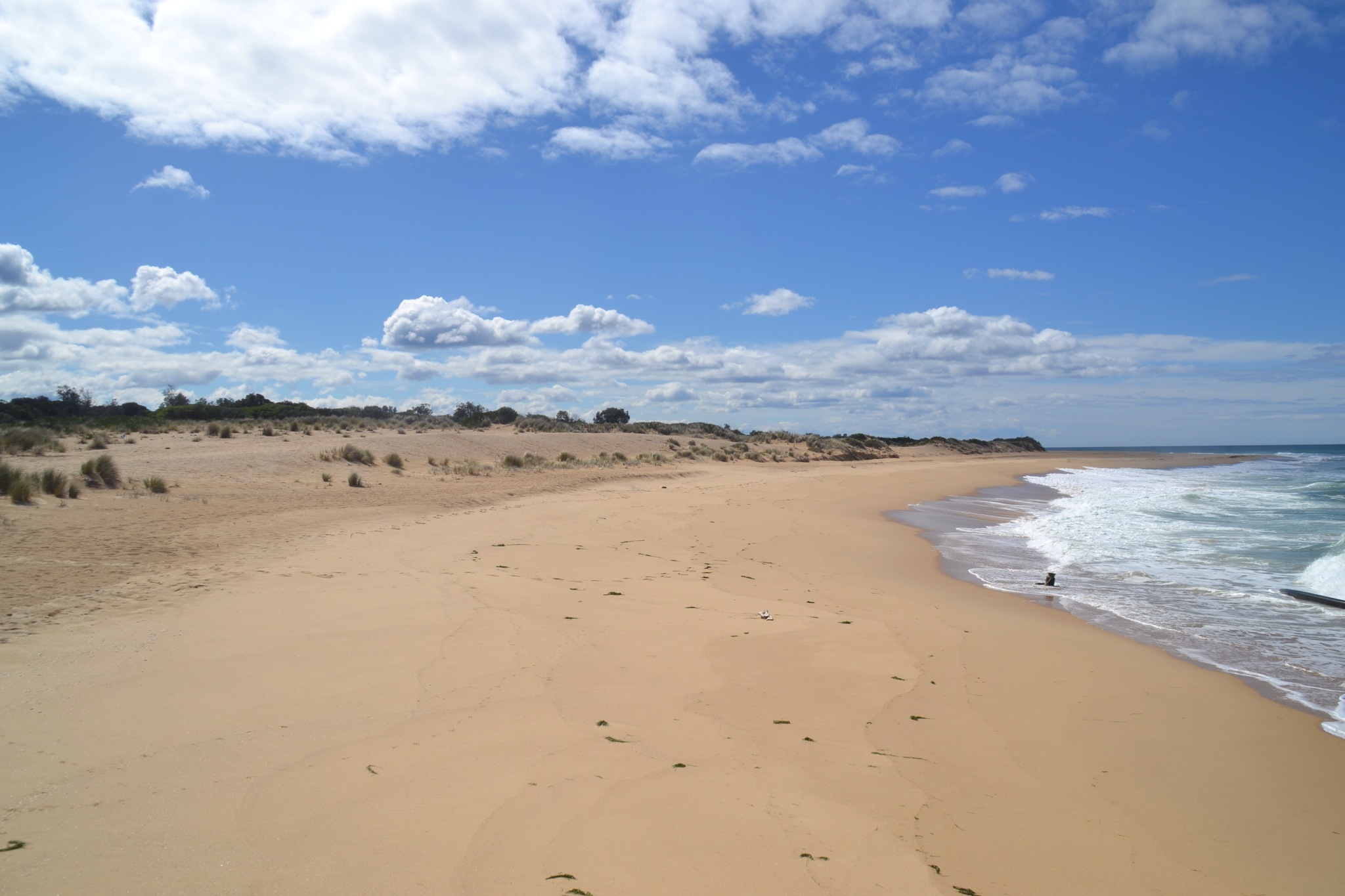 We continued North, stopping in the coastal town of Mallacoota for lunch where we spotted some pelicans hanging out by the harbour. 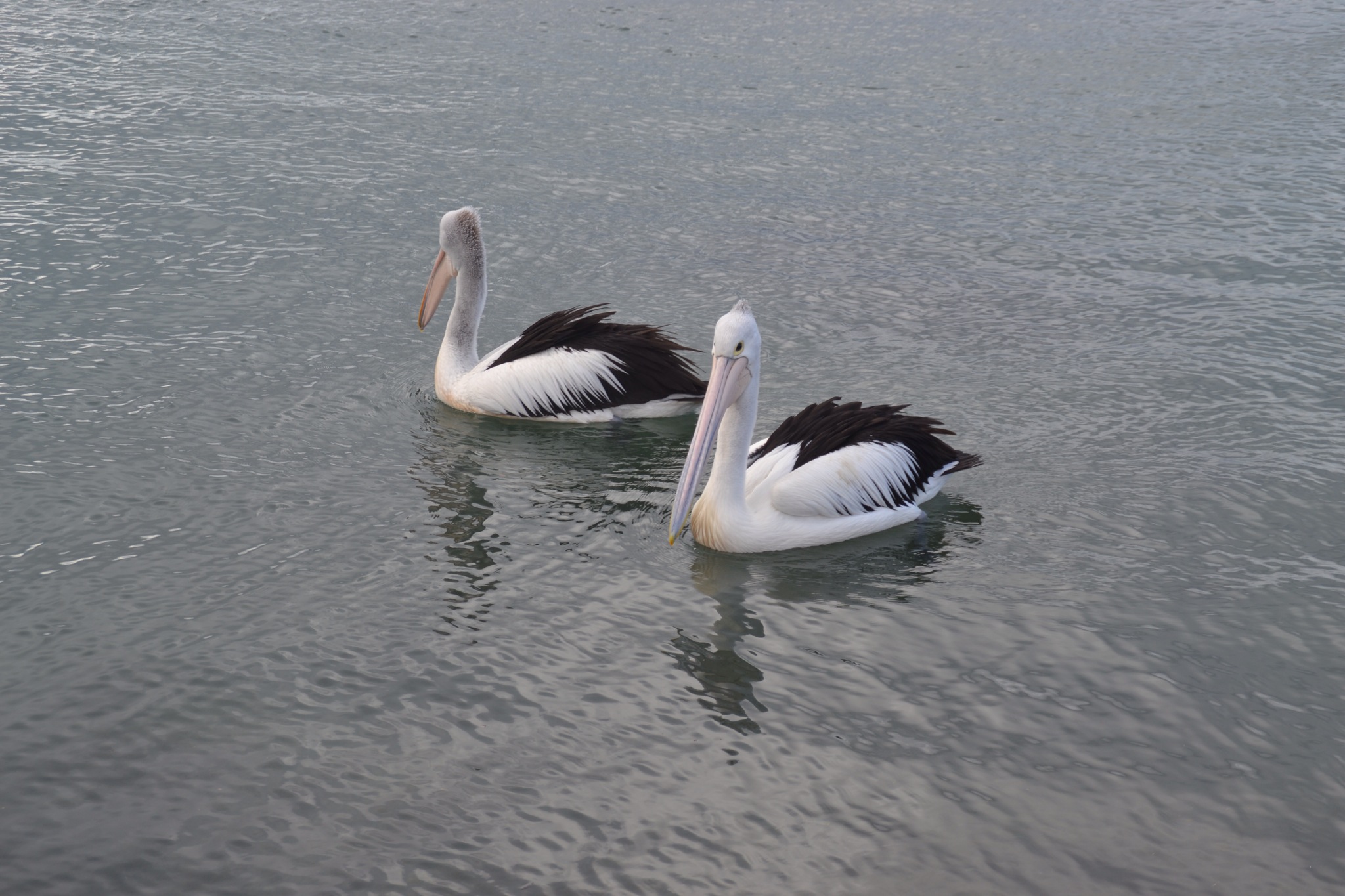 That evening, having crossed the border from Victoria to New South Wales, we stayed in the town of Eden. Eden is one of the best places to see whales from and the town loves them. There is a Killer whale museum which opened in 1931 to house the skeleton of a killer whale called Old Tom. We got there 15 minutes after closing so instead took a walk to the whale lookout point. We didn’t spot any though. 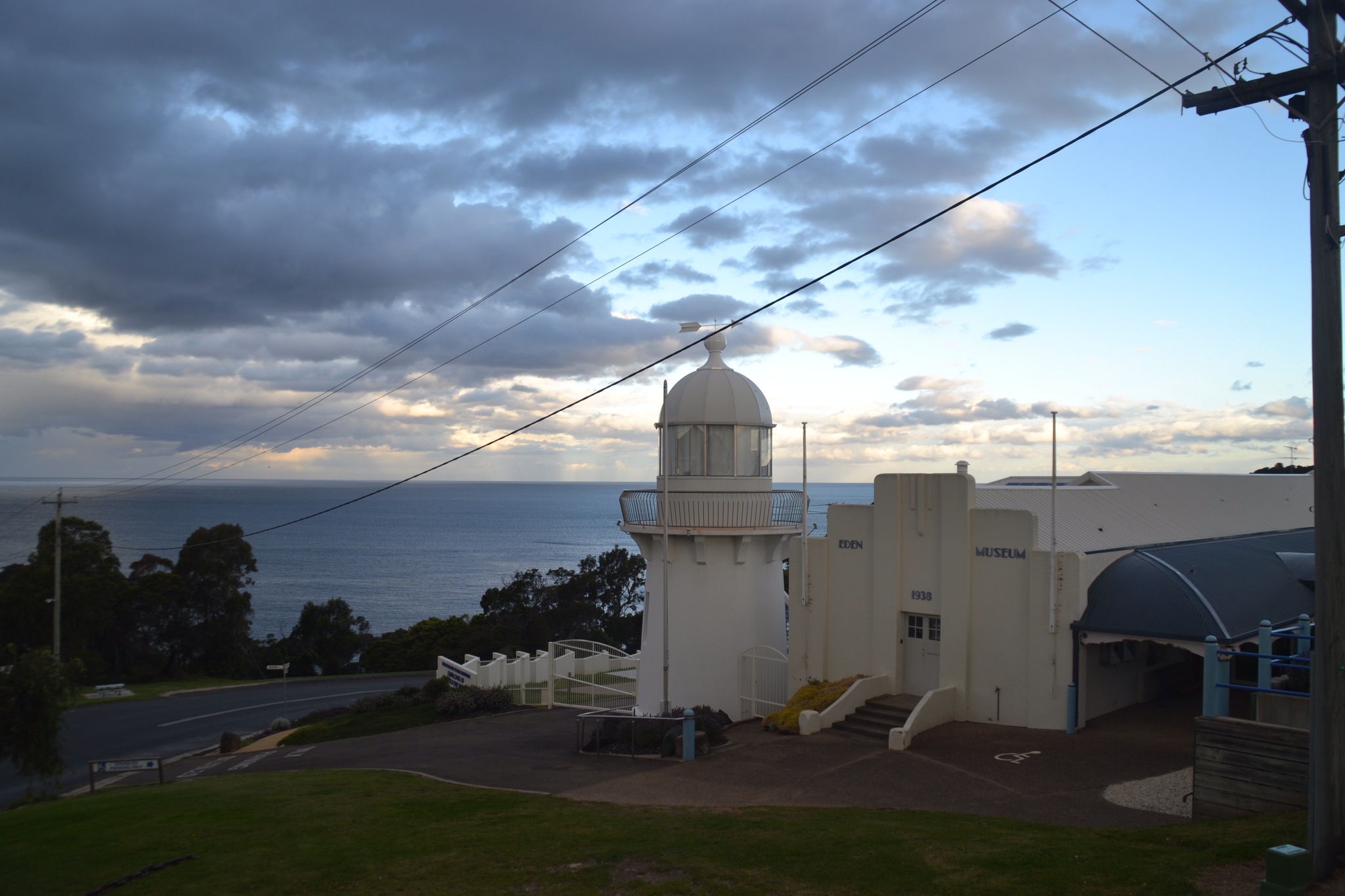 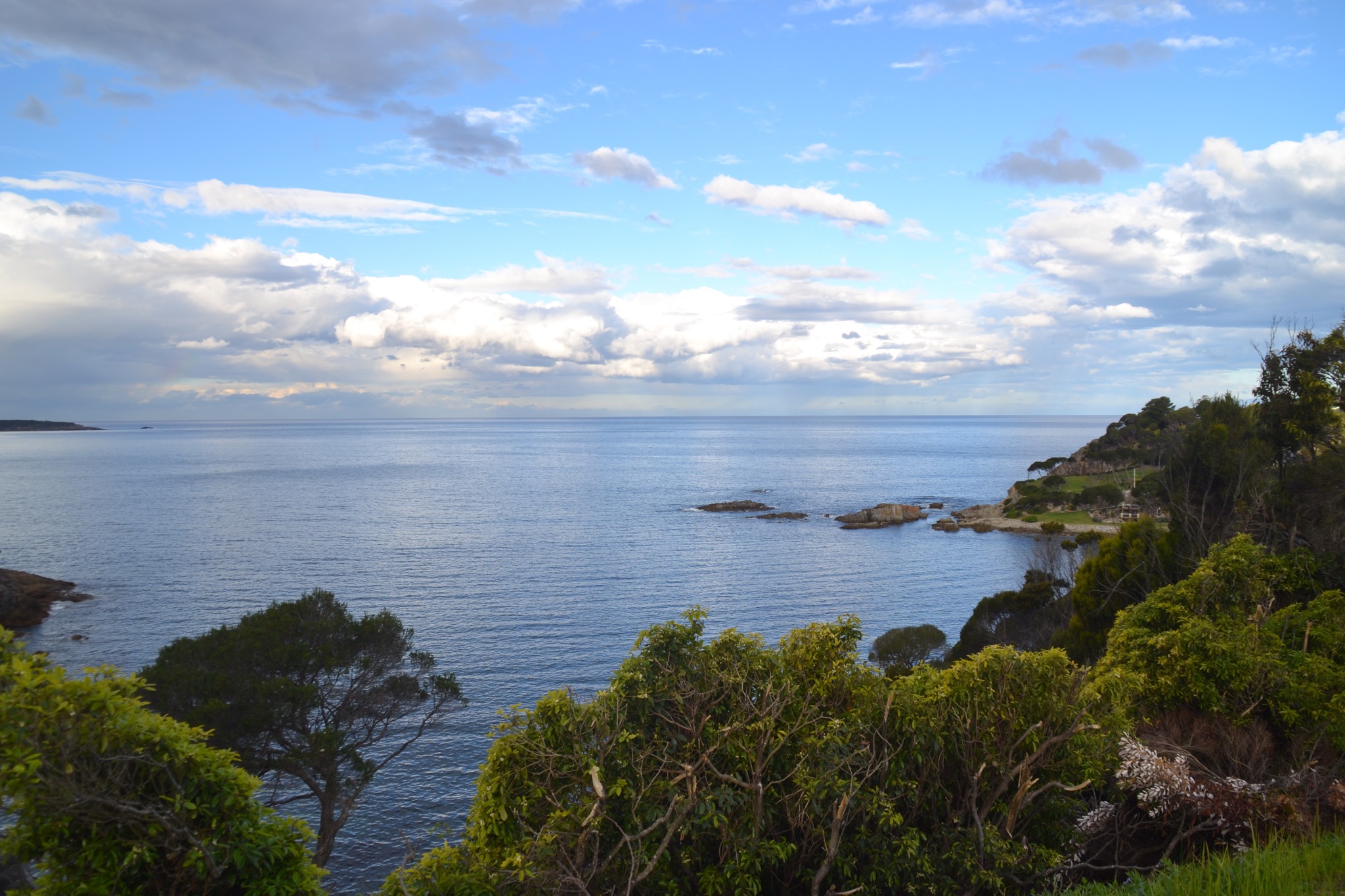 The following day, at some point we missed a turning for the main road. Our little detour took us into a little town where people had kangaroos grazing in their front gardens and ended up in a dead end at an idyllic looking beach. Only in Australia! 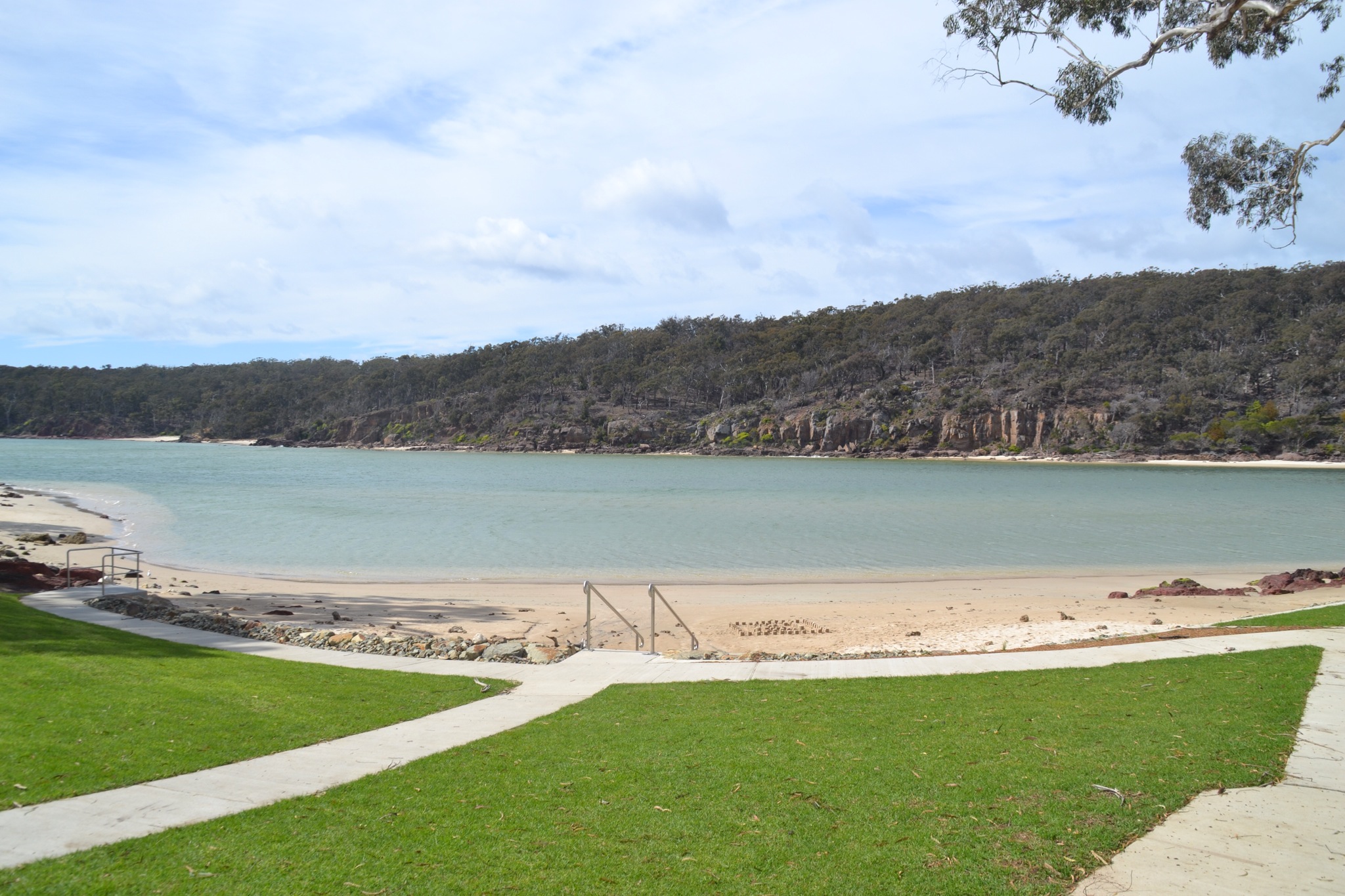 We made a stop at Jervis Bay national park, parking the car at Murray’s beach and doing a 5km walking loop from there. Again, no sign of any whales but we did see some wallabies. When we’d left the car, we saw a particularly loud bird in the car park making a racket anytime anyone came past. When we returned, he was still there, only this time he decided to swoop at us, turn around and then swoop again! We skirted round the outside of the car park and made a dash back to the car! 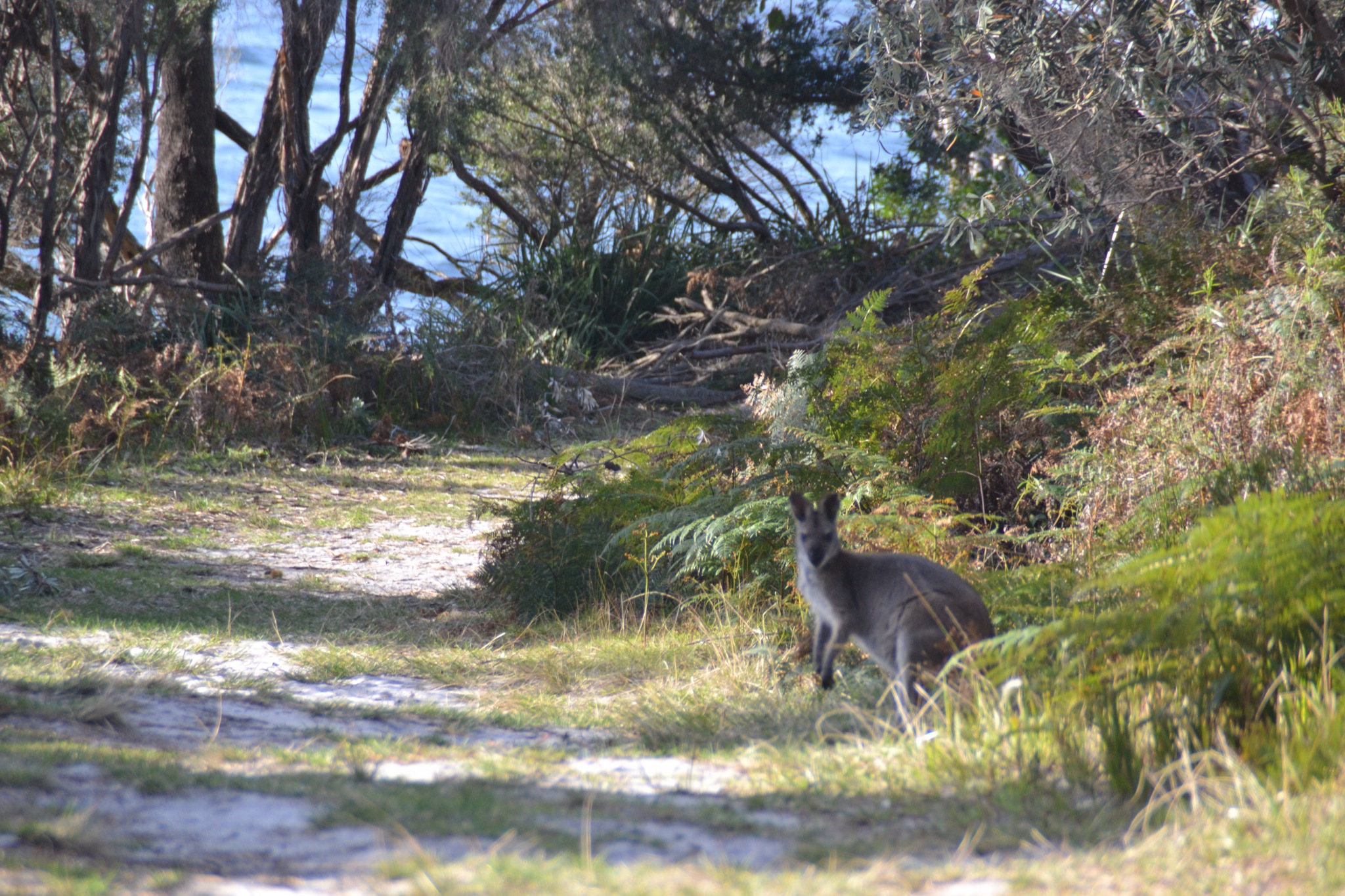 That night we stayed in another motel in another quiet town called Huskisson, two and a half hours south of Sydney. This town did have more eating choices than other places we’d been to and we had a 3 course meal at a stone grill place for $32. The meat/fish came out raw on a hot stone and you cooked it yourself.

Our road trip was fun, although the highlights were definitely Phillip Island and Wilson’s Prom. To anyone else going in low season I’d probably recommend just visiting those two for a few days from Melbourne. In the summer, the stops would probably be more interesting as you could really enjoy the beaches. At the end of the trip, we were looking forward to being in a city again. Sydney here we come!