We visited Nara, another former capital, as a day trip from Osaka. It’s a bit closer to Kyoto but as Nara is all about temples, we decided we needed a break between temple visiting in Kyoto and Nara.

Most of the sites in Nara are situated in Nara park, a wooded and grassy area full of deer. These deer were previously sacred but were stripped of their sacred status after WW2 – poor deer! They are everywhere and you can buy deer biscuits to feed to them all around the park – more on this later. A few days after our trip to Nara, we were talking to another couple who said that when they’d been there they witnessed the deer bowing, and some Japanese visitors bowing back. 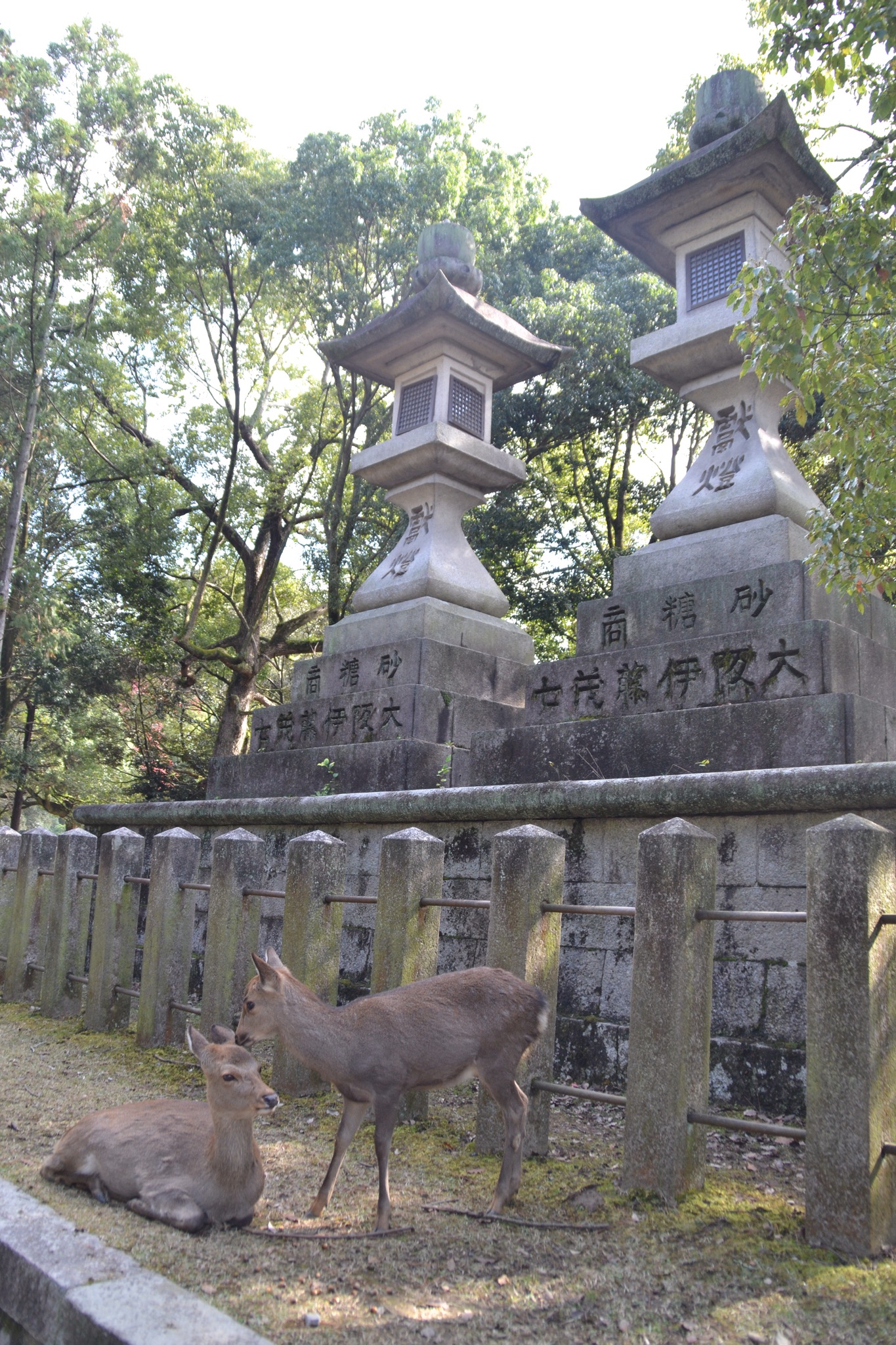 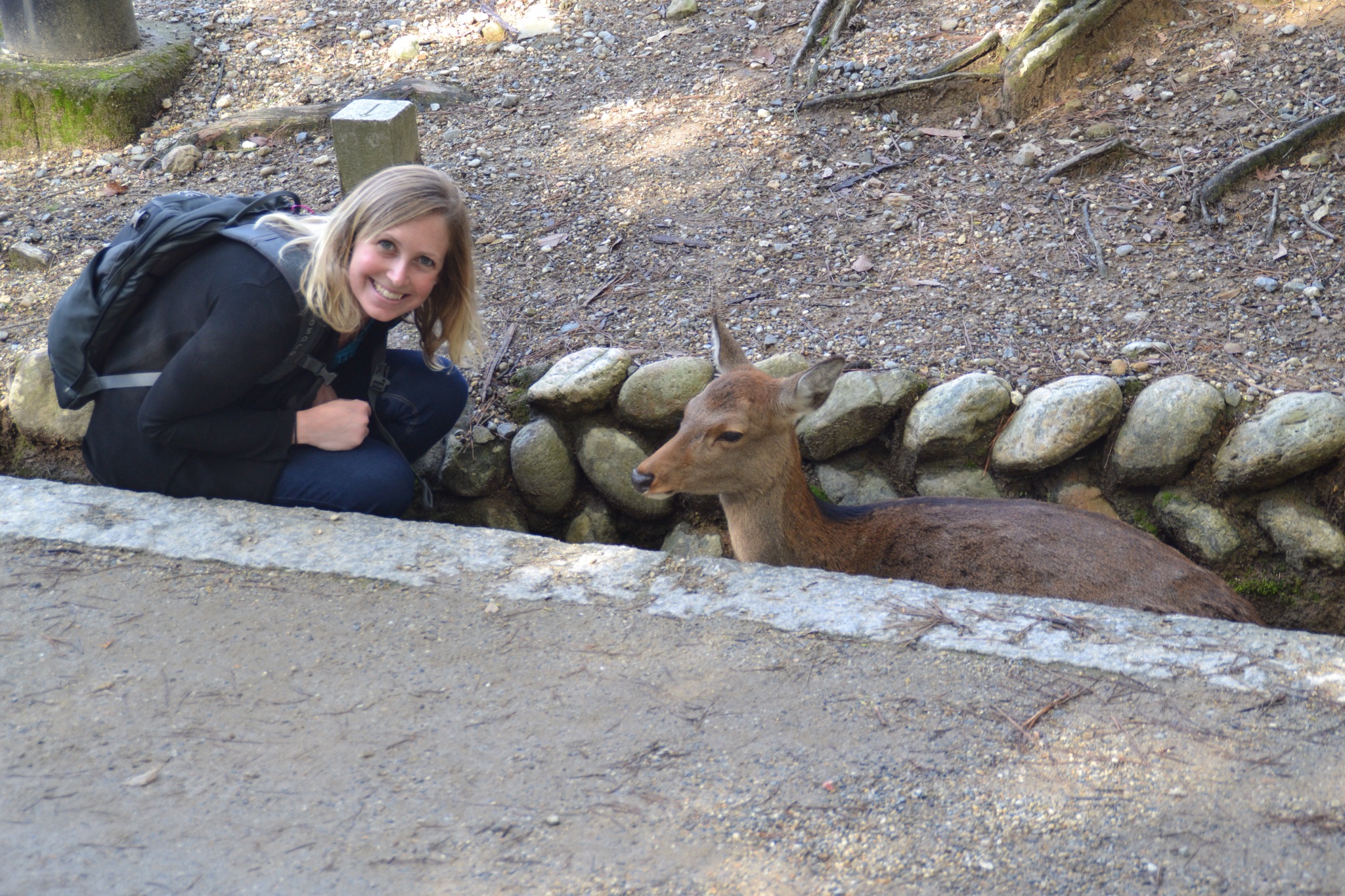 We followed a 5km loop round the park, starting at Kofuku-ji, the second tallest pagoda in Japan after one in Kyoto which we didn’t see. It was here that we spotted the first of hundreds of deer, just chilling outside the temple and not at all bothered when I went to sit next to him. We continued on to Kasuga Taisha, a temple famous for its lanterns which line the paths approaching the temple as well as adorning the temple walls. They hold lantern festivals a few times a year when they are all lit and I can imagine that this would really be beautiful. 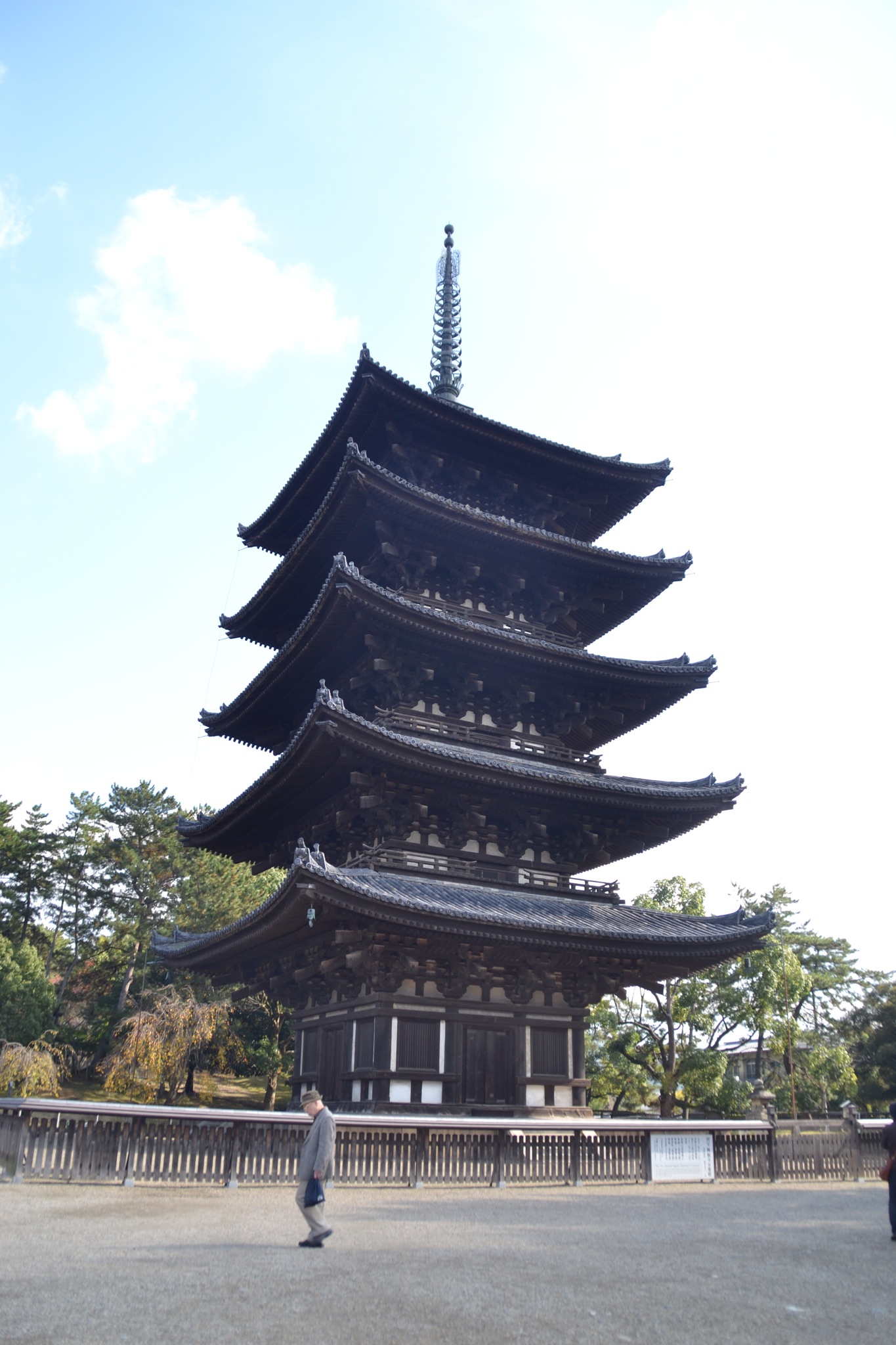 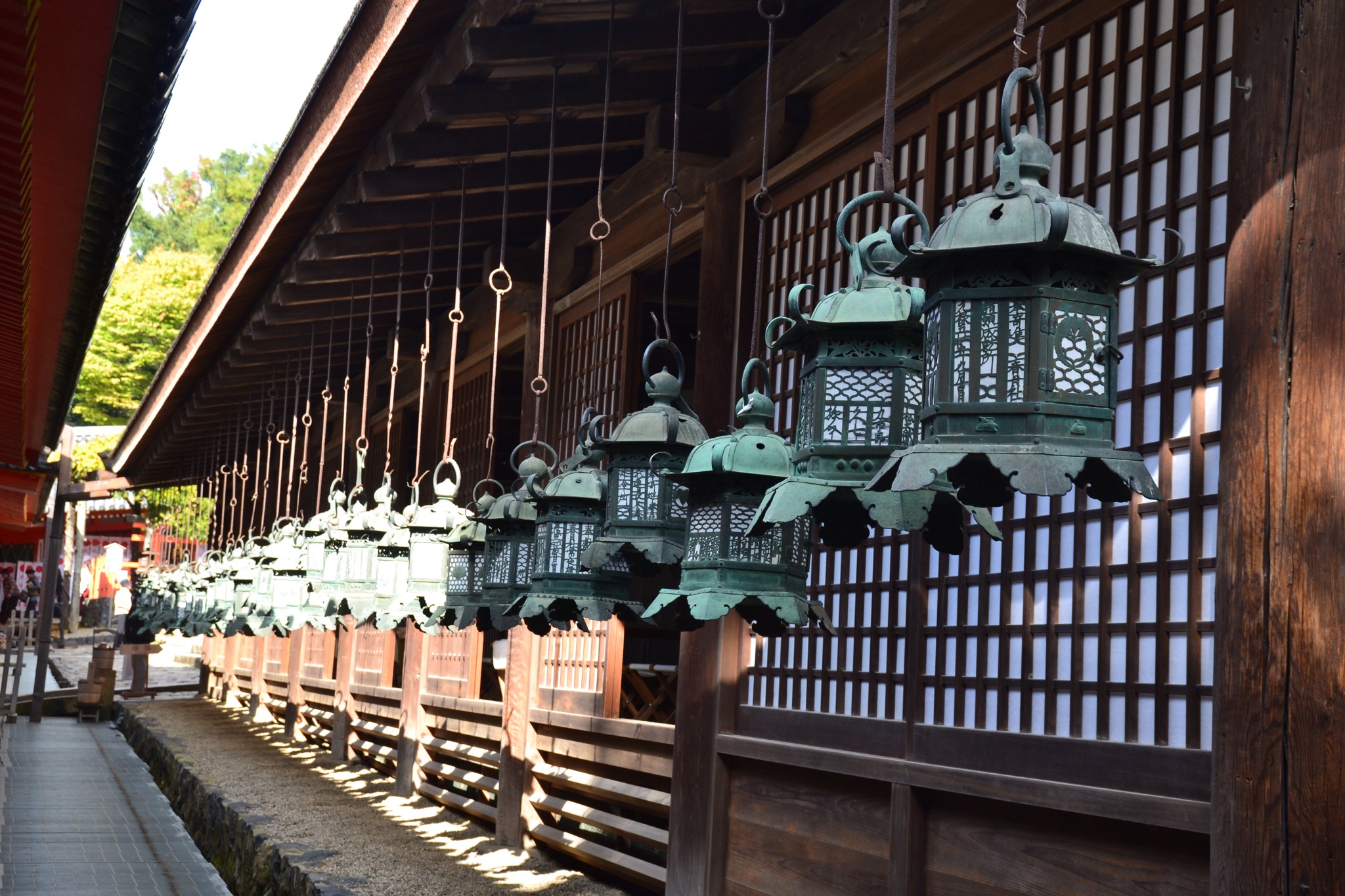 Nara’s showpiece as it were is the temple of Todai-ji. There are a number of sub temples in the grounds, we visited Sangatsu-do, dating from the 740s and housing some impressive and very old wooden statues, and Nigatsu-do which had a verandah with views over the temple complex. The main hall is Daibatsu-den hall, the largest wooden building in the world, which houses a 15m high Buddha, one of the largest bronze statues in the world. His hand is the height of a human. Todai-ji definitely had the wow factor we’d missed in Kyoto. The grounds and the scale of both the hall and the Buddha were an impressive and beautiful sight. 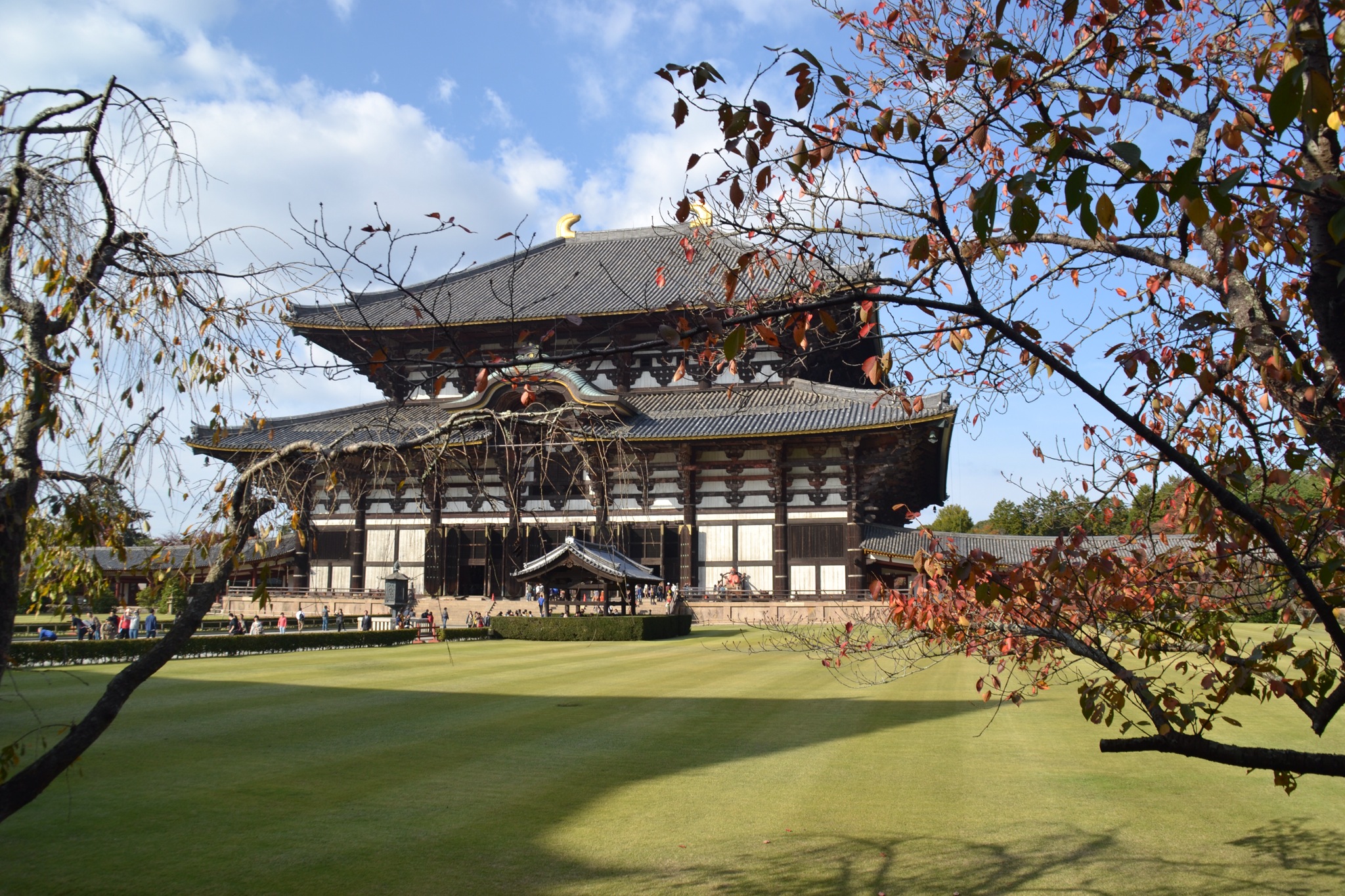 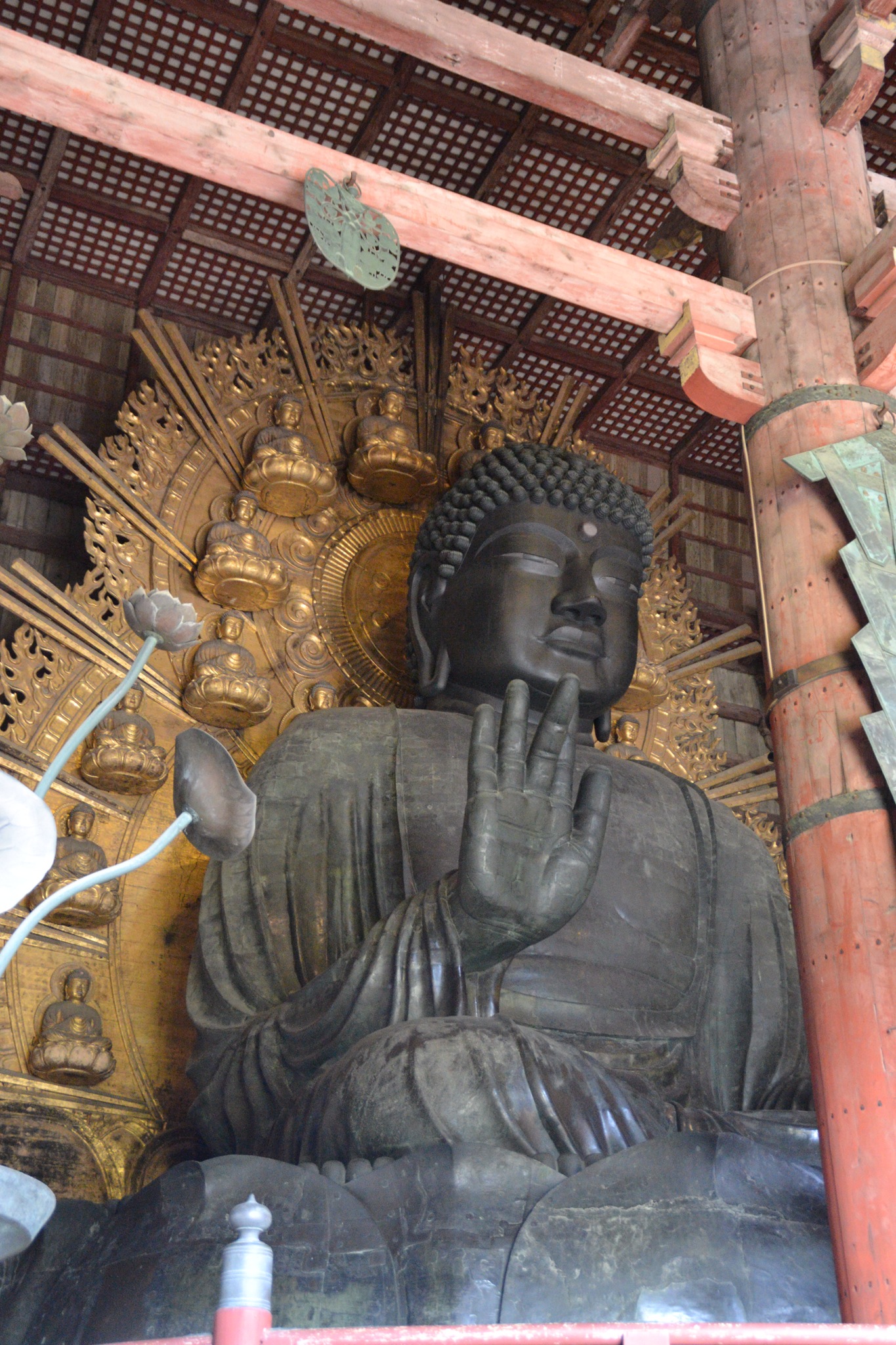 As we left Todai-ji, I decided to buy some deer biscuits and feed these beautiful looking creatures. I managed to pick the most touristy, busy part of the park where the deer know to hang around waiting for biscuits. As soon as I’d been given the biscuits, one deer came over and started nudging me on the leg. The next thing I knew, I was surrounded and a particularly hungry male deer was biting me on the bottom. This was not how I’d seen it in the rest of the park! Even when the biscuits were gone, they still surrounded me and were only convinced I had none left when one of them ate the paper wrapper containing the last of the crumbs (I’m really hoping they make the wrappers deer friendly!) 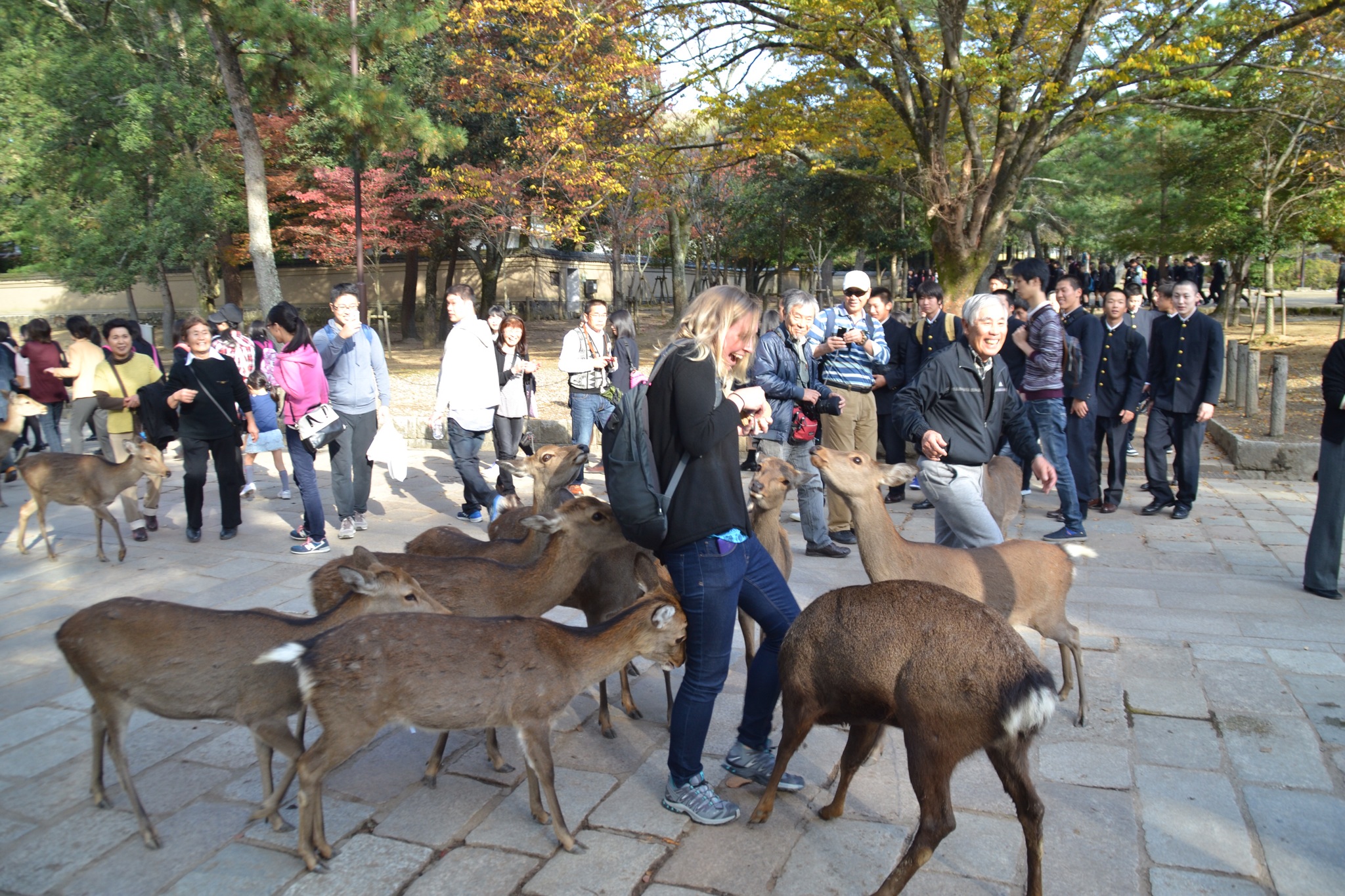 Nara was definitely a worthwhile daytrip. Most visitors apparently skip it, choosing to visit Kyoto, but we found Nara a much more rewarding destination. Everything is in a much smaller area, the park is a great setting for the temples and the deer are pretty special too. The town seemed pretty small, so it probably wouldn’t make a great overnight stop, but for one day from Osaka it was perfect.