After the awe inspiring scenery of the Grand Canyon, it was time for a complete change as we headed to Las Vegas. Dean had been last year for his stag do and declared it his favourite place in the world and that he plans to go every year so I was excited to see what the fuss was all about!

We arrived in the dark so got to drive down the strip with it all lit up. I was surprised at how long the strip is and it really is just a strip. Head East or West by one block and it’s a completely different place as we discovered on an excursion to a laundry!

We stayed at New York New York, a New York themed hotel complete with it’s own roller-coaster and of course casino. It was at the South end of the strip from where it was easy to explore some of the other nearby casinos such as Excalibur (fairytale themed), Mandalay Bay, Luxor and the Bellagio. The Bellagio had some pretty good Christmas decorations, but it’s hard to feel Christmassy when it’s 20 degrees outside! 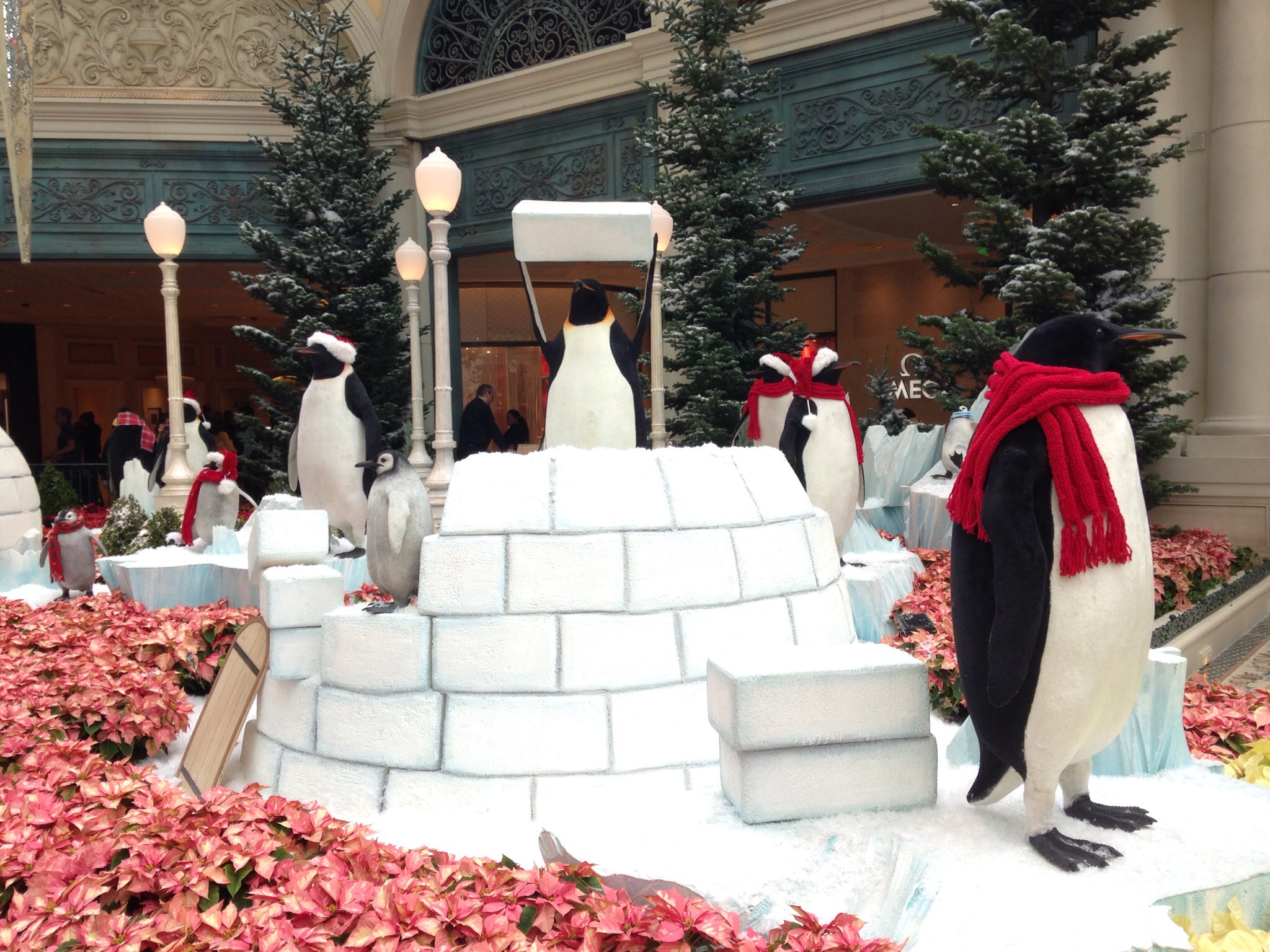 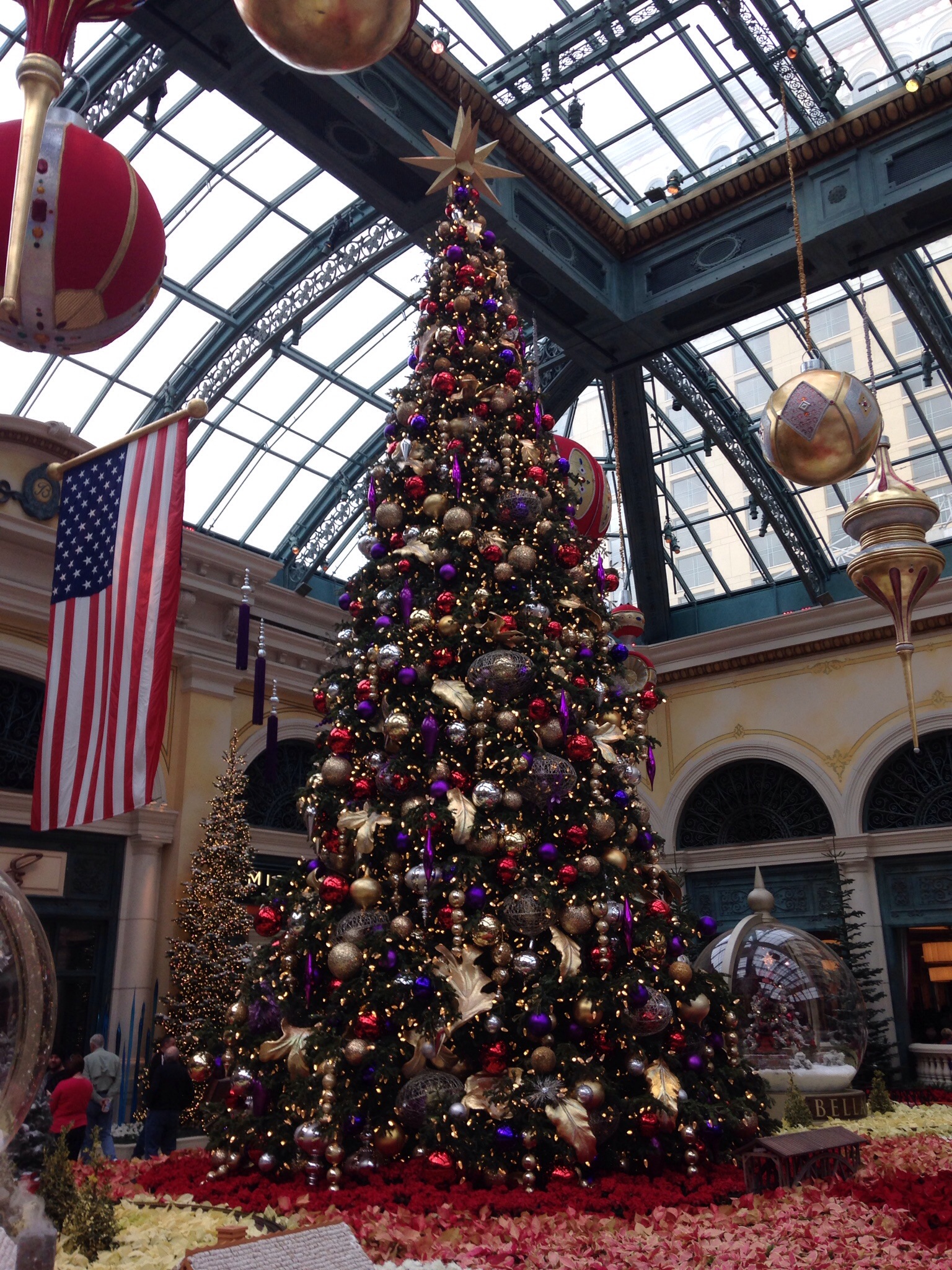 Unlike Macau, Vegas isn’t all about the gambling. There’s definitely more of a party atmosphere and there are quite a few stands selling huge cups of frozen cocktails. We bought one of the smaller sizes and it still lasted us a good couple of hours! 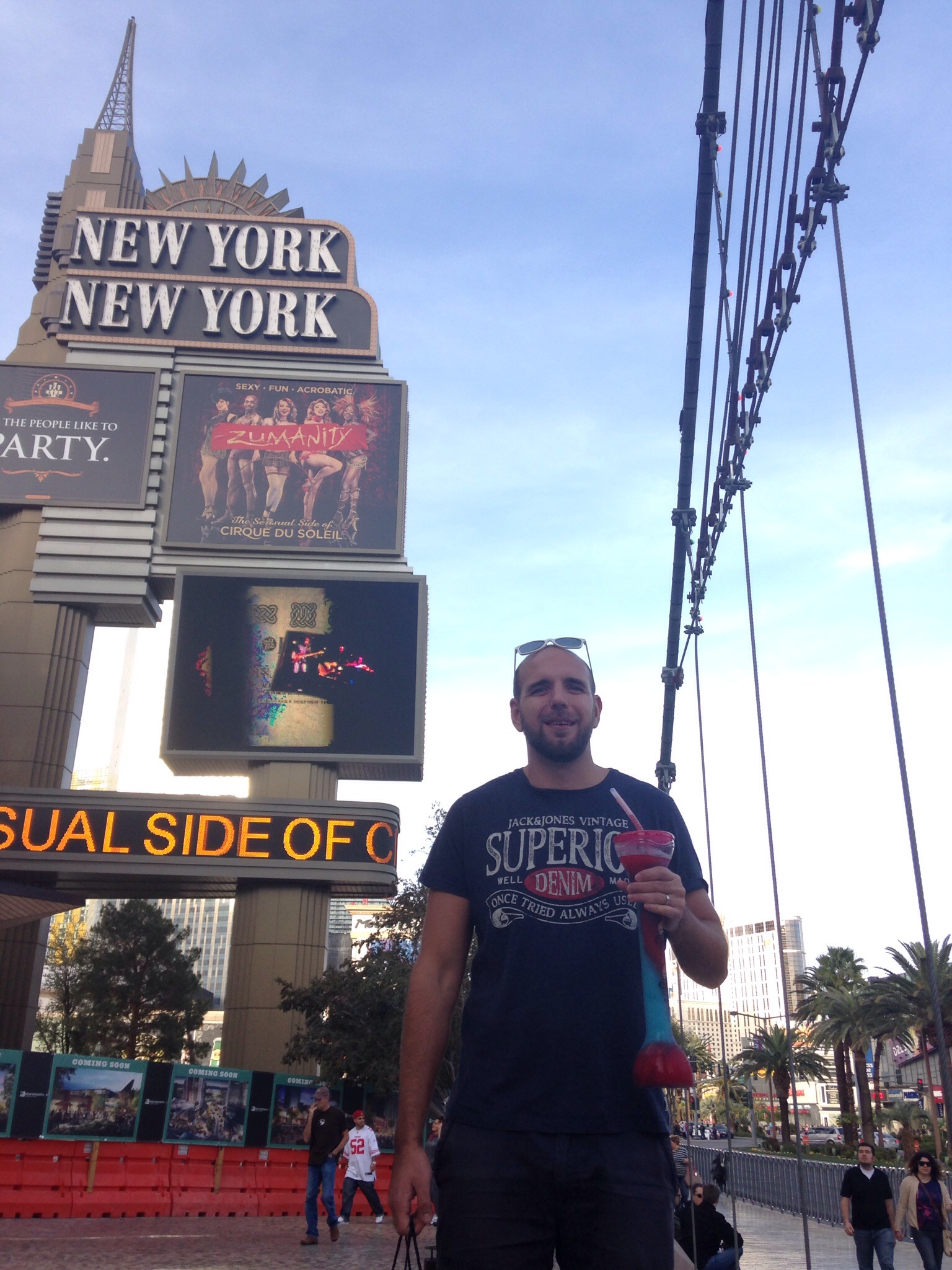 Having tried amazing steak in Japan, we wanted to have some American steak too. Well American as you can get in a British themed Gordon Ramsey restaurant in Paris casino. Alongside the menu, they also had a trolley with all the cuts of meat on so you could see what each looked like. I actually went for one of the Japanese style cuts while Dean had a more American steak. We both thoroughly enjoyed them though which was good as it wasn’t a cheap meal! 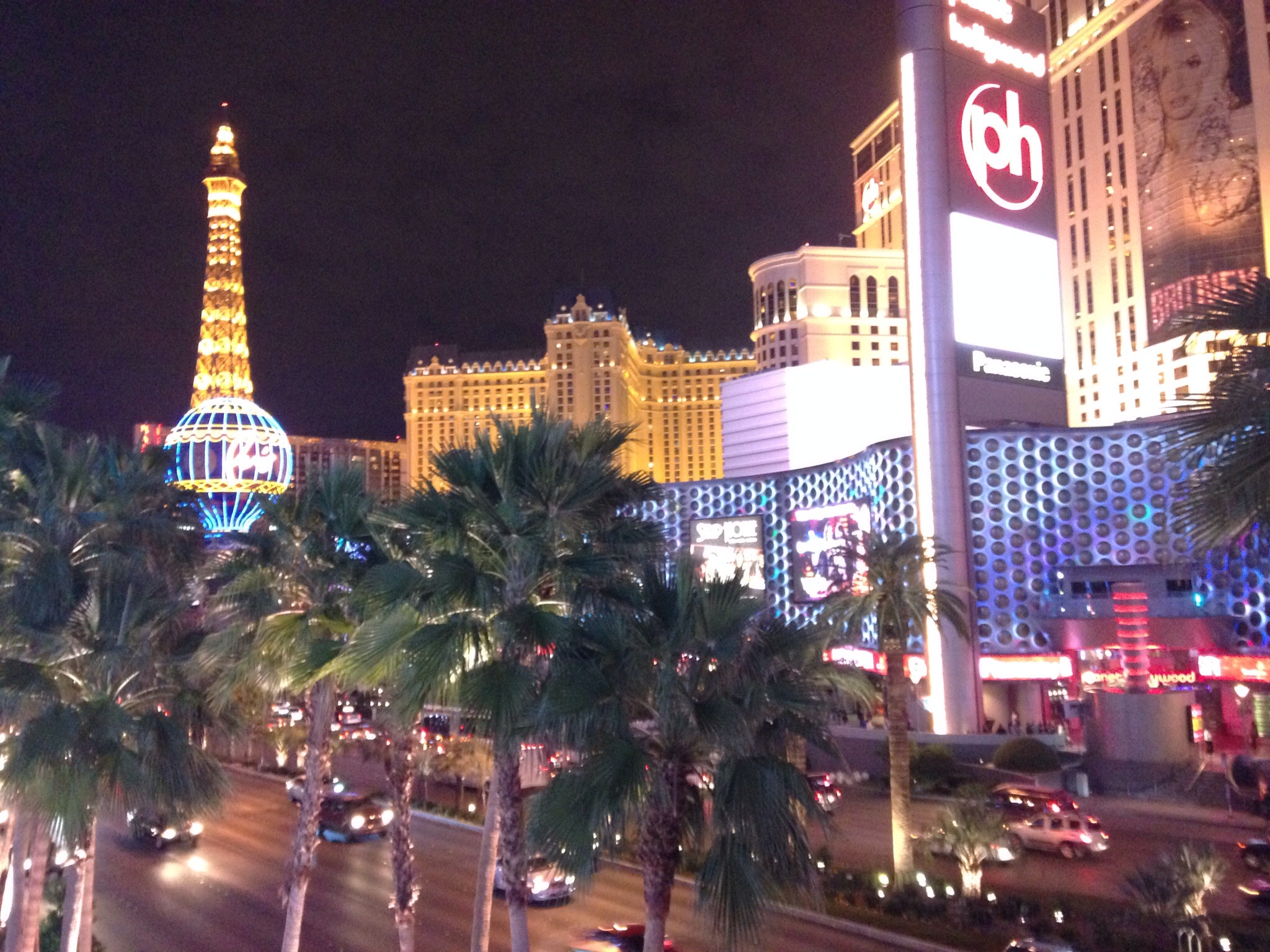 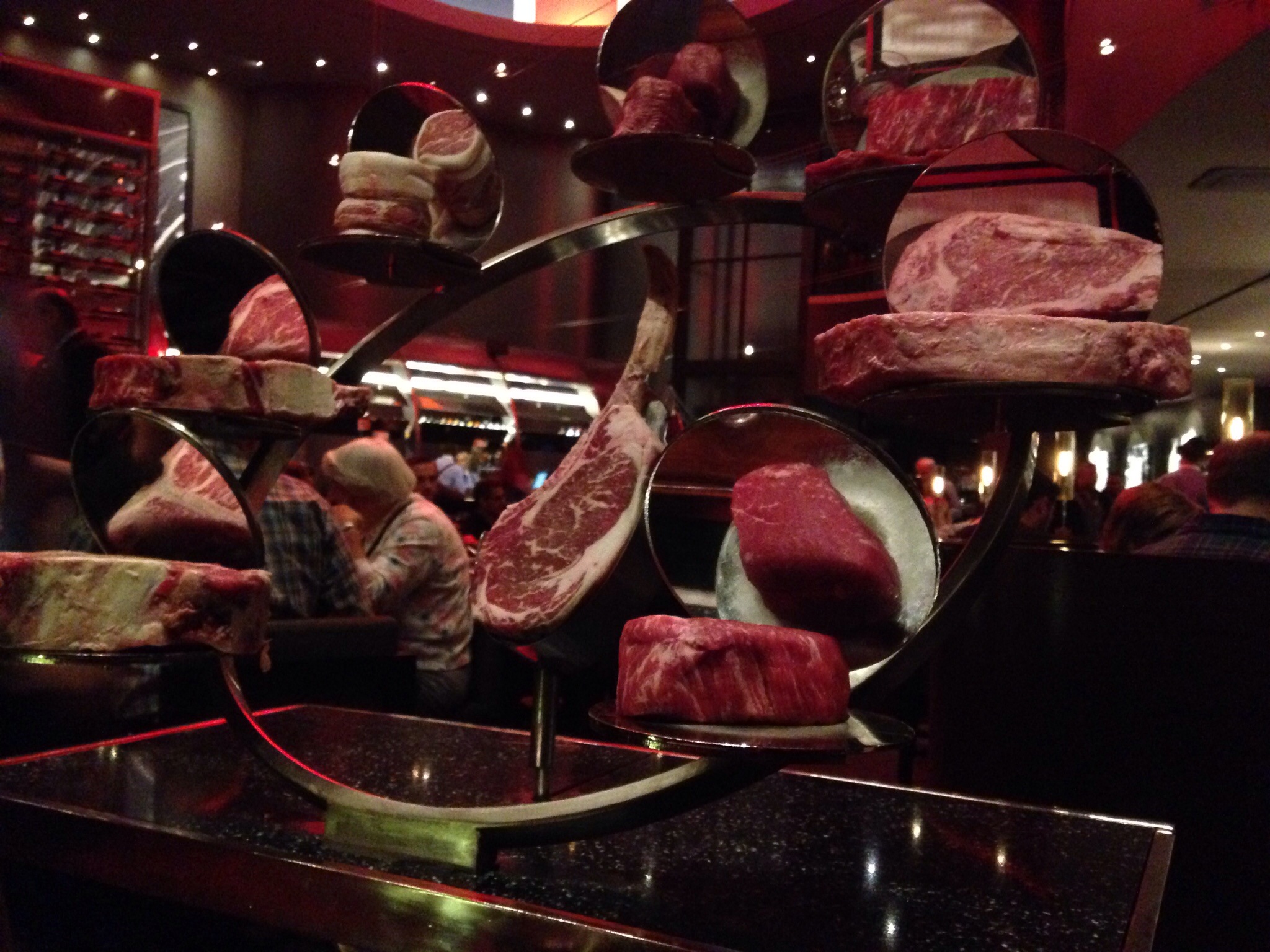 On the Saturday, I woke early and headed out for a run at 7am as otherwise the strip is too busy. It was definitely a different view seeing the street quiet and also a challenging run as there are quite a few stairs to cross over the roads. Near the end of my run, I ran down the the famous Welcome to Las Vegas sign and was about to take a selfie when the King himself offered to take my picture for me. I felt bad I didn’t have any money to tip him, so offered him a gummy sweet from the bag I had zipped into my sweaty running tights, but unsurprisingly he declined! 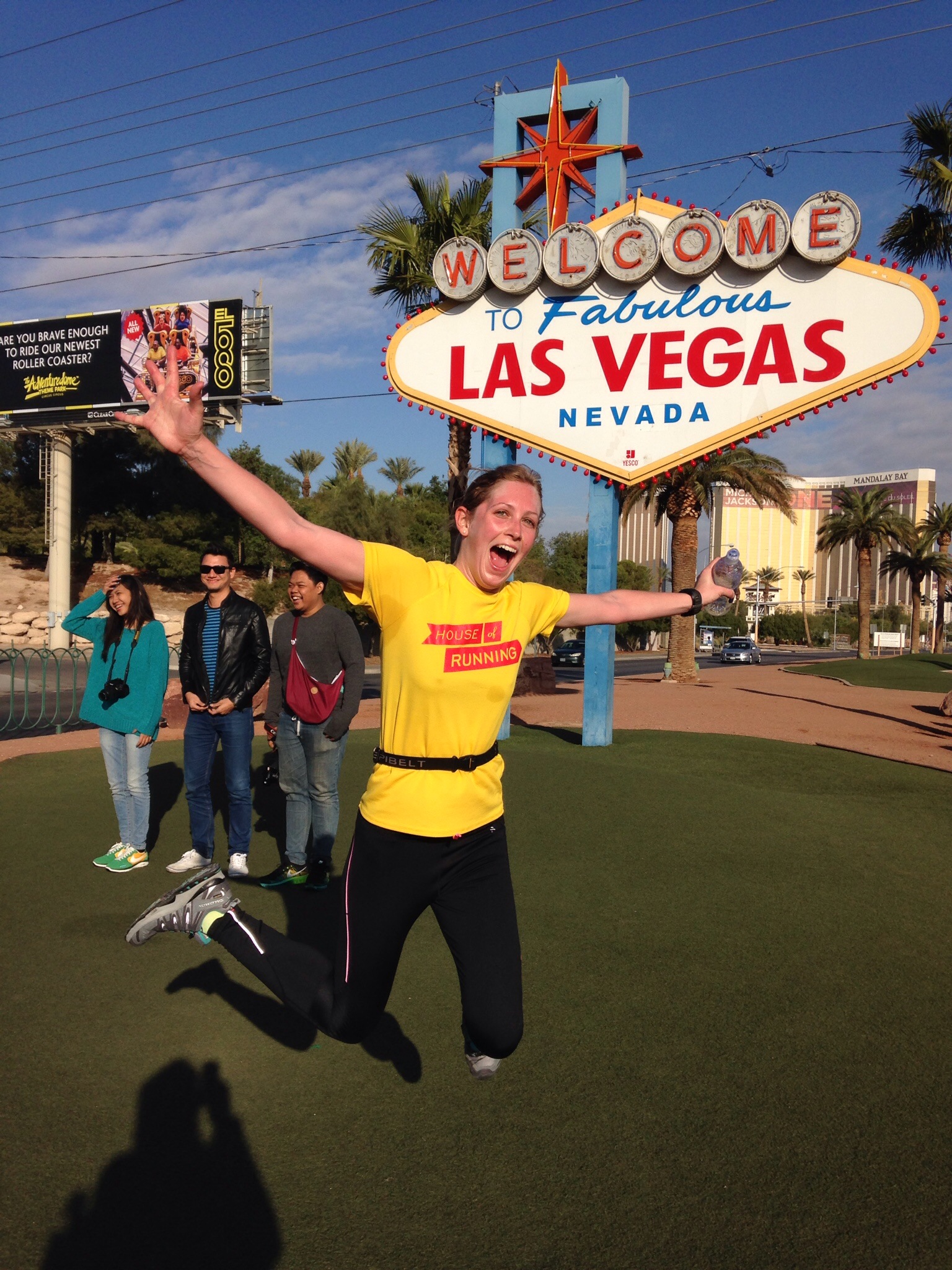 On the Saturday evening, we had tickets to see David Guetta (one of our favourite DJs) at XS nightclub at the Wynn. Most of the club was outside, set around a pool but luckily we had all access tickets so we could go inside as it wasn’t super warm at night. The club also had some tables and Dean tried Blackjack for the first time. The croupier explained how to play as he went and after ten minutes he was up so called it a day! We weren’t all that impressed in the end with Guetta’s set compared to other DJs we’ve seen live but it was a fun night to go to the club. 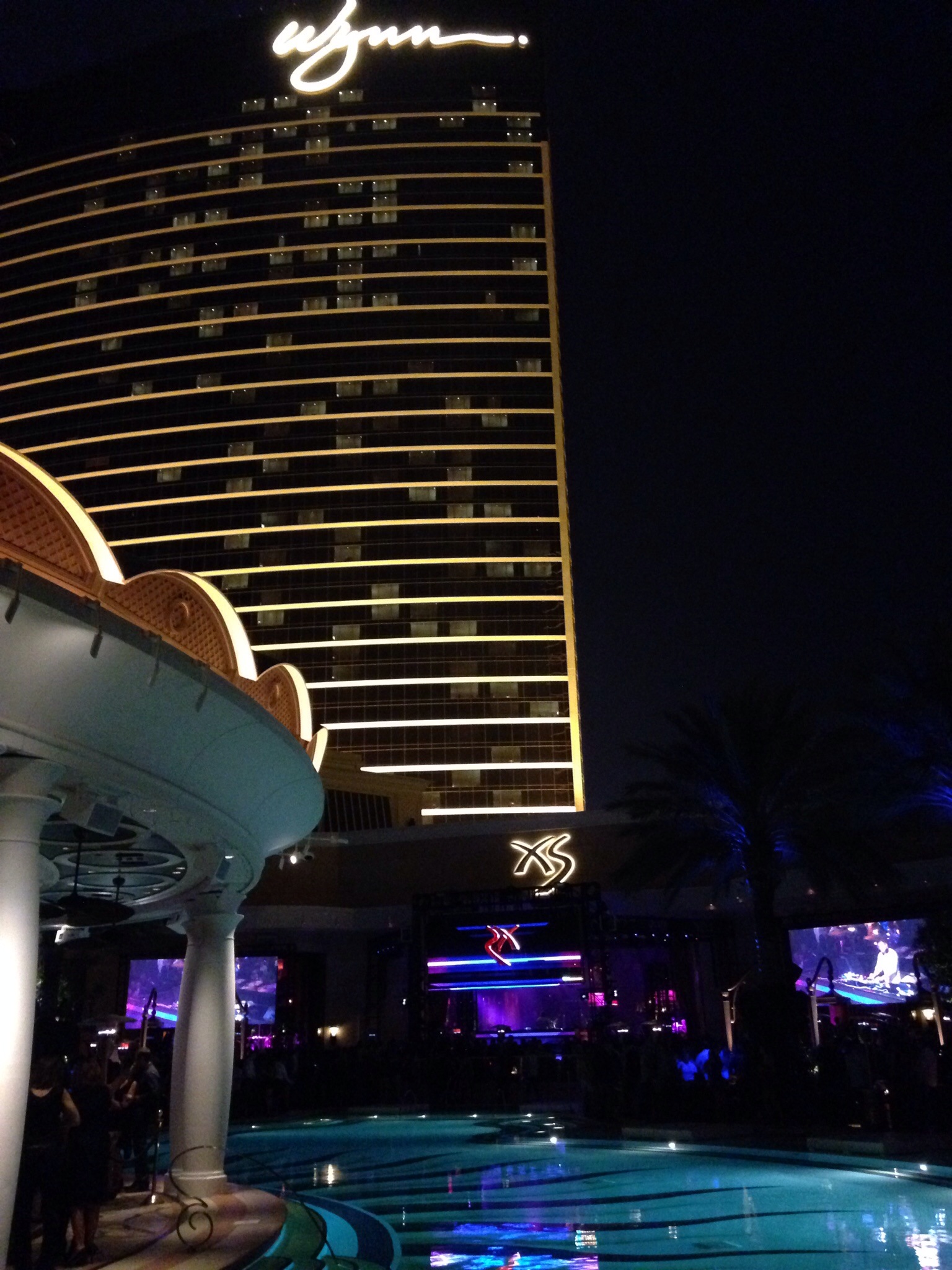 On the Sunday, we headed to the Bellagio to have a buffet lunch. There are quite a few buffets in Vegas, with a huge variety of foods available. Between us we had cooked breakfast, roast pork, beef and turkey, sushi, pasta and pizza. Probably for the first time in my life I didn’t have room for dessert and it was the fullest I’d ever been! In the evening, we went to one of the many shows in Las Vegas, Zumanity, which was an ‘adult’ cirque de soleil production. It was a combination of risqué jokes, acrobatic acts and a midget flying through the air. It was a lot of fun and had the whole theatre laughing, and in awe at some of the performances.

We had originally booked four nights in Vegas, but ended up extending our stay by an extra night so we could go to the rodeo. It turned out we were in town at the same time as the NFR (national finals rodeo) which is a big deal in the world of rodeo. There were loads of people wearing cowboy hats in a non ironic way everywhere we went and after seeing some of it on TV, we decided it would be worth trying to get tickets for. We were very glad we did as it was a huge amount of fun. There were a few different events, clinging onto a bucking horse, wrestling a little cow to the ground, team wrestling a little cow, riding a bull and lassoing a little cow. Having no allegiance to a particular state, we mostly cheered for the little cows, especially those which put up a real fight and refused to go down! It was interesting to see a different side of the US as most people there were from the Southern states and as well as the national anthem, the evening also started with a prayer which I’ve never heard at any other sporting event! 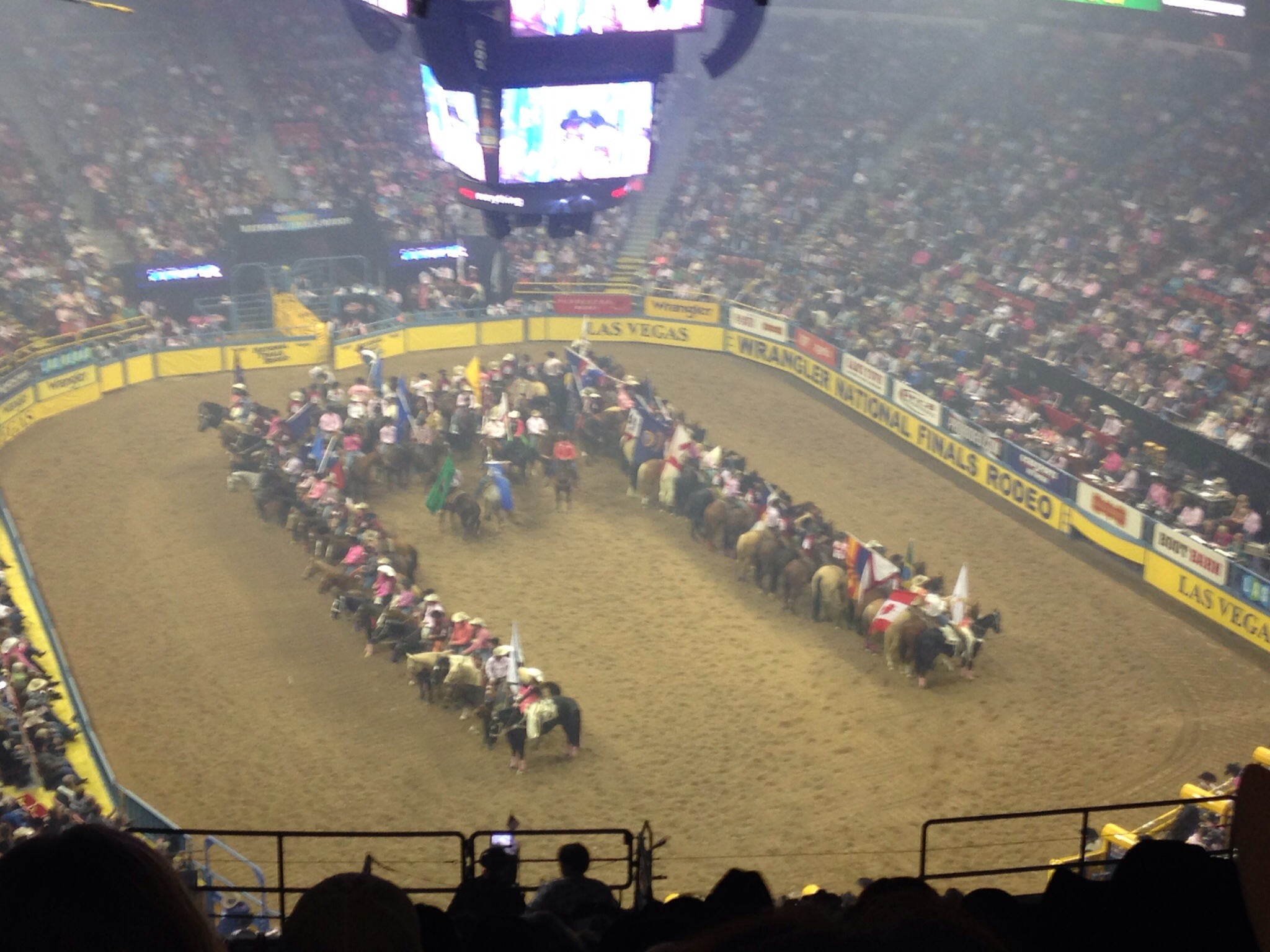 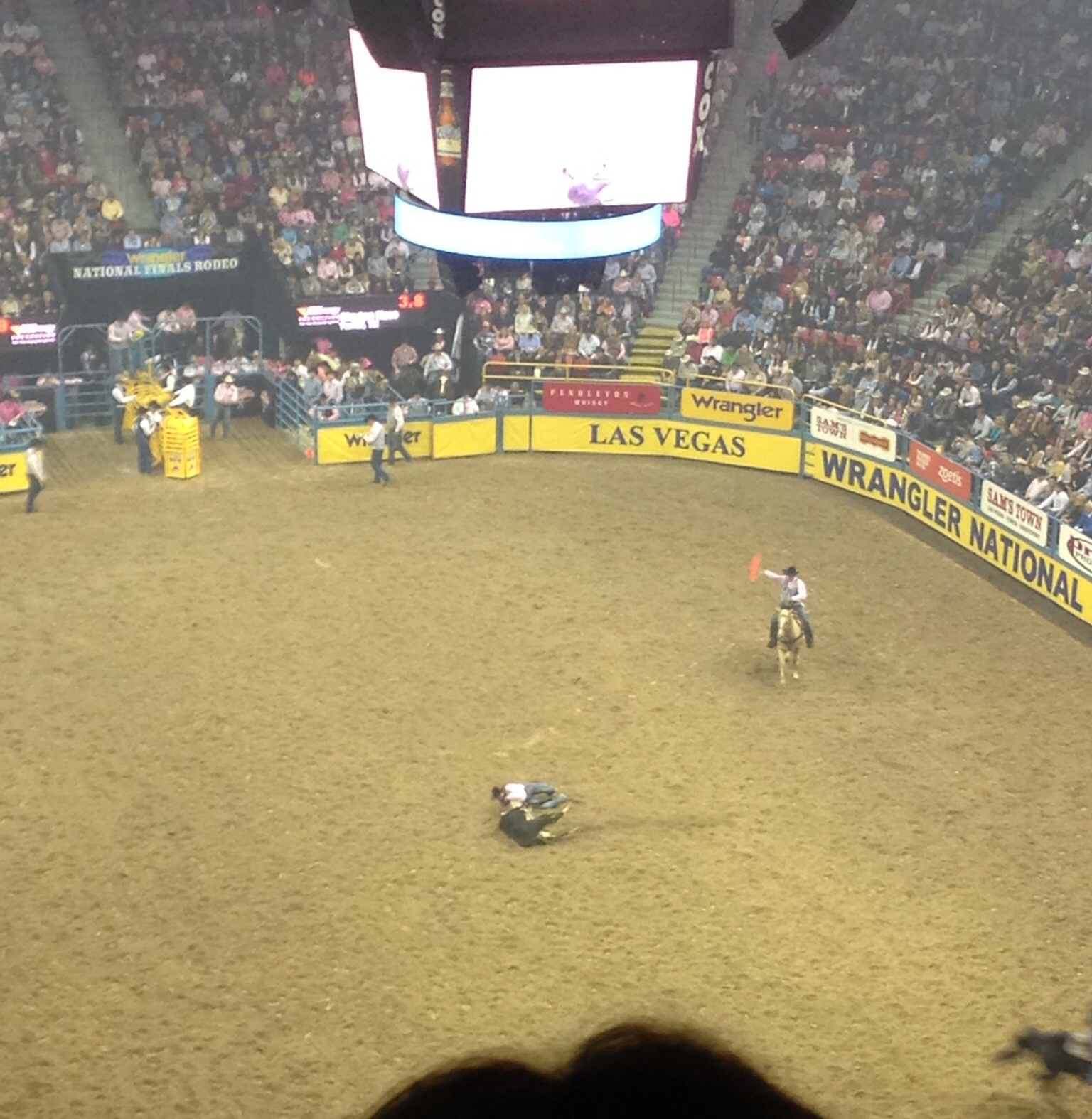 We had a lot of fun in Vegas which is lucky as we’re going back next year to mark our 30th birthdays. Even after an action packed long weekend, there were still lots of casinos, bars, shows and restaurants that we didn’t get to. Also when we go back in the spring, it should be warmer so the pools will be open and we might spend a bit more time outside. It’s not a place to visit if you want to be enjoying the great outdoors, but there’s plenty to keep you entertained on any budget even if you’re not a big gambler.