Having partied hard on Koh Phangan we headed to Koh Samui for a few days of relaxation. We stayed in a two bed villa with a plunge pool that was perfect to just jump into first thing in the morning! We decided to travel in style between the two islands and split the cost of a speed boat between the four of us which meant we got to leave when we wanted and the journey was much quicker!

We stayed in a pretty quiet part of the island, near Plai Laem beach. There wasn’t much around but we were walking distance from a few restaurants and convenience stores which was all we needed for our chill time! On the first night we ate at Big Buddha cafe (BBC) which was run by a Kiwi and his Thai wife so dished up a good mix of western and Thai dishes. For desert, he popped to the shop to buy a plain magnum for me as he only had nutty ones in stock – excellent service! The second night we had a BBQ in our villa which inevitably ended up in us all eating much more meat than necessary and not really moving for the rest of the night.

The beach was about 50m from the apartment. It was not good for swimming but that meant it was pretty empty and was a great spot to watch the sunset from. Katy and I sat to watch it in the beach one evening with a couple of cocktails and saw only 3 other people on the beach – very peaceful. 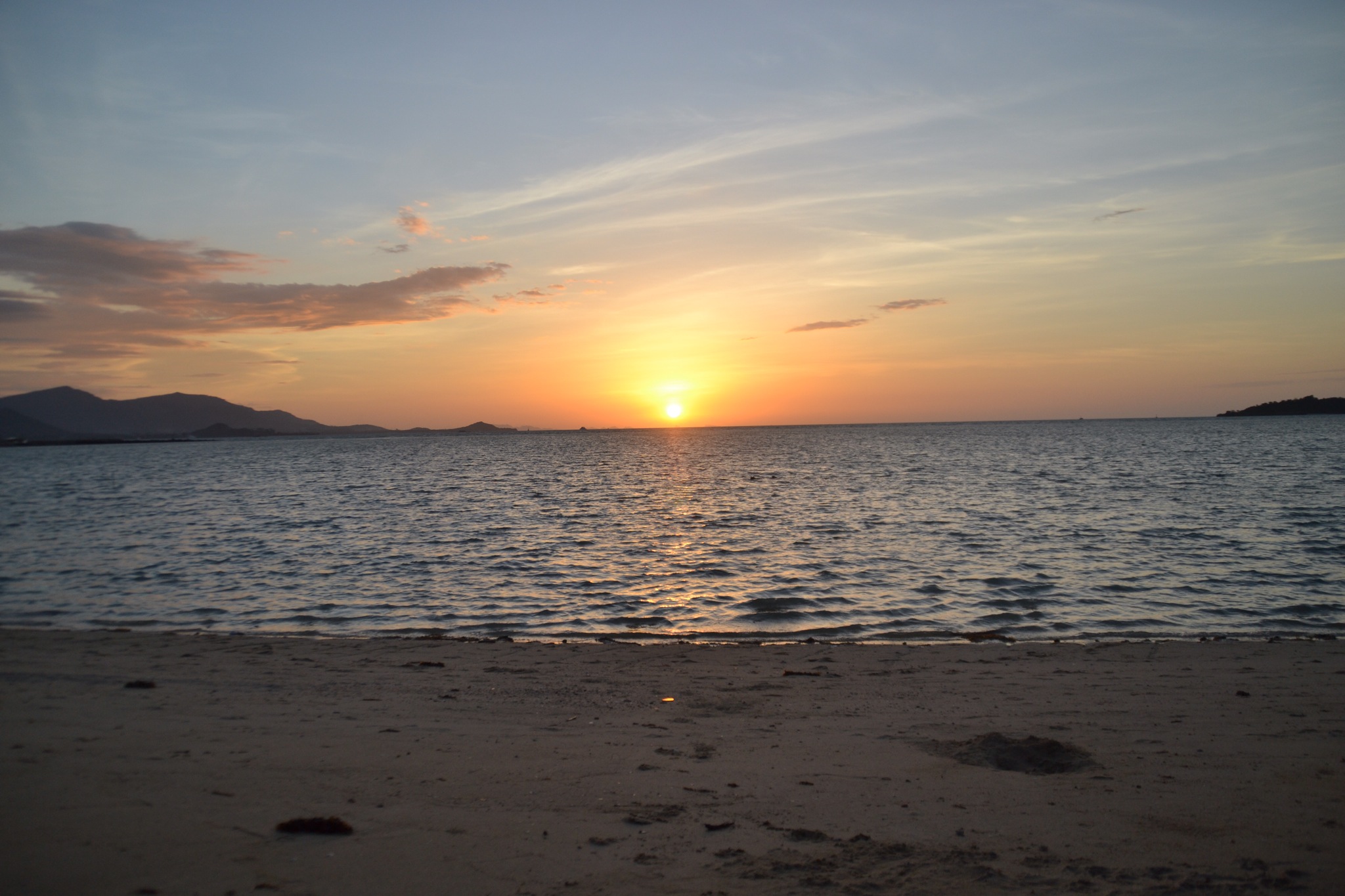 Aside from lounging in and around the pool, on the third evening we went to the beach cinema at Nikki beach resort. We didn’t know what film would be showing but figured it would be fun to go anyway. As it was the day after Robin Williams’ death, we guessed it might be one of his films and we were right – it was Popeye which only Dean had seen before. This was one of the weirdest films I’ve ever seen! The food was great though and luckily the weather stayed dry although towards the end of the film some pretty strong winds started blowing which had us worried a storm was on it’s way. 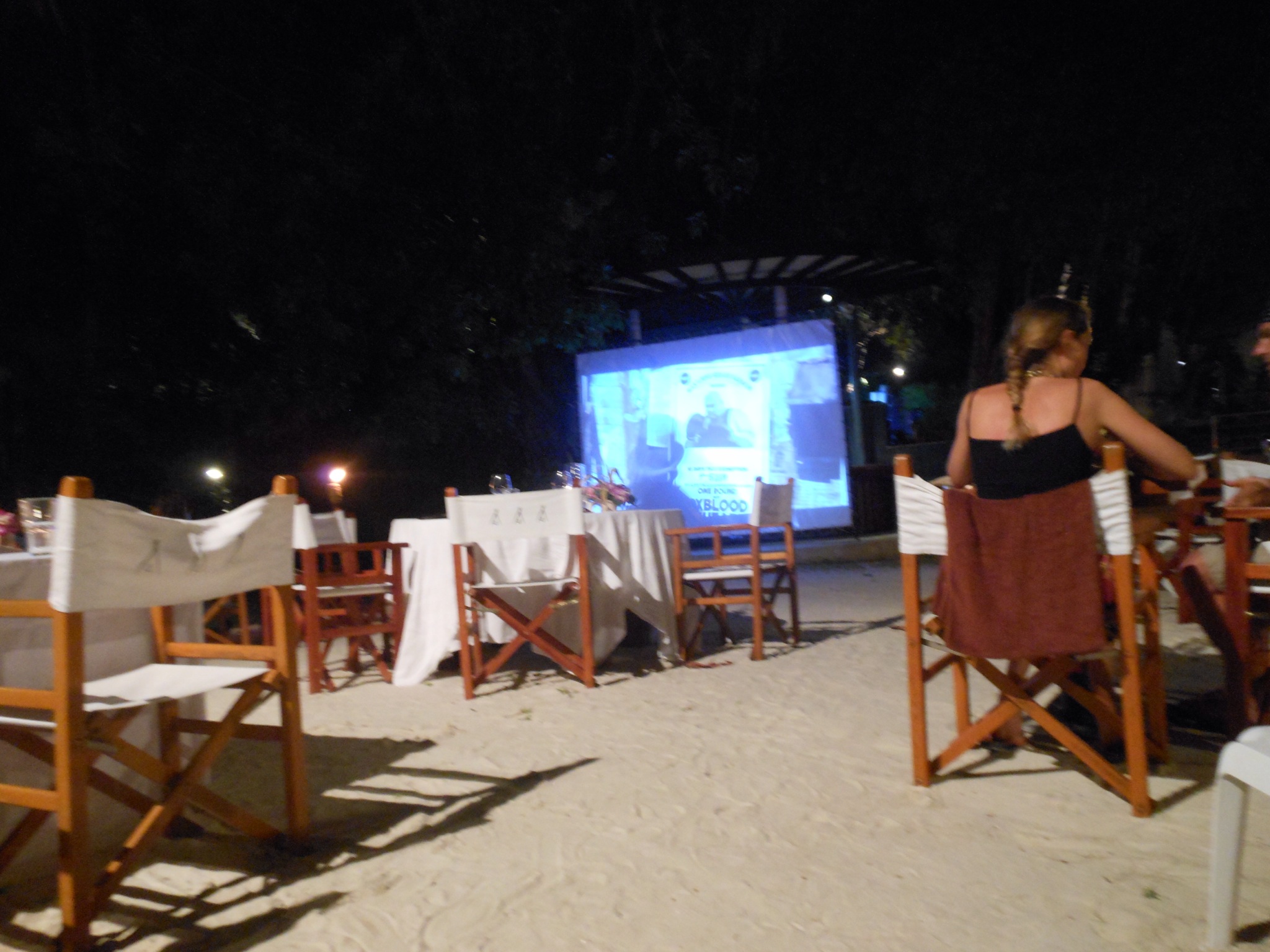 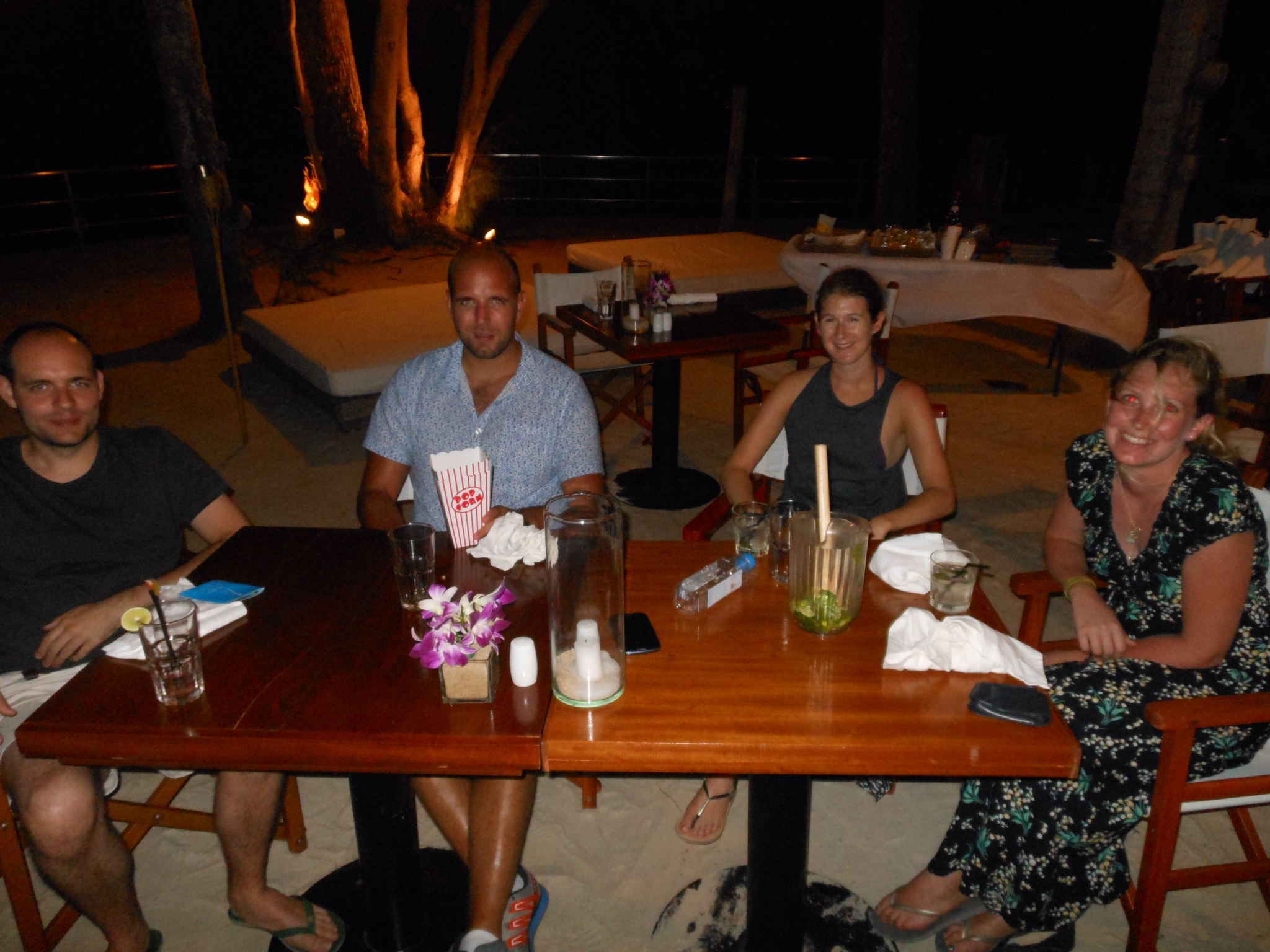 The next day Katy, Mike and I (Dean had the lurgey) took a trip to Angthong marine park for some kayaking and snorkelling. The first stop was the emerald lagoon from where we kayaked round to another beach for a swim. After lunch we headed to the snorkelling site. When we arrived, we weren’t too optimistic – there was quite a small area roped off by the beach and there were loads of people already there! In the roped off section we saw a few fish but we ended up being rebellious and going past the rope where we saw more coral, sea cucumbers, fish and Katy saw a pufferfish. Once back on the boat, a few people jumped off into the sea to have a last swim before we headed back. There were a lot more people on the trip than we’d anticipated which meant that everything during the day took a lot longer than necessary but I’m glad I went to see it. 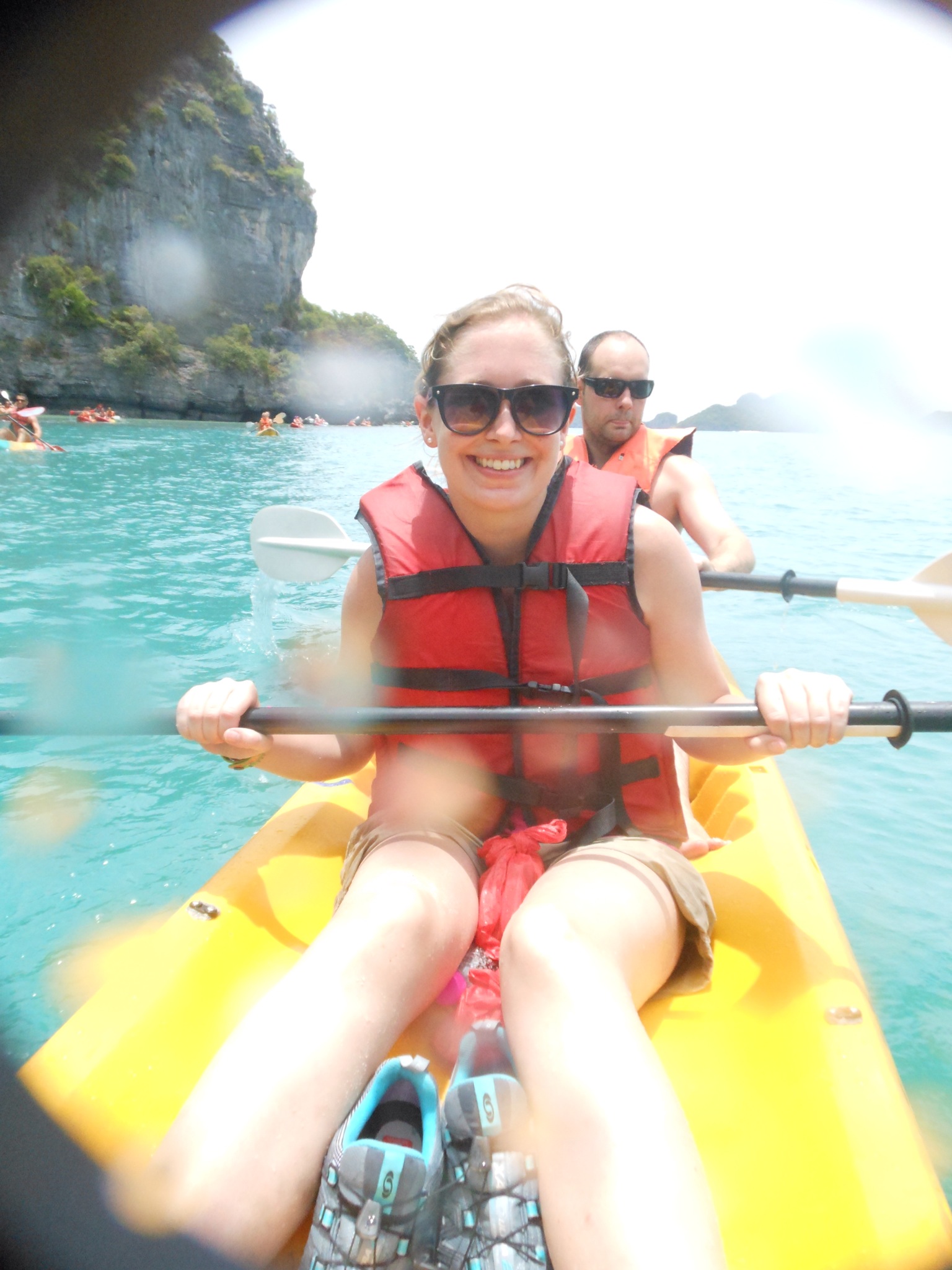 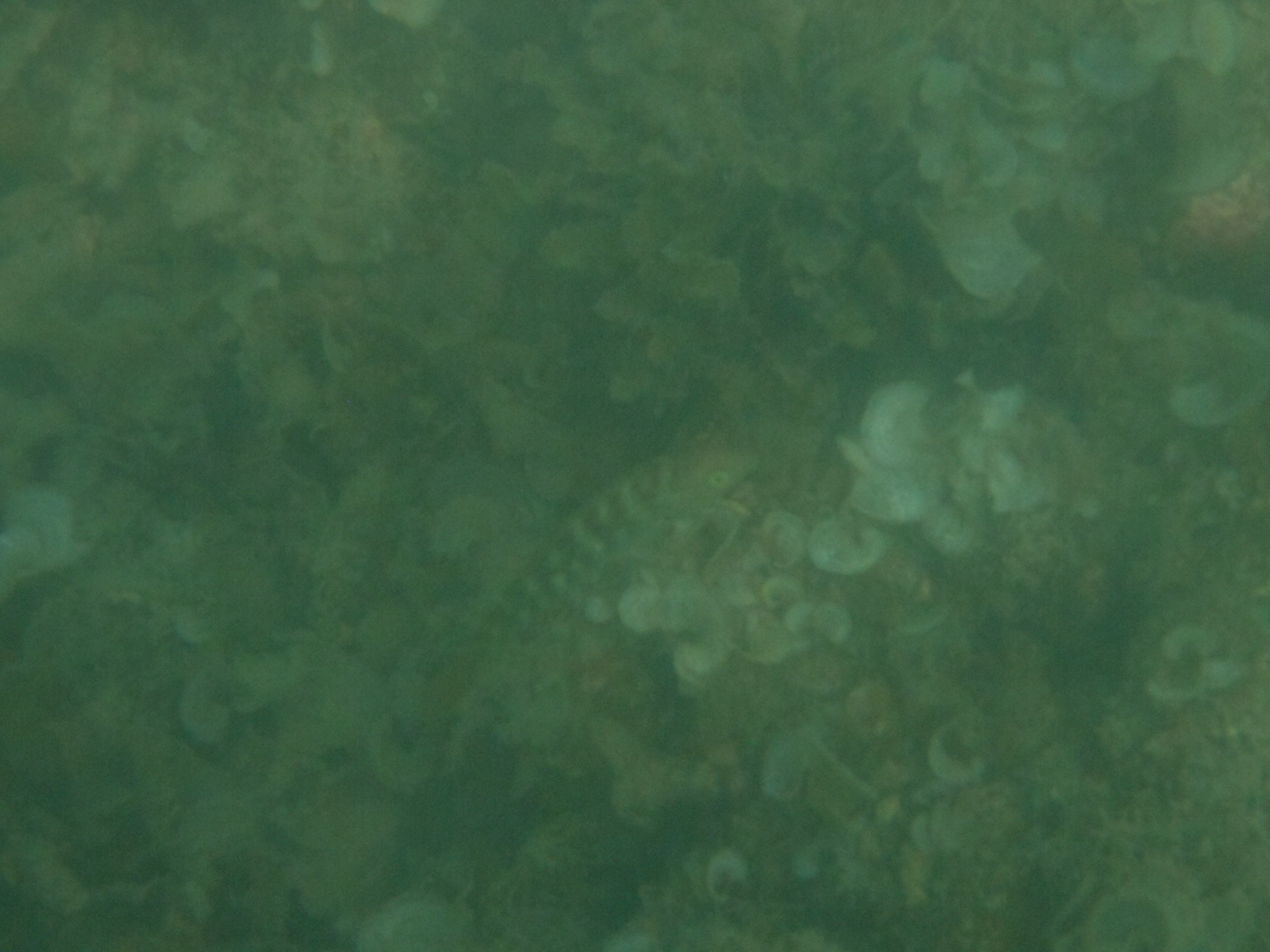 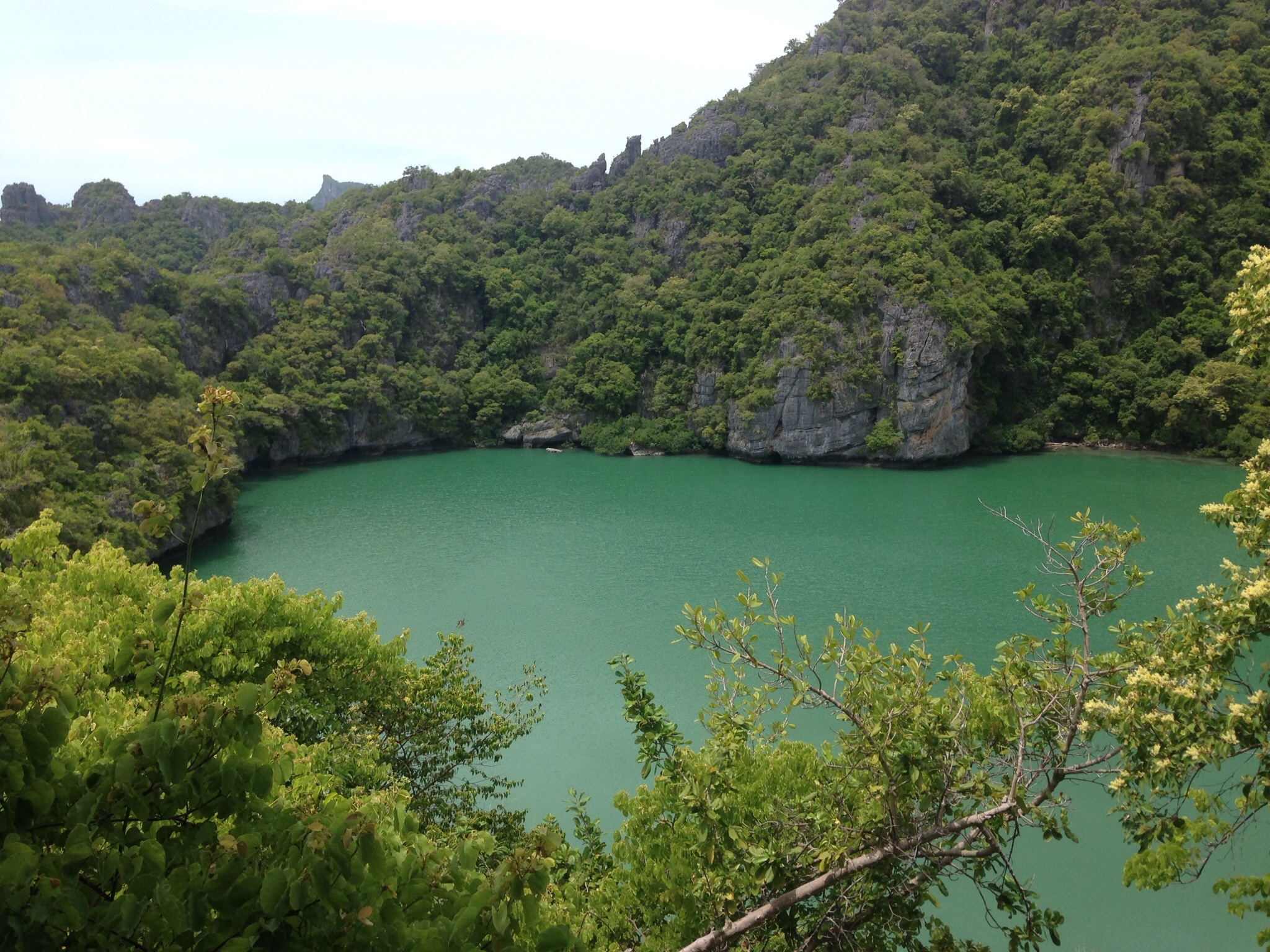 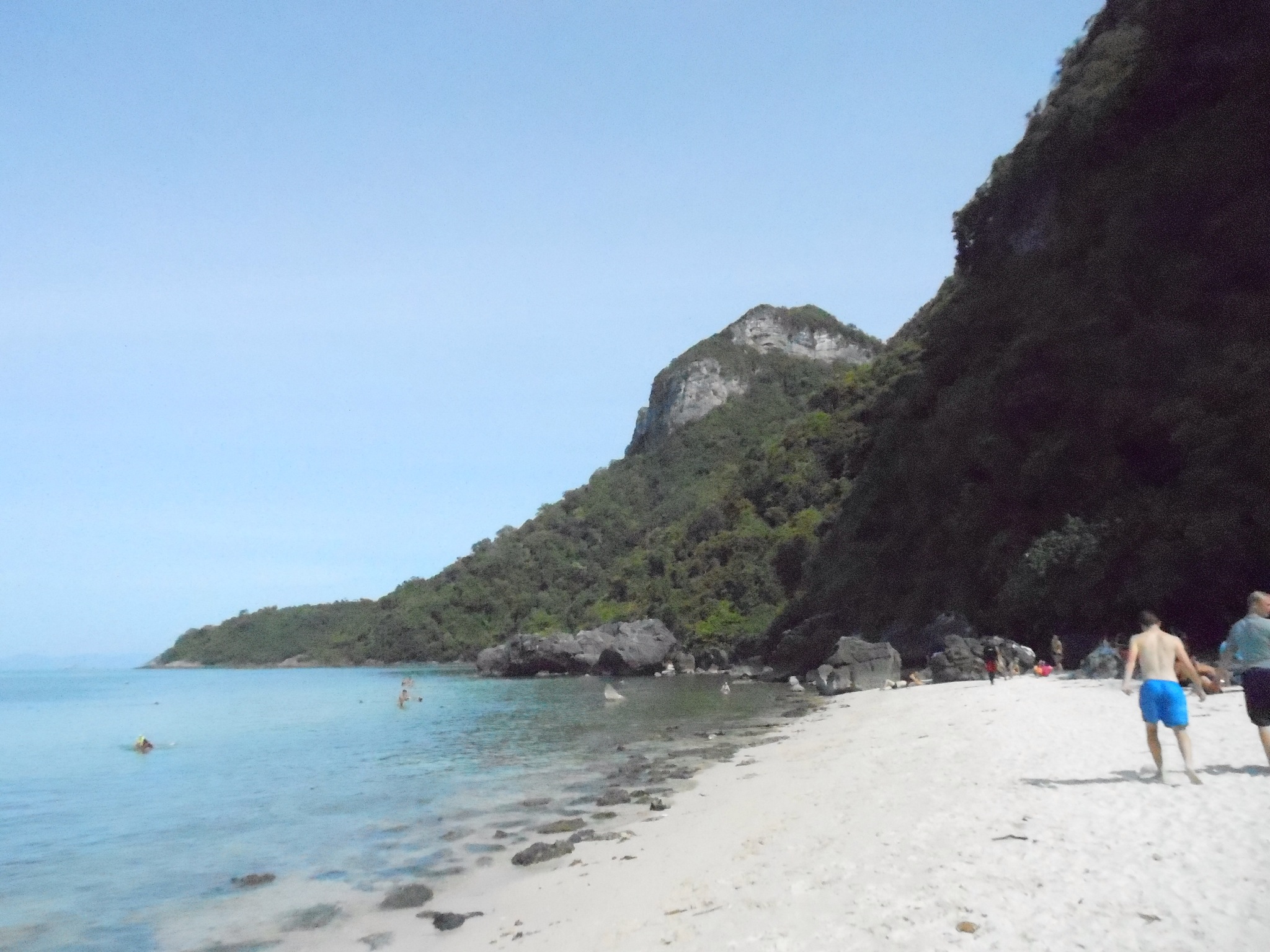 After our day trip, we went to the main tourist strip of Chaweng for dinner. There were a lot of BBQ restaurants so we went for one of these for some simple BBQ’d meat and fish. After that we found a cocktail stand disguised as a London bus – number 89 as all drinks were 89 baht. 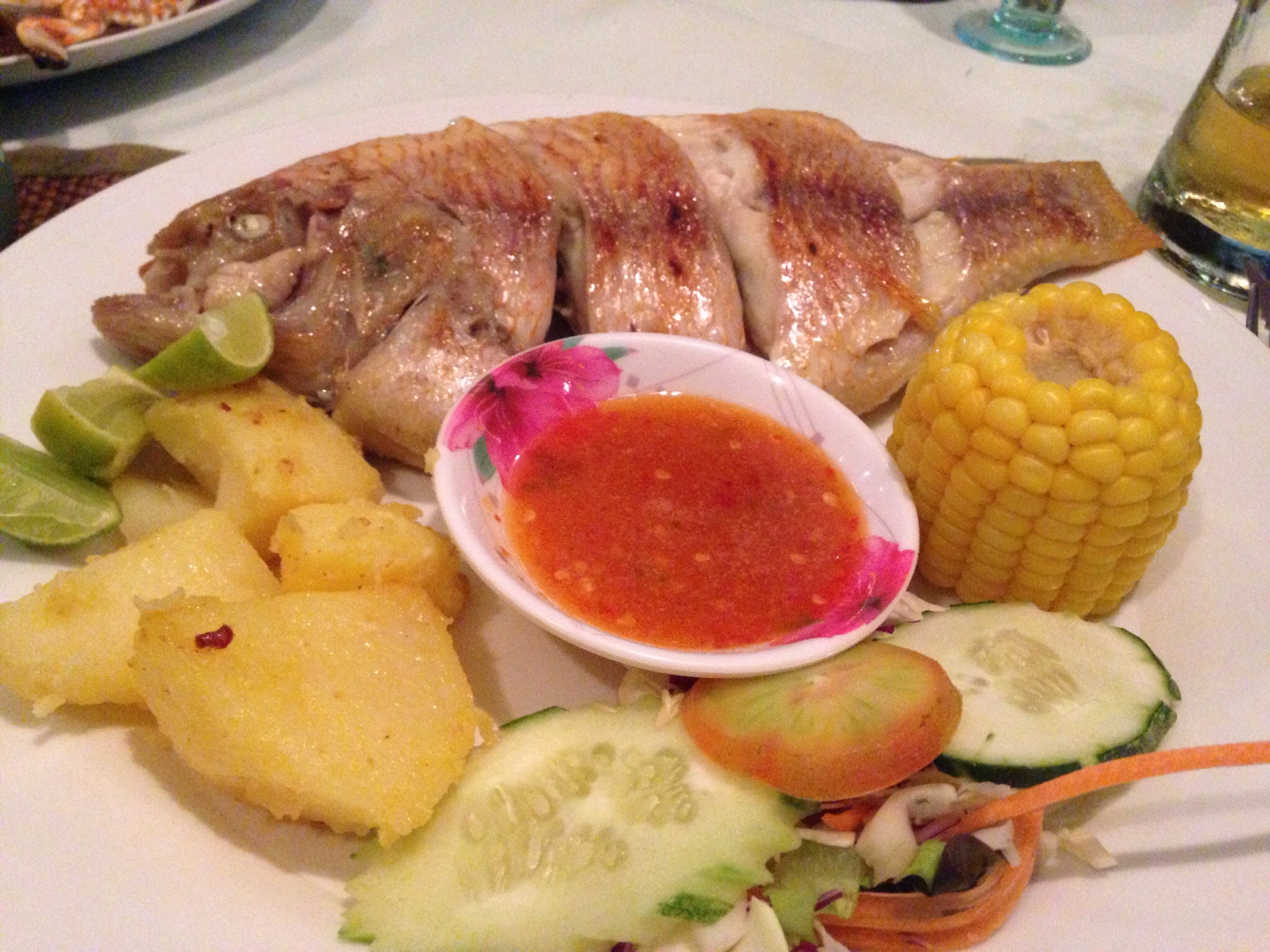 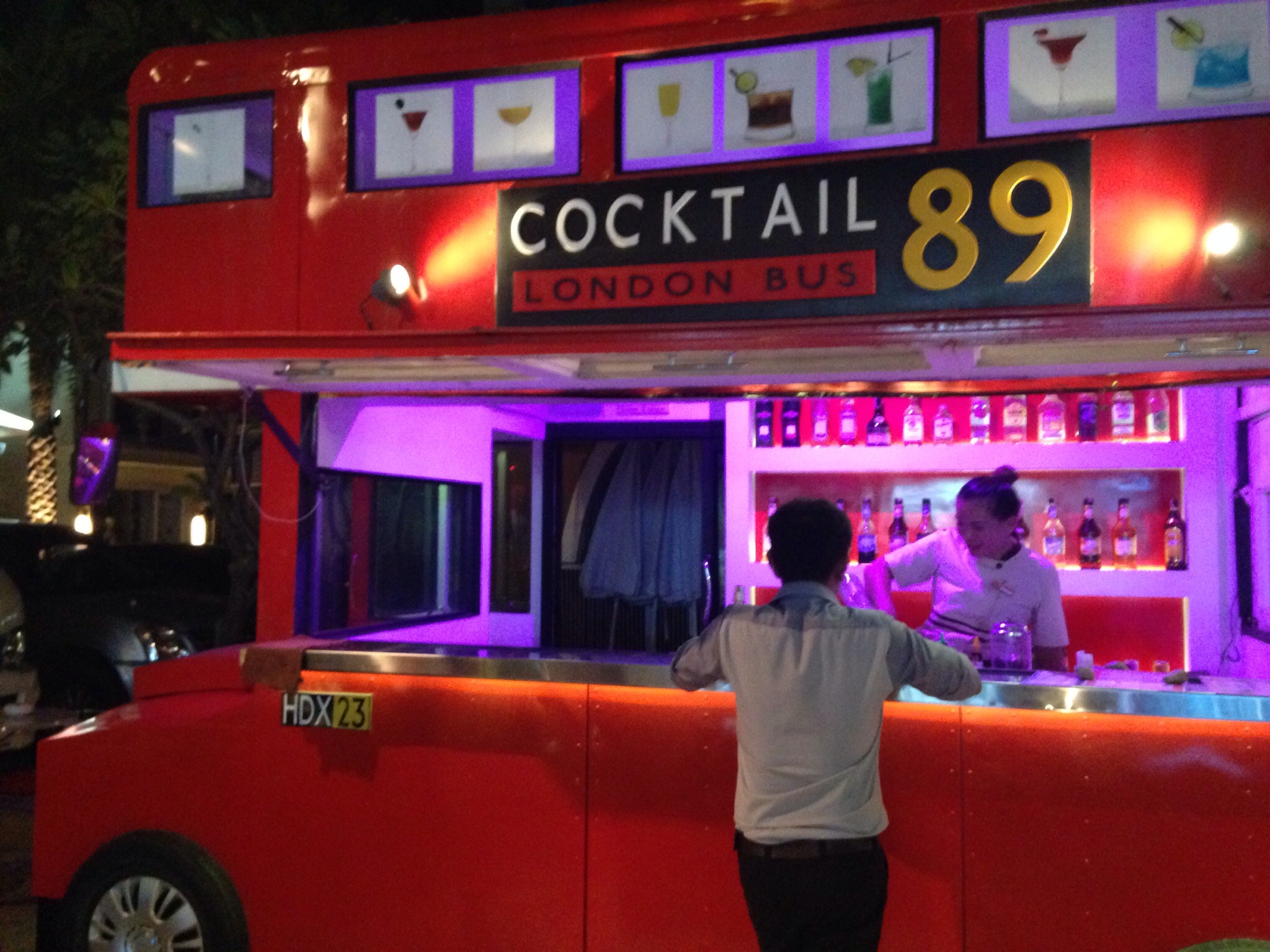 The next day we said goodbye to Katy and Mike who were off to China and moved to a different hotel in Chaweng. We spent a few more days doing lots of reading by the pool and watching the first weekend of the premier league. One bar we found ourselves at had some guys making ice sculptures. It was pretty impressive to watch a block of ice transform into a seahorse. We took a kayak out one day to make up for the day of kayaking Dean had missed previously. On the last night we went for a nice meal at a gastro style pub called The Larder. We guess it was run by an English person as the dishes were very English. We ordered a side of Stilton mash which is definitely something I will be recreating at home! 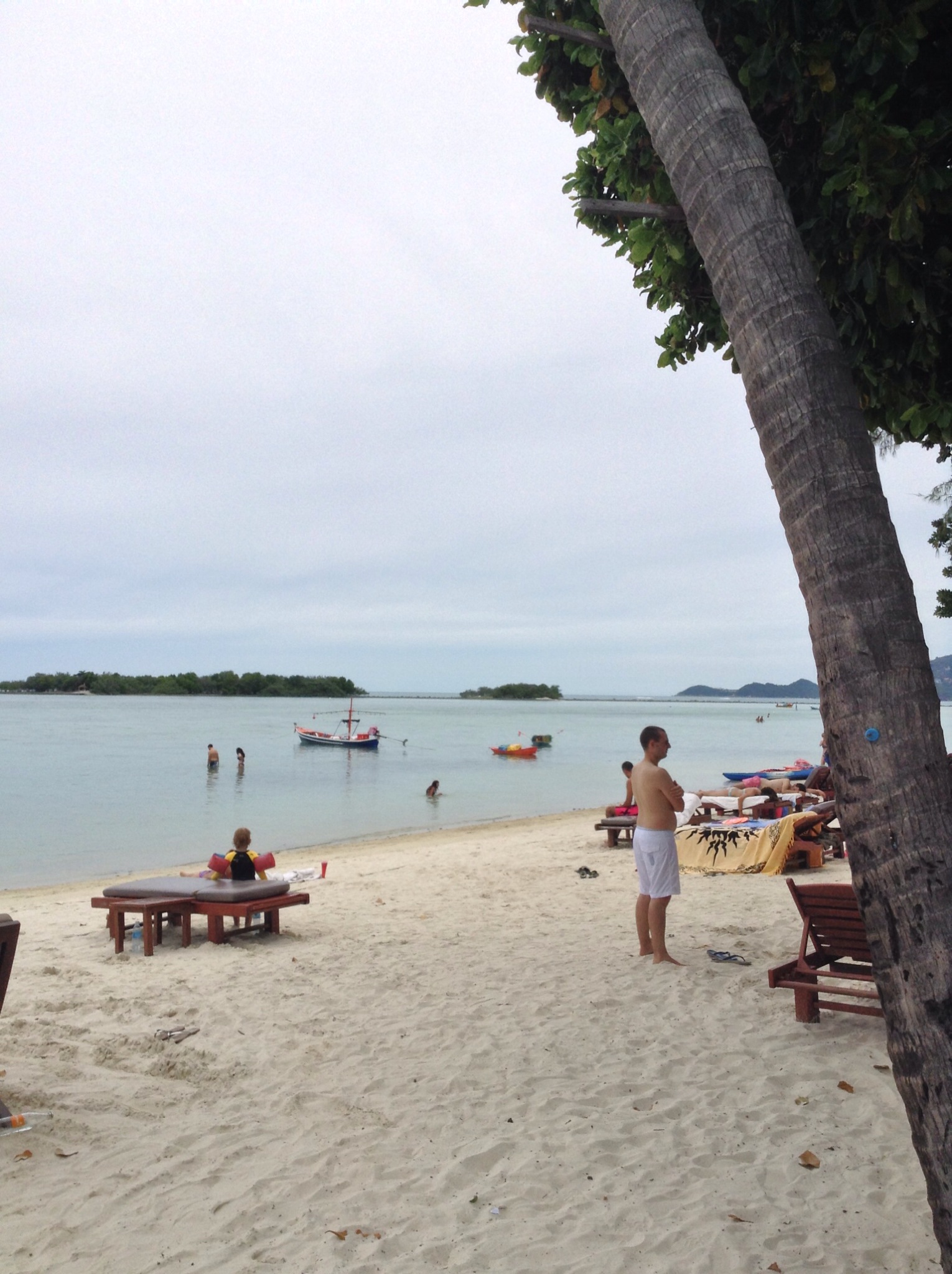