Thailand’s Gulf islands, Koh Samui, Koh Phangan and Koh Tao, each bring to mind a different type of tourist, those on package holidays, partying backpackers and scuba divers. We fit none of those categories but found there is more to each of these islands than first expected. Having previously visited Koh Phangan and Koh Samui as part of our round the world trip in 2014, we were excited to revisit them both again on a 10 day escape to the sun in March, as well as to visit their smaller neighbour Koh Tao.

Following a 24 hour journey (involving 4 flights – the background of which I think deserves its own post) we arrived at The Coast Resort in Haad Rin. We stayed here on our last trip and found it to be the perfect hotel for us. While Haad Rin beach is not the place to go for peace and quiet, just around the headland, the South facing beach where the Coast is located is very relaxed while still being walking distance from all the action. Haad Rin is best known for the Full Moon parties that take place once a month, however outside of this time, the beach is just a relaxed place to sit with a beer and watch a fire show in the evening. As it gets closer to full moon, the party starts to ramp up as the revelers arrive on the island. 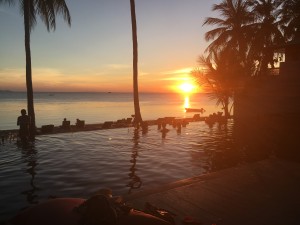 Having previously not explored much more of the island, I was determined to see somewhere other than Haad Rin and the main town of Thong Sala. We decided to spend a day up at Mae Haad, in the far North West of the island. Supposedly, this is where the best snorkeling on the island can be found. The beach definitely had a much more laid back feel here, it was even possible to get a Thai massage right on the beach for the bargain price of 250 baht for an hour (about £5). Mae Haad beach is connected to the small island of Ko Ma by a sandbank at low tide although its also very easy to swim across. Snorkels on, as soon as we stepped into the clear waters immediately in front of the beach, we were very happy to see lots of fish, a good sign for the afternoon ahead. I decided to swim across to Ko Ma (although the sandbank was visible, it was a bit rocky and very hot so flip flops were definitely needed!) After swimming over quite a bit of seaweed, I made it out to the coral – it’s easy to spot where the best snorkeling is as you’ll see the day trip boats in the area. At the time I went, the water was quite shallow which meant the visibility was excellent, but made it tricky when I wanted to clear my mask or snorkel as I would have to swim over to a coral free spot to stand up. I have to say compared to the snorkeling I’ve experienced in Malaysia and Indonesia, this wasn’t on the same scale, but was definitely good enough to make it worth the day trip – not something I had expected on Koh Phangan. One thing to bear in mind if you are visiting Mae Haad just for a day is transport. At this far corner of the island, taxis are few and far between. Having gotten used to jumping in a passing songthaew during the rest of our time in Koh Phangan, it took us by surprise that we couldn’t do that here. Both of the hotels on the beach will be able to organise a lift for you, but be prepared to wait as they each only have one car which might already have just left to the other side of the island. Another option is to arrange a pick up time with the driver who drops you off. We had the option and declined at the time which we really regretted when we were just ready to go home but had to wait around for 40 minutes. 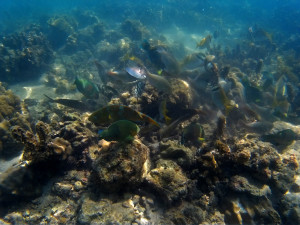 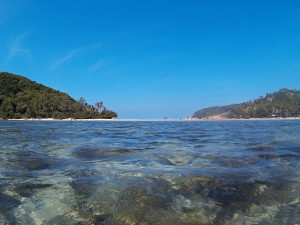 Another Koh Phangan highlight on my list was to watch the sunset from the West Coast. The most popular place for this is Amstardam Bar. We made it only just in time for the sunset, but this also meant we had a very beautiful taxi ride on the way. It was pretty busy by the time we got up there but we found that a lot of people were already leaving after “peak” sunset so we managed to get front row seats to see the last of the sun disappear behind the horizon. The next couple of nights we watched the sunset from the pool of Coast resort and I have to say that might be my favourite spot on Koh Phangan. 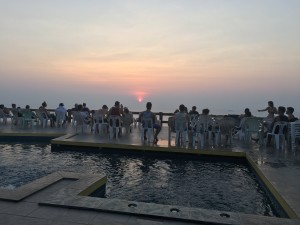 After Koh Phangan, we headed to Koh Tao. Koh Tao is best known for being a mecca for scuba divers and has some of the best scuba diving in Thailand. Unfortunately due to my asthma, I’m not allowed to scuba dive, but I love snorkeling and aside from that Koh Tao has plenty to offer, so much so that by the time we left it had overtaken Koh Phangan as my favourite Thai island. The first surprise was the accommodation available. We stayed at Naroua Villas and had a 3 bedroom villa between four of us. With the four of us it worked out at £100 per couple per night, for a beautiful villa with our own pool and of course it would have been cheaper if we’d filled the place. 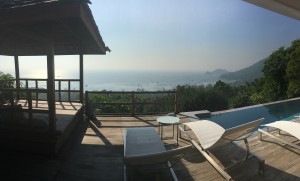 Koh Tao is basically one big hill which meant that we had to take a “taxi” back and forth to the town. This was just a pick up with some benches put in the back. Those trips were definitely the most hair-raising car journeys I’ve ever been on due to the steepness of the roads! The main town of Sairee was a pleasant surprise. Expecting backpacker central, we were amazed by some of the restaurants and bars there. Koh Tao seems the kind of place that has a great expat community, some of whom are really serious about their food and have opened great restaurants with all sorts of cuisines. We ate at the restaurant Barracuda twice – I especially loved it as they marked all the dishes which contain nuts on the menu, something I’d never seen in Asia before which made me feel a whole lot better about the whole eating experience. The beach is also beautiful with a few relaxed bars dotted along it, perfect for cocktails. 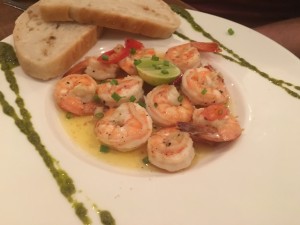 On one of the days we were on Koh Tao, we paid for a long tail boat to take us on a tour around the island, stopping off at a few beaches and snorkeling spots. We started of by heading to Koh Nang Yuan, 3 tiny islands off the coast of Koh Tao. It’s probably one of the most photographed sites in this part of Thailand. I was very excited to head here and do some snorkeling. However once we got there it was a lot busier than I expected. There’s a path to walk up a peak on one of the islands and I was so surprised that there was a queue to get to the view point!  It was completely different from the vibe on the rest of Koh Tao and I was surprised to find out that a lot of people make the trip as a day trip from Koh Samui, more than two hours each way. I think that’s such a shame as these people are really missing out on everything else that Koh Tao has to offer. The snorkeling was as expected great at Koh Nang Yuan, and once in the water, it was possible to find some peace, but it definitely didn’t end up being my favourite place we visited that day.

From there, we traveled round to Mango Bay, where we snorkeled off the shore. There were a few other snorkelers around, including one guy who attempted to point out a pufferfish to me. Unfortunately not knowing what one looks like, I had no idea which fish I was looking at, but didn’t want to appear stupid so just nodded and pretended that I could see it! There was lots to see here, but I always find it tiring snorkeling in deep water and as I’m rubbish at holding my breath, so don’t dive down, its harder to get such a good view.  Our third and final stop was my favourite. Tanote Bay has a restaurant by the beach and the coral reef is immediately off the beach. For me it was the perfect spot, I love being able to head back in mid snorkel for a mango juice and there was enough different fish and coral to see. 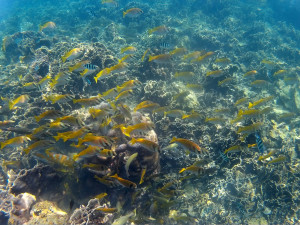 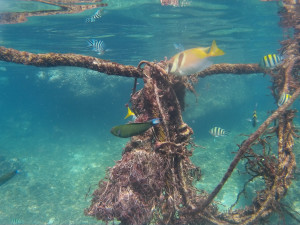 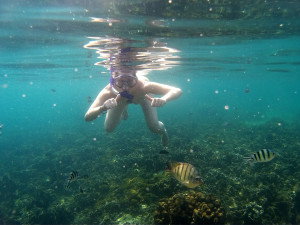 The final stop on our whirlwind tour was a two night stay on Koh Samui. We were overwhelmed by the choice of accommodation on the island, but in the end decided that as we were only there for two nights, we could afford to splurge on this one. We stayed at the Banyan Tree, a resort comprising of villas with private plunge pools, located around a private beach. Unsurprisingly I loved it! The beach itself was beautiful and they have a variety of watersports to try, paddle-boarding, snorkeling, sailing and windsurfing. I think this had to be one of my favourite hotels ever! 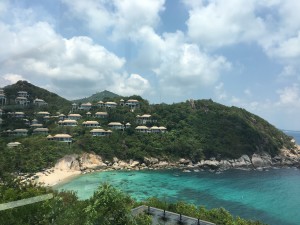 Thailand did not fail to disappoint the second time round. Some people thought that we were going to Thailand for such a short amount of time but we came back from the holiday feeling fabulously refreshed and with glowing tans to show off in the office.

Thailand we can’t wait to come back soon!