Having visited two of China’s SARs (Special Administrative Region) along with Taiwan, it was time for us to visit the mainland. We arrived in Beijing to heavy smog (extremely hazardous according to US measure, only hazardous by Beijing scale), the visibility was terrible and we later found out it had been the Beijing marathon that day! The Reuters picture below shows one of the runners. I really can’t imagine running in it! 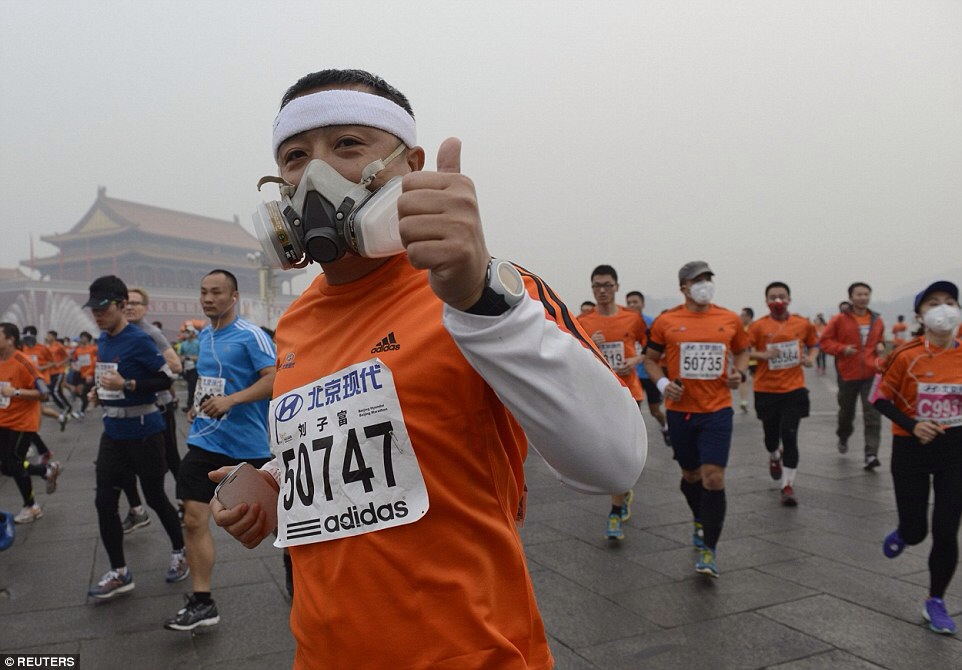 Aside from the smog, we also didn’t gave the best first impression after we completely failed to get a taxi from the airport. I’d followed all advice, printing the Chinese address, even a little map but all the official taxi drivers claimed to have no idea where it was. Their friends in unmarked taxis (probably with meters running at 4x the speed) were all too happy to help, approaching us when we were trying to show yet another official driver where we wanted to go. Seeing as our hotel was 400m from Tianneman square on the same road, we were pretty sure everyone was in on a scam the foreigners scheme! We gave up and ended up paying lots for a prepaid taxi which we had to wait quite a while for.

Well, things could only get better! First on our agenda was a 7.30am pickup to visit the Great Wall at Mutianyu. It was about a 90 minute drive to the tourist centre (complete with Burger King and subway) and then a short cable car ride to the top of the wall. Again the visibility was pretty bad so we didn’t get the best views, but it did clear up a bit during our visit. If you look closely at the smog picture below, you should be able to see the wall stretching into the distance. 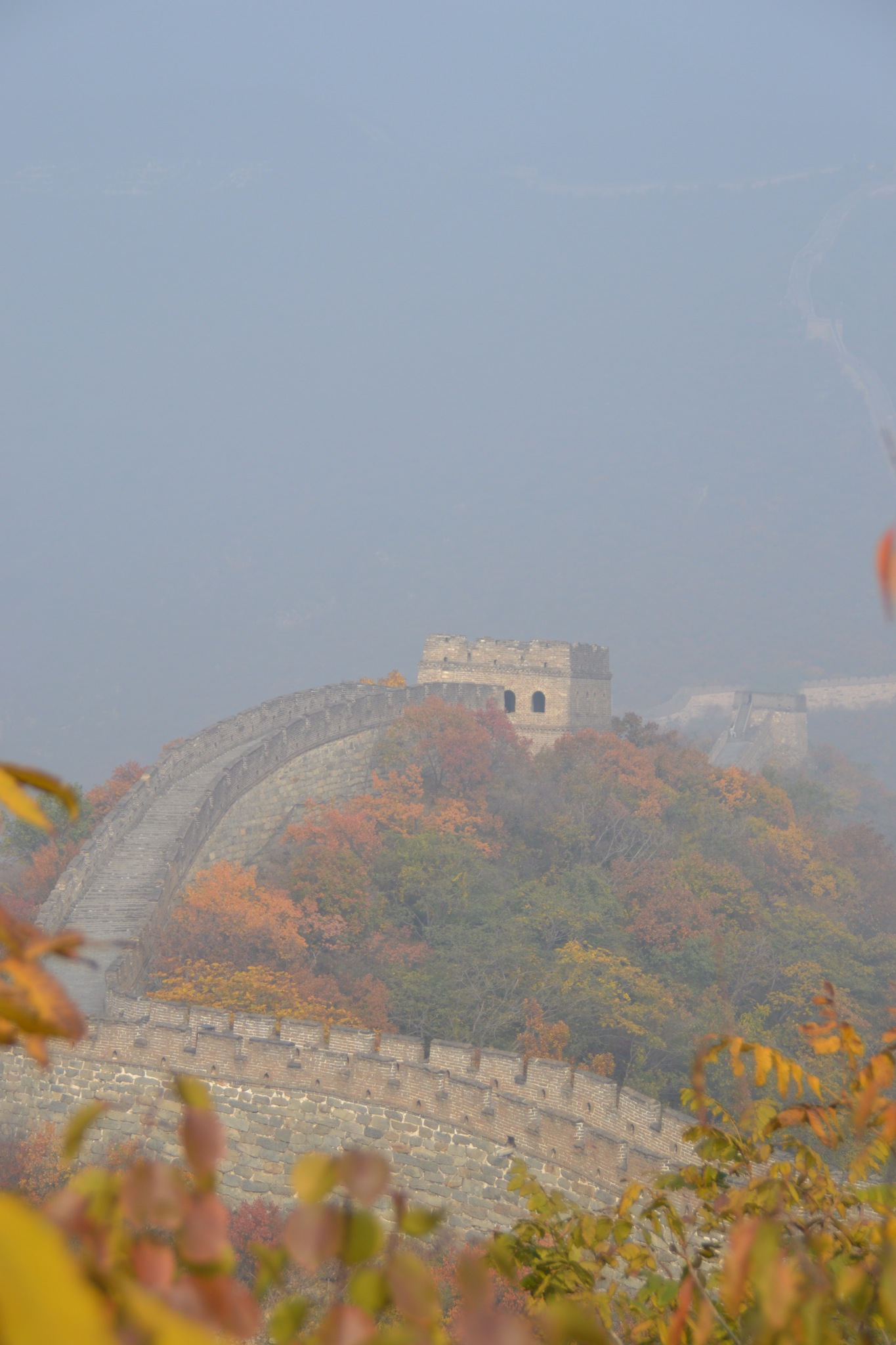 Thee are a number of towers along the wall. The cable car dropped us at tower 14 from where we walked to tower 20, then back to tower ten. The wall was very up and down. We decided to tackle the steepest part without a rest as we thought if we stopped it would be tough to start again – it was exhausting! In the end we were glad we’d gone so early as the wall got much busier later on. 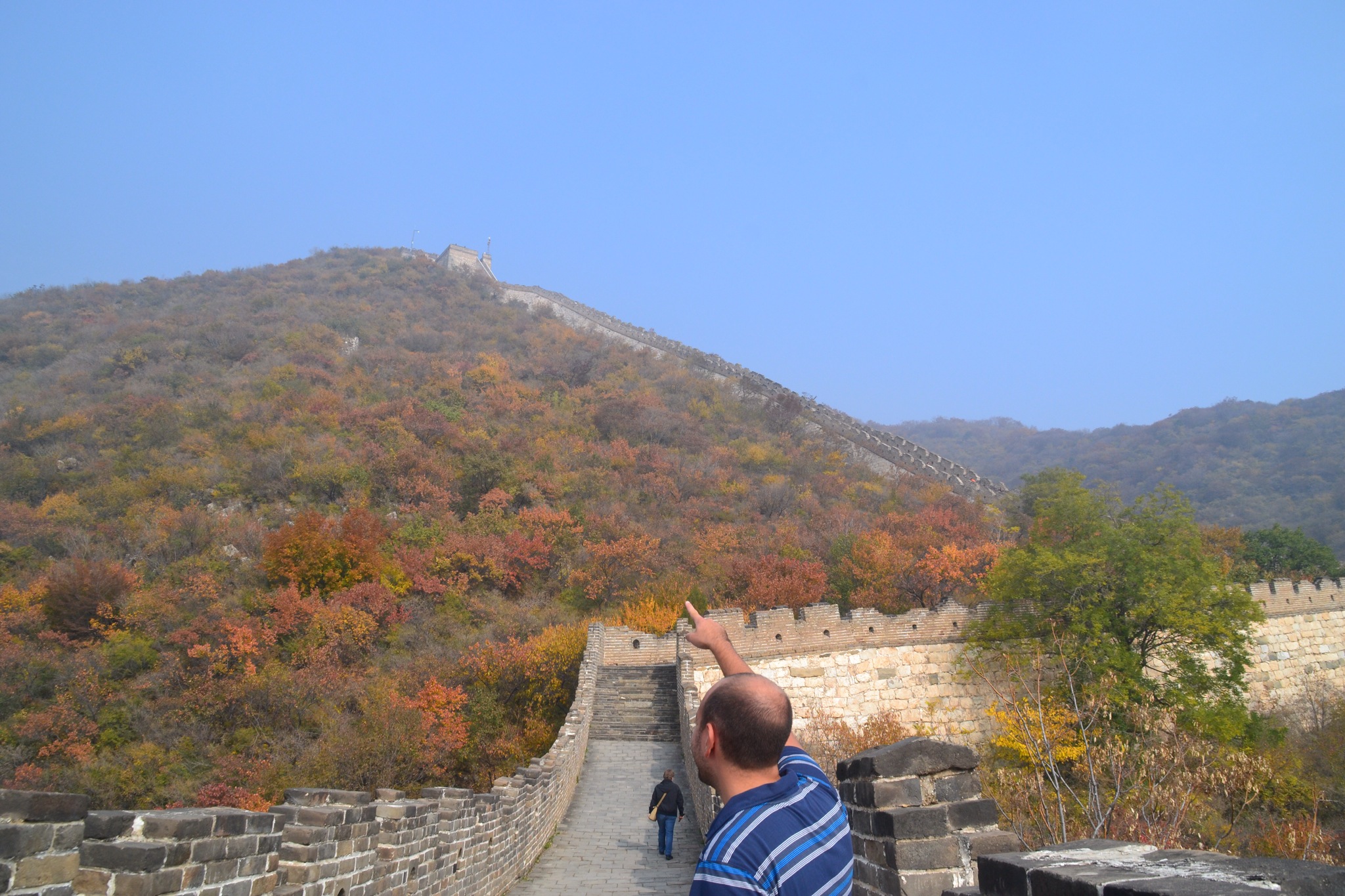 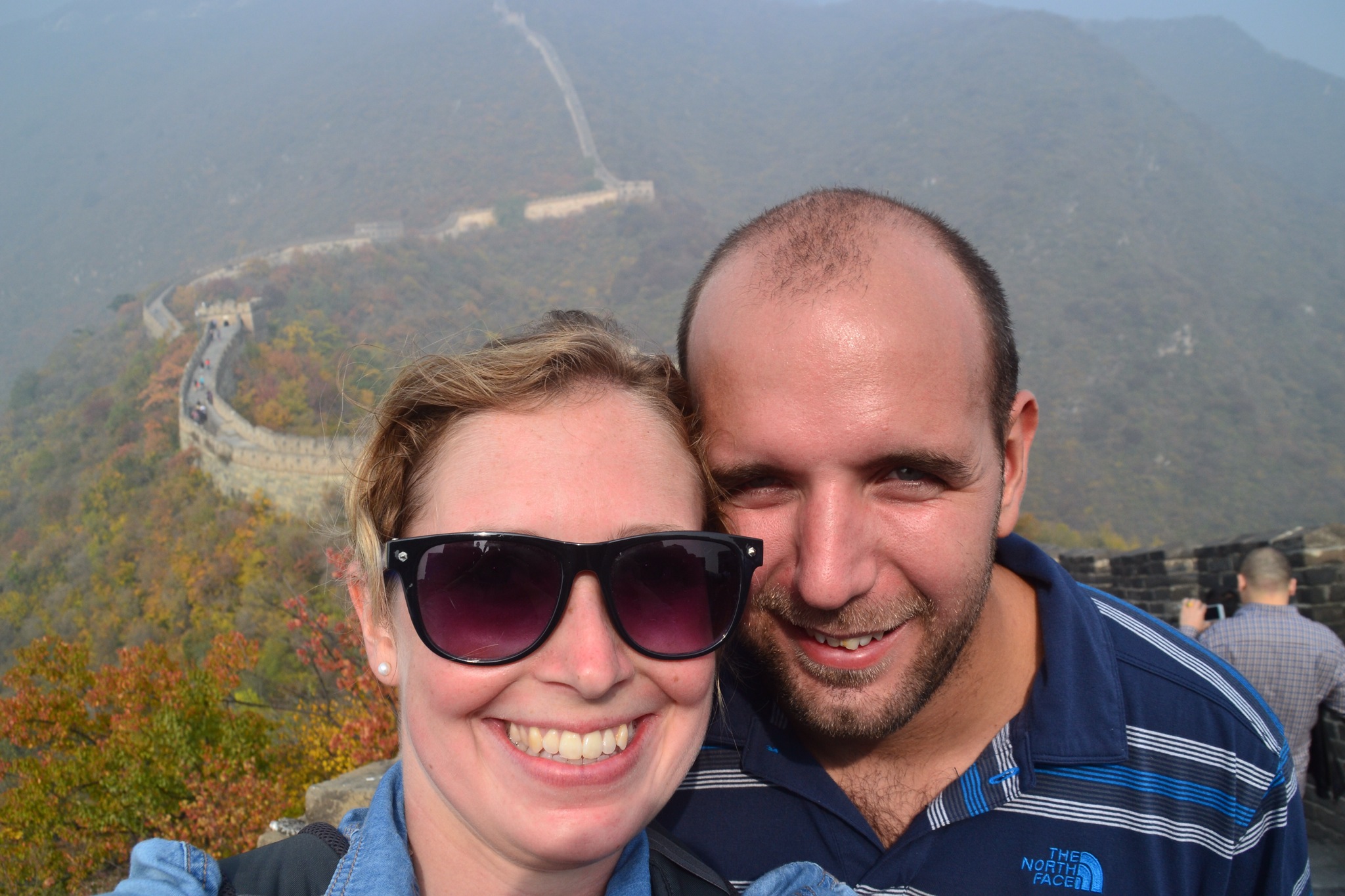 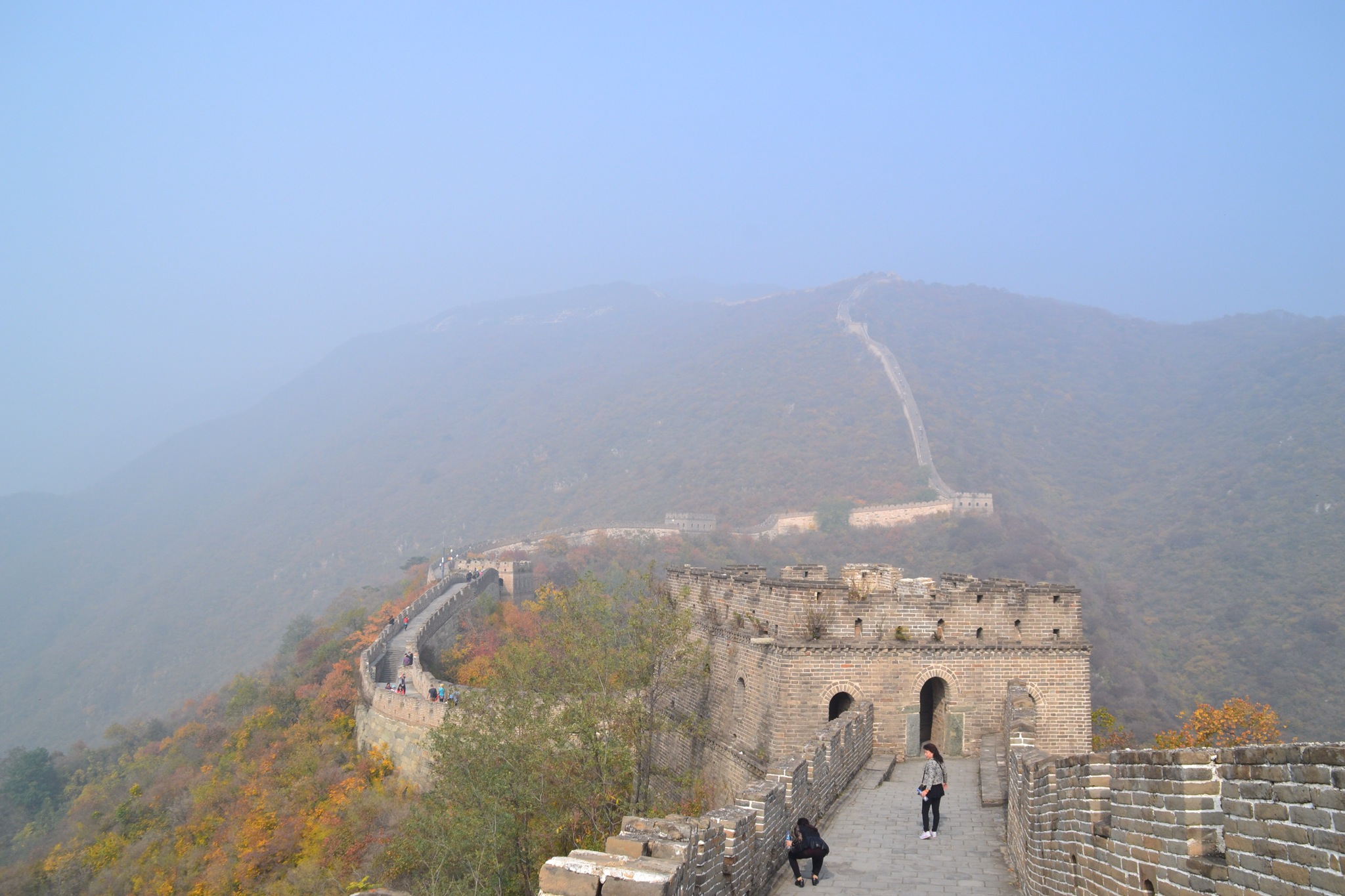 On our second day in Beijing we planned to visit the Forbidden City and Tiananmen Square. At the entrance to the square, there are airport style security scanners, and when we went, a massive queue/bundle of people. We joined it. After about ten minutes having not moved and watching a scuffle between some seemingly peaceful protestors and the police, Dean decided to head back to the hotel. I decided to brave it. An hour and a half later, I was in Tiananmen Square. The queue pretty much summed up the Chinese attitude to queuing which is basically I must get to the front no matter what, and no matter who’s around me. I miss British queues! 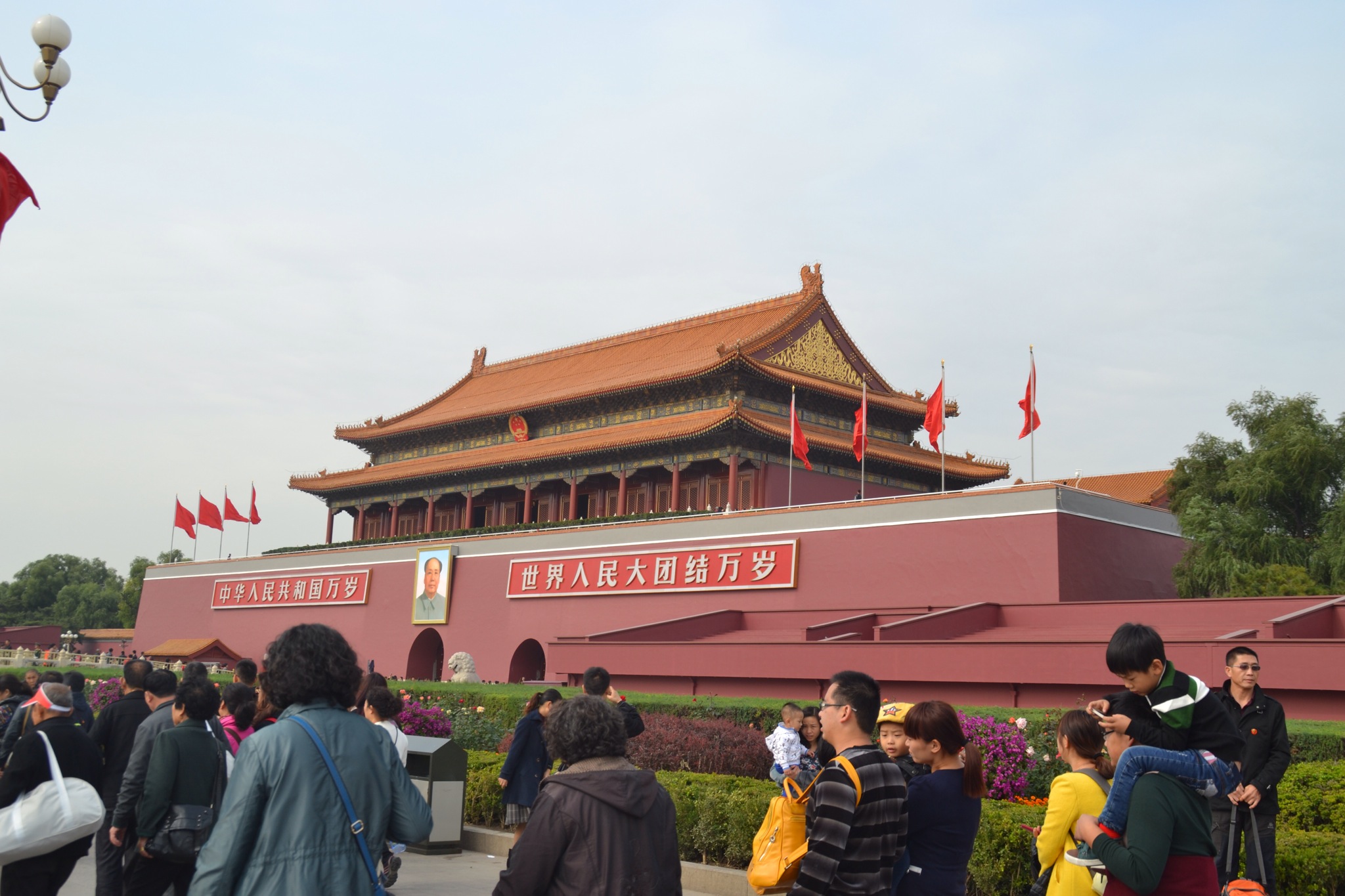 Once inside, I joined another much more civilised queue to buy my ticket for the Forbidden City. I also picked up an audio guide pretty cheaply which I was impressed that they provided. Inside, there were LOADS of tourist groups who followed the main central path through the buildings. I found it was much more peaceful to wander down the side. It meant I didn’t get to peer inside all the buildings, but when I did try, it was a big hustle of people pushing forward to take their pictures so I think I had a more enjoyable experience by steering clear of the crowds. 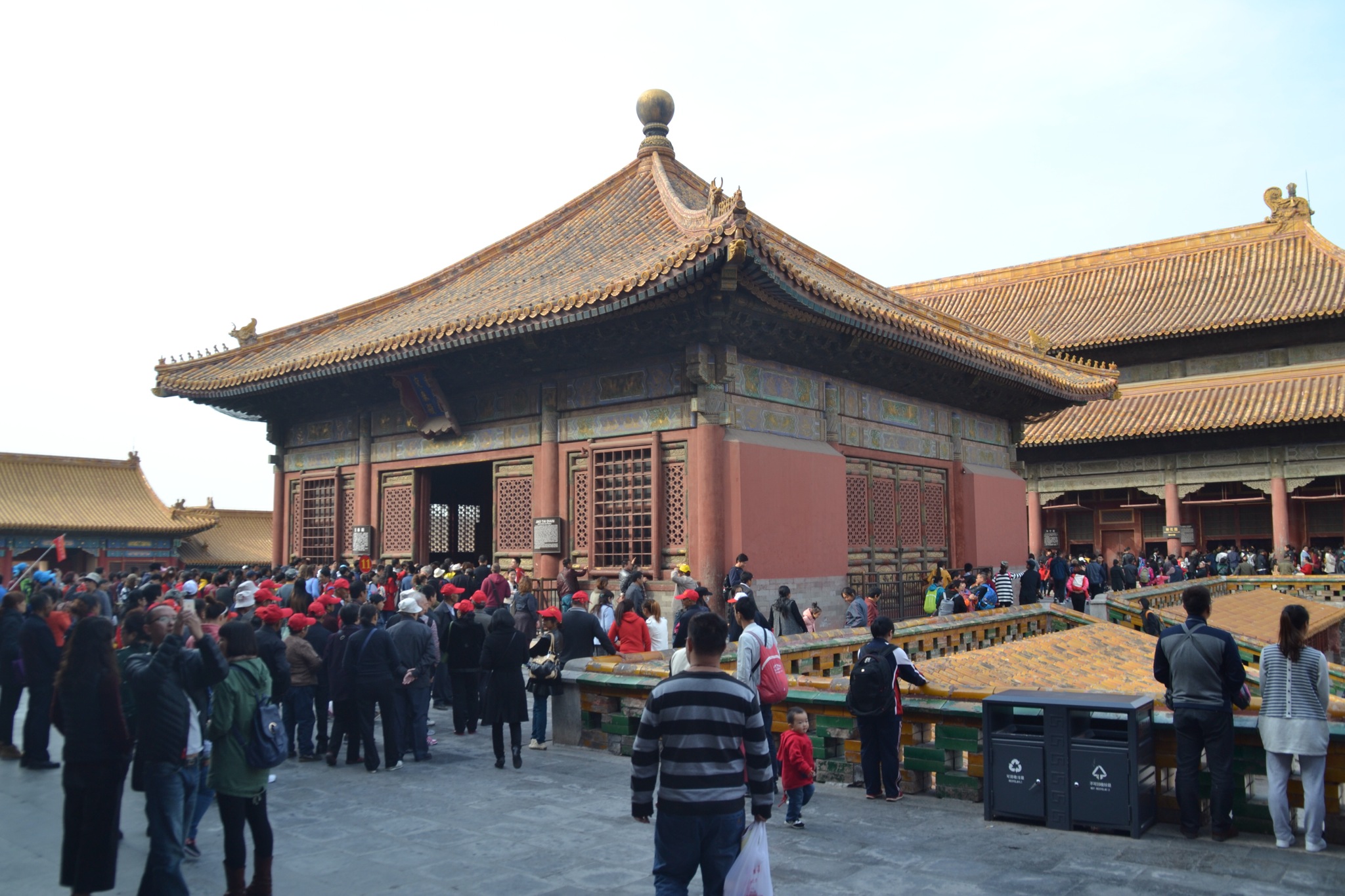 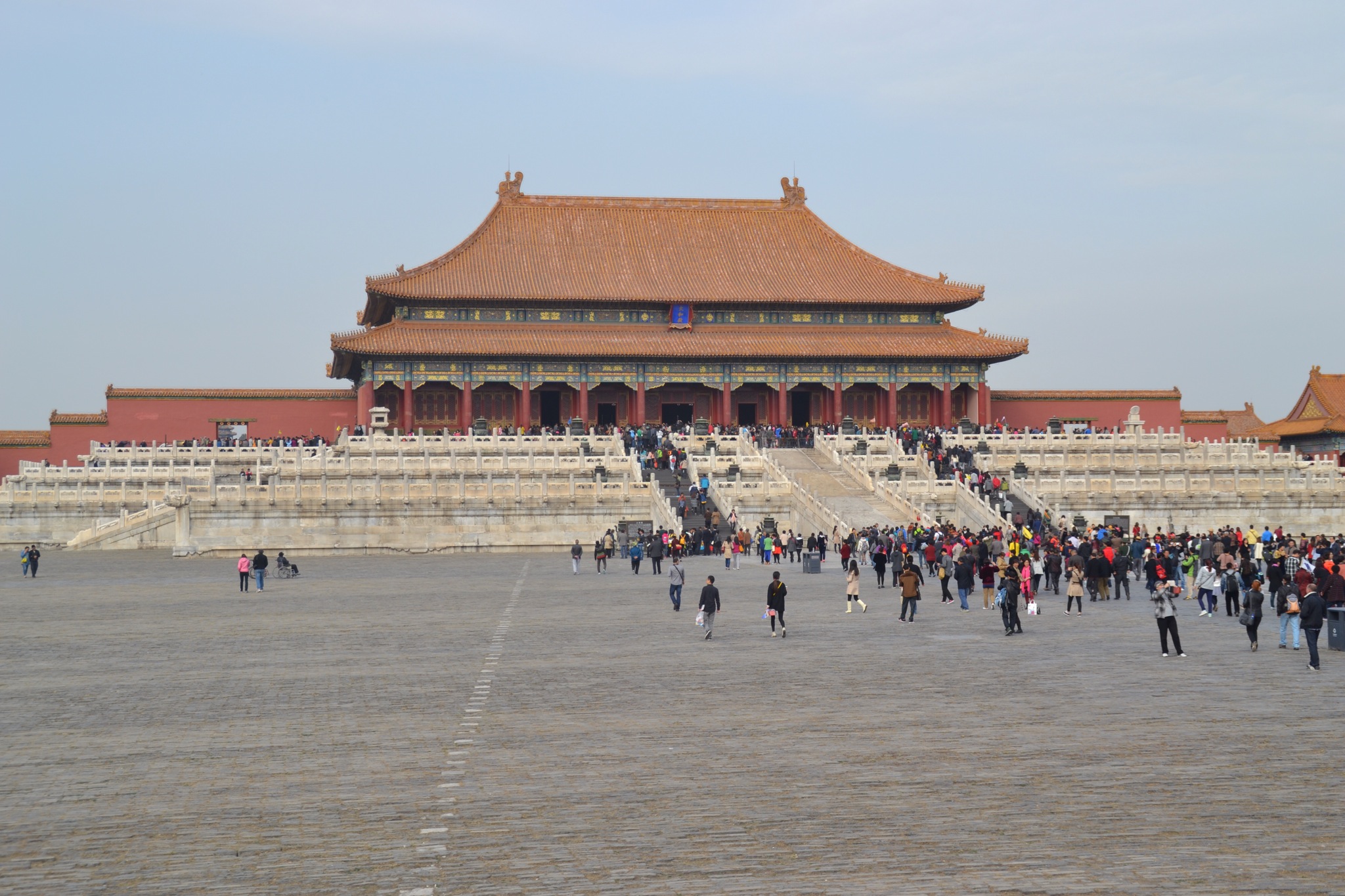 Having visited the Forbidden City, I headed over to the square. While I was there, I tried to take a ‘selfie’. A Chinese lady came and tapped me on the shoulder. I thought she might be going to offer to take the picture for me (with my phone) but instead just wanted a picture of me on her camera! 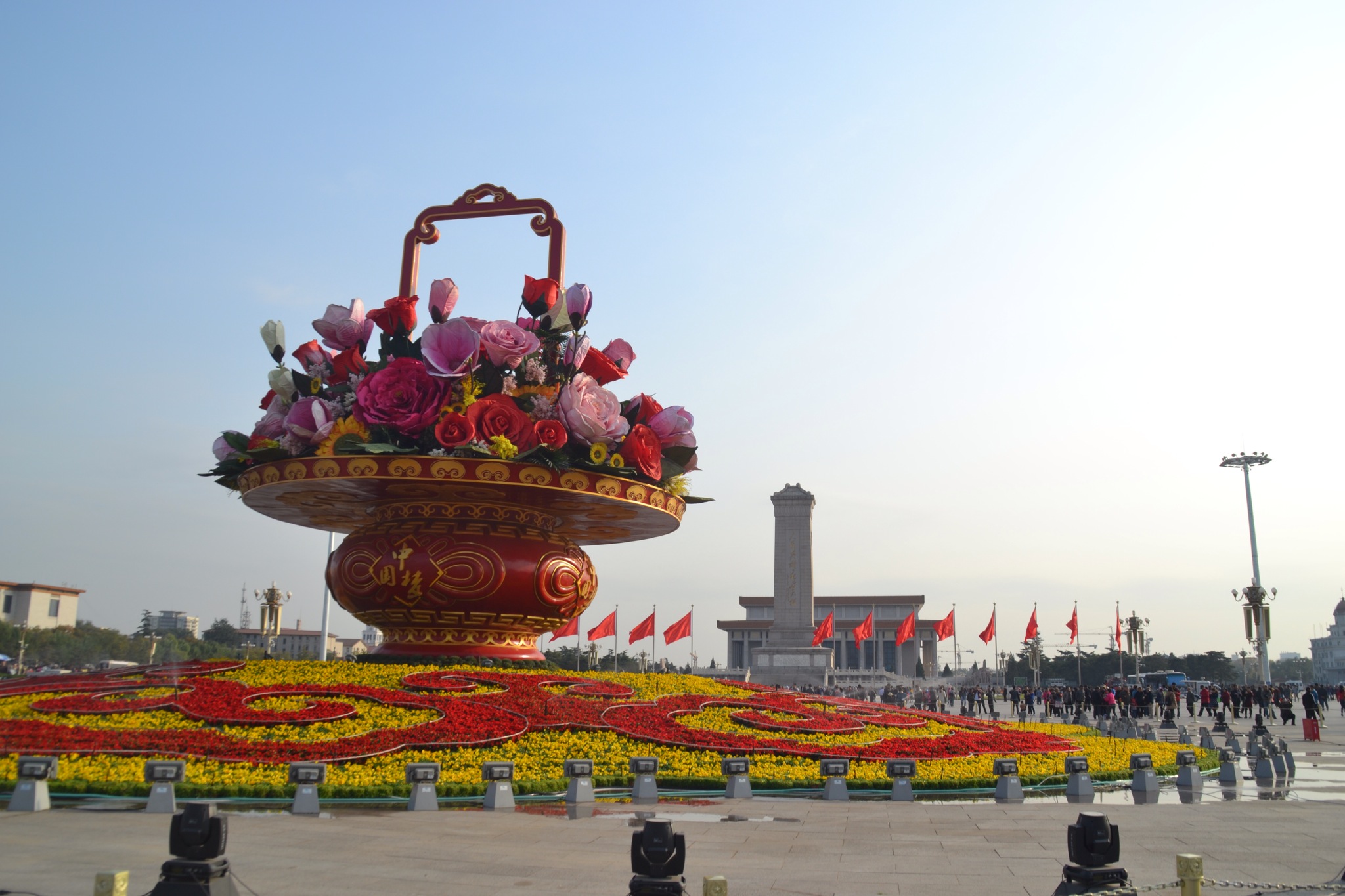 When I got back to the hotel room I needed some chill out time while Dean went to the gym. I decided to put on CNN news to see what was going on in the world. At one point they started reporting on the pro-democracy protests in Hong Kong and then the TV went black. Chinese censorship in action. The news came back when they’d stopped talking about Hong Kong, but Hong Kong came back again. They were sure not to cut it until to had been reported that the Chinese government were condemning the protests, but then as soon as they started reporting the other side of the argument, it cut out again. Of course this is not the only censorship we experienced. Google, Facebook, YouTube, Seatguru (?!), Twitter, BBC, WordPress and countless other websites are also banned in China. The speed of the internet was the worst we have experienced in Asia, worse even than when we were on the Perhentian islands, fairly remote islands with only generators for electricity, and here we were in China’s (largest economy in the world according to one measure) capital city. Presumably the shocking speed is partly down to the firewalls all the traffic goes through.

Our last night in Beijing was also our 10 year anniversary and we celebrated by visiting a craft brewery and eating burgers ….. not very Chinese, but very us. It turned out that the end of our time in Beijing was also going to be tinged with disaster though when Dean ordered what he thought was a beef and tofu burger but it was in fact just a vegetarian tofu burger, oops!